It is impossible to not get into dramatic arguments after marriage.

Maintaining a relationship is not an easy job, especially when you are married. I don’t know what it is about marriage but as boyfriend and girlfriend, you are freer in terms of how you two can fight when you get married the stakes are raised and so are the risk, getting offended can lead to a bigger catastrophe compared to the one if you were in a non-marital relationship. I mean, it is what it is. You did it so you’ve got to live with it. But funny aspects aside, it is often very difficult for even a couple that has had so much chemistry in the past to make it work out. One thing is for sure when it comes to showing or expressing love everyone has their own way or style of doing so. It is a very natural fact that your partner wants to know how much you love them and as a good and responsible partner, you should not waste any opportunity and should show them exactly how much you love them. And it doesn’t have to be done through fancy showcasing and dramatic presentations, it’s the little things that count towards the strengthening of this big bond. Take it like this, if there is something that you like and they like it as well just because you like it, they are yours. If not, you might not have struck that connection yet. I don’t think it can be simplified more than this. And if your said partner is not accepting your love after all the things you have done mentioned above, well then it will be tough to brighten up your mood for a couple of days because their priorities certainly lie somewhere else.

Well, that is exactly what happened with this poor wife who had plans to surprise her husband by cooking this very special dinner meal for him but all he said after being treated to it was that he had to be at his mother’s house and there is a “better” meal waiting for him.

I think you guys already know whose case I am on side of in this one. Let’s just scroll down to go through the whole story and know exactly what happened to come to a conclusion.

Scroll down to read this husband-wife drama!

1. Wives don’t go to such an extent unless they have a very robust rationale so this one is definitely going to be an interesting one.

2. That is not nice, being a husband you should care for your wife’s emotions and even if you want to eat at your mother’s there are better ways of saying that.

Telling her to cook something and then doing elsewhere to eat is very unfair to her. And even if he did want to eat at his mother’s he could’ve made a setting beforehand letting the wife know earlier so she doesn’t cook and they enjoy the meal at his mother’s house together.

3. Even though he would do this thing on a consistent basis, the wife went out of her way to cook a special meal for him and he still had no regard for it. 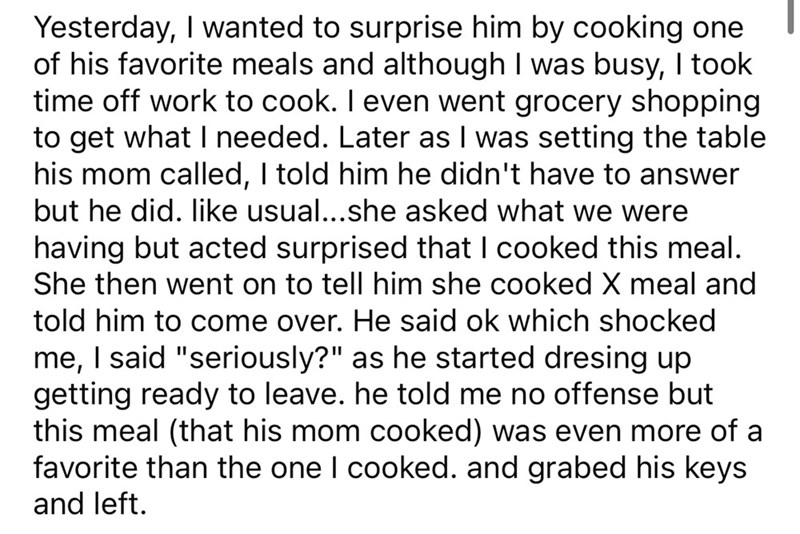 As a married person, your top priority becomes your partner and their happiness. This husband is no husband at all if this is what he does. Absolutely disgraceful of him to leave like this after all his wife did for him, not even a word of appreciation came out of his mouth.

4. So the mother was the real culprit all along and wanted to separate the couple and the husband still wouldn’t understand that. Good thing the wife threw his portion of dinner away because he does not deserve anything that involved her efforts and hard work.

He is just not worthy of it. Going on about how she is 100 times worse than her mother doesn’t make the case any better when his mother was the one who made him angry. 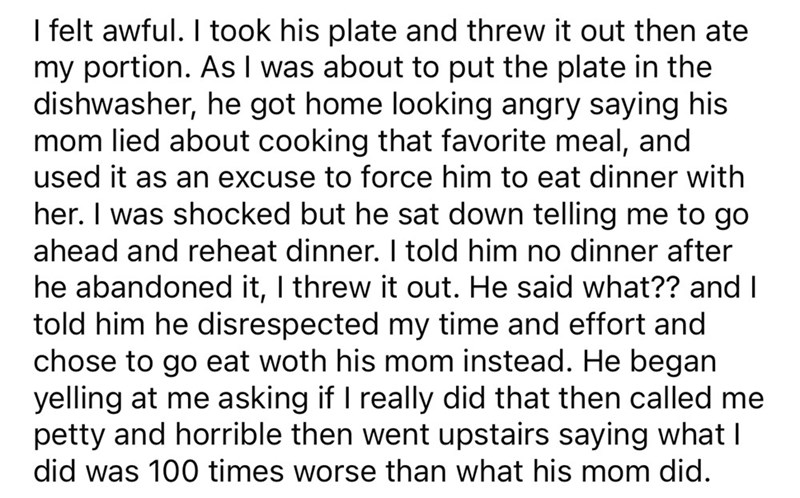 5. Anyone would get frustrated after being treated like that over and over again…and for no reason at all.

6. Her husband keeps switching homes just to eat the better meal…this is not right. This is not how relationships work.

Look. A wife is not the husband’s toy who he can play around with, punch a little, hug a little, sleep with it, throw it away and then find another one. A wife is spiritually attached to the guy and has promised to live with him and be there for him forever. This husband needs to realize she is the one who left her family to be with him while his own mother lives only 10 minutes away. This man is taking way too many things for granted and should realize his mistake before it is too late. I commend the patience of this wife because if I was in her place, I would’ve gone off by now. Disrespecting your wife’s efforts is not healthy at all and doing it over and over again may cause the wife to reach her breaking point (which she clearly isn’t wanting to reach) and that could result in some serious damage to the relationship.

So, no the wife was NTA for throwing the husband’s meal out of the house because he needs to be taught about the sensitivity of this relationship we call marriage and this was one step of many that are needed to be taken by the wife to set the record straight.

Here are some of the opinions shared by the Reddit community on the matter:

7. Damn straight, just don’t cook for him if he doesn’t want to eat your food. 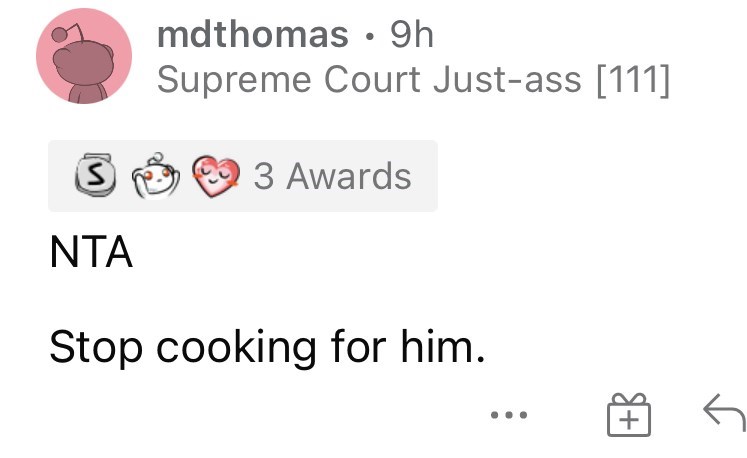 8. And that’s what it should be like. Wives are meant to be respected for so many efforts they make to strengthen the relationship. 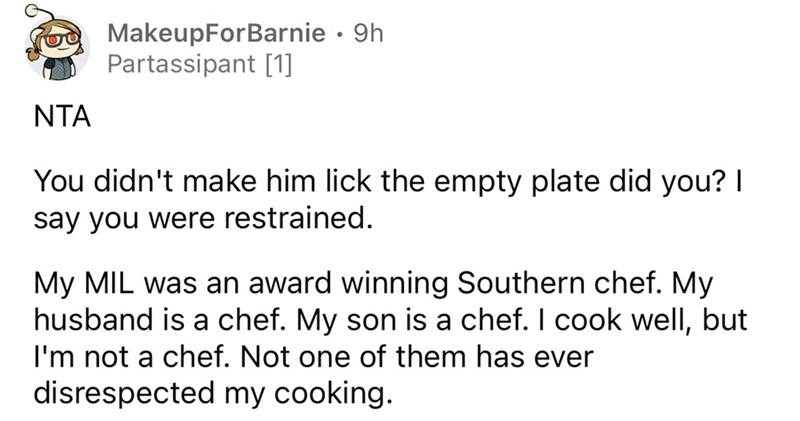 9. It’s not really about the meals, it’s about the disrespect and that is a serious issue. 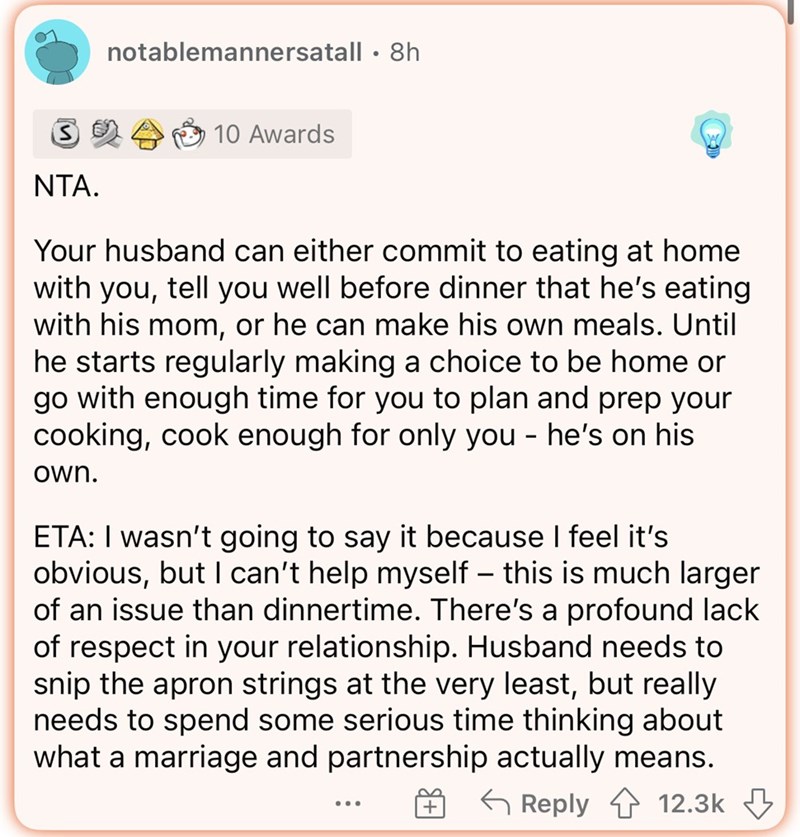 10. You need to get out of that third-person seat and enter into drive mode.

13. The wife needs to be fair to her and value her self-respect.

14. The wife is clearly not his top priority and she should now set her priorities accordingly.

15. I think it is safe to say that the internet was not happy about the husband’s disrespectful actions.

What is your take on this story? Share your thoughts in the comments section down below. Is it okay to ditch the wife and go eat at their mother’s house, for the husband or do you believe the wife deserves more than this.