Dogs are the kindest animals.

They never fail to amaze us with their qualities. Have you ever heard of a dog raising kittens? Nope, that wasn’t a typo. You read that correctly. KITTENS! We came across this incredible and heartwarming story and decided to share it with you. After reading this story, not only will you be surprised to see how this dog took care of orphaned kittens but you will also burst with love for dogs.

An animal rescue which goes by the name of Jelly’s place is situated in San Pablo, California. They found three orphaned kittens abandoned on the street by their mom and managed to rescue them. Since the babies were too small, they needed a foster mother who would look after them and raise them. Luckily Kendal Benken was scrolling through her Facebook and saw the post regarding the three kittens. She immediately decided to foster them as she already had experience in fostering dogs and kittens. Therefore, the rescue approved of her.

Here are the 3 orphaned kittens. Aren’t they the cutest!? 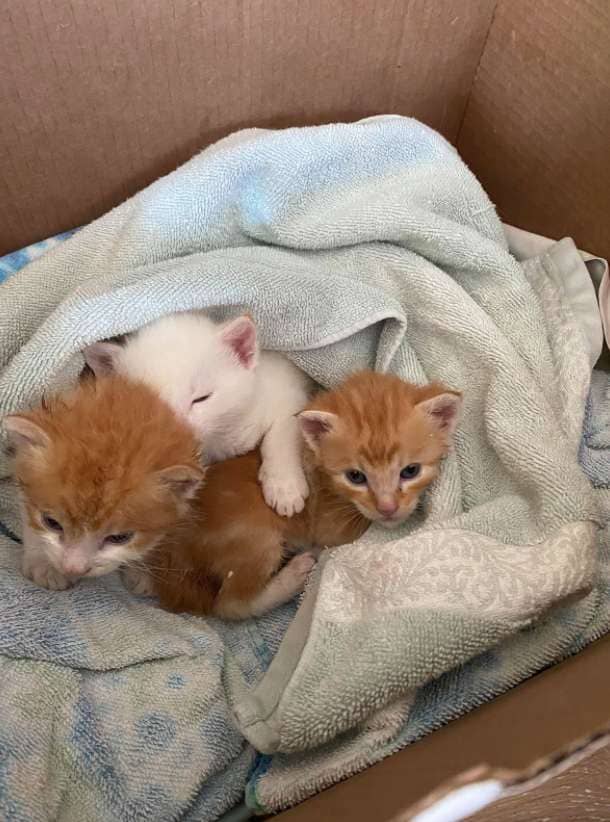 “The COVID-19 outbreak hit, and I was sheltering at home,” Benken told. “I was looking for something to do. Who doesn’t enjoy cute little kittens? I saw it as a great opportunity.”

Well, Benken wasn’t the only one who loved having these kittens around. 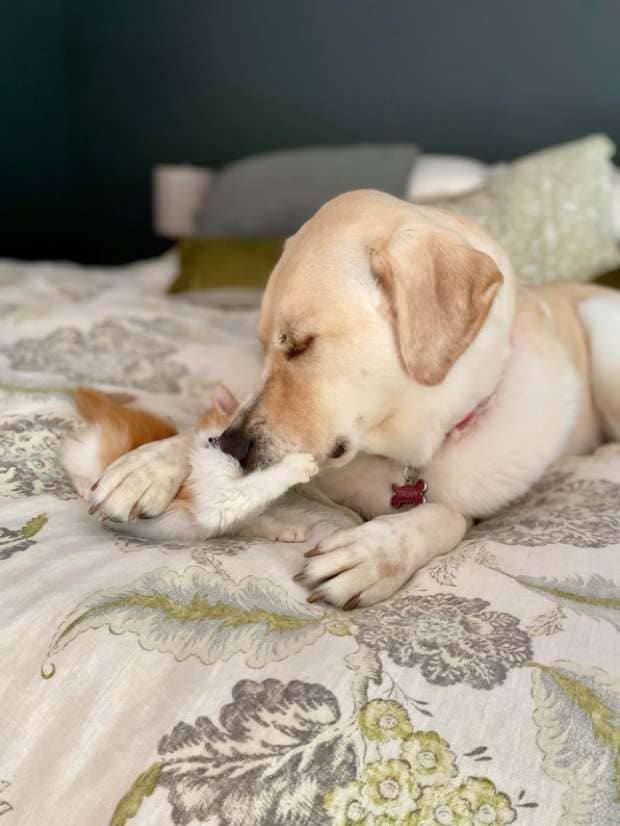 Sadly, the kittens could never receive the love of a mother which is why Benken gave them her best. But as it turned out, this adorable doggo love the kittens and kept them protected as well. 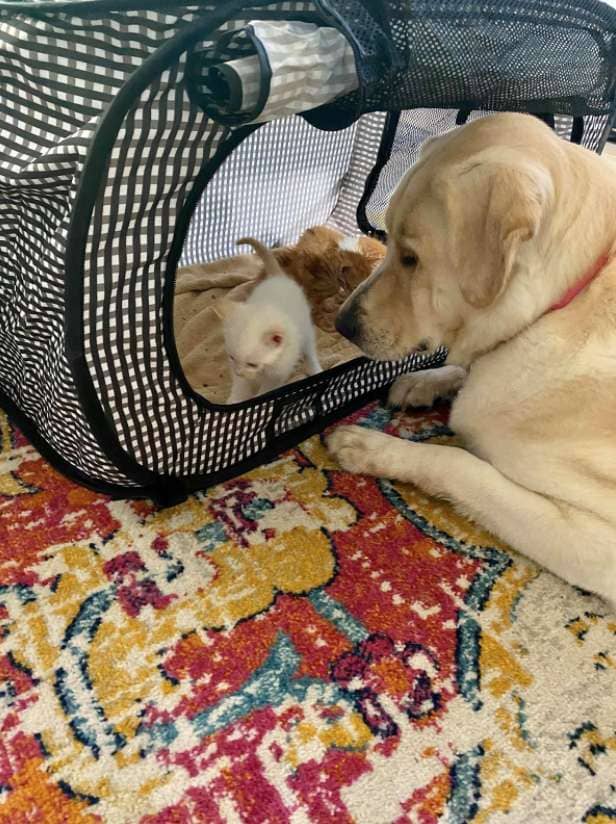 Meet Truvy. Benken’s 105-pound Lab mix. He fell in love with the kittens as well and was willing to take over some motherly tasks too! 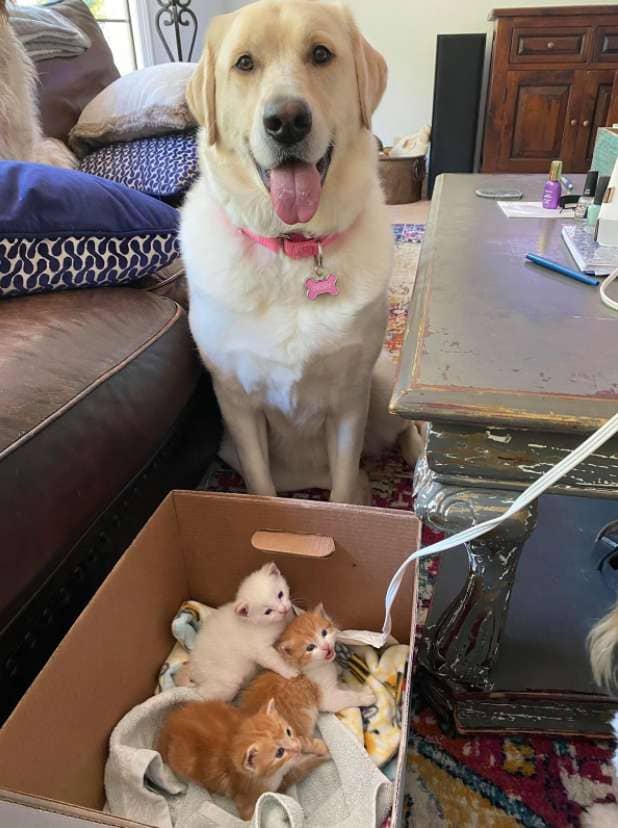 “It’s so funny, when I brought them in she was immediately like, ‘Let me at ’em,’” Benken said. “She took to them immediately. They’re her babies.”

I’m not crying, you are crying. 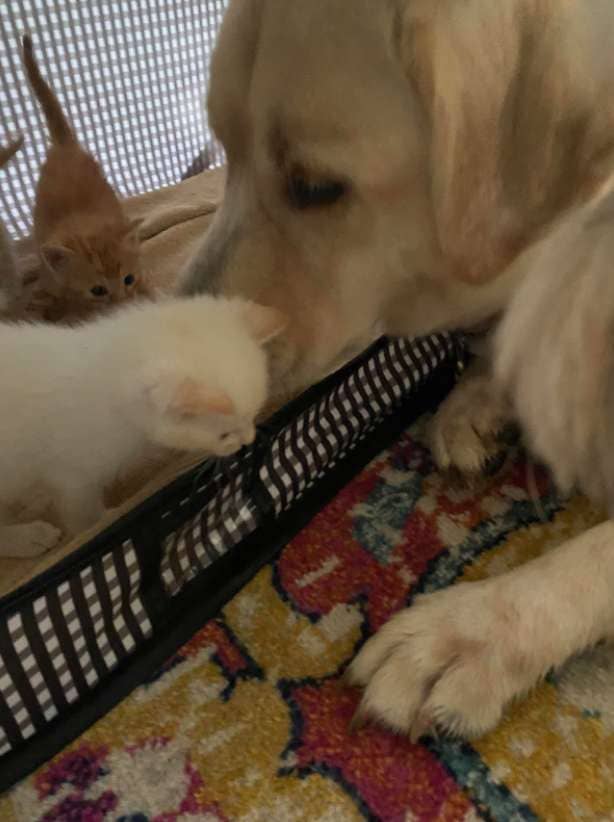 Truvy makes sure to not let the small kittens out of her sight. She sits right next to them and keeps them protected. Not just that, she observes their every move and cleans them regularly too. 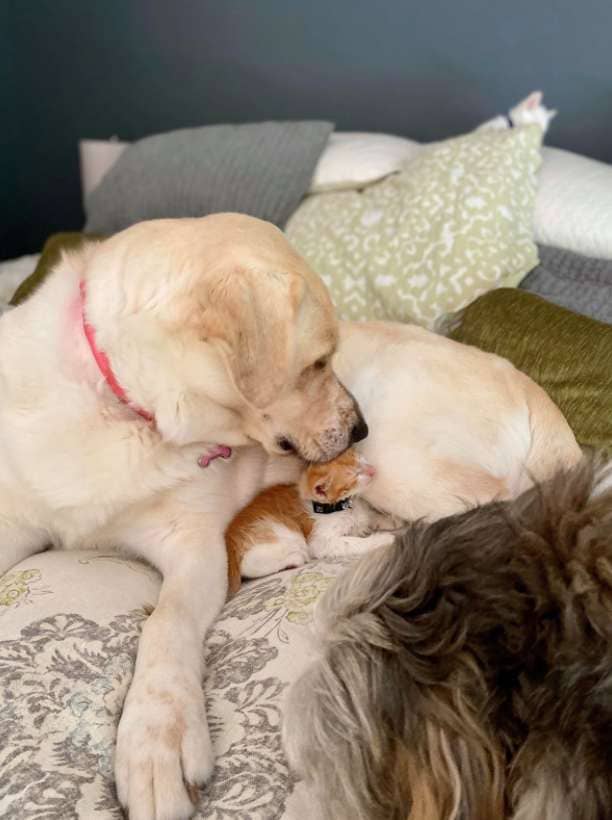 “When I was trying to get the feedings done I’d have to put her out of the room, she would try to manage me,” Benken said. “When I’d let her back in, she would run over, check them, clean them and smell them. She has taken such ownership of them. She takes that role very seriously.”

Let me give you a kissie, kitty. 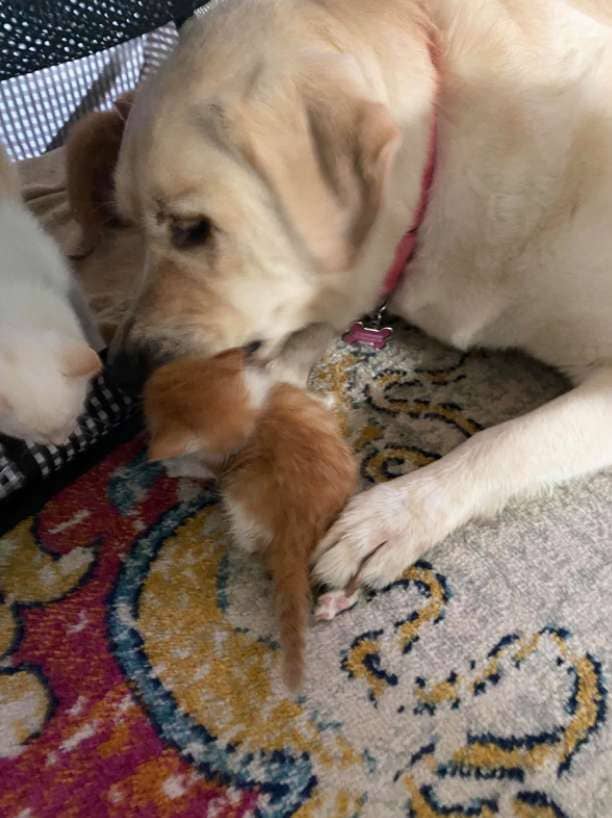 “She will guard them, stand in front of them and push the other dogs out of the way. If another dog gets their nose in there while she’s cleaning the kittens, she will snap at the other dogs. She will give them a stern warning they are hers,” Benken said. 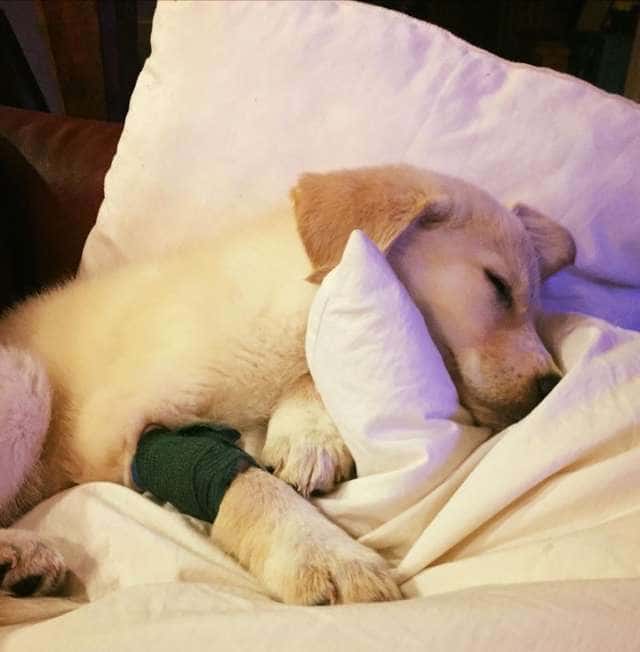 Benken adopted Truvy from a shelter in Texas when she was 5 weeks old. “She’s always been good with the fosters I’ve brought in. She’s extremely patient,” Benken said.

“I find it interesting she has such a strong motherly instinct [since] she’s never had puppies, she was spayed at 6 months old. For whatever reason, she has it. I think it is sweet.”

I’m gonna keep an eye on you, little one. 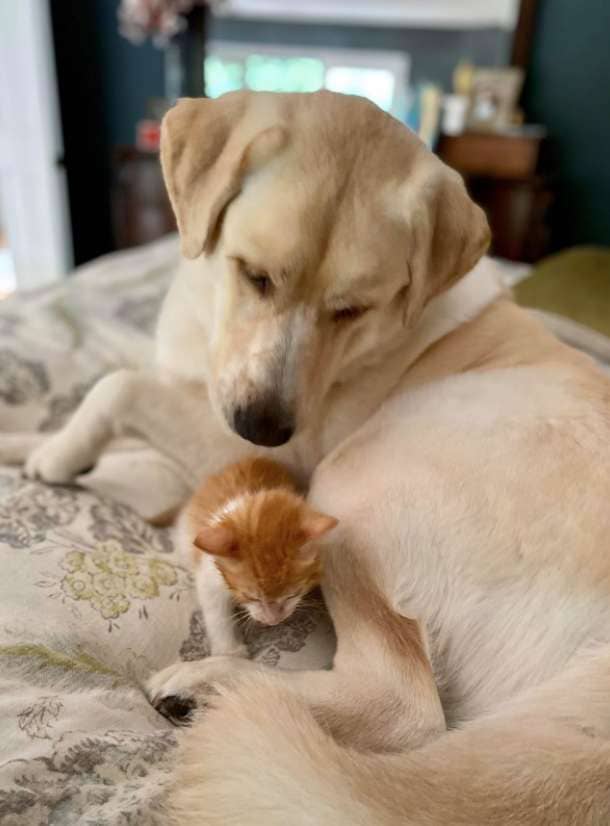 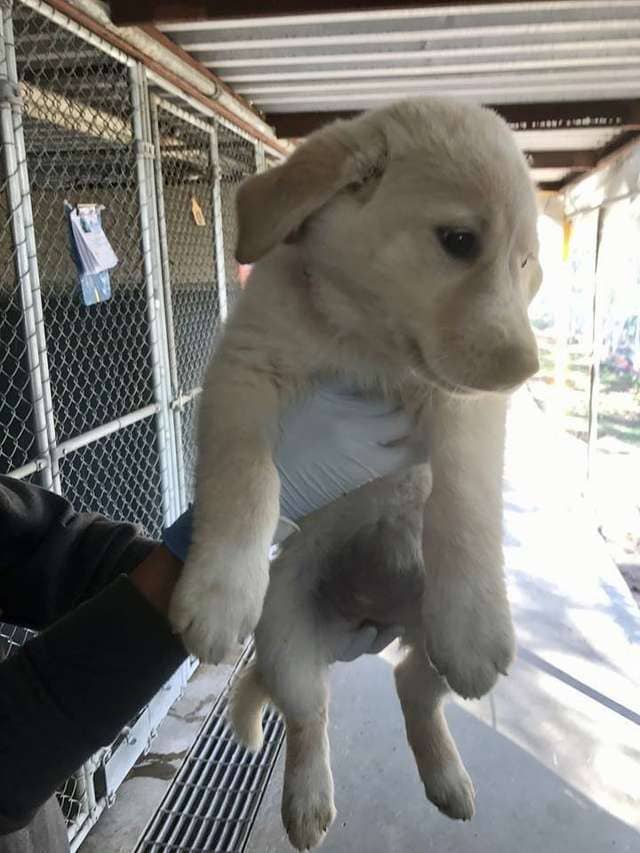 We are happy to know that the three kittens, Ed, Prissy and Louie, will be up for adoption soon. “Truvy will be sad when they do go, but I hope to replace them with a new litter we can foster,” Benken said. “It’s win-win: Truvy gets to be a mama, and the kittens get exposure to dogs. It makes them more adoptable. They’re not afraid of her. She’s always gentle and kind.” 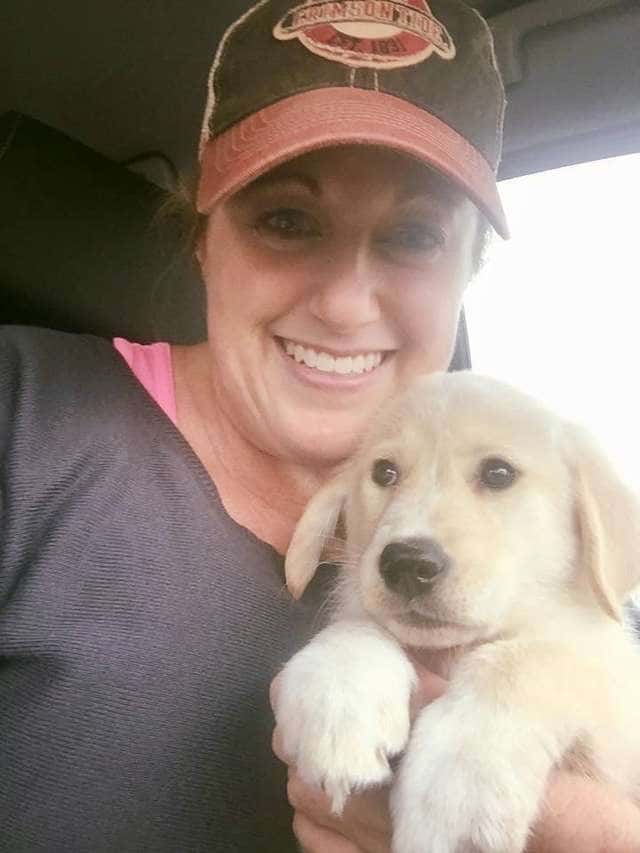 This picture perfectly depicts the special bond that it shares with Truvy. 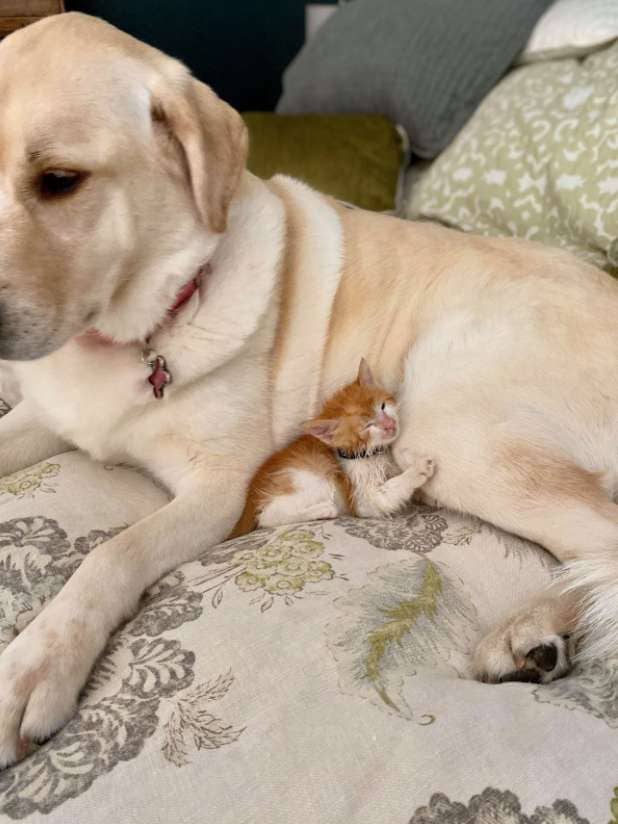 Well, we hope that this story surprised you enough to adopt an adorable doggo like Truvy and give her a new life. Actually, it doesn’t matter which animal you adopt, you won’t be disappointed. But as we said earlier, we’d like to say it again that without a doubt, dogs are one of the kindest animals you’d ever see. What did you think of the story? Let us know down in the comments below!