Have you ever had the unfortunate experience of having your pet run away from home? If yes, then you understand how awful it is. Right?  Likewise, we came across a story of a husky that ran away from home. Later, she was discovered in the woods with a wild deer. Oh, the things she must’ve been through and seen!

The worst that can happen to a family or pet owner is if their pet escapes. Because the thought of one’s four-legged baby escaping the house is one of the worst nightmares for a pet owner.

However, even if they’ve been found, you have no idea when they’ll be able to come back. A woman named Rachel Howlet had a similar experience. Last December, her adorable husky Koda, managed to get out of the house. She kept looking for the husky, but she couldn’t find her. The dog later returned to her home in Manitoba, Canada. Though the doggo pretended as if nothing had happened, what really went down is something we just cannot let go of (in a good way). Let us give you a hint; it involves a wild deer!

Yes, you read that right. Let’s see what happens next. So, scroll down to read the whole thing.

The owner of husky informed the media; “We looked all over for her and she ended up coming home on her own. She’s very smart, so I didn’t doubt she’d find the way,”.

Thank heavens, Koda returned home as if nothing had happened. Later, she came to know the reality of how the pup enjoyed the adventure in the woods with a wild deer. She asked her neighbor if they spotted Koda in the camera, and luckily they spotted the husky.

She was able to safely return home after only a few days of her escape.

The owner checked the neighbor’s installed cameras a few days after her return. 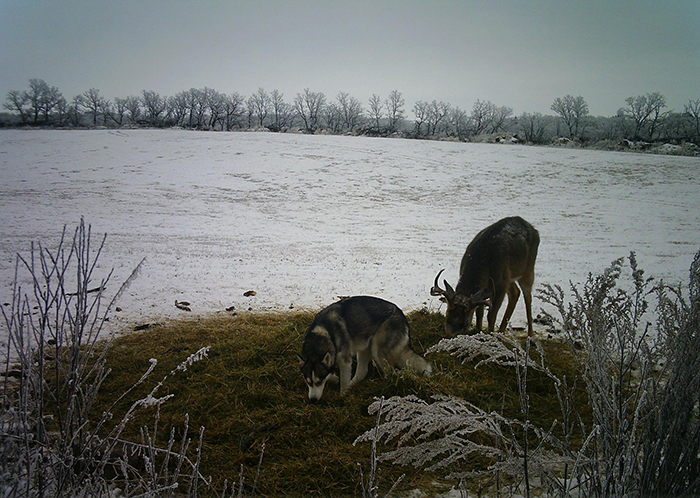 Just to investigate if Koda was spotted or not.

Yeah! She was spotted with a wild deer having best time in the woods.

Surprisingly, they spotted not only Koda but also, a male deer was captured on camera. They were huddled together, either eating or napping. It felt like Koda found a new buddy in the wild woods. The deer didn’t seem to mind Koda’s presence throughout the day, as she played and hung out with them. Interesting, isn’t it?

What we love is Koda’s ability to make friends wherever she goes! We are just glad she wasn’t alone and they both had each other to look after one another!

However, Koda was not the only one. They realized that Koda was spending time with her new pal.

They were curled up either napping or eating together in the wild woods.

We are sure you are grinning while reading this story because we are as well!

Have you ever come across an adorable pair of huskies and a wild deer cuddling up to each other? Or any other animals that just happen to be best friends? If so, do share your experience with us in the comments section below.  Also, be sure to tell your husky-owning friends about this story so they know their huskies can make friends with a wild deer.