Well, a majority of us have always believed that cats and dogs are hardcore rivals, right? But that isn’t entirely true! They do appear to be aggressive towards each other but there are many instances that prove that both the species can have special relationships as well. While cats are known to be the “moody” ones, dogs are calm and humble. If you have a dog and a cat living in the same house, you would know what we are talking about.

However, for the people who always believed that cats and dogs are nothing but mere rivals, we are here to prove it wrong! It’s about time that we change that perception, don’t you think? We have gathered some pictures which clearly depict how a cat and a dog can have a special relationship. Scroll down to amaze yourself;

1. Does it really matter who the big or the small spoon really is.

2. With the winters coming, this is a perfect cozy bed to chill in for the night.

3. They both share such a maternal bond with one another that it melts my heart.

“We adopted a stray kitten a few days ago, Kona has loved playing momma.”

4. A friend in need is a friend indeed.

“I’ll be there by your side no matter what!”

5. The cat is too grumpy to be woken up this early in the morning.

“Snagged this gem this morning.”

6. The kitten is just too tiny for the dog to even notice where it is lounging.

“Is there anything you want to scold me for?”

7. The authority level being imposed on the pup is so cute.

8. Sometimes it just takes time and effort to adapt to your surroundings.

“About a month ago, I introduced my new dog to my cat. Here’s how their relationship is progressing.”

9. Isn’t that such an adorable sight?

10. Since cats are too hygienic, might as well save themselves from getting dirt on them.

11. Friendship comes in all shapes and sizes.

“Maybe it’s the spilled box of toys, but I have the strangest feeling George and Dexter are trying to tell me something.”

13. She just wanna make sure there aren’t any leftovers.

14. This investigation has been taking place for quite a while.

“Sarah (dog) stole a bite of Stella’s food and Stella came running to me in the kitchen to literally complain about it.”

15. Have you ever imagined a cat and a dog sharing such an intimate moment together.

“The cat’s been super anxious from the day we found her on the street and still has her moments, and her best friend Lacey is always there for her in her anxious times.” 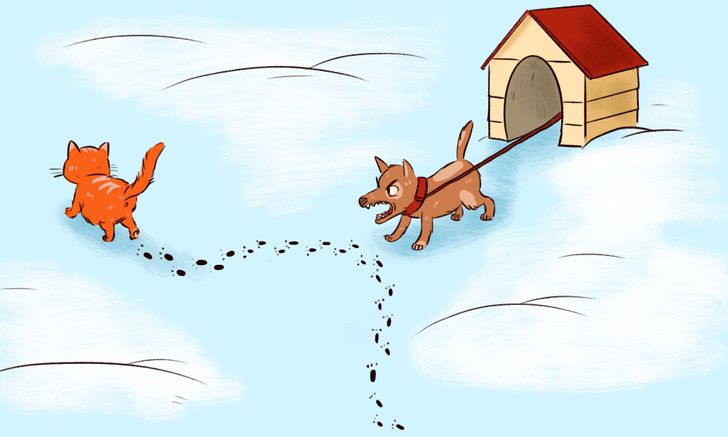 As we have reached the end of this post, we hope that by now your perception regarding the rivalry between cats and dogs has changed. However, we would still like to know your thoughts and opinions in regards to this. Have you ever witnessed a cat and a dog sharing a special bond? Let us know in the comments section below!