What did you think and notice the first time you gave your pet a bath?

Let me take a wild guess. Firstly, if you have a dog, you probably thought how calm they are while getting a shower. I mean, we all thought it would be a hustle. But more importantly, I am sure you must have thought how different they looked soaking wet. Everyone who owns a dog knows how the appearances of our dogs change drastically when we bathe them. They look so shockingly different that it is ridiculous to think that their fur adds significantly to their look. I think more difference is seen in the dogs who have a lot of fur and hair. If your dog has a lot of hair or fur, you must have gotten shocked at how different their size actually is. All that hair makes them look so big and they turn out so small under all that fur.

“I decided to create a series of the different looks and not only personalities but the difference in look from groomed to wet,” Hodson stated on her Facebook page. “We get such great texture on the dog when the hair is wet. Some dogs look completely different when wet and this was the joy I wanted to capture.”

This inspired more photographers which included: Seth Casteel, Sophie Gamand, and Carli Davidson) to adopt the idea and create their own versions of “dogs before and after bath”. 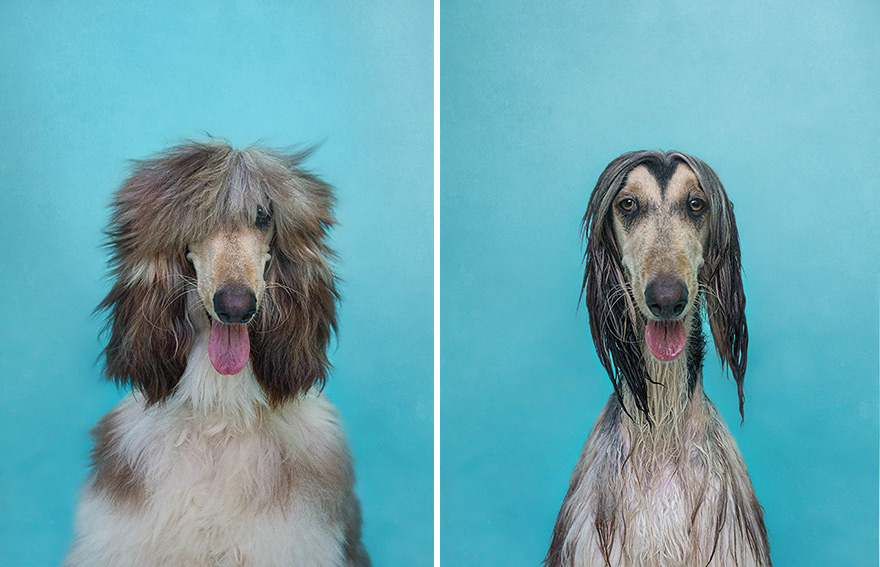 The first picture looks like from his youth when he was into punk and rock music. I can totally imagine him in black eyeliner and a chunky choker. His hair is so full of fluff and so poofy, you can’t even see his eyes. While the picture prior to jumping into the water is so edgy, the picture after showering has changed his look fully. Suddenly, he looks at the oldest age a dog can be at. Life has been sucked out of his eyes and he is sticking out his tongue in exhaustion.

2. I just came back from the wild! 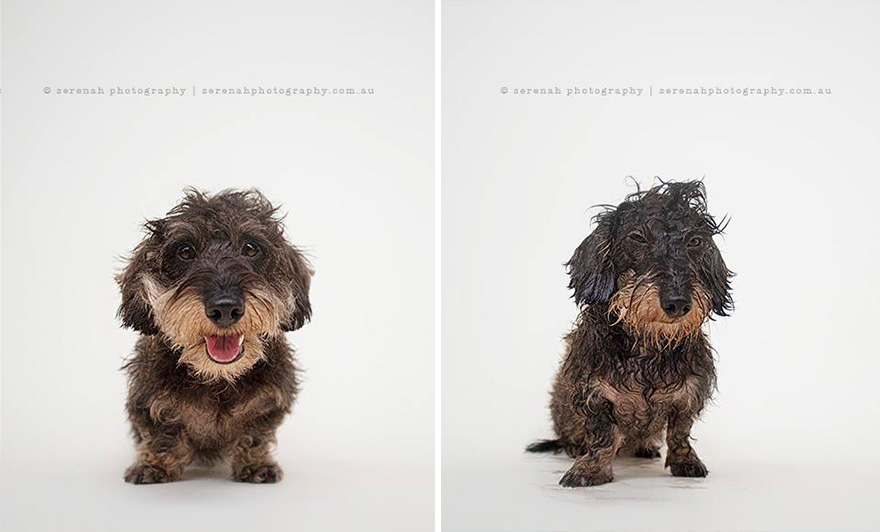 This is such a cute little dog! He looks so full of joy and life in the first picture. It feels like he has made it a life goal to cheer people up with his energetic persona. On the other hand, his outlook after bath makes him look like a whole different dog is placed in front of us. It looks like he was rescued after spending a long, harsh time in the wild. Given that he just showered, it is ironic that he looks like he has not showered in ages. Damn, that is rough!

Oh wow! The amount of volume his hair has! Even my thick hair is not that voluminous. While it looks like he does not even have eyes in the first picture because of all the hair, the second picture has everything but hair. His hair has lessened in volume vastly.

Can we all agree that this dog resembles a willow tree? He definitely has hair extensions because there is absolutely no way that her locks are that long and magnificent. I love that little ponytail above her head! It looks like she has a personal hair groomer who does her hair every day. This dog looks just as beautiful soaking wet.

5. My tail never goes out of style!

If anyone wants to have post-shower body goals, this big guy is serving the looks for it! He looks just as stylish after bath as he did before. He is the sassiest dog in the neighborhood! 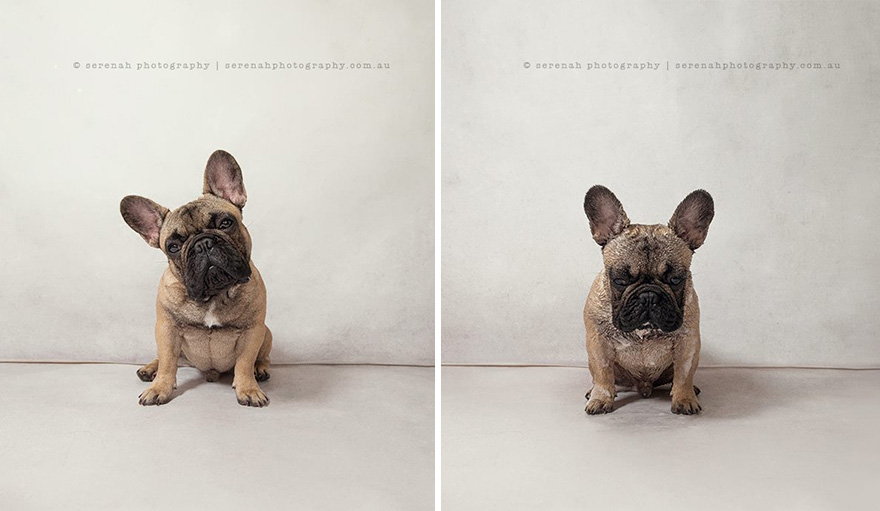 The only thing that changed in his look is his mood. He does not look happy with his shower and wants to be dried right away! So, you must be careful while giving a frequent bath to a pug, if they don’t like being showered, you must not bathe them regularly. Try to keep them into a clean environment so they don’t get dirty.

The first picture looks like the dog was dressed up in the 1700s when men would have their hair styled in a fancy manner! He looks so elegant. On the other hand, the second picture makes him look like he is in a completely different era. The dog’s hairstyle changes significantly after showering!

A majority of dog owners get confused as to how often should they bathe their dogs? While our adorable puppers don’t need to be cleaned every day like us, however, they do need regular baths. But the question is, how regularly? Well, that entirely depends on the type of environment your dog is in and the type of your dog’s coat as well. Mostly, giving a bath to your dog once a month would work in most cases.

In the end, we would like to say that Serenah Hodson is an absolute genius to come up with something like this because these series are so fascinating! It is so fun and entertaining to see how a dog’s personality completely changes by merely taking a shower. I think it would be fair to say that they look like completely different dogs. One dog even looks like he is from a completely different time period in the first picture in comparison to the second picture. Before and after pictures are our absolute favorites. Whether it’s a dog growing up or a picture that shows the happiness of a dog after being adopted, these kinds of pictures never fail to amuse us!

Does your dog look different after bathing too? Let us know in the comments and share your dogs’ pictures!