We all love food. But a lot of it can lead to some major problems.

Food is life. I mean that in a literal way. It is a means for survival. You can’t live much without food. But, in no way does that mean that we start eating it all the time. Uncontrolled consumption of food can backfire at times. You could have digestive issues, stomach infections, or you may start gaining weight. Now I realize, when it comes to weight, everyone is superconscious. And no, I am not just talking about humans, we’re discussing animals here as well. Yup! Consciousness flows all around. We all care about looking good. And so do doggos.

The thing about gaining weight is that it’s a very slow process and is easily detectable until after the damage is done. And the damage is usually identified when your favorite shirt doesn’t fit you anymore. And then you run towards the weighing machine, step on it, and the realization becomes a reality.

Today, humans are not the subject of this conversation. It’s a dog. A cute boy who loves food.

A young Labrador named Drax who lives in Queensland, Australia, caught the eye of internet users when his parents posted a super funny picture of him stuck in a door. 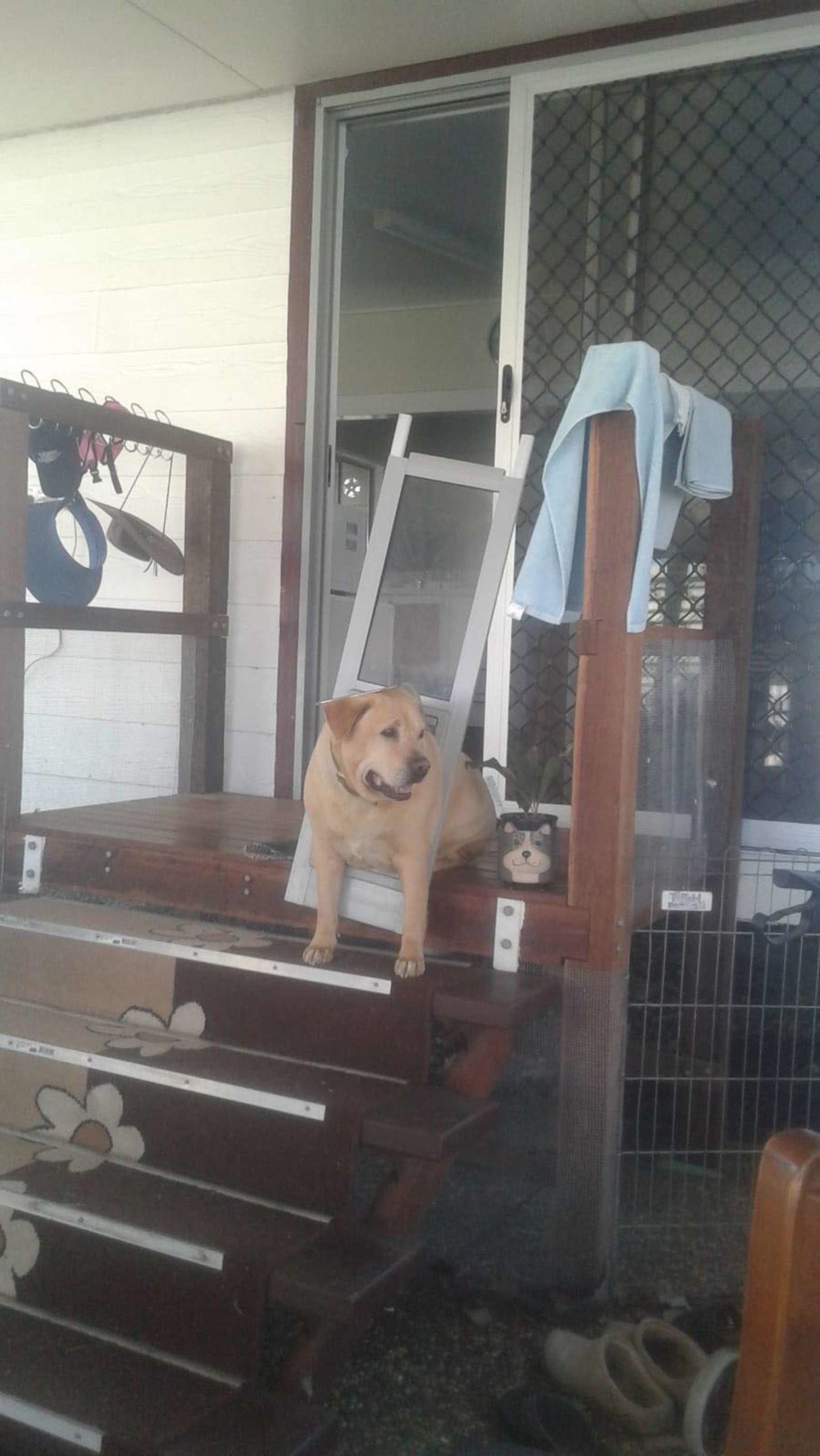 Drax wasn’t always this chunky. He was actually rescued by Charmaine Hulley’s sister.

She was quick to notice that Drax was not in a good health at all, and looked malnourished. There was no decision to make, and Hulley’s sister brought Drax home.

In an interview with The Dodo, Charmaine said, “My sister found him outside her local supermarket a couple of years ago just laying there curled up. He looked skinny and uncared for. She put him in the car and he just froze with fear and wouldn’t look at anyone.” 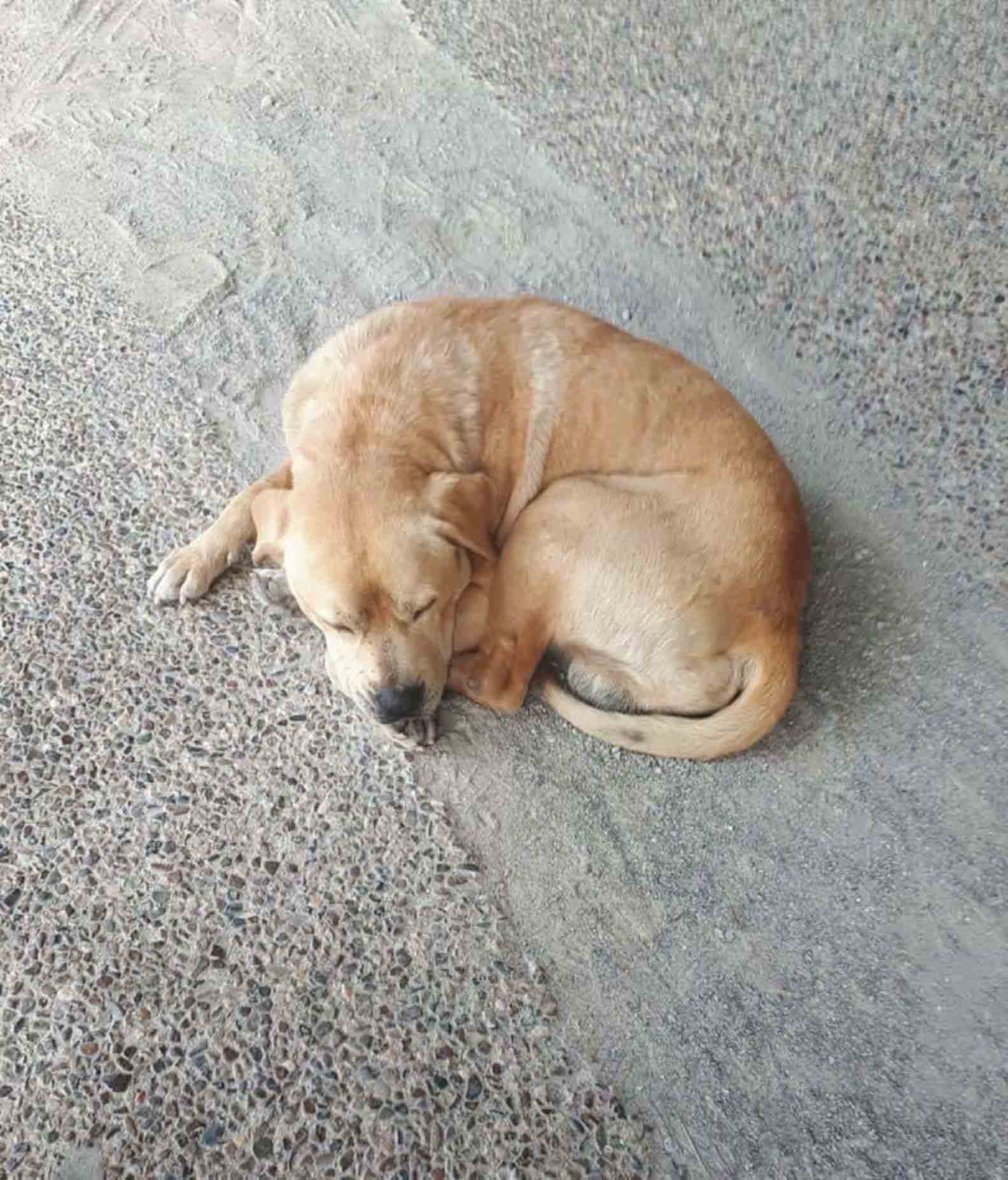 According to Charmaine, Drax was a settler.

He quickly bonded with her and her family that included 1 sister and 4 other dogs. Drax was very cohesive and extremely happy to be part of his new family and was ready to enjoy his life chilling with his mates.

“He’s the most placid dog you could come across,” Hulley said. “He’s the most loving and happy and laid-back boy that just adores all other dogs.” 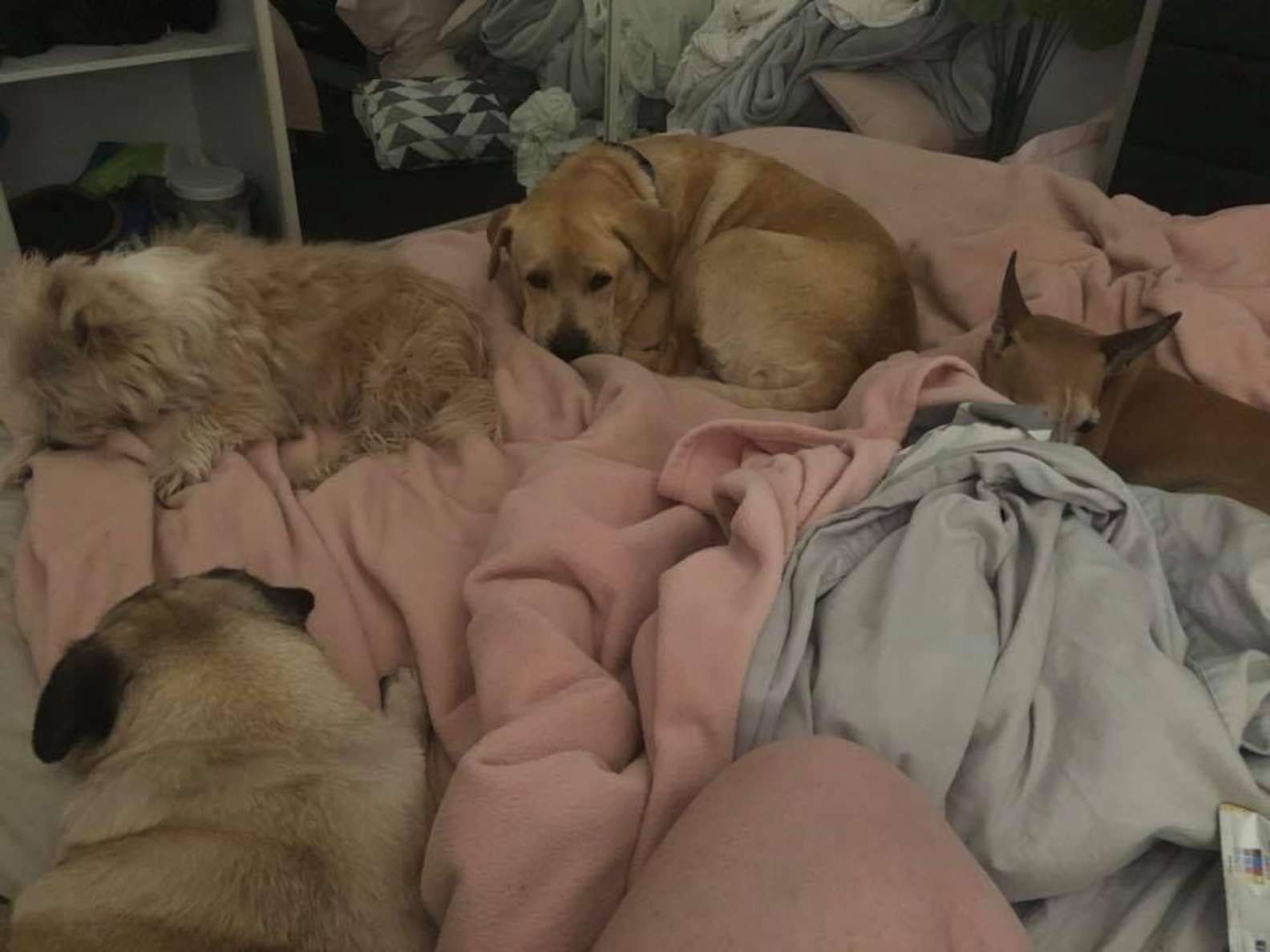 Drax loved his little brothers and sisters and would play with them all day long.

It felt like a perfect family. 2 sisters and lots of dogs, what could go wrong? Well, Charmaine had some worries. He was soon to leave her sister’s home and move to her own home. Hulley was so attached to Drax that she didn’t want to leave him behind. But the thought of separating Drax from the other dogs was daunting for her as well. He could be negatively impacted by being alone. So she decided to adopt a doggo brother for Drax. 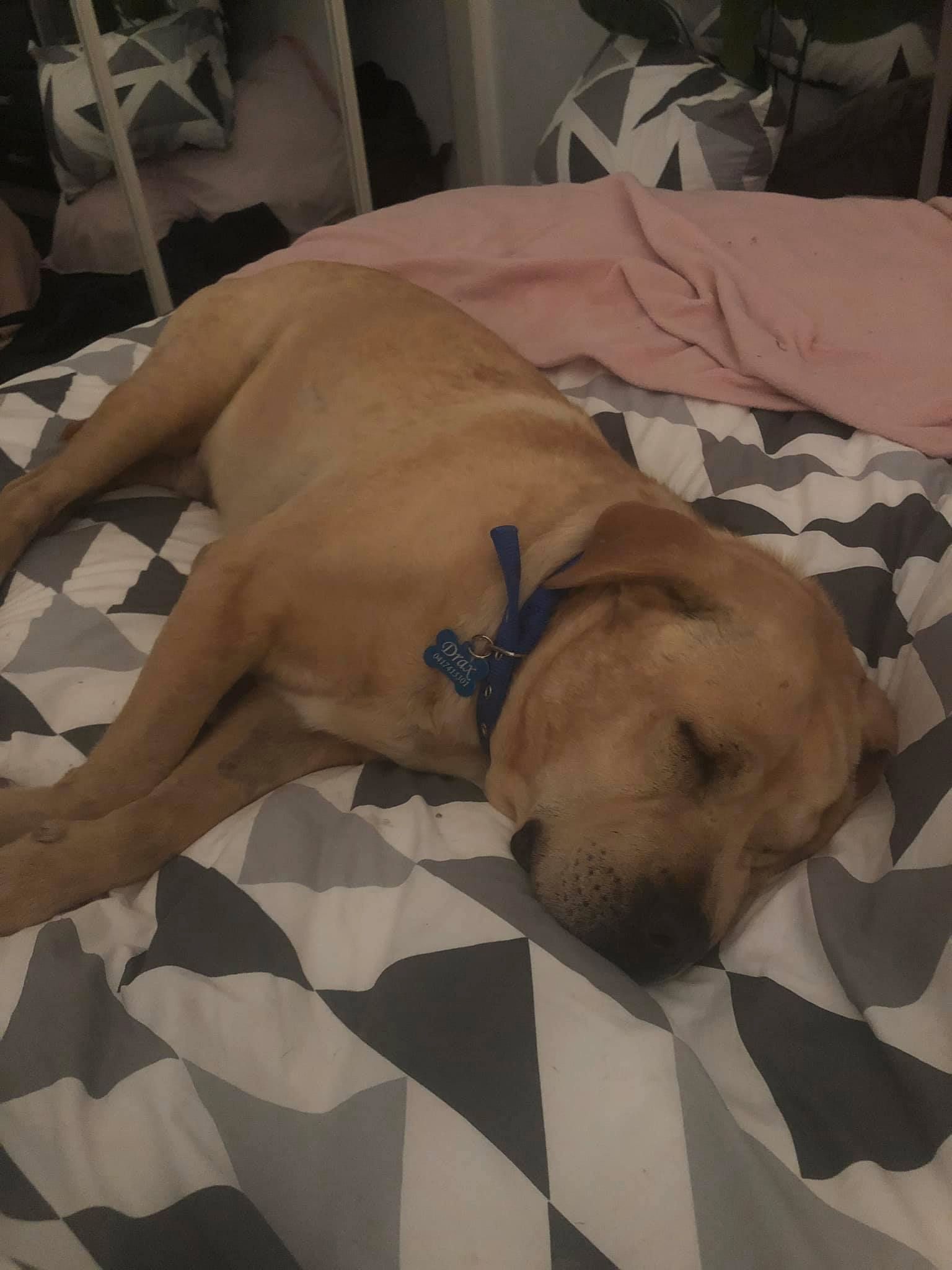 A few years later, Charmaine returned to her sister’s house.

She brought Drax and his brother along as well who were super excited to be there. The duo rushed to start playing with Drax’s brothers and sisters who he had missed so much.

He was in pretty good shape until a very important realization that was going unnoticed. After playing in the yard with his brothers and little cousins, they decided to go back into the house. Drax decided to follow his cousins who jumped through the doggy door. But when it was Drax’s turn, he made the jump and got stuck in the door. An alerting moment for both Drax and his Mommy, he had put on some pounds. 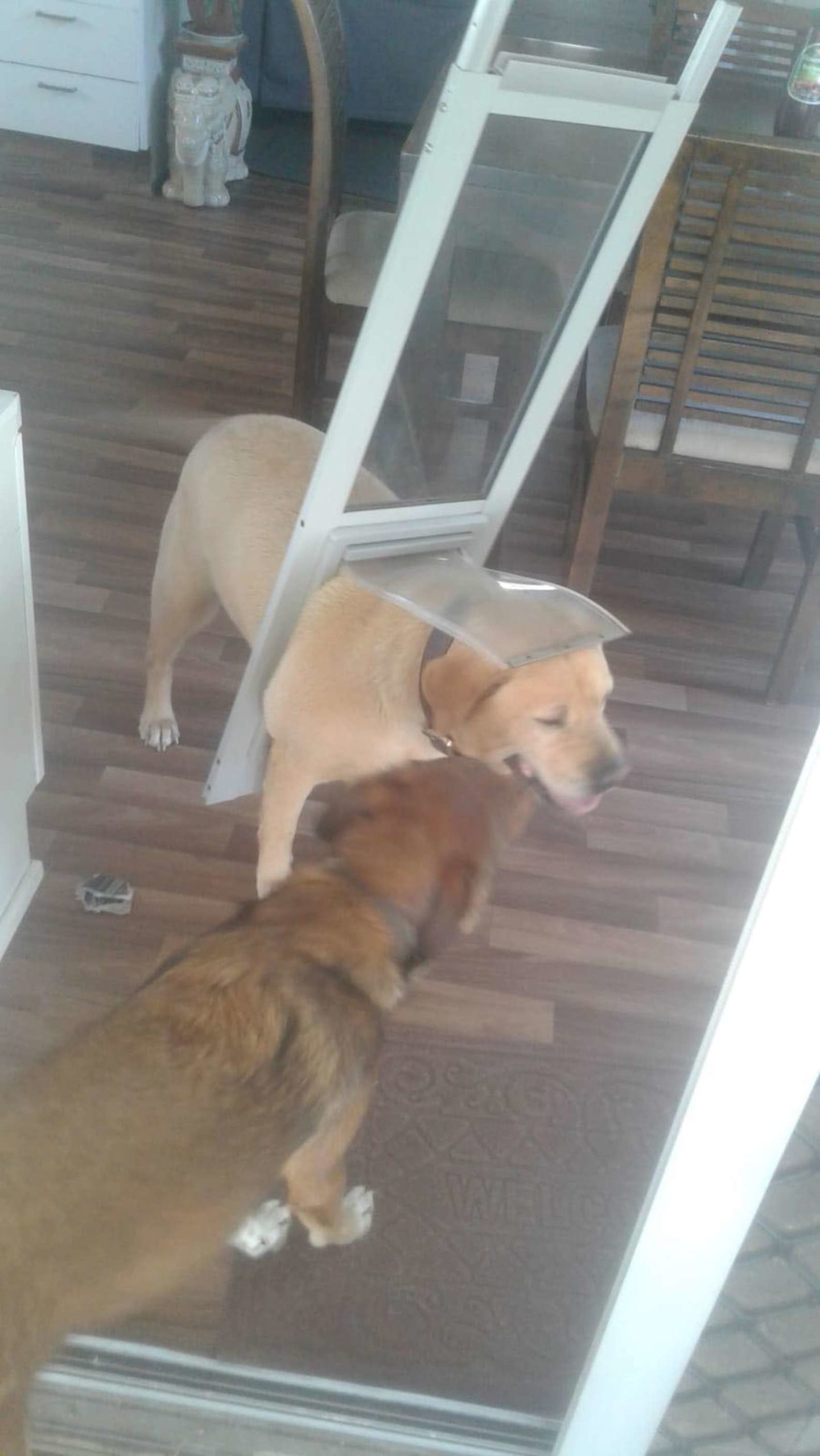 Took a little while for Drax to process what had happened. But he soon got very anxious and used the brute force that he had gained in the shape of weight. But instead of escaping the door, he ended up breaking the entire door off the hinge and brought it along with him.

Charmaine did admit that she gave Hulley lots and lots of love. More than the usual. But unlimited love should not be associated with lots of food. 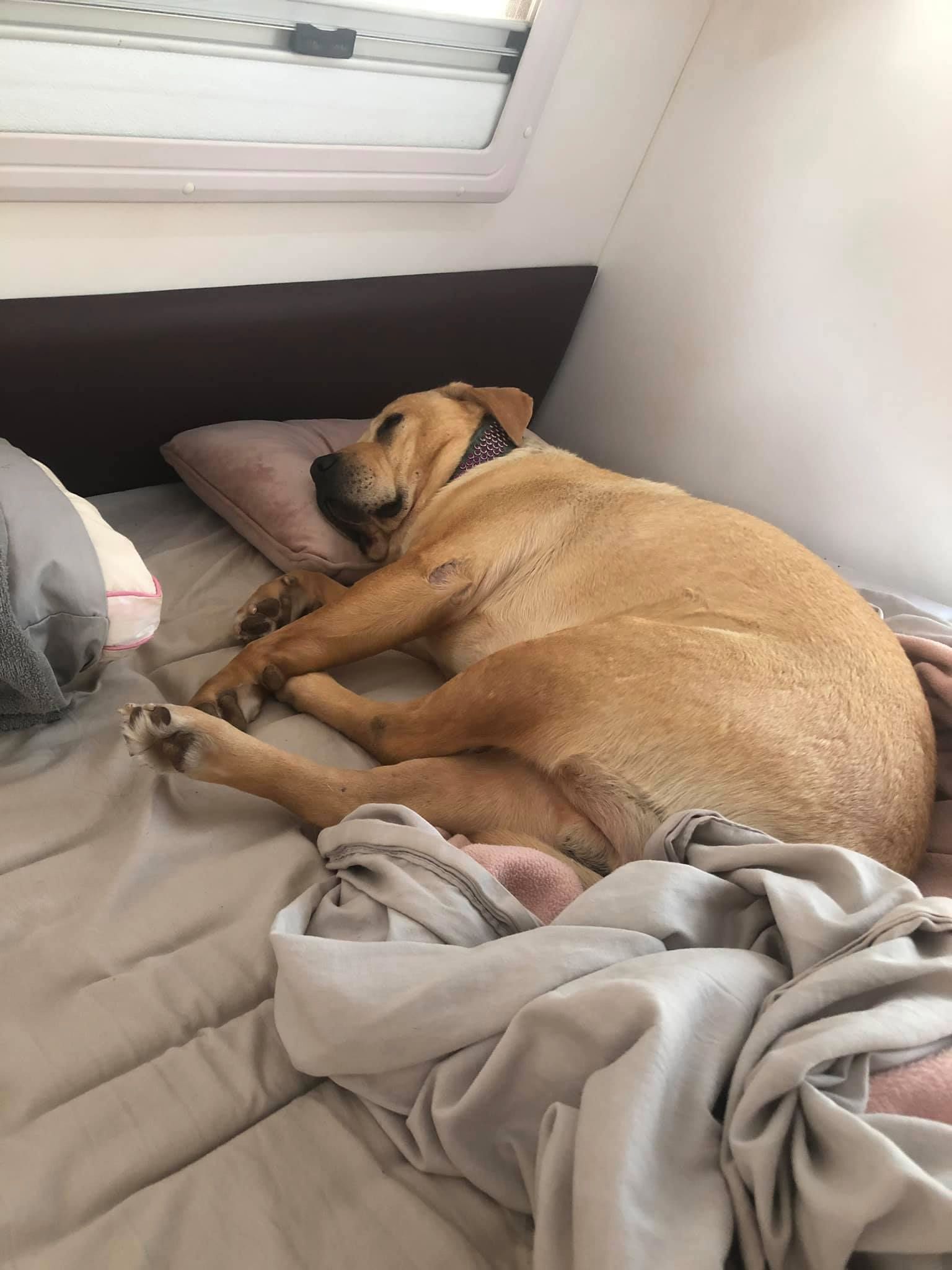 She added, “Dad came home early and saw half the doggy door panel on the ground and looked inside and Drax came wandering down the hallway very casually with it on him. I looked over and Drax was on the stairs looking at me…my mouth dropped.”

We do see the funny side of this story, but what’s more important is the realization for Hulley and the family that the doggo has been spoiled beyond limits, and close attention needs to be given to the matter. 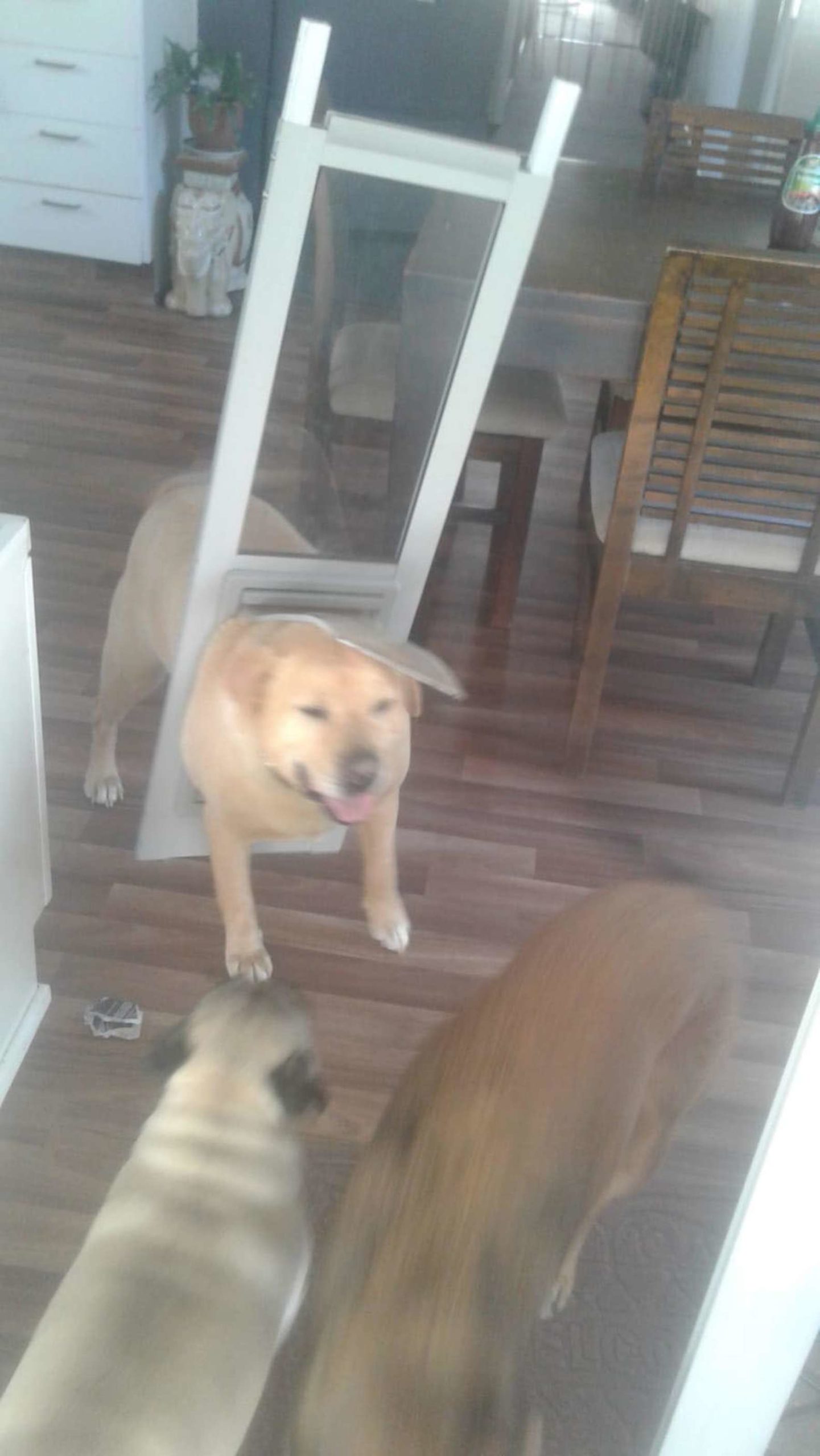 Realizing how Drax’s bad health was made the family rescue him, putting on weight could potentially take him to that same old condition again. So, they decided to put him on a journey. A journey not too easy, but for Drax’s own good. A journey towards ideal health and fitness. 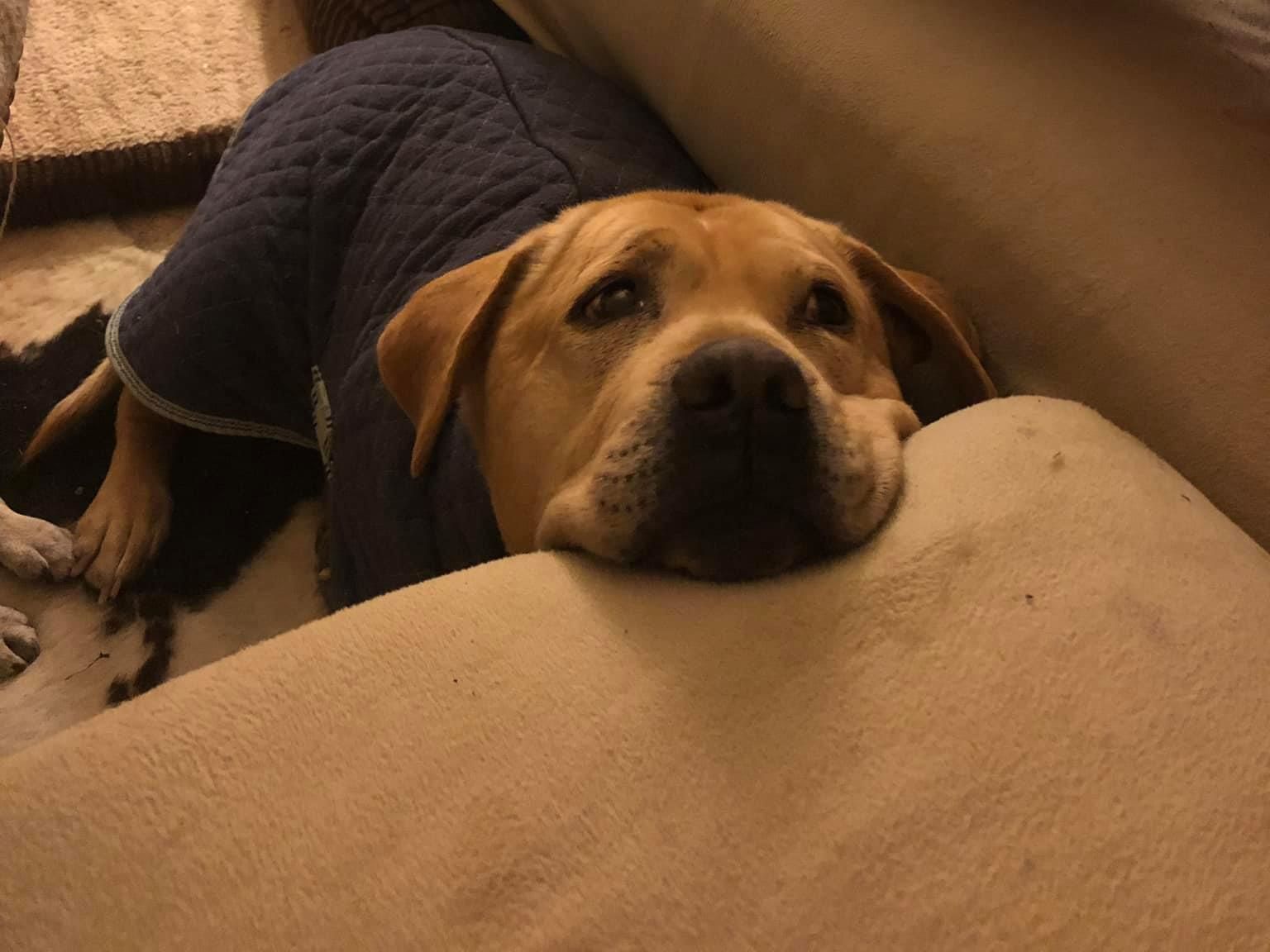 We wish Drax all the best on his tough journey towards great health. It’s not gonna be easy to stray away from crispy chicken and get closer to veggies. We’re rooting for you little doggo. Let’s show the world that you can fit through any doggy door in the world.

We hope you guys enjoyed this story. Leave a like and share your thoughts in the comments section down below.