Families are no doubt a huge blessing for us. They are the ones who stand by our sides during our difficult times – and you can have a free babysitter! It’s fine to drop off your children at your parents’ or sisters’ homes when you don’t have anyone else to look after them or when you have to attend a party at a friend’s house. However, there should be some limitations. Having boundaries is a very important part of any relationship. Be it with your parents, sisters, or spouse. Boundaries are what make the relationship stronger and healthier. If you won’t set them from the beginning, then there comes a point where you start losing faith, trust, and loyalty with your loved ones. There comes a point where your beloved ones start feeling frustrated and then they will avoid meeting you no matter what.

As in this AITA post, the OP’s sister dropped off her children at the OP’s house despite the fact that she had declined her sister’s offer to care for her children due to her hectic exam schedule. What OP did next enraged and frustrated everyone in the family, including the sister

An AITA post was shared by a sister who was asked to babysit the kids on her exam day. 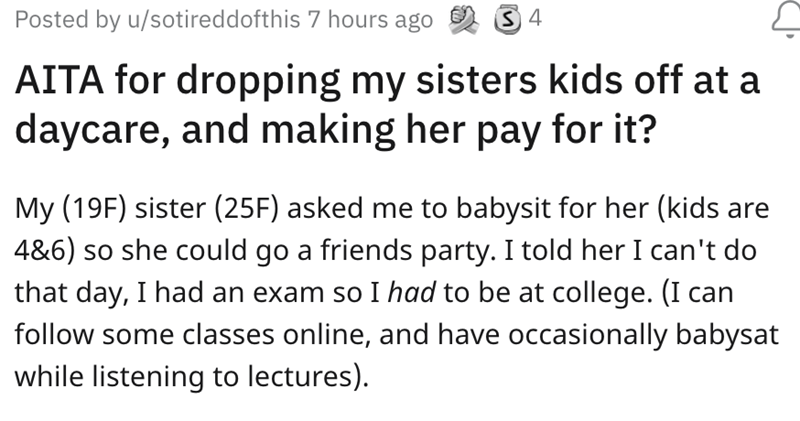 Despite saying no to babysitting because she had an exam that day, the sister still dropped her kids off at the OP. 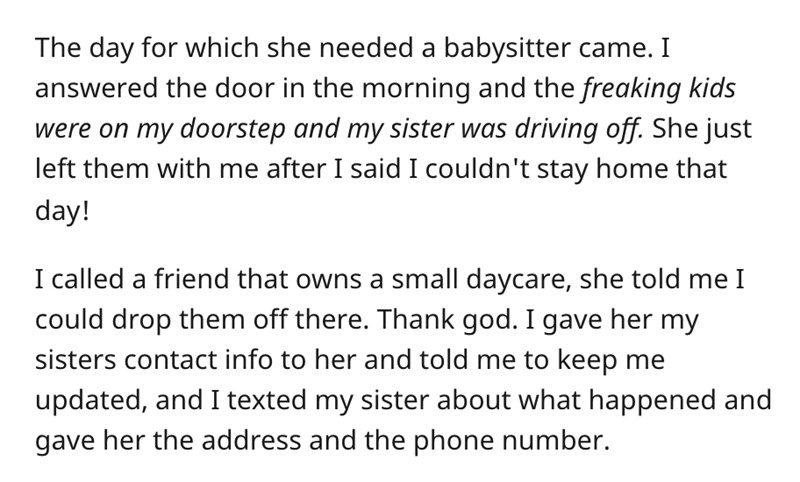 Later, the sister and her family were upset because the OP had to drop the children off at daycare. 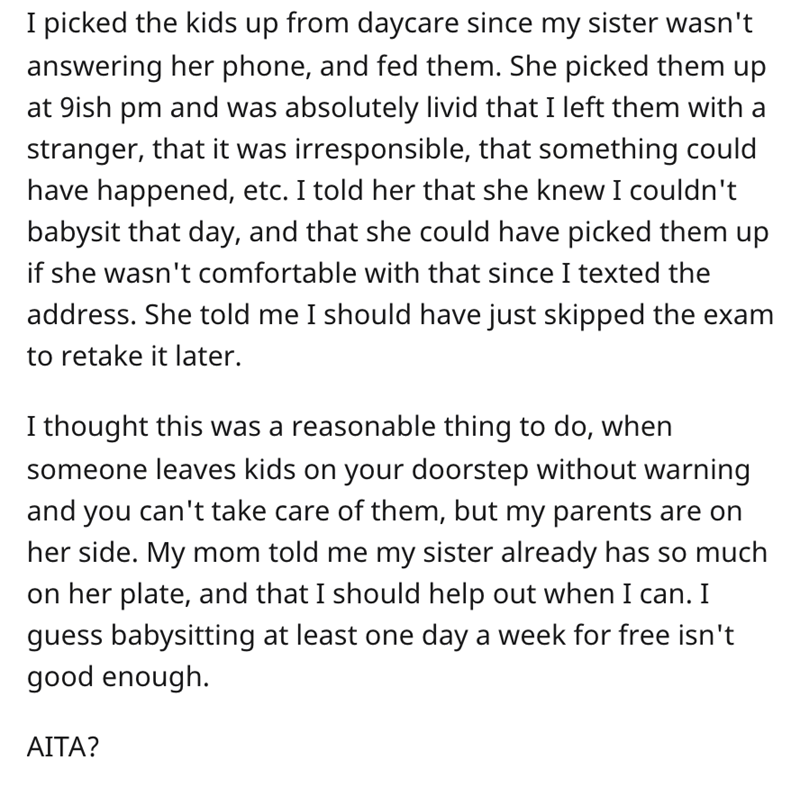 It’s completely fine to babysit the children of your family. But what if you denied the request and still see the kids standing at the door and your sister driving off to the party? And you have to leave for college for your exam? That’s quite frustrating.

Because the daycare was owned by a friend of the OP, whatever she did was perfectly acceptable. She knew who they were, and in the end, the kids were able to return home safely. Yes, if the OP drops off the children in an unknown location or with a group of strangers, the family’s frustrations may be justified in that situation.

Having exams on the same day as having to babysit can make for a very hectic day. It is perfectly acceptable to retake the exam, but doing so is extremely risky. What happens if the person fails the exam and is unable to retake it later on? What this OP did appears to be totally alright, and it appears to be exactly what daycares are intended to do. Because of their hectic schedules, parents can drop off their children at the daycare without any stress and can spend a hassle-free day ahead.

However, there are many strangers on the internet who are supporting the OP, stating that what she did was correct and that she had the right to refuse her sister’s request. When it comes to strangers, on the other hand, there are very few who are speaking out against what the OP did.

Let’s see what strangers have commented on the OPs post!

Have you ever been in a similar situation? Let us know in the comments area below!