Karens are no laughing matter, and hearing the words “may I speak with the manager?” is one of the most terrifying things that can happen to any manager. Karen’s arguments have generated a lot of discussion on the Internet. Karens are sometimes referred to be those who are persistent in their requests to talk with management. Regular servers, retail employees, and anyone else that needs to deal with them no longer have an issue with them. It is, nevertheless, the manager’s responsibility to find a solution. Karens can be difficult to cope with at times. This week, the r/DontWorkHereLady subreddit received a new post from user u/alannahmyles. Following a fire at a drive-thru restaurant, a woman, a ‘Karen’, was determined to get her lunch from the same location, no matter how much the restaurant had been damaged. She ordered a worker who was there to put out the fire to get her a meal. When the firefighter pointed out the obvious, that the restaurant is in complete ruins, she immediately went into Karen mode and demanded that she be served with a meal no matter how bad the condition of the kitchen is!

Karens are a nightmare. And as a result of the internet’s cultural influence, the name Karen has come to be linked with someone who is entitled and disagreeable. Karen’s behavior appears to be unwelcome and downright unpleasant by the majority of people, despite the fact the majority of people appear to be addicted to the stories. As a result, we’ve put up this Karen tale for your enjoyment. Read about the most strange interaction between a Karen and a firefighter!

1. What did this poor man do to earn a Karen?!?
Advertisement 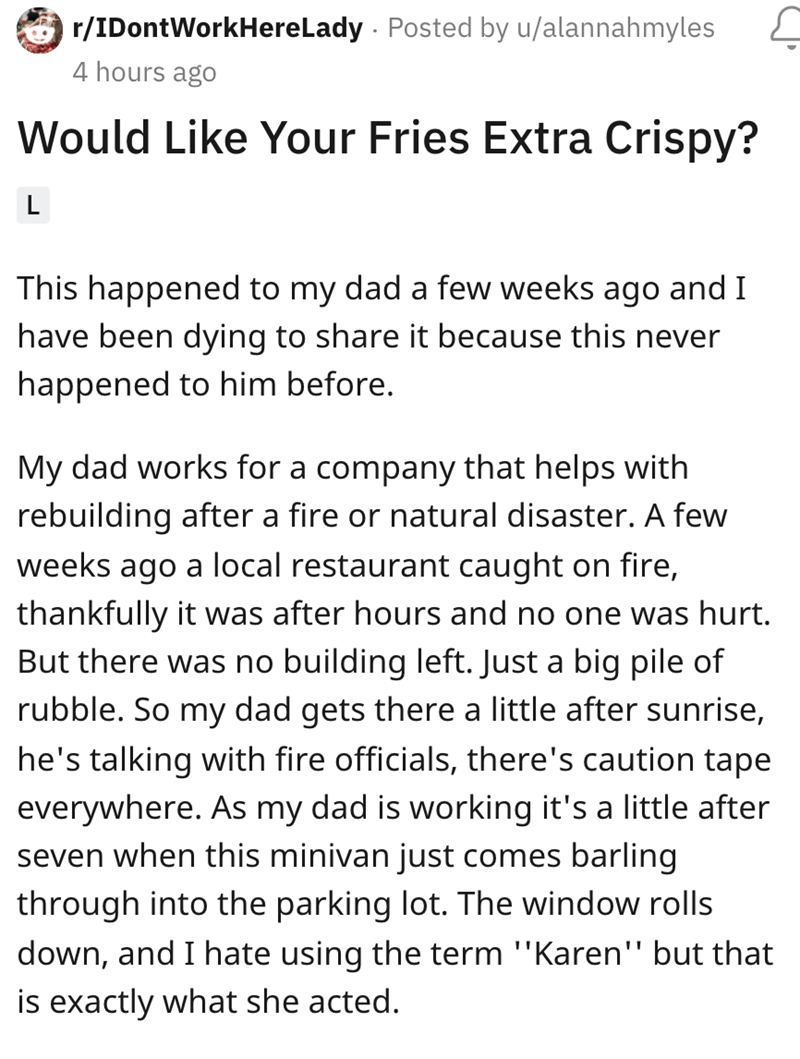 2. “A real complicated coffee order that only a Starbucks barista is capable of making”?! 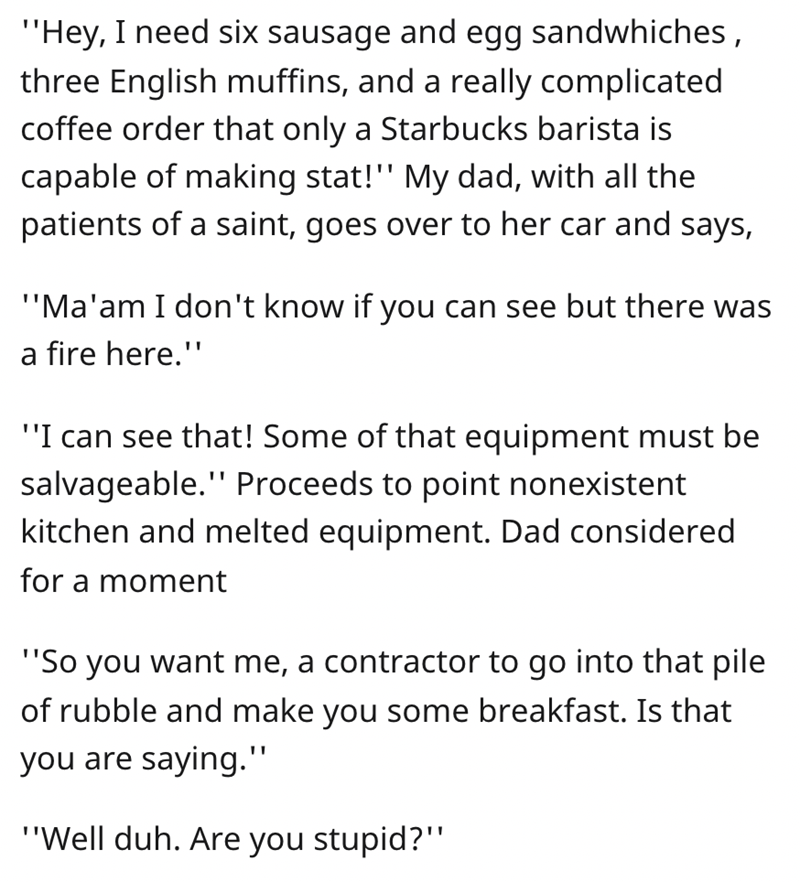 Advertisement
3. This is honestly such a savage reply from the guy side! 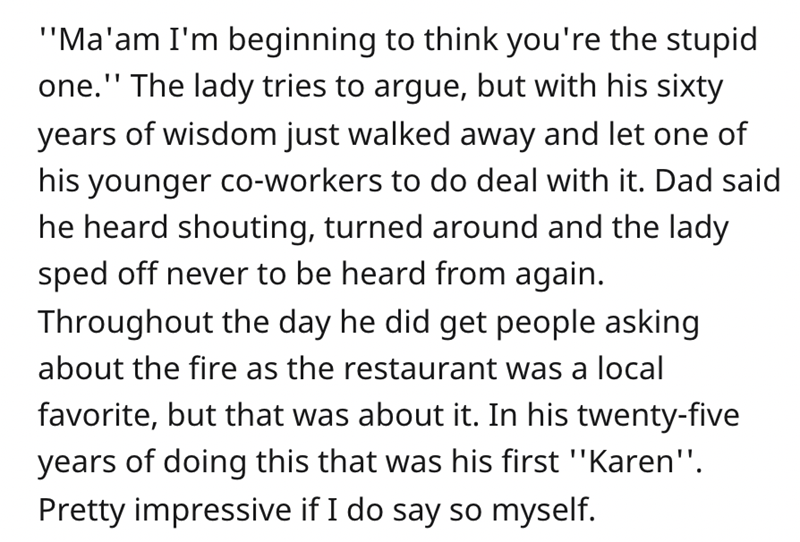 Let’s go ahead and take a look what people had to say about it!

4. Every Karen story sounds the same! 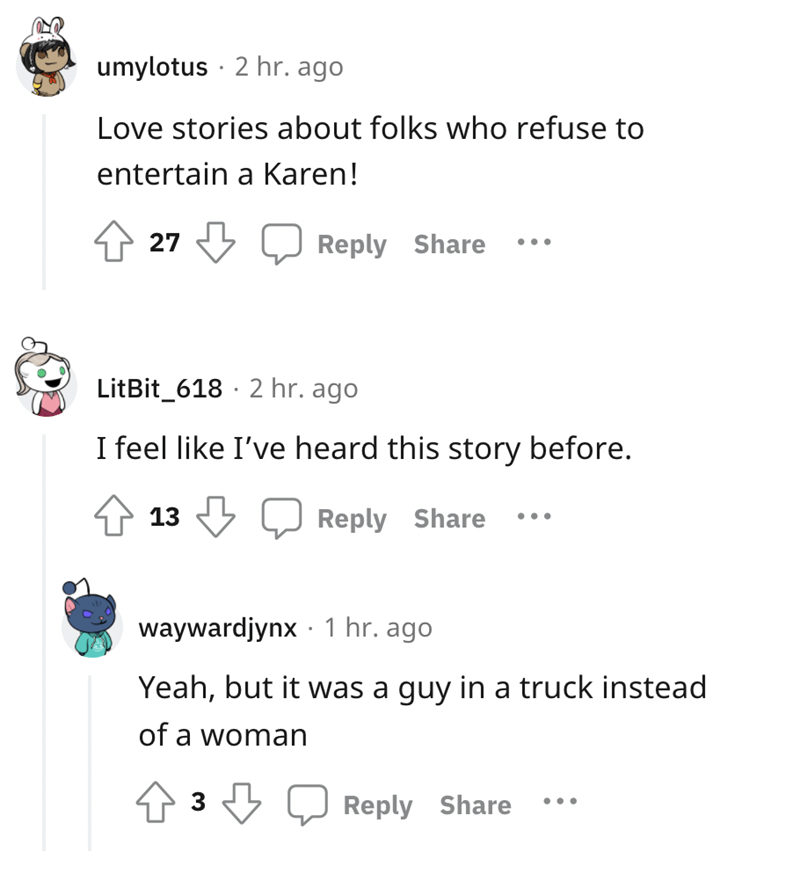 5. That barling through into the parking lot and rolling down the window on her minivan, just screams ‘Karen’! 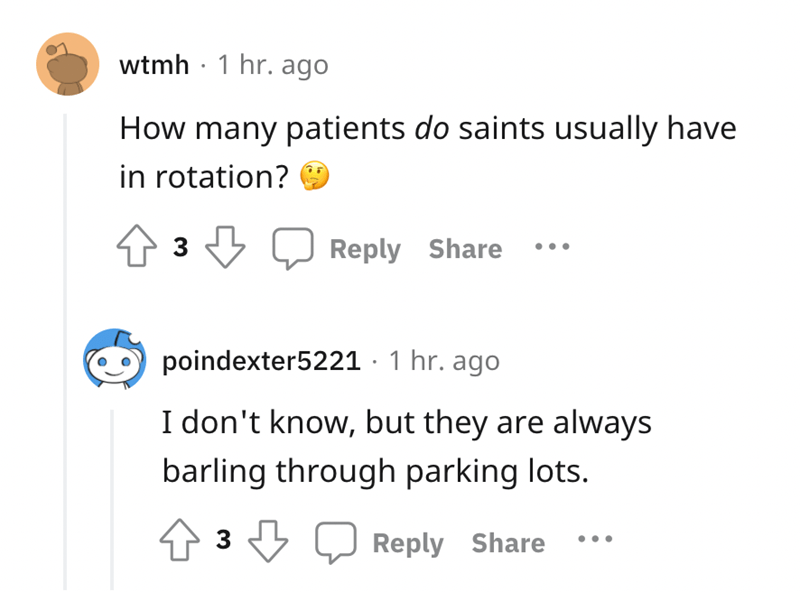 Advertisement
7. Maybe the younger co-workers, who were stuck with this Karen, did that!

8. The answer to that question is still an unsolved mystery!

Advertisement
11. This is sadly true!

Advertisement
12. How can some people be so insensitive about things?!

Aah, Karens. Customer service nightmares have plagued us all, and the fortunate few who work in retail have had to endure them. Those who feel the need to disparage customer service representatives are automatically labeled as Karens, regardless of their age, gender, or appearance. Even if the Karen memes have once again swept over the internet, we must remember that these are tragically real people who exist in our world. Poor customer service representatives are compelled to deal with people like these on a daily basis because their antics cause other customers to be held up. Do you have an interesting or should we say downright bizarre Karen story that you would like to share with us? If yes, then feel free to do so!