If your partner is jealous of your pet and tries to get rid of it, leave him/her.

Pet owners love their pets and can’t think of losing them. It would be a nightmare for them to lose their pet. Partners of pet owners often complain that their partners give more attention to their pets. A Reddit user posted to the subreddit r/relationship_advice and explained his situation. While he was out on a one-week trip to Europe. His girlfriend told him that somebody has released the dog. OP was depressed to hear this and told her to put up lost dog signs with a reward of 3000 dollars. When OP came back, he received a call from a vet telling him that they have found his dog. He got happy and went to the vet 50 miles away with his girlfriend to take his doggo. While they were coming back home, he got suspicious that his girlfriend has released the dog. She kept refusing and then she started crying and told him that she released the dog because OP was giving all the attention to his dog. Scroll down to read what OP did next after hearing his girlfriend’s confession.

1. OP’s GF released his dog while he was out on a business trip in Europe and told him that the dog ran away. OP then got a call after some days that they have found his dog.

My (m23) girlfriend (f22) of 4 years released my dog while I was on a one week business trip in Europe. On the 5th day of my business trip my girlfriend called me saying someone opened the yard gate and the dog ran away. I was devastated as I had the dog for 5 years since he was a puppy. I was so in shock and upset and I’ve had more than one person asked me if something was up because I couldn’t stop thinking about my dog and looking depressed. I asked my girlfriend to put up lost dog signs with his picture and a 3000 dollar reward. When I came back my dog was still gone and I was thinking he was dead the whole time. 2 days after I came back I get a call saying they found my dog and I was very excited and my girlfriend said she was happy too but I knew that something was up when the vet that called me was 50 miles away. I drove up with my girlfriend and the vet said some old lady and her son found my dog on a trail and brought it to the vet. 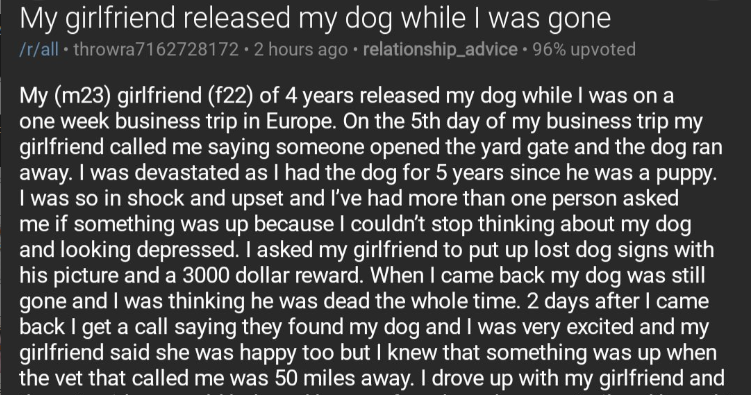 2. OP was suspicious that his gf has released the dog. Then his gf accepted that she released the dog because OP was not giving her too much attention. OP broke up with his gf and left the apartment.

On the ride back I was very suspicious of my girlfriend and accused her of releasing my dog and she kept saying she didn’t and some people probably stole it and released it. She eventually starts crying and admits to driving up and releasing my dog. I’m angry at her and tell her how what she did was cruel and I said I’m probably going to break up with her because she could have gotten my dog killed, especially because he is a Shiba inu and looks like a coyote. She then accuses me of giving the dog too much attention and not her but I tell her if that was such a problem she was free to leave without releasing my dog. I dropped her off and drove straight to a hotel that allows dogs with my dog and stopped responding to my girlfriend even though she keeps blowing up my phone and is trying to call me. I’m too much in shock to make any rational decision at this point because someone I loved for 4 years betrayed me terribly 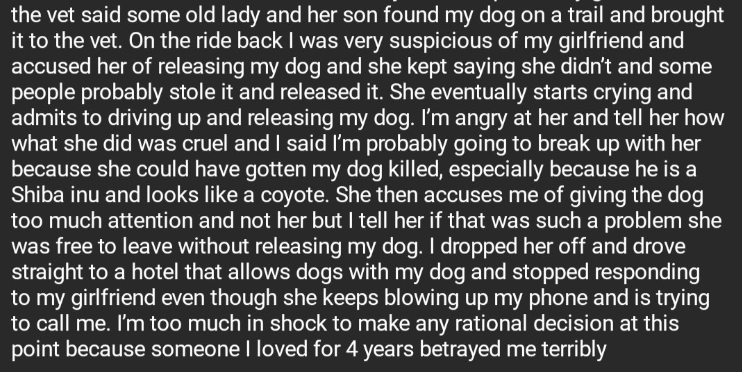 Who does such a horrible thing to get their partner’s attention? It seems like OP’s girlfriend is a narcissist who wants attention at every cost. She did not think of the poor doggo for once. He could have been killed. OP’s girlfriend needs therapy because she can harm anyone. OP has made a good decision and should stand firm on his decision. He loved her for 4 years and she ruined their relationship by doing such a horrible thing. Scroll down to read what people suggest to him.

3. OP should not give his gf second chances. She can go to any length. 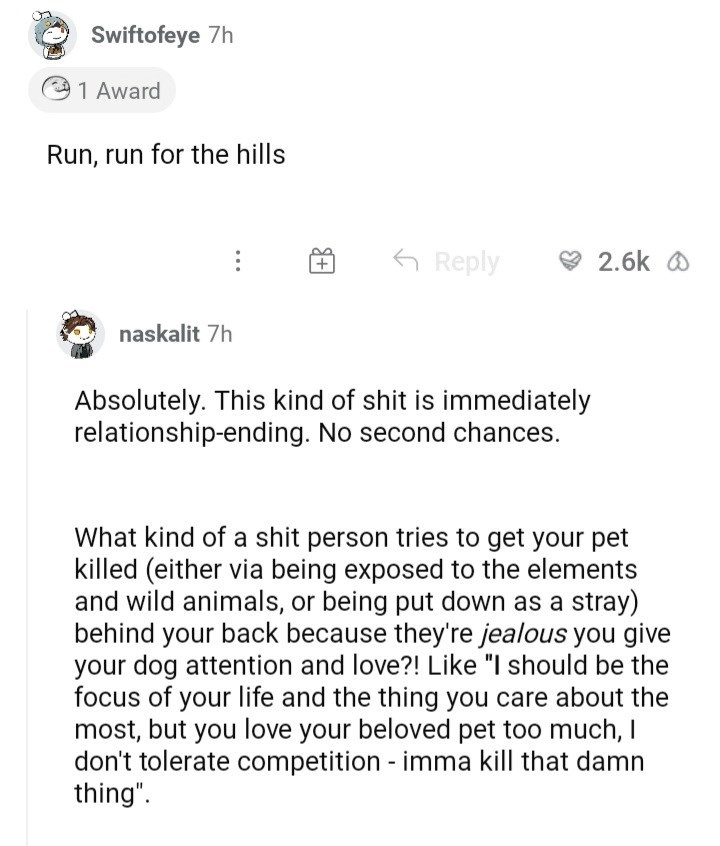 4. OP has made a rational decision of leaving his gf who tried to get the dog killed. 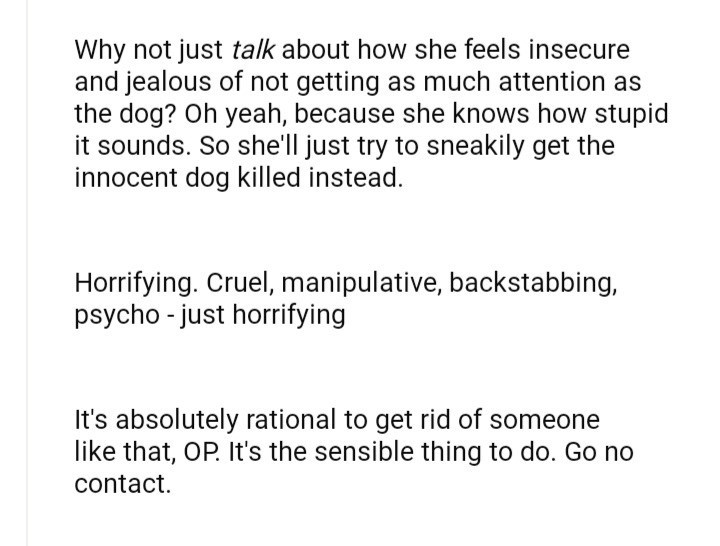 5. She released your dog, you release her. Revenge taken. 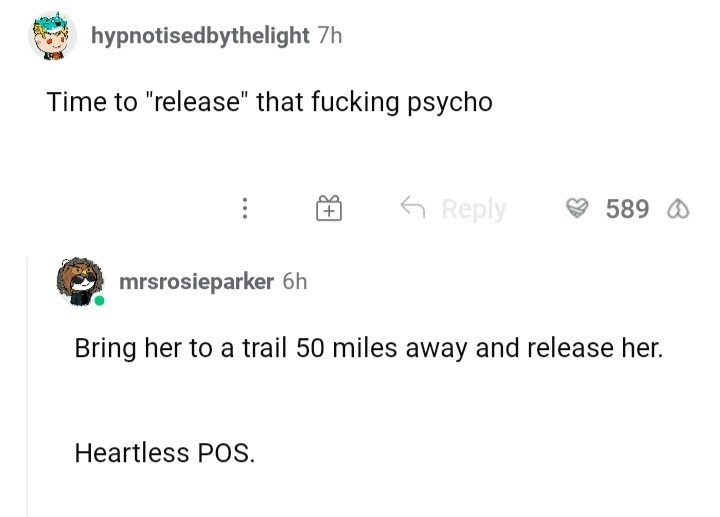 6. OP’s gf has a suspicious personality.

7. Get rid of the psycho girl. Get her out of the house because she may harm you. 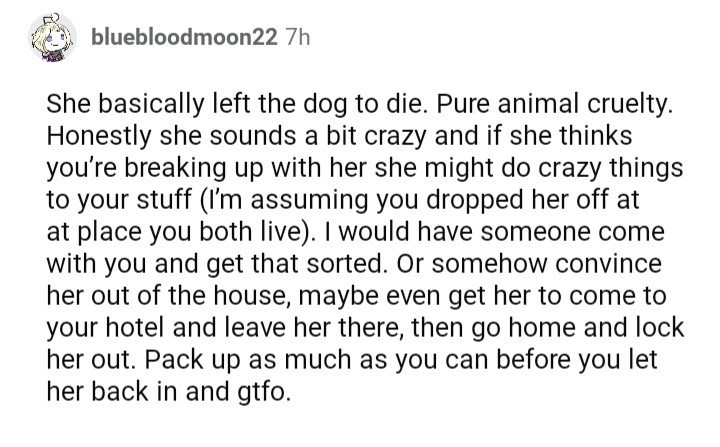 8. OP’s gf is a psychopath and needs therapy. 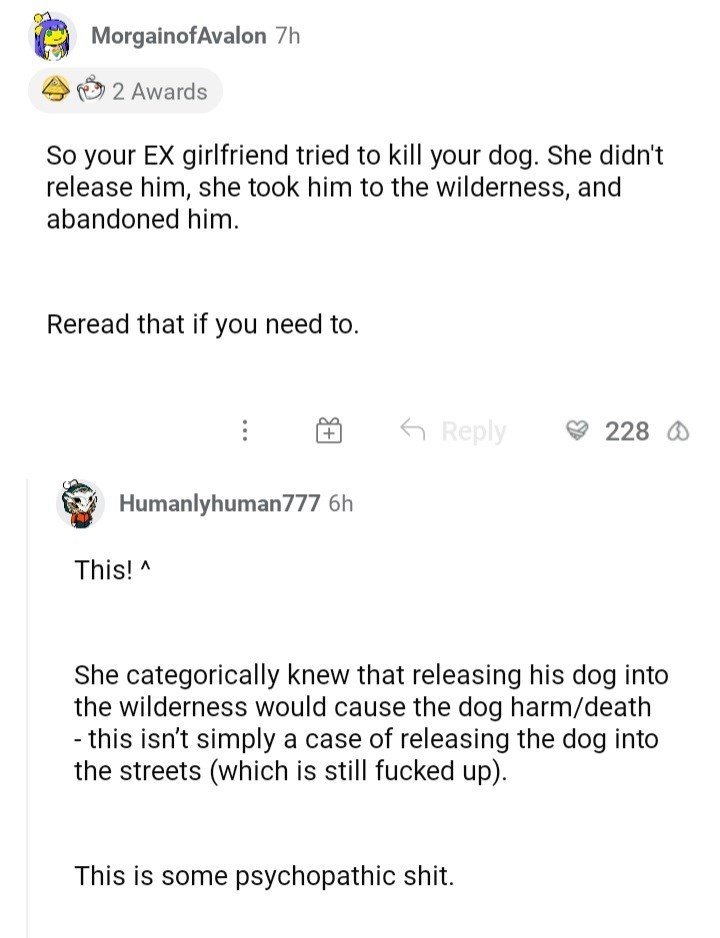 9. If she can get jealous of a dog, she can be jealous of anyone. His mother and even his kids. 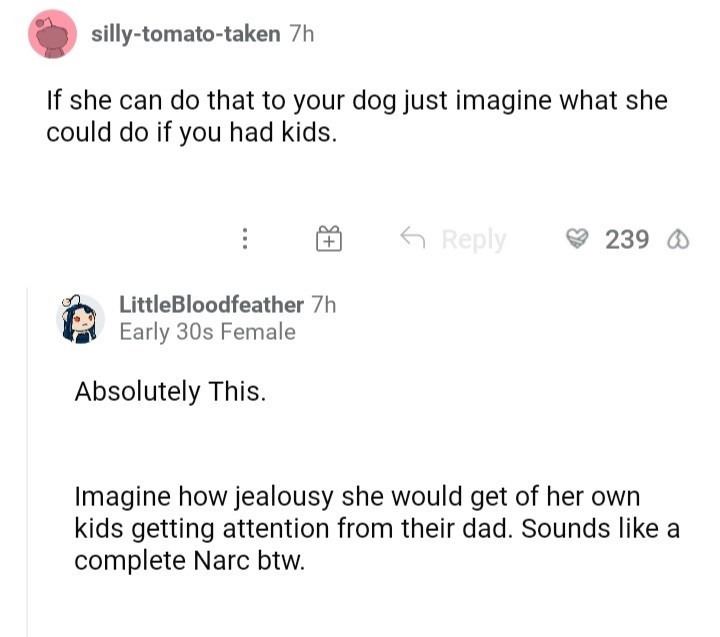 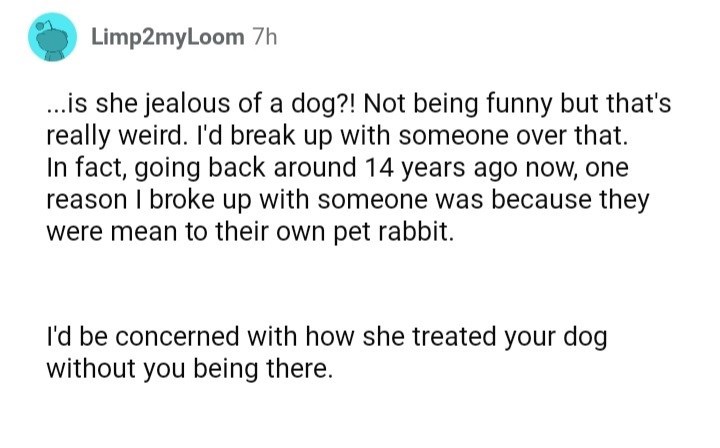 You be the judge here and tell us, what should OP do? Has he made a good decision of leaving his girlfriend? Comment down to share your opinion with us.