Cats choose us not the other way around.

Whenever we adopt a cat, we think that we are the ones giving them a home. But in reality, it is the opposite, most of the time the cats are the ones choosing us. And that is exactly what happened with this cat. You see he had decided that he was going to get a cat and he had his heart set on a siamese cat. However, by the time he went to get the cat, someone else had already chosen that kitty and that is where Merlin steps in.

The story of how the couple found this adorable kitty is truly heartwarming. Because of the blindness that merlin faces, Nathanial was afraid he wouldn’t be able to take proper care of this beauty because he is currently a student and quite busy but it ended up as a perfect situation for them.

It actually was my coworker that convinced me to go in–she had just adopted a cute kitten from there. Browsing through their cat adoption site, Nathanial and I had our hearts set on a Siamese kitten, but by the time I got off work, they were all either on hold or already adopted. The lady who had shown us around eventually noticed us indecisively meandering; she stopped to tell us that she had a favorite, but that he had some issues and was sick.

She took us to the medical wing to show us this tiny kitten who was recovering from a head cold. When I was first told that he was blind, I was a bit worried. As a full-time student also working two jobs, I was afraid that I wouldn’t be able to provide Merlin with the attention he needed. As soon as I got to hold him, I think it was pretty obvious that he was perfect. -Nathanial

Meet Merlin, a blind kitty who has taken the Internet by storm. 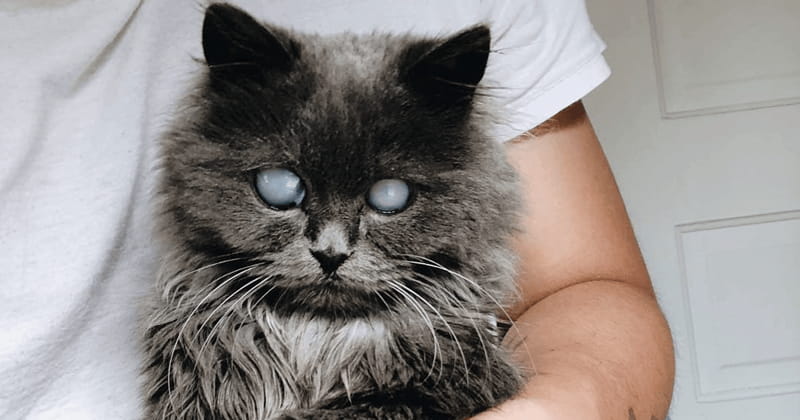 His parents go by the name Nathanial and Elliot and they couldn’t be happier. 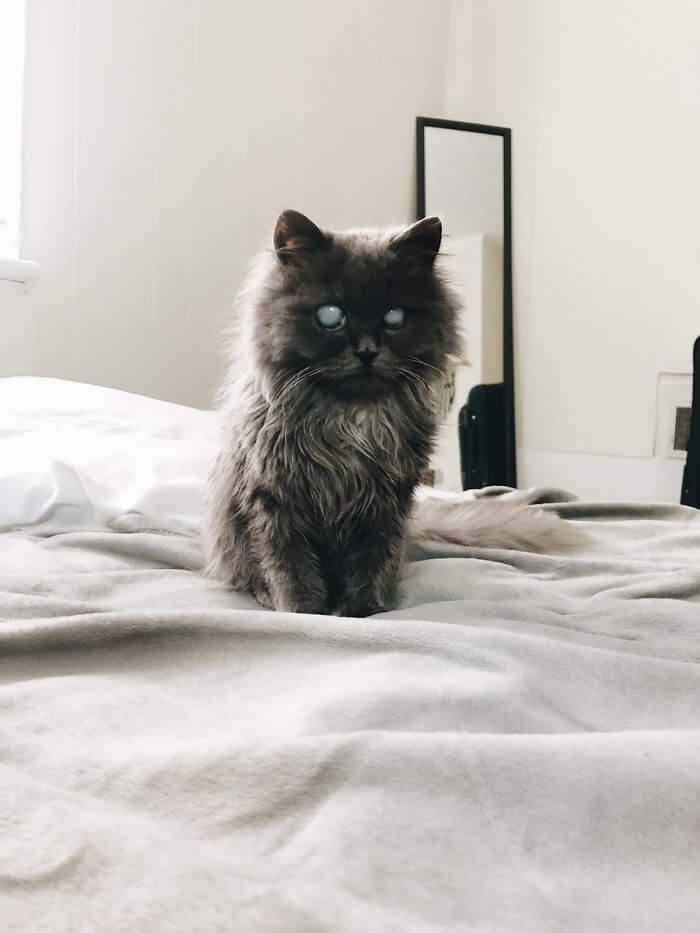 He’s an affectionate cat that loves being acknowledged and held. He’s never destructive or petty, either. Because he was born blind, he really has no concept of fear, and so he’ll attempt to jump off of pretty high places. He doesn’t hide or avoid people–he’ll run up to the door to meet us and climb all over guests sitting on the couch. His preferred place is on someone’s lap. -Nathanial

Apparently, his blindness doesn’t stop him from having fun. 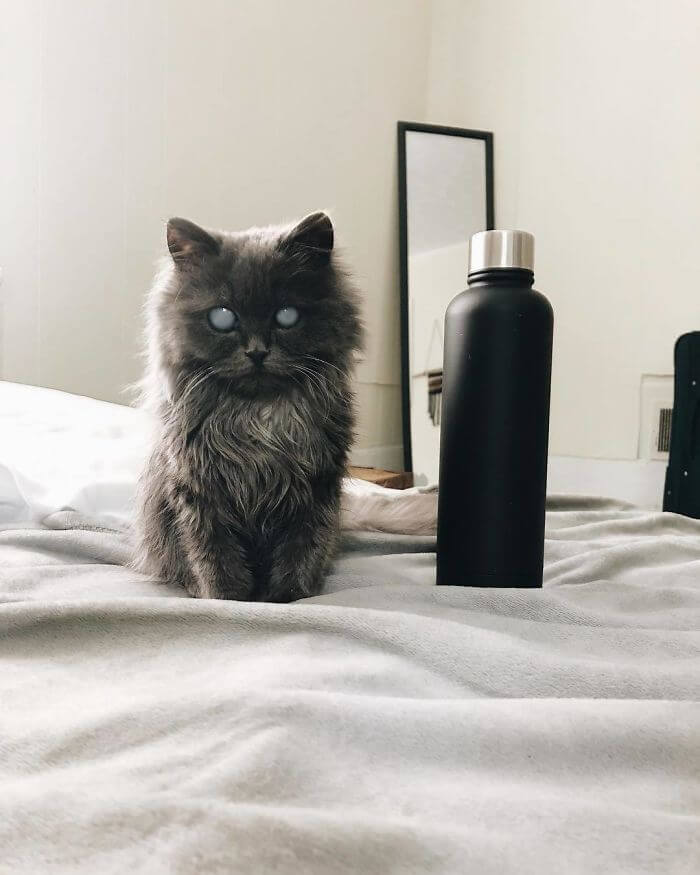 And he especially loves sitting on laps. 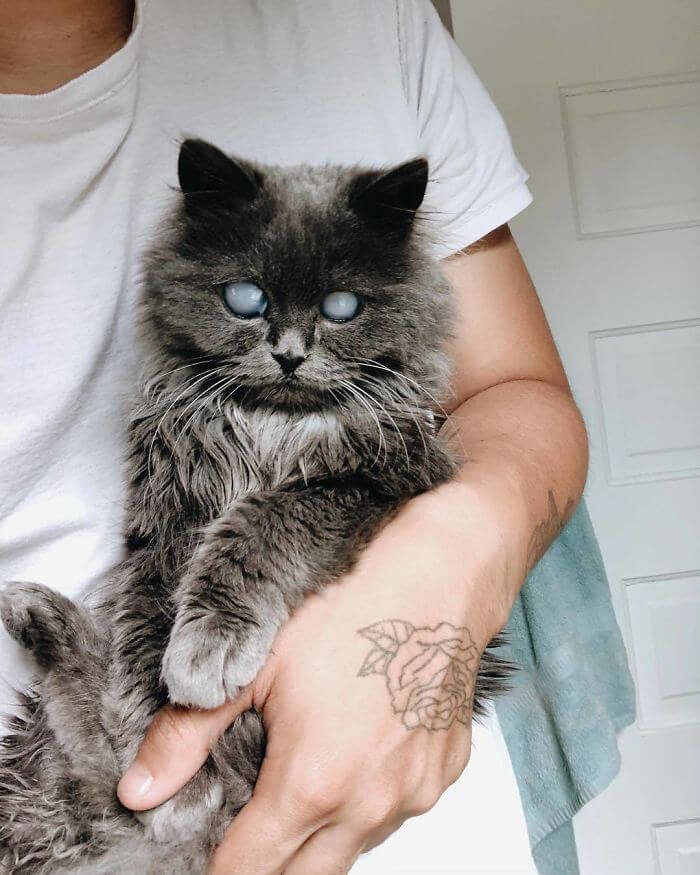 Anytime we sit on the couch or the bed, he jumps up and is ready to be cuddled. He loves having his face and ears scratched; we aren’t quite sure why, but he loves having the areas around his eyes massaged. If someone puts their hands up to his eyes or nose, he’ll usually awkwardly press into it as if he’s trying to push them away, but it’s his way of feeling loved. -Elliot

He is also a relatively new breed. 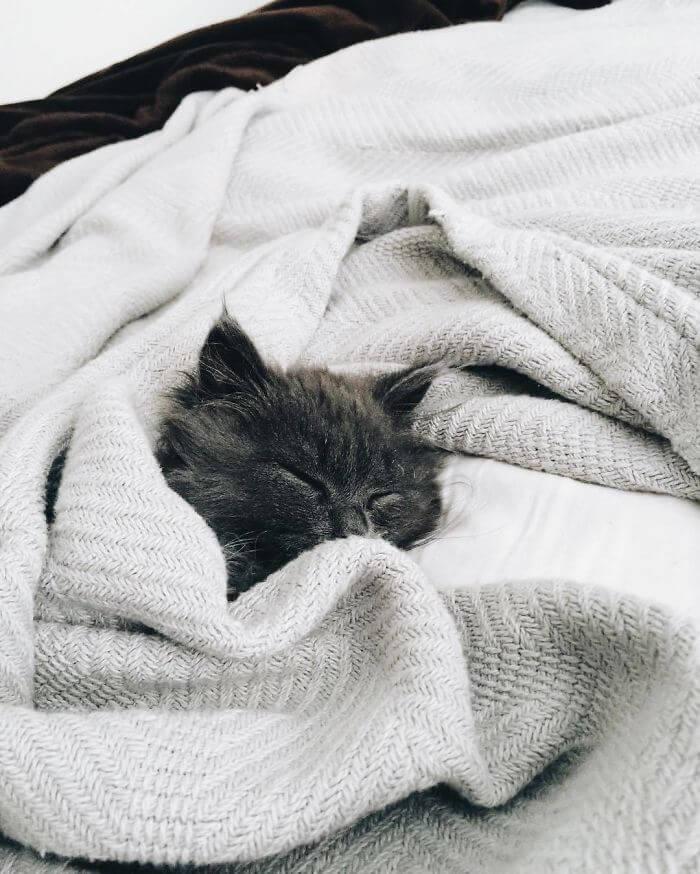 He is actually a mix between Persian and Munchkin. 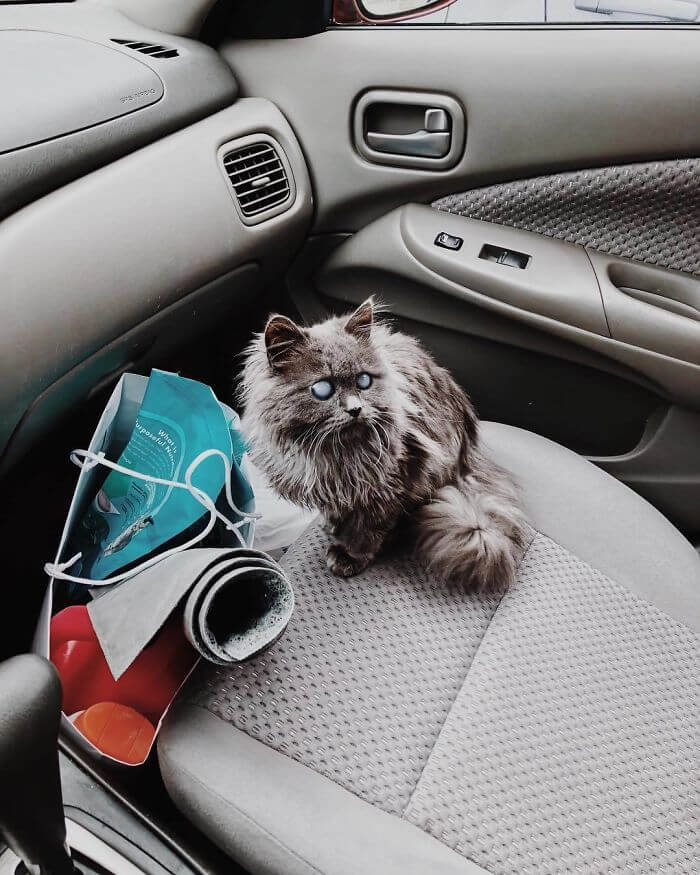 It’s a pretty new breed–by new I mean 20 to 22 years. Napoleons are pretty small, but they’re able to move around as easily as normal-sized cats. For the most part, they inherit the Persian’s physical characteristics.

He is clearly a joyful cat. 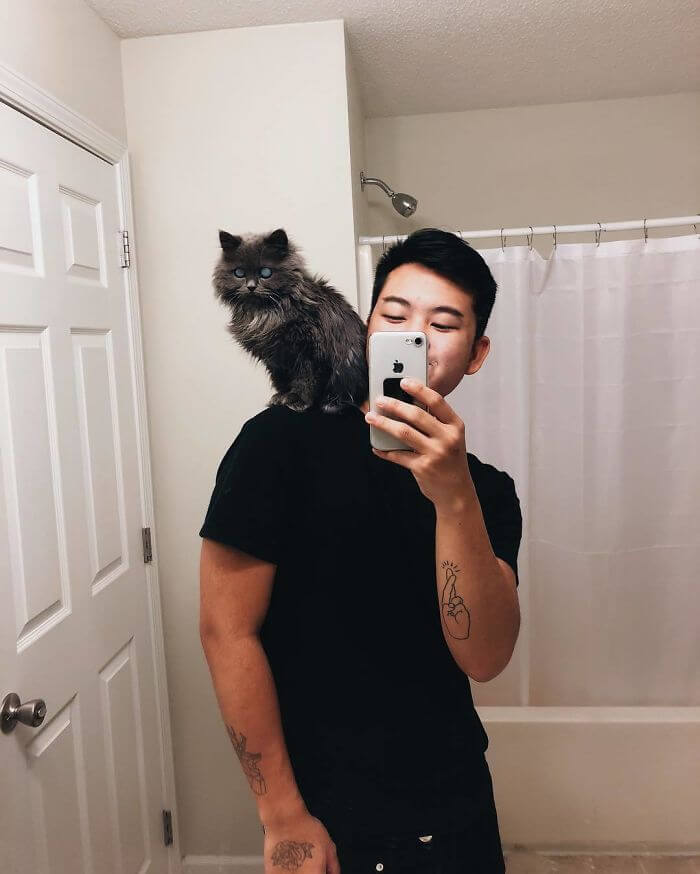 And he seems obsessed with watermelons. 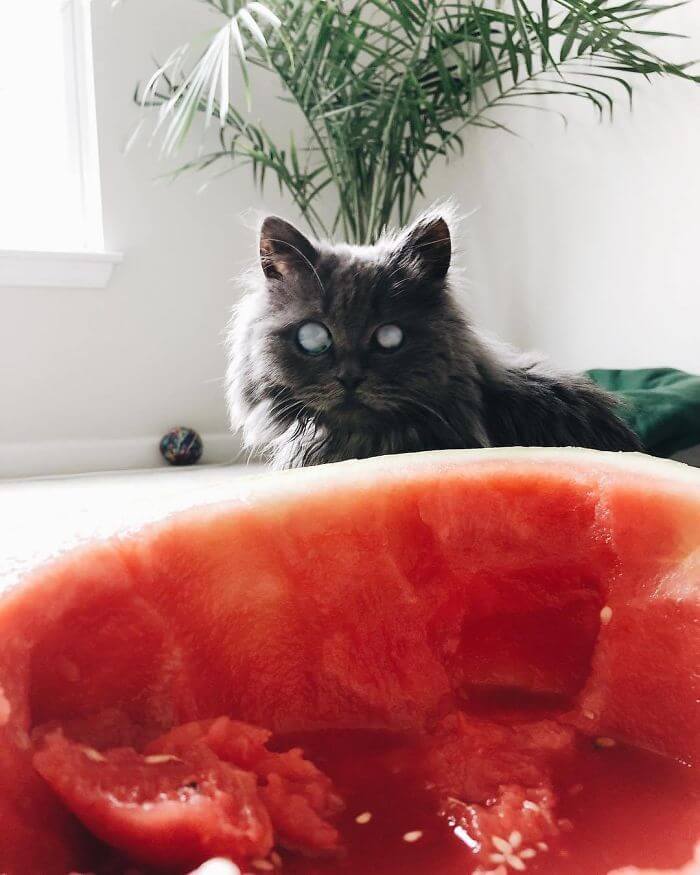 So it is no surprise that the Internet loves him. 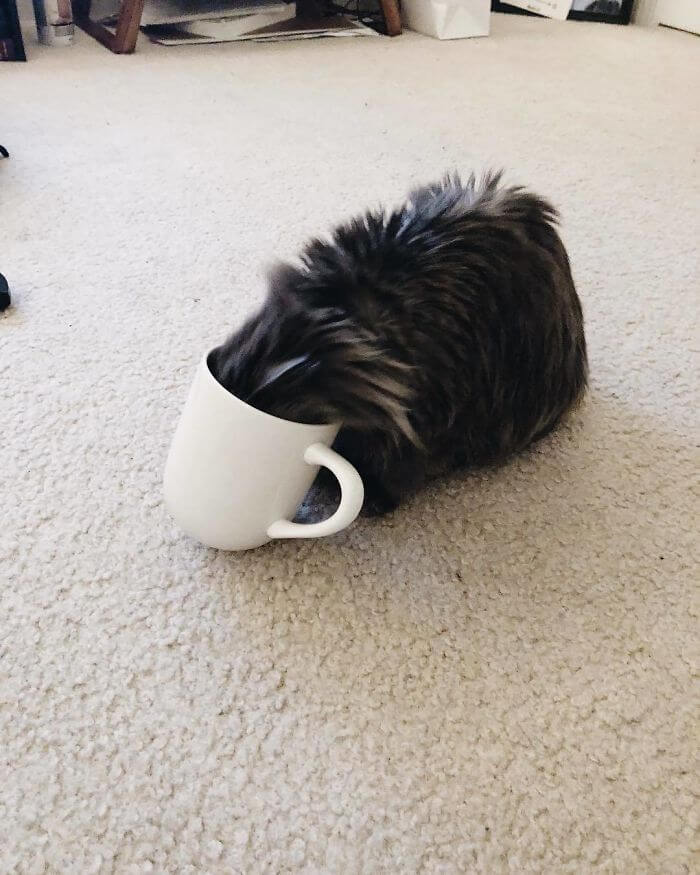 Honestly, we forget that he has blind eyes. When we first moved to our apartment, he definitely had trouble navigating, but he learns quickly and really knows how to own the space. His greatest recurring struggle is from our coffee table’s glass edges: Every now and then, he’ll jump or walk into it, but we think he’s learned. All he really cares about is where the food is and how far away it is from his dads. 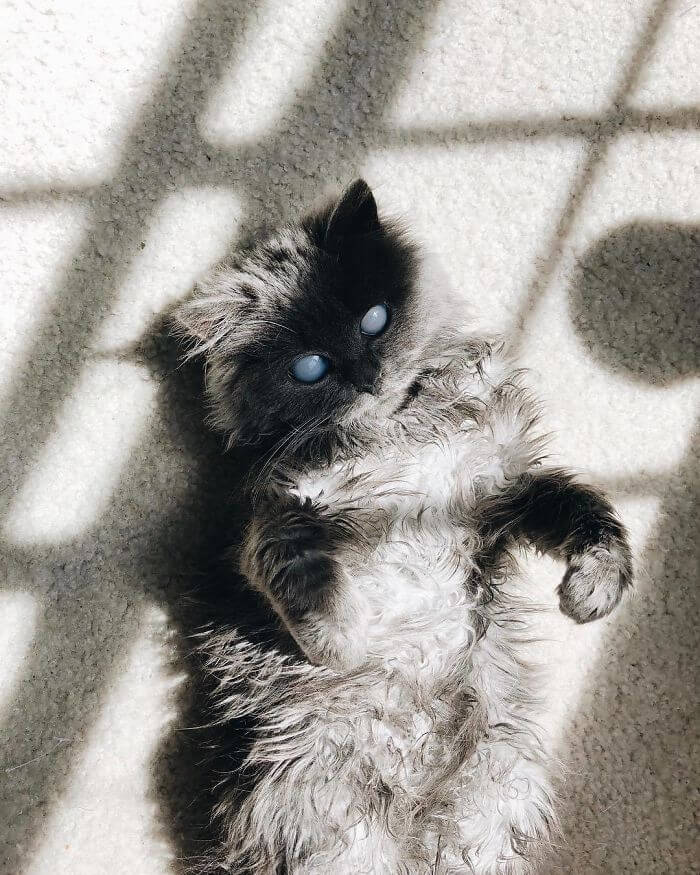 He was sick for a while after they adopted him but thankfully they figured out the food was the culprit. 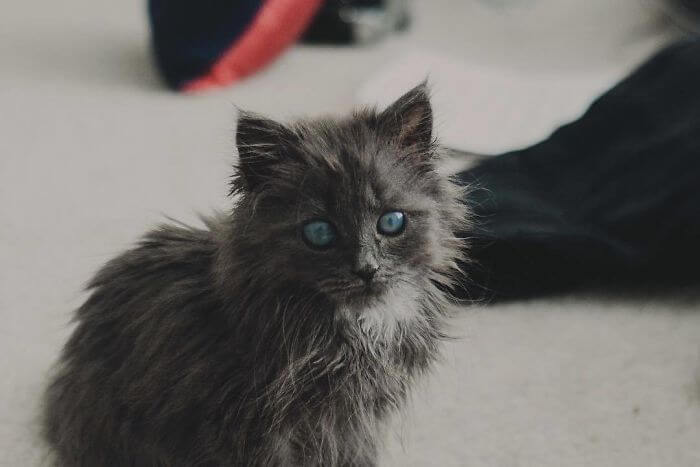 For a while, he was having seizures, and we really couldn’t figure out why. Through some research and trying out alternatives, we learned that his food was causing it. We removed wheat from his diet, and he’s been perfectly content since then. -Elliot 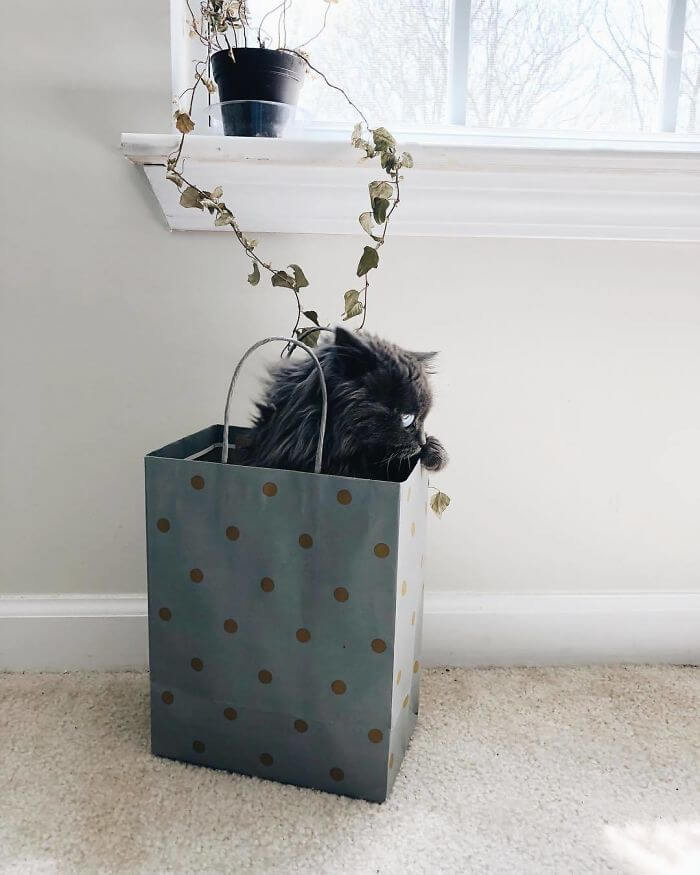 Although he can be a scaredy-cat when it comes to socializing. 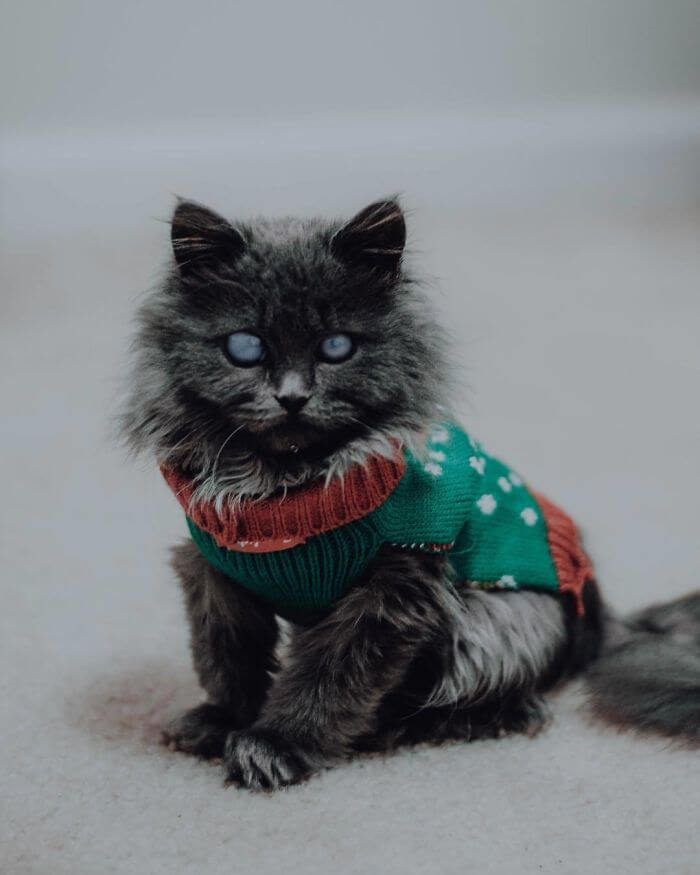 We’ve also learned–the hard way–that he’s easily dominated by other animals. Cats, in particular, tend to bully him. He never fights back, but we have seen him hiss a time or two. We have to keep a close eye on him around other animals. Other than that, he really is perfect! 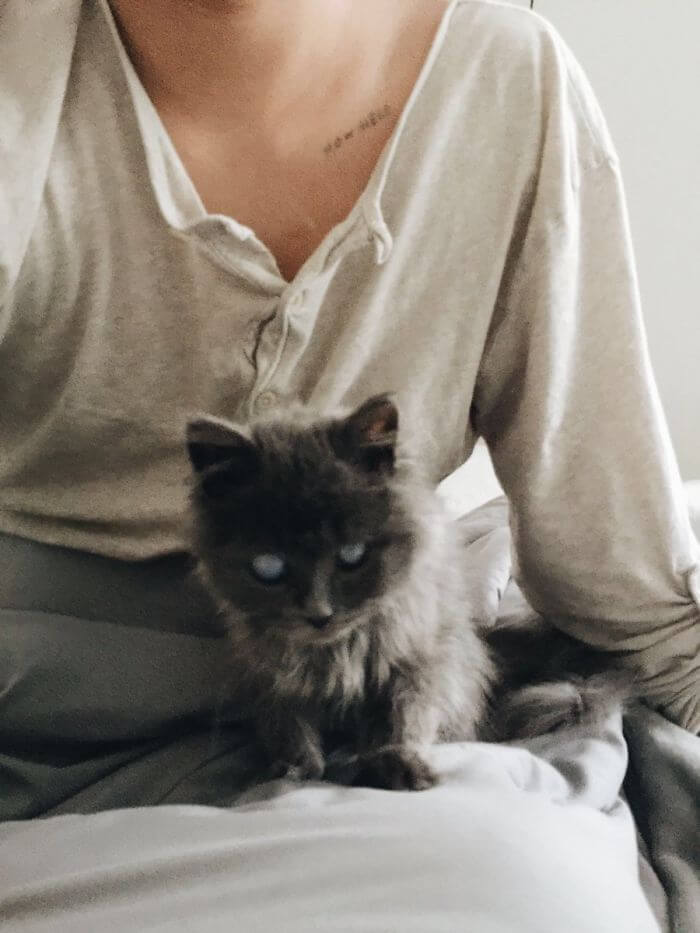 We just started accumulating a lot of pictures on our phones and decided to share them with the world. It wasn’t an account we were regularly posting on, but when we did we made sure that it looked good. Honestly, Elliot was proud of the way his apartment looked at the time and thought Merlin was a good subject to help show it off.

What do you think of Merlin? Would you ever adopt a blind cat? Comment down below and let us know.