An open relationship isn’t for everyone.

I know many people may not even agree with the concept of an open relationship but we have no right to judge anyone on what they want to do with their lives. And in many cases, it works out well for the part and other times it does not. What I can say is that making it work so your partners don’t feel jealous or neglected is a hard thing to do.

After all, the reason you open a relationship up to include other people is so that your own relationship doesn’t become boring. Whatever reason you might have to do that, you still have to compromise on certain things and pay enough attention towards your significant other. This woman however was clearly looking for a way out and even smooched off her boyfriend along the way.

Is it just the media that has made me added or do high school relationships don’t really work out that often? 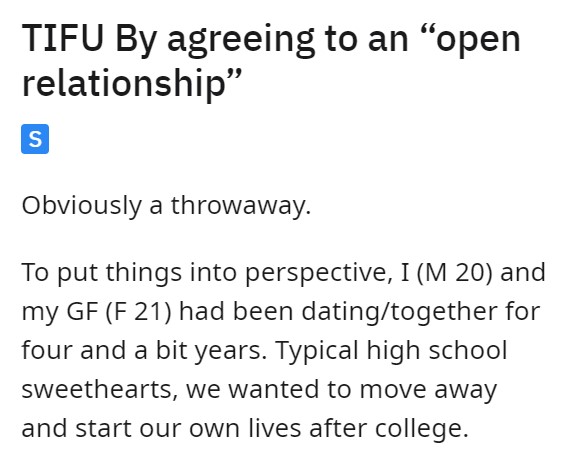 As long as they both consented to the idea, it seems like a good way to ‘spice things up’.

I am fine with the fact that she told him but asking for hotel money is a low blow. 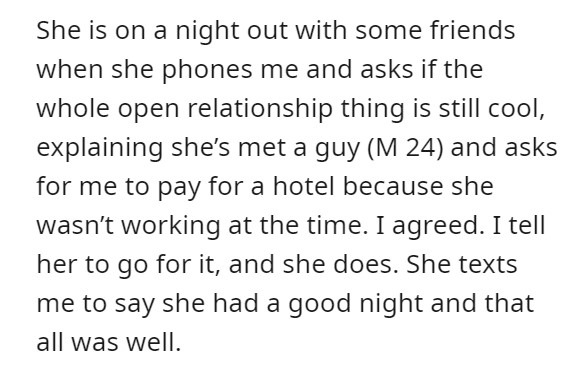 And that is when alarm bells started to go off in his head but he paid for the hotel stay once more. 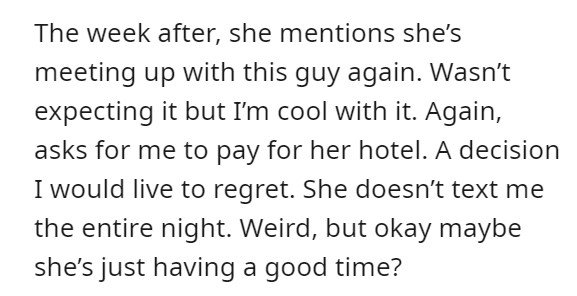 So she broke up with him over texts. Why am I not surprised? 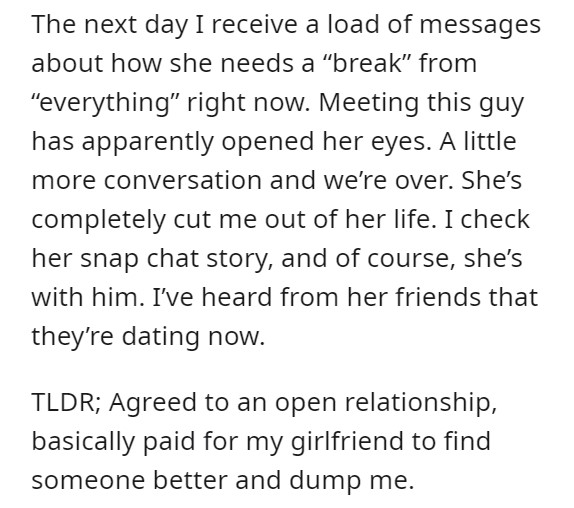 At least he dodged a bullet with that one before it went any further. 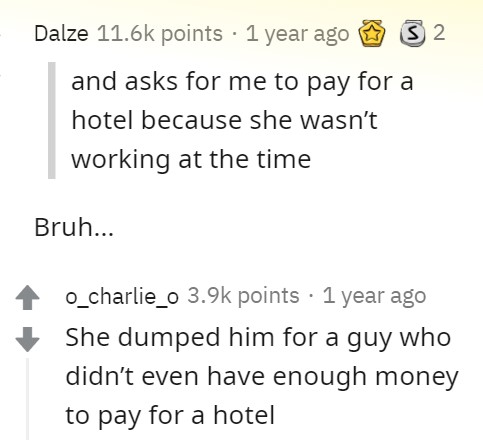 Dude. Why would you pay for the room? Even if it’s open it’s not your responsibility to pay for her screw pad.

Criticism aside sounds like you are better off. She was looking for an out and she found it. Be prepared for her to come crawling back though when it fails with her new toy. –Cannon1

It is clear that she was looking for a way out and just used it as an excuse. 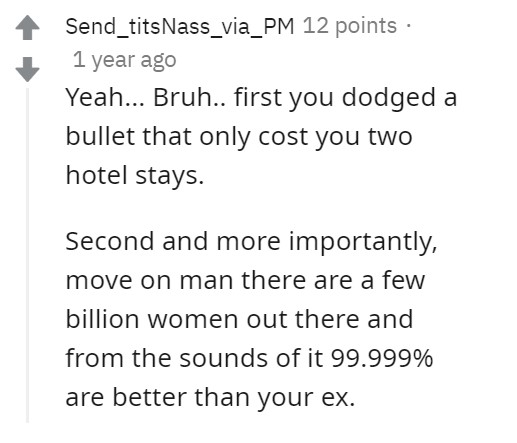 He should have known when she asked for money. I mean that is just weird. 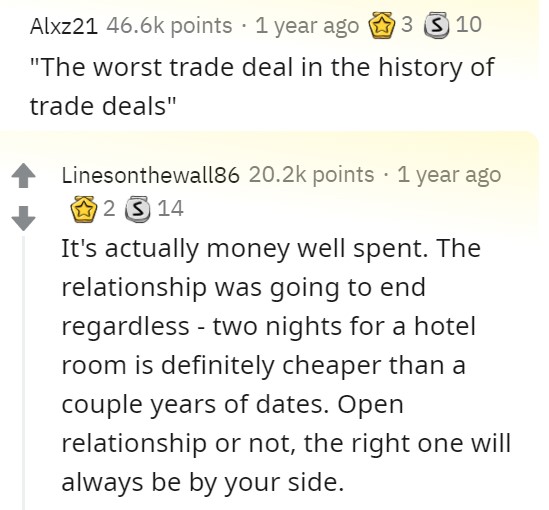 Maybe I don’t know enough about open relationships but this doesn’t sound right to me. 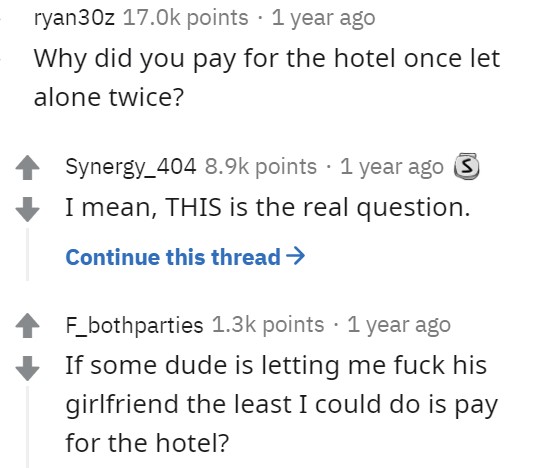 I suppose paying for two hotel visits is better than paying for divorce later on. 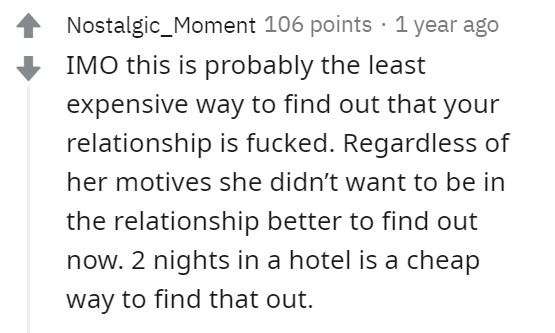 He was just trying to be nice and not overbearing or clingy by the looks of it.

This is definitely going to happen in the near future. Hopefully, he has learned his lesson. 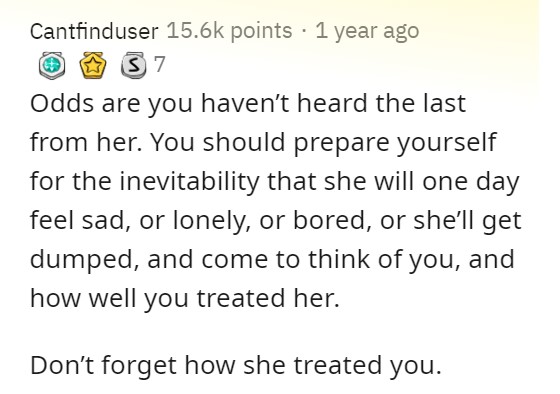 Dude this is 100000% the correct response. OP – it sucks now but in a matter of a few weeks you’ll be doing great. Out with the boys trying to find some coeds. Right around this point she’ll get jealous, she’ll get dumped, her family will make her feel bad, etc. DO NOT FUCKING FALL FOR THAT SH*T. Don’t answer texts, calls, letters, or smoke signals.

Inevitably this will happen. It’s the oldest story in the fucking book. When she comes back you have 2 options: 1: You take her back, it’s good for 6 months, then she finds someone else and breaks your heart again. 2: You cut this awful person off, ignore her when she tries to talk to you and you find someone better. I ASSURE YOU that this option will hurt her more than she ever hurt you.

Don’t f**k it up when it happens. –OneTimeForMe1

What are your thoughts on open relationships? Would you ever go for it? Comment down below and let us know. Don’t forget to share so your friends can relay their opinions as well.