Dress codes can be a bit too much sometimes.

Whether you are a school student, a retail staff worker, or just an office employee, you will find some crazy rules in your dress code that will piss you off. A lot of people have been going against dress codes as they think that your clothes do not affect your productivity. What do your clothes have to do with your job or studies? I do not see a flaw in the logic of either but sadly, “rules are rules” and we will have to follow them if we want to stay in these schools or offices. You probably see a lot of posts on social media about young girls wearing pretty much appropriate clothes but getting sent home from school because their skirt was half an inch above their knee. Sounds ridiculous, doesn’t it? But it happens and we hate it.
This Reddit user is a rebel who shared his story of working at a place that had a strict dress code. He forgot to wear his tie just one time and got a lot of crap for it. So later, he maliciously complied with the rules. Scroll down to read the whole story:

The guy got hired at a job but soon enough learned that it was a terrible place to work at. Employees would leave very frequently so the turnover was pretty high. 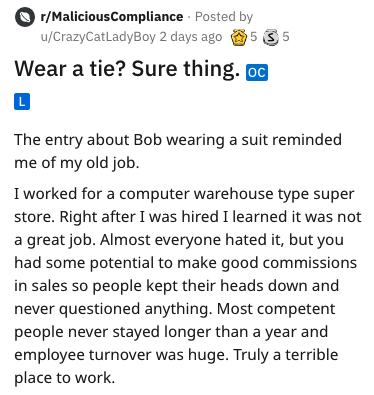 The guy had recently sold his own store and had a lot of free time on his hands. That is why he took this job so he could kill time and was not very serious about it. 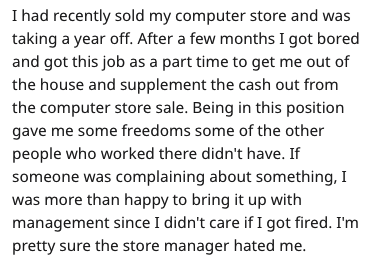 The dress code in that place was a white button-down shirt, tie, and Docker type pants. Not everyone could afford it but they would make-do. 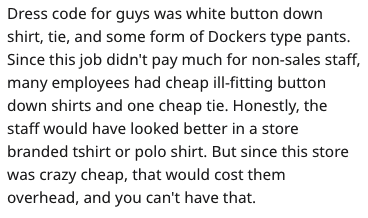 The guy told that he had a habit of collecting ties. He had all sorts of ties. However, one day he forgot to wear his tie while he was halfway through the drive to work. He didn’t think it would be a big deal. 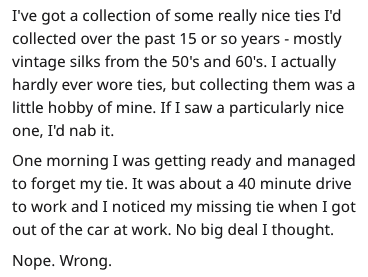 His direct manager was okay with it but he had to be sent to HR for this issue. 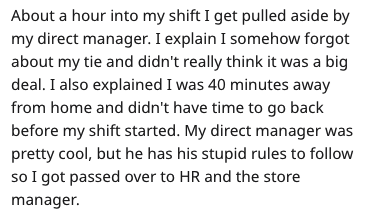 But boy, it was a pretty big deal for the store manager. He acted as if the guy just committed a crime. 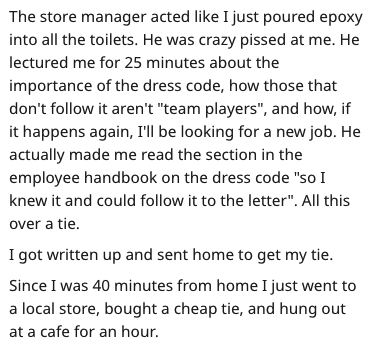 So to comply with the rules, the guy went thrift shopping. He bought the weirdest, most ugliest ties known to mankind just so he could wear them at work. The kind of ties that would pierce through your eyes if you wore them. 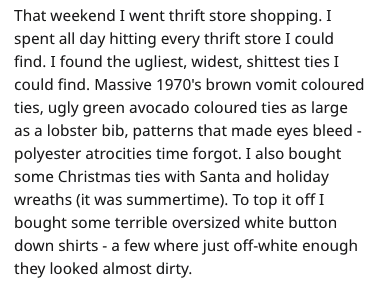 He started wearing the ugly ties to work every day but no one could say anything because he was still complying with the rules even though it pissed off the manager. 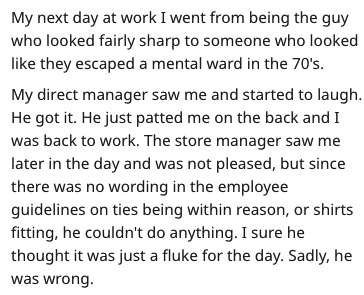 When he finally left the job, he distributed the ties to his coworkers to keep the legacy running.

Do you think he responded to the manager well? What would you have done? Share your thoughts with us in the comments section below.