We’re all a little curious about the world that we can’t see. We’ve grown up hearing ghost stories, experiencing paranormal activity, or watching horror movies. Even some of our cartoons involved ghostly figures and creatures that don’t really fit into a “human” category. So naturally, we were bound to develop a curiosity for the unknown. And a solution to that curiosity is communication and exploration. Which is something we love doing! This is especially true for those who love horror stories and want to know anything and everything! For some, this curiosity took a whole new turn. And thus, the Ouija Board was made.

The inventors of the Ouija Board, Helen Peters and her brother-in-law Elijah Bond, first coined the term. This happened in 1890 in Baltimore when both of them were using a talking board with a planchette on it and asked what it should be called. To which, the planchette spelled out Ouija, meaning good luck according to the board. And so, the Ouija Board was then officially made. It is a medium of exchange between our world and the world of the unknown. Through this, you can communicate with the spirits. Ouija Board consists of a board with letters on it and a planchette, which is a triangular device that people put their fingers on. You ask a question and it is basically supposed to move on its own. Yep, scary!

One guy, Marcus Hitchcock, decided to use the Ouija board to communicate with the spirits. What happened next was something that he would never forget! He went on to Twitter years later to tell his story and that’s exactly what we’re about to tell you. Scroll down and check it out;

1. Good thing he warned us at the start of the story!

2. Well, does sound a bit like his aunt is doing some fishy business in the house. 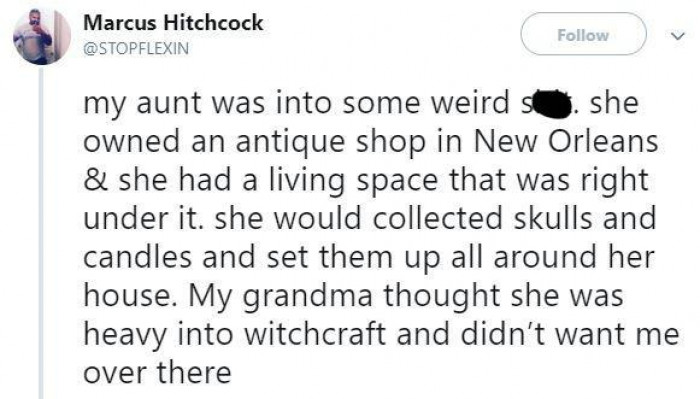 Wonder what the skulls are for.

4. Okay, never mind. This took a turn for the worse. 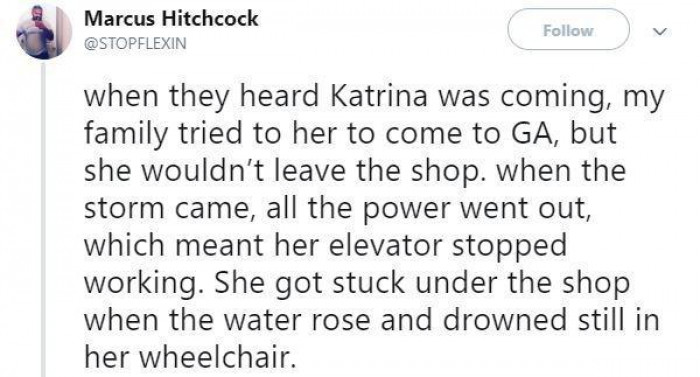 We wish she had listened to others’ advice.

5. We’re glad the uncle was there to rescue her items at least.

7. Here’s why one shouldn’t tell kids not to do something, 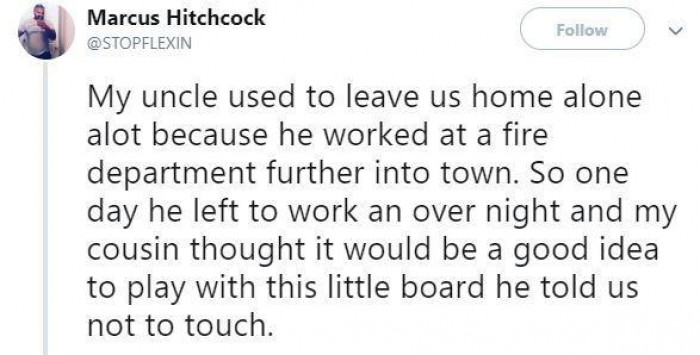 it only makes them more curious.

8. At least they had some fun initially. 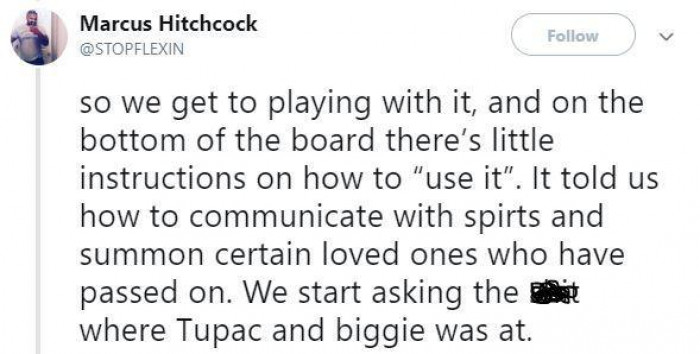 9. Little did they knew! 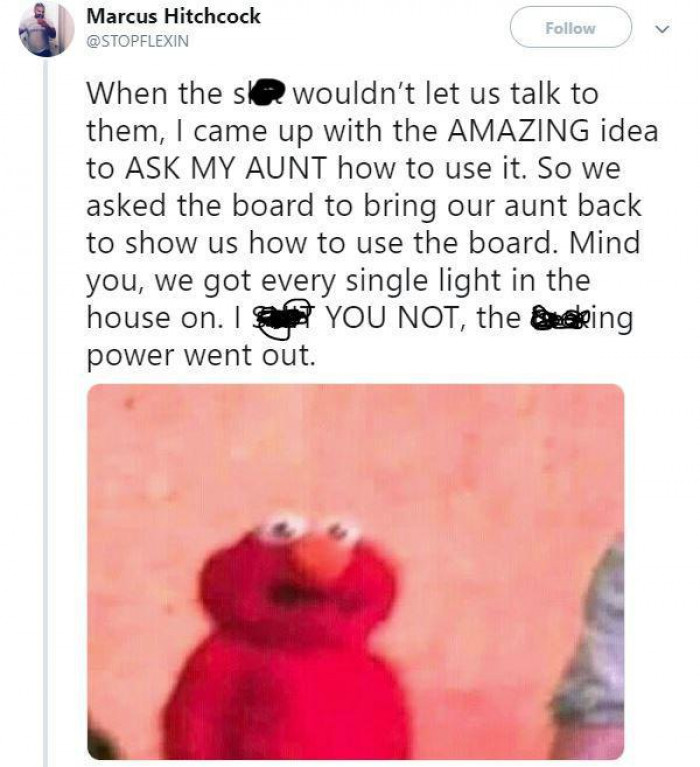 Yep, that would be our reaction as well.

10. Wonder why the spirit turned off the power. 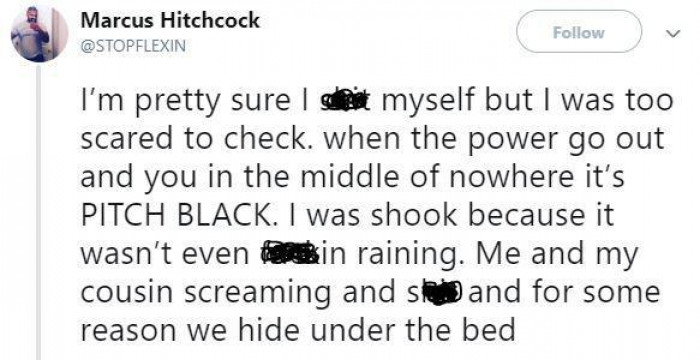 What do you have against the light? 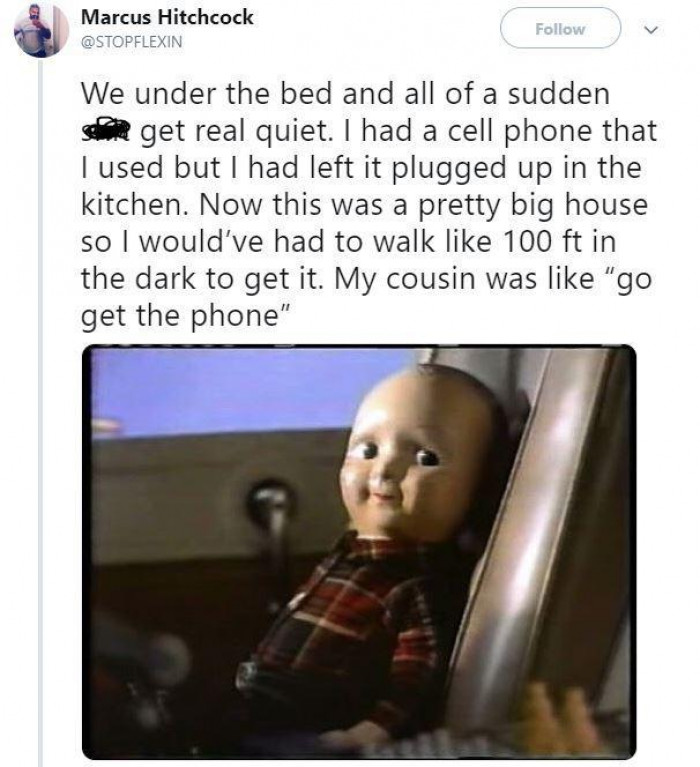 Mind you, they were home alone!

13. This cousin is somebody I wouldn’t want to get stuck with under similar circumstances. 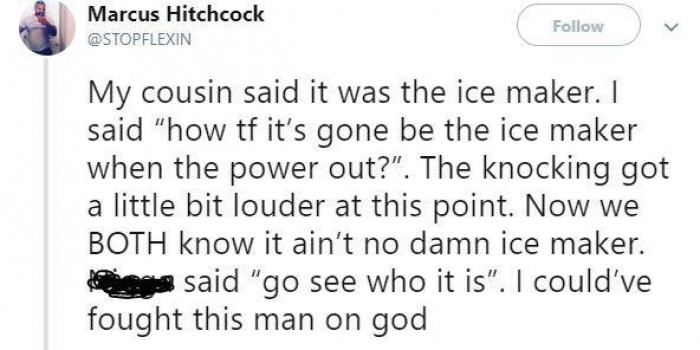 But I hope there aren’t any similar circumstances.

15. What is a swimming pool noodle gonna do in this situation? 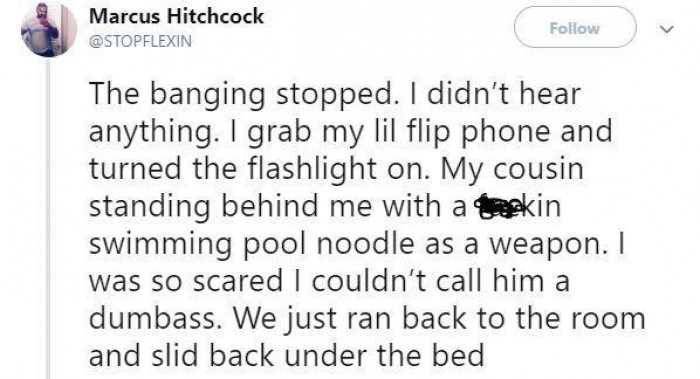 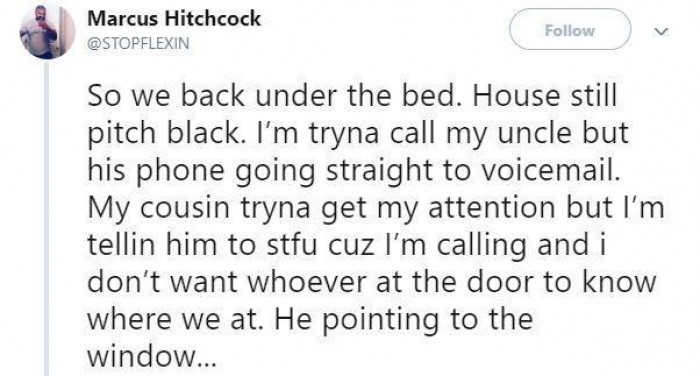 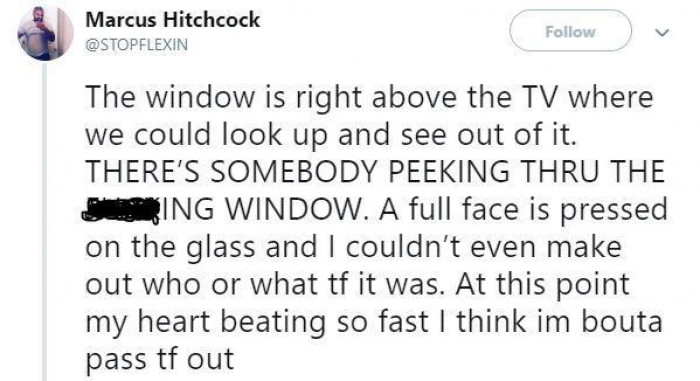 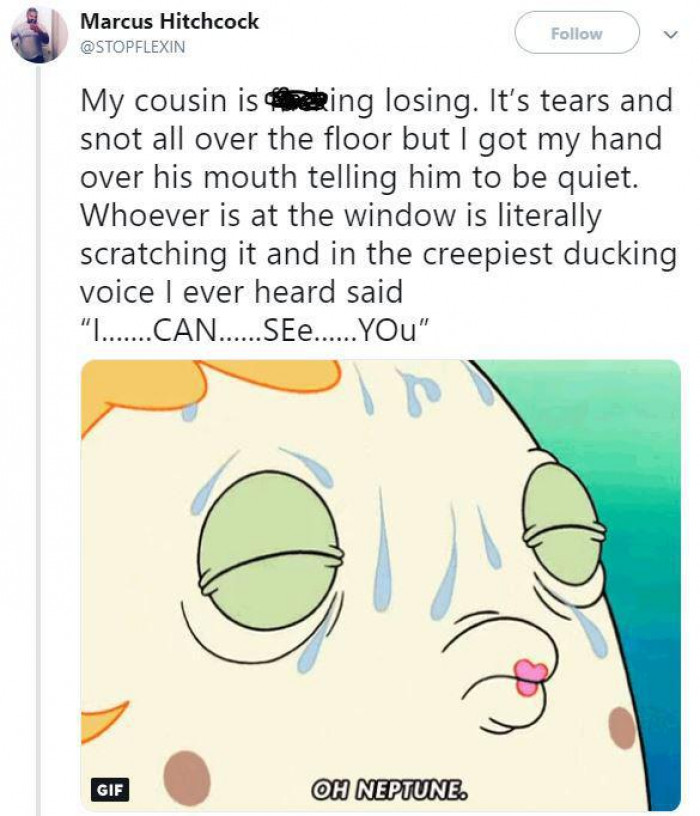 19. It was so loud that everything fell down! 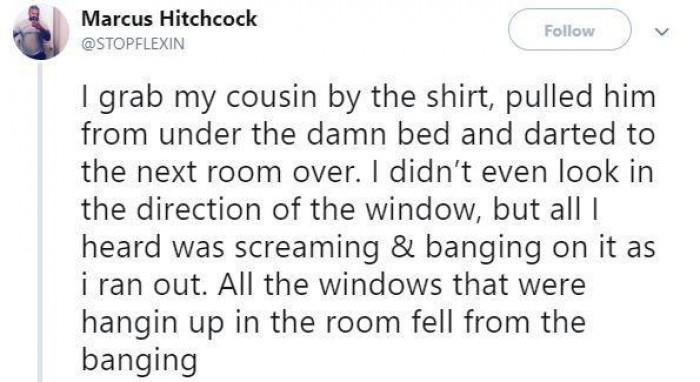 Why is the spirit so angry though?

We all want to try it, just to see if this really works or not. But, is it really worth it? What if something worse happens and we can’t control it anymore? I mean we would be opening up a portal for their world and ours. Don’t want them evil spirits to invade our spaces and they wouldn’t want you doing the same.

Marcus’s story does not end here! Keep scrolling, it gets worse.

20. This guy is just going through a lot and he even has to manage his cousin and now,

He’s gonna use a rifle on the spirit. 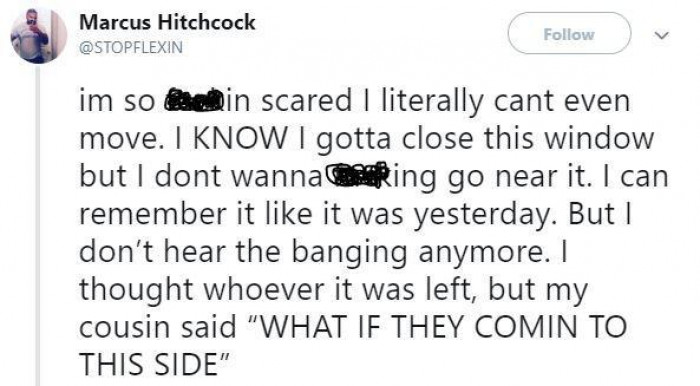 People do actually run towards danger.

23. Straight out of a horror film.

24. If this isn’t reason enough to just run away,

We don’t know what is! 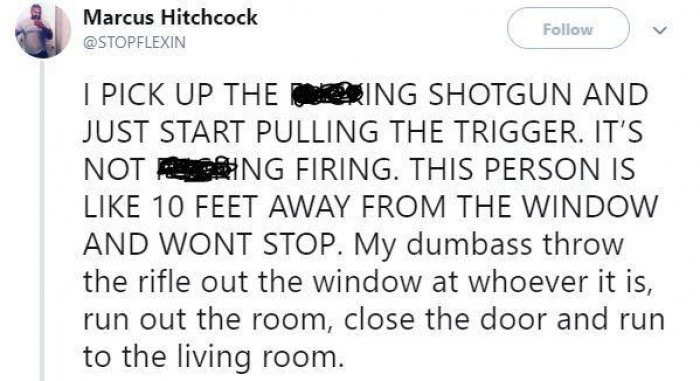 But yeah, just throw it.

26. This is unconditional love I guess. 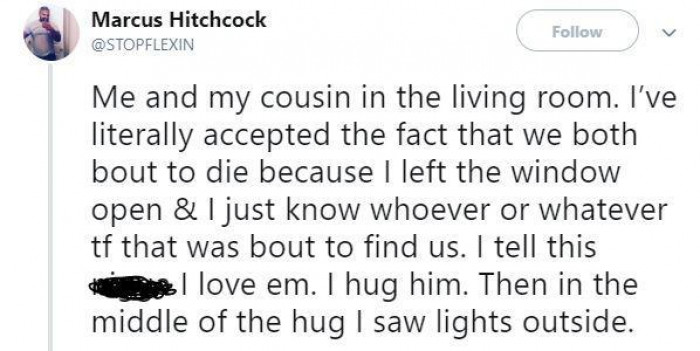 Light at the end of the tunnel? 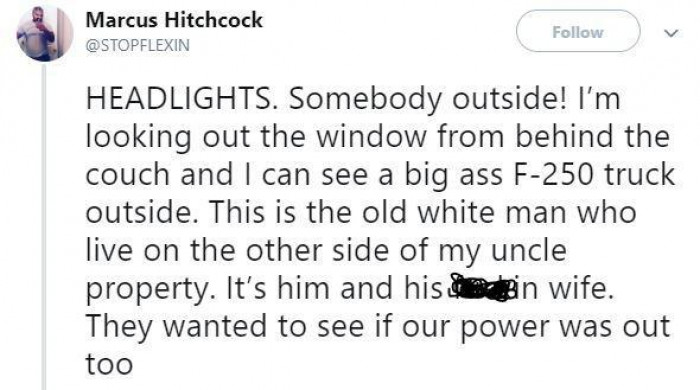 So now this ghost is haunting both the places?! 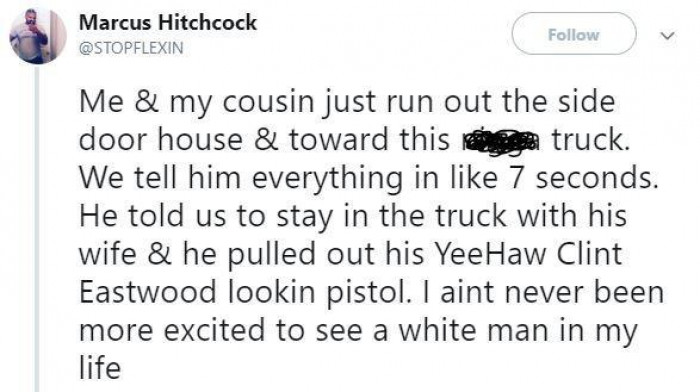 Just going to google what Clint Eastwood lookin pistol would look like.

32. Good to know someone is there to look after these silly kids. 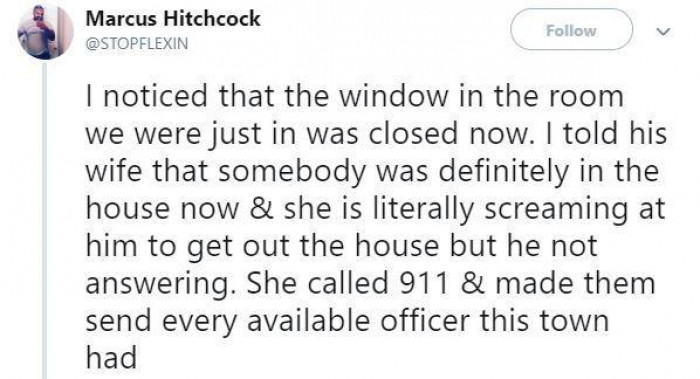 NO THE GHOST LEFT IT OPEN! 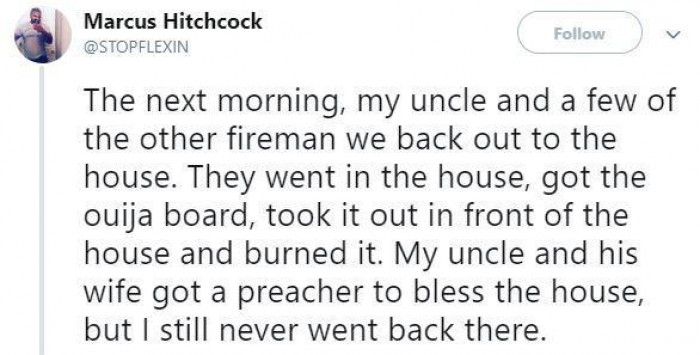 The water was there because she drowned!

37. Well, it wouldn’t have worked anyway!

The bullet would just pass through the ghost/spirit.

We’ve made it! And we know we wouldn’t want to be in Marcus’s position. If it were me, I would just close my eyes and cry. Oh wait, I now realize I’d be the cousin!

What did you think of this story? Have you ever experienced something similar? Let us know in the comments section below.