To what extent would you go to find out whether your significant other is lying to you or not?

In today’s episode of AITA’s Reddit thread, we came across a story of a guy, who pretended to be asleep just to find out whether his wife was lying to him or not. As obsessive and dramatic as it sounds, we would ask you to not jump to any conclusions till you hear the complete story. If you are not aware of what Reddit’s AITA thread is about, let us give you a quick overview before we can proceed with the story. AITA (Am I The A-Hole) is a Reddit’s thread where frustrated people would share their arguments to find out whether they were wrong or not. Yep, they would let the people be the judge of that.

Let’s proceed towards the story now! So the Husband decided to share his experience with the world to find out whether what he did was wrong or right. The story revolved around how his wife would complain about his cats and how his cats would wake her up and annoy her every night during sleep. And to find that out, he decided to pretend to sleep during the night and what he found out was ridiculous and he just couldn’t comprehend the situation. So, let’s go ahead and read the entire story to know what the whole fuss is about. Keep scrolling to continue;

1. Hmm… that is weird and honestly, it is kinda creeping me out too! 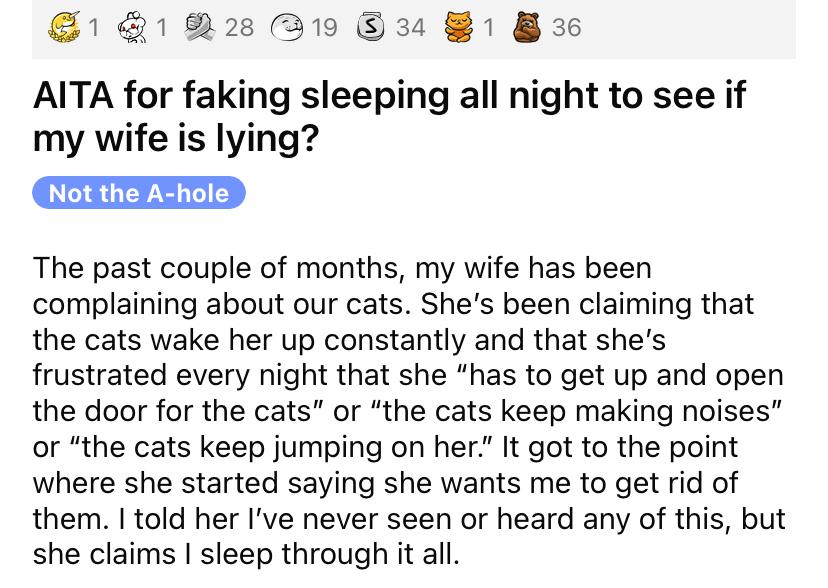 2. Don’t tell me she has been possessed or anything!? Yikes!

3. Yep, we are being anxious and creeped out too!

4. Okay so the guy observed his cats the entire night and they didn’t do anything. But why would his wife lie about it? What’s the purpose? 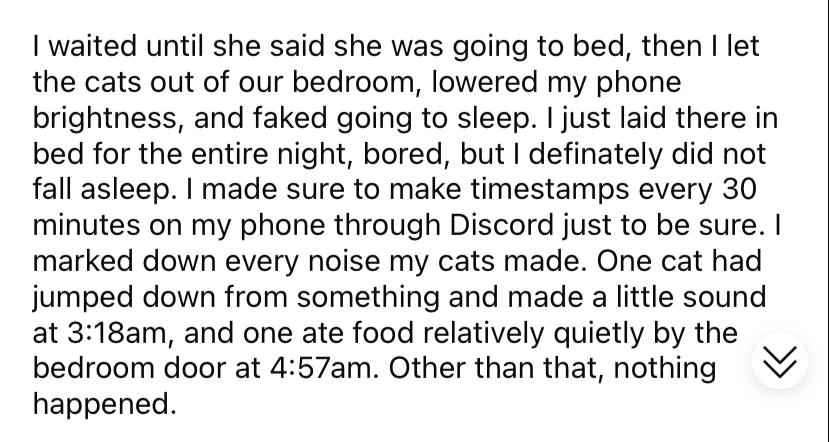 5. Wow! Why would she be that cruel? I mean if she’s having some mental disorder, that kinda adds up but why would she do all this without a purpose?

6. Okay, that is absolutely ridiculous how she’s getting all defensive about it and making him seem the bad guy. 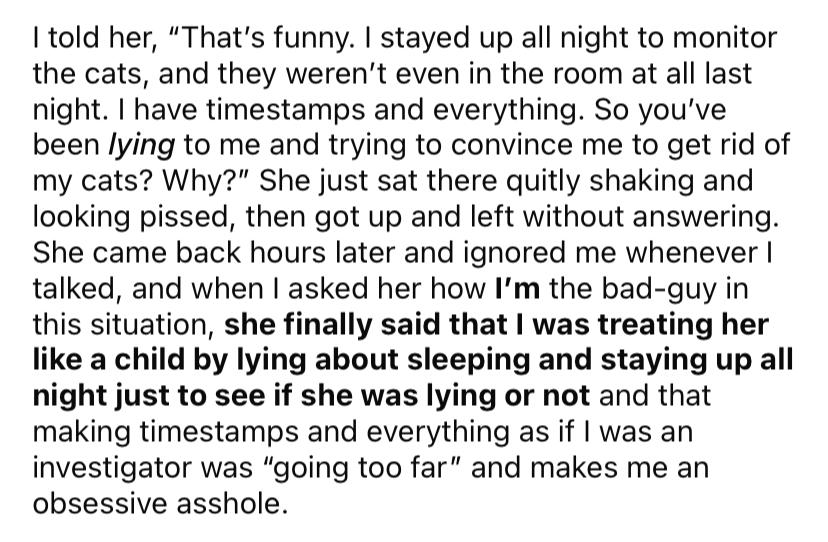 8. Well, for those of you who are wondering what Baker Acted means – It means that a person was admitted to a mental health hospital to be mentally assessed. The time a person can be held during the Baker Act is 72 hours. 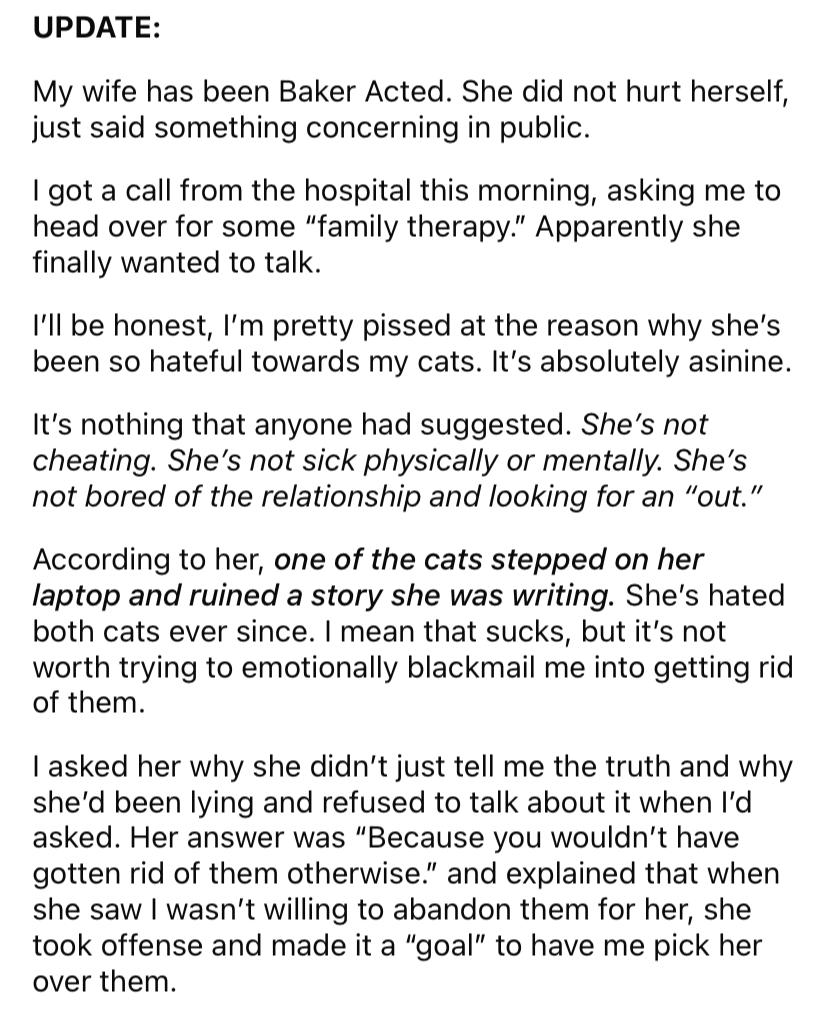 9. But that’s still ridiculous at her part. Although we think it would be too early for him to opt for a divorce and should give her another chance. 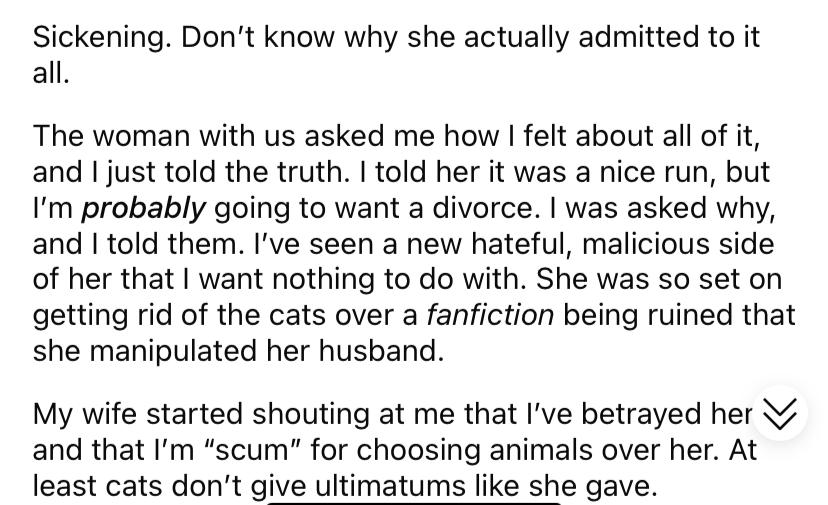 10. Nope, you are not the bad husband neither obsessive. But you shouldn’t file for a divorce, yes! Appears like people are suggesting him to do the same! 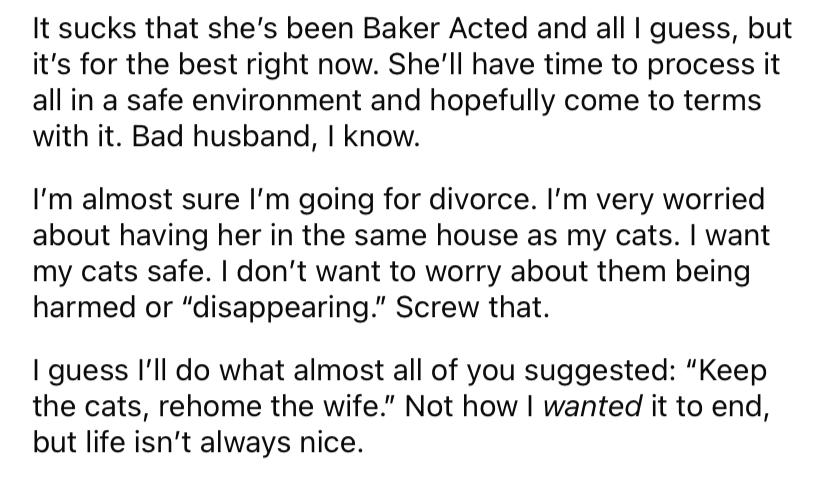 11. It’s fine, you didn’t have to explain it as to what she did was completely unacceptable! 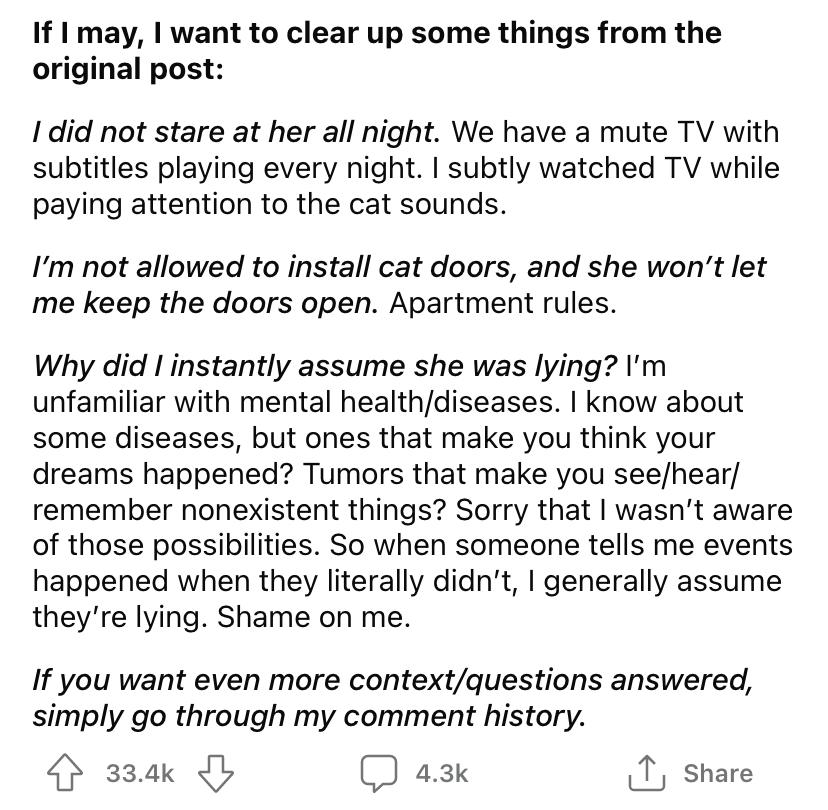 Oh well, let’s see what the people had to say about it!

This is a wise suggestion! 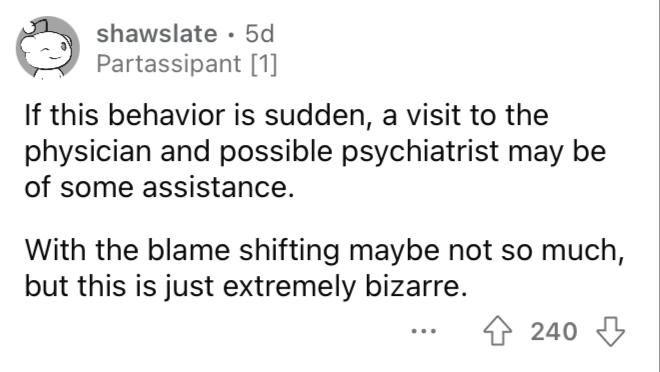 Gladly, he didn’t fall for it!

Type of people who would flip the blame onto you are the worst!

Exactly! But she decided to be cruel instead.

The bluff had to be called out!

Well, we are glad to see that people are supporting him but if he’s going to divorce her, that’s a drastic measure which he shouldn’t be taking right now and should opt to talk things out. However, we wish him all the best and would like to know about your thoughts and opinions regarding this whole fiasco! Feel free to use the comments section below.