Karens think everyone is a liar.

I don’t understand how this mentality came to be. I mean we have all read hundreds of Karen stories where they think that someone is lying to them when they say that they don’t work here. An employee will usually not lie and tell the truth but apparently, Karens have the worst luck and have met so many people who lie to them that they think everyone is the same. What else could be the reason for their behavior?

It also could be that they were lazy workers in their youth and they used to lie so they think that other people do similar things. However, they really should take people’s words at face value as it never seems to end well for them in these stories. Sometimes they get arrested while other times they not only get suspended from the store but will also deal with bodily harm. Now I am not saying that they don’t deserve it because they clearly do deserve everything they get.

This is one such story about a dumb Karen. So just scroll below to take a look for yourself.

The story starts off with some information that might not seem relevant at first but it clearly is quite relevant. 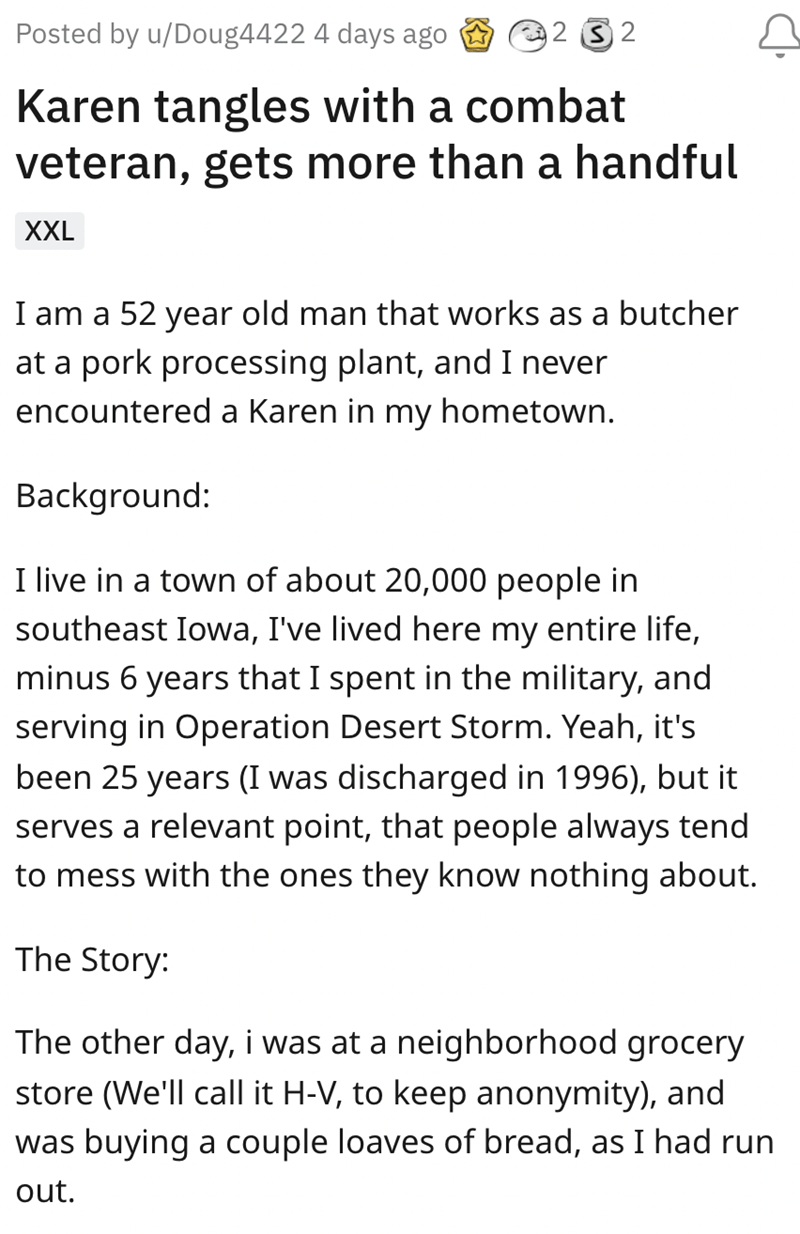 We understand that the uniform for this supermarket is highly distinctive so nobody should mistake a customer for an employee. 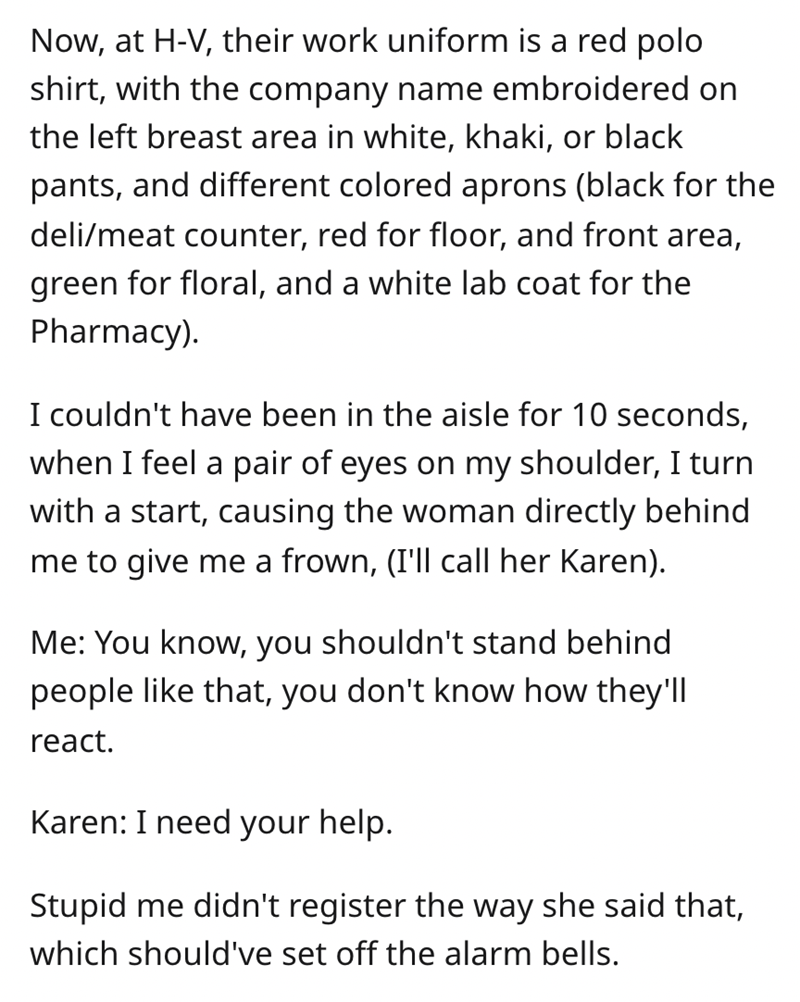 But that is exactly what happens when this idiot Karen approaches this guy ‘asking’ for help. 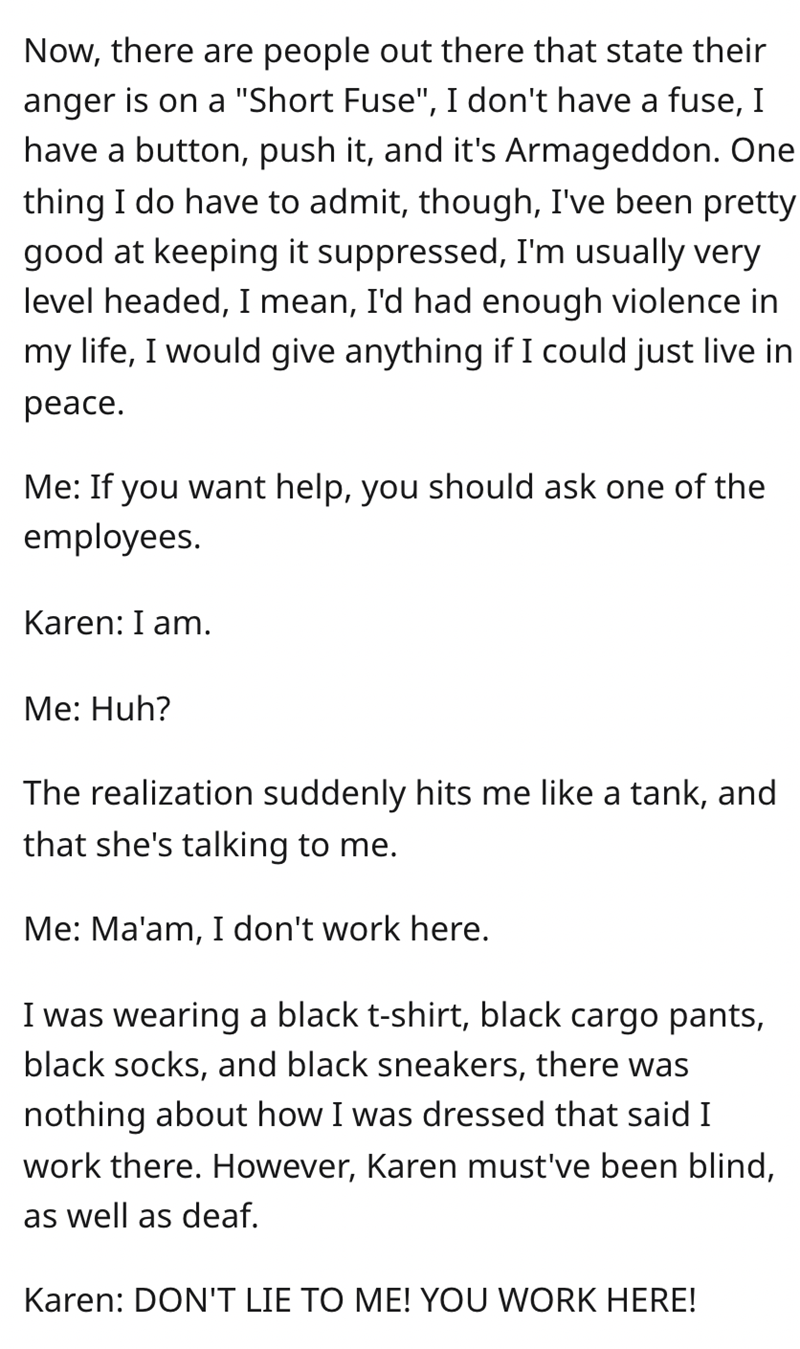 He had clearly reached his limit by now and wanted nothing other than to punch her in the face which is understandable. 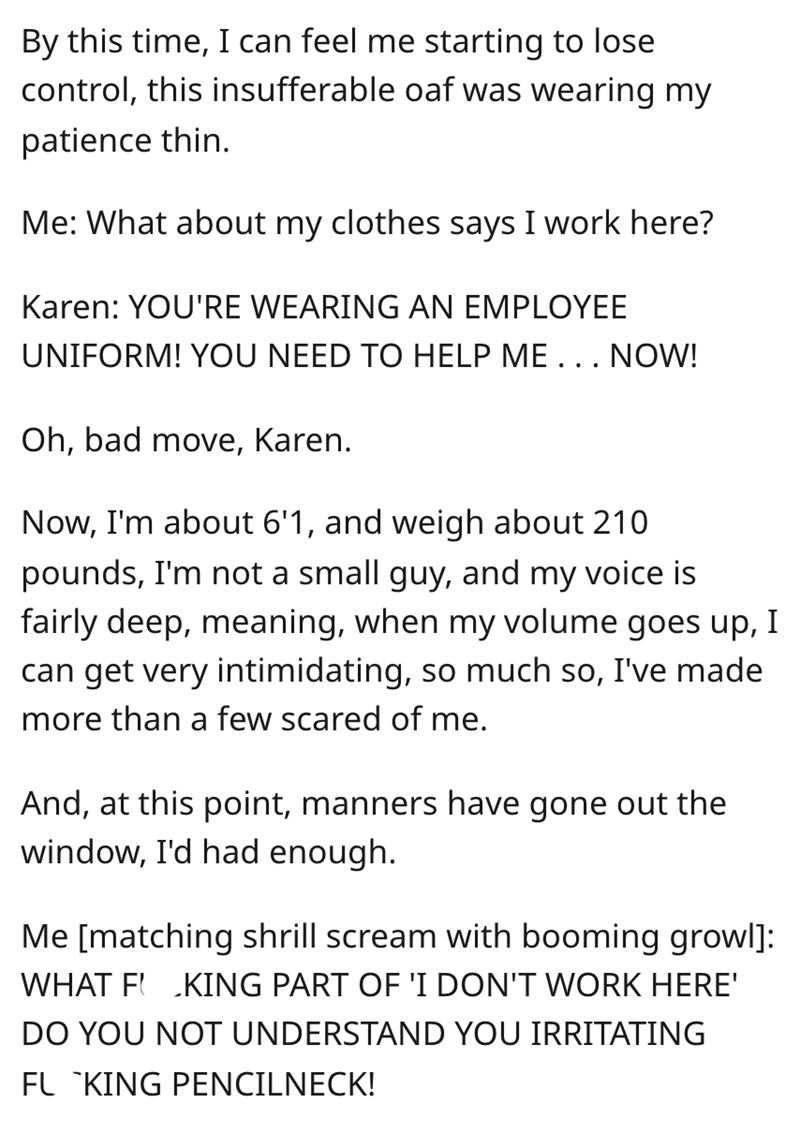 He even warns her not to take it further but she doesn’t heed his warning and slaps him across the face. 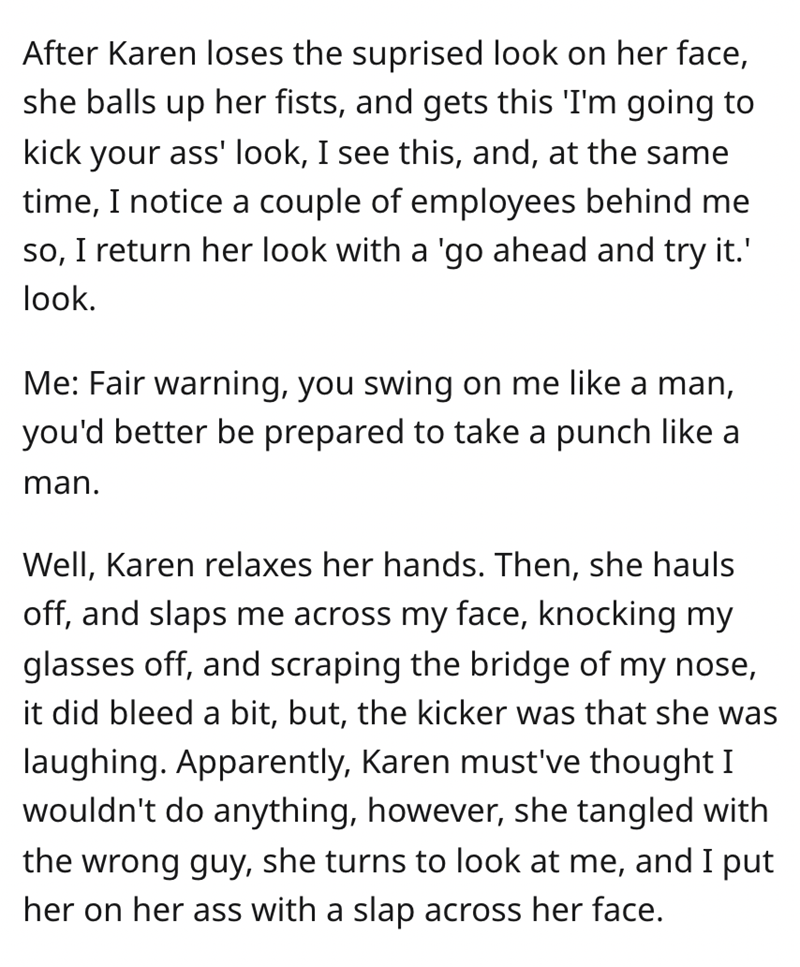 And with that, he leaves with his two loaves of bread and the Karen ends up getting suspended from the store. 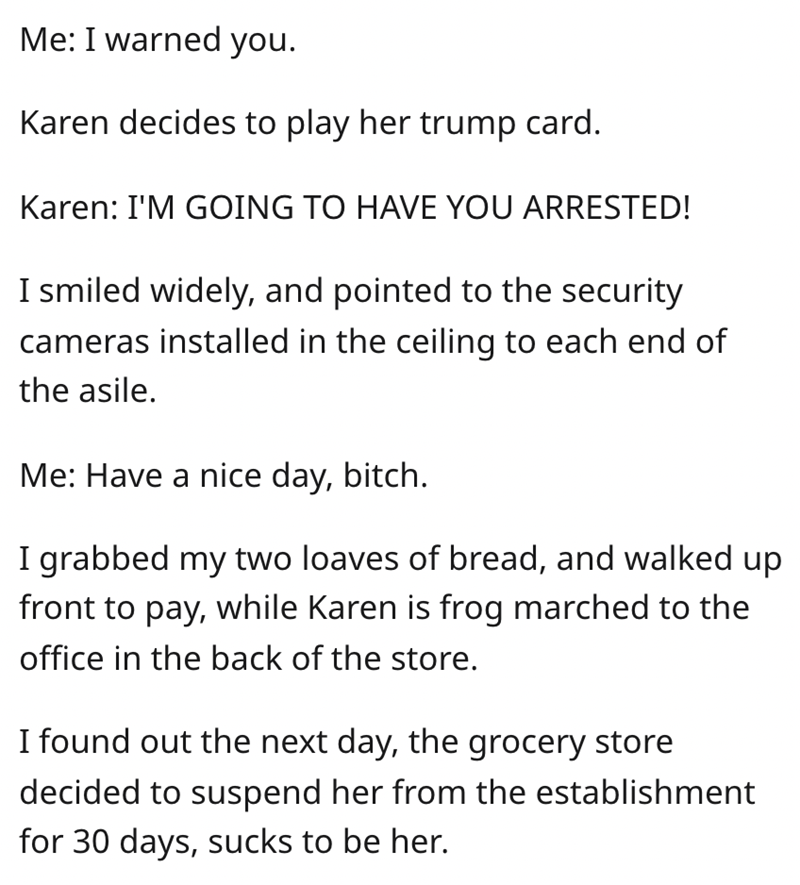 I understand that the title and the story are a bit out there so it is no surprise that a lot of people have called the poster out for lying. However, in my experience Karens like these really do exist and yes, they are complete idiots. Now, the poster might have exaggerated the truth a bi6 on how he dealt with her but I am pretty sure that he did encounter this woman. Why did she slap him? I have no idea but she lived to regret it so she should have thought before she employed that tactic.

People in the comments were a bit confused as to why she was only blocked for thirty days and not more. 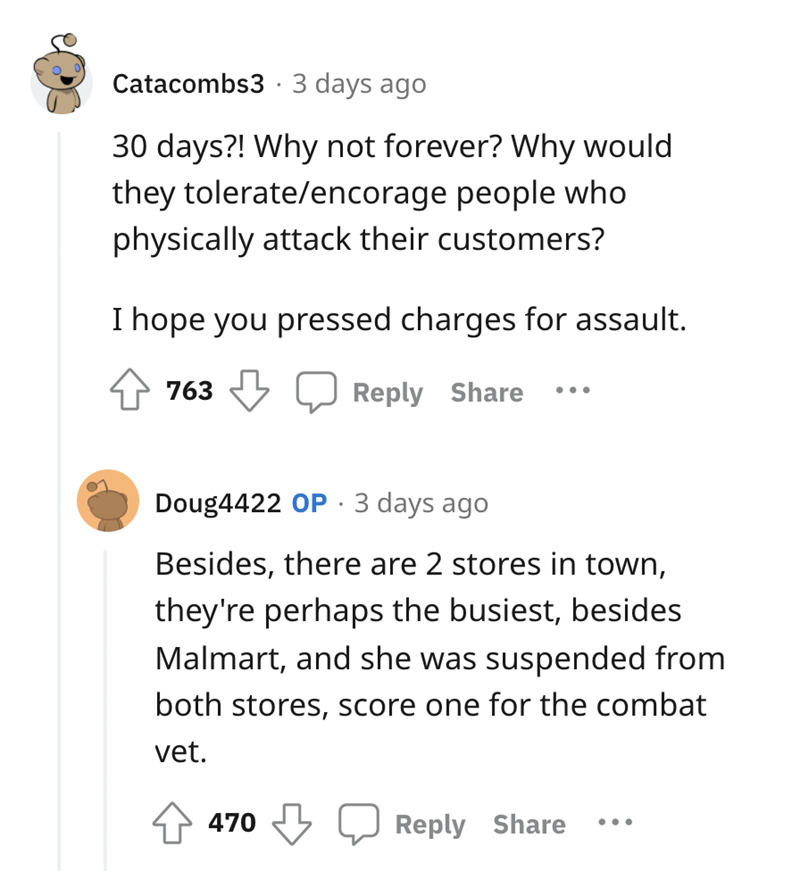 Some people even shared their own experiences with Karens and as it turns out, they are much worse. 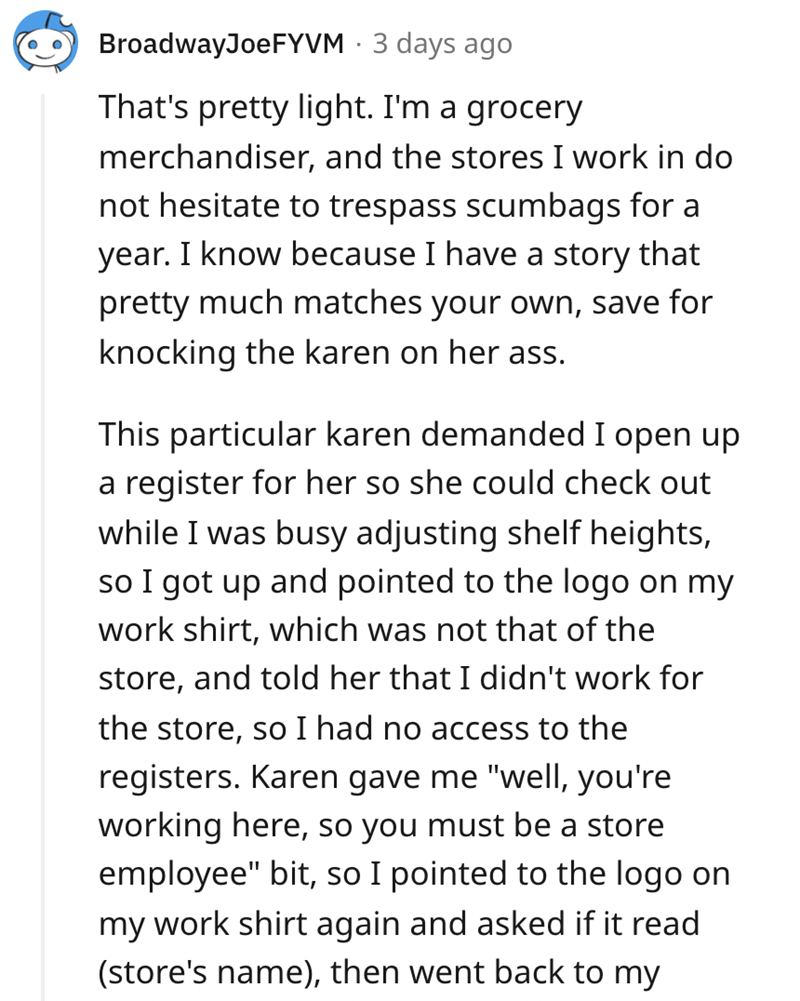 Honestly, Karens like these are also the ones who don’t want to wear a mask so I am assuming the latter did happen. 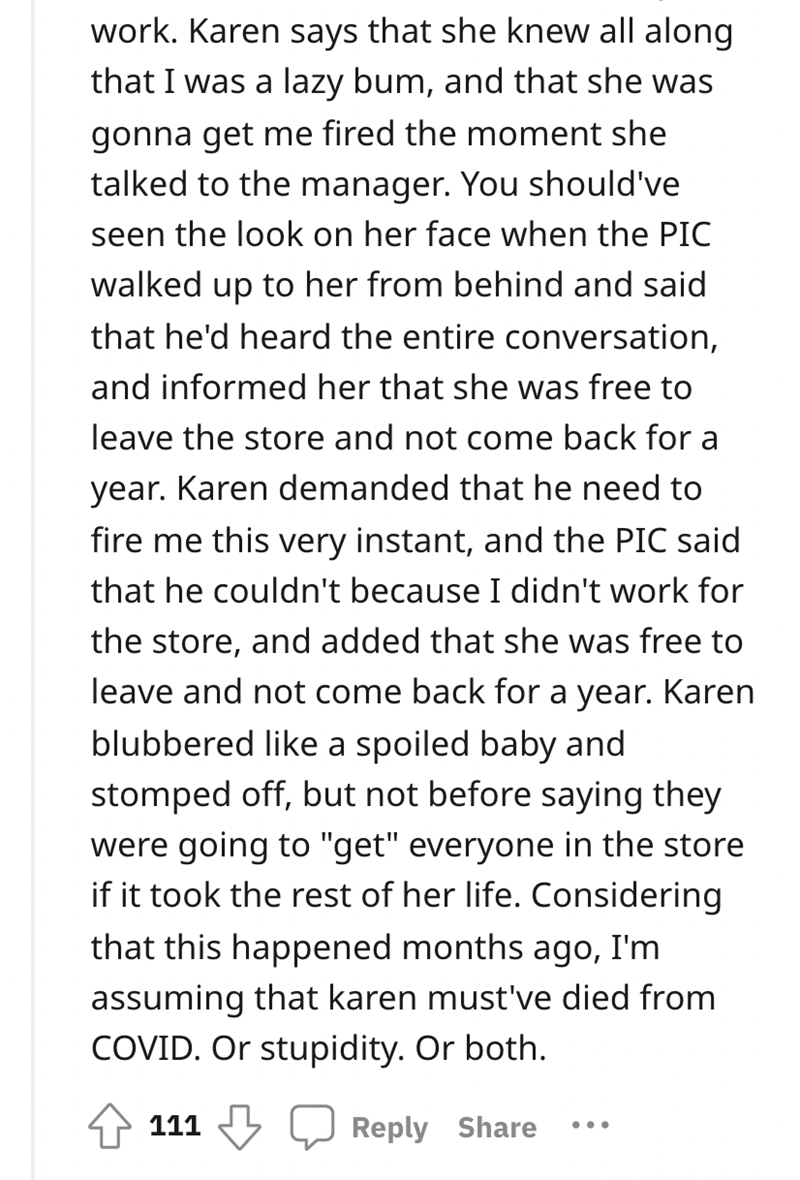 However, there were also a few people who were suspicious of the story. 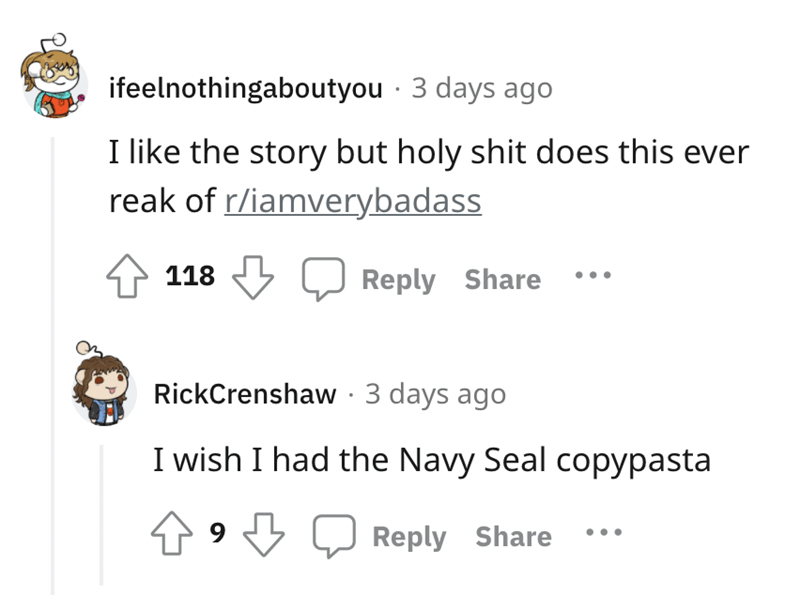 And called the poster of this story out for exaggerating or lying. 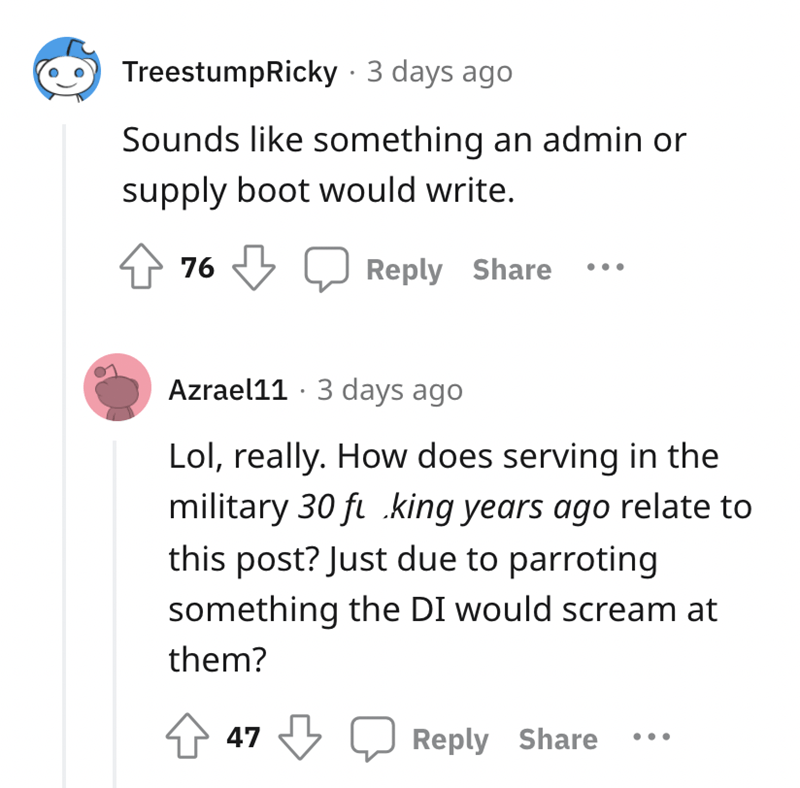 I can understand why people wouldn’t believe it but I have seen Karens act exactly like this and then claim to be a victim. 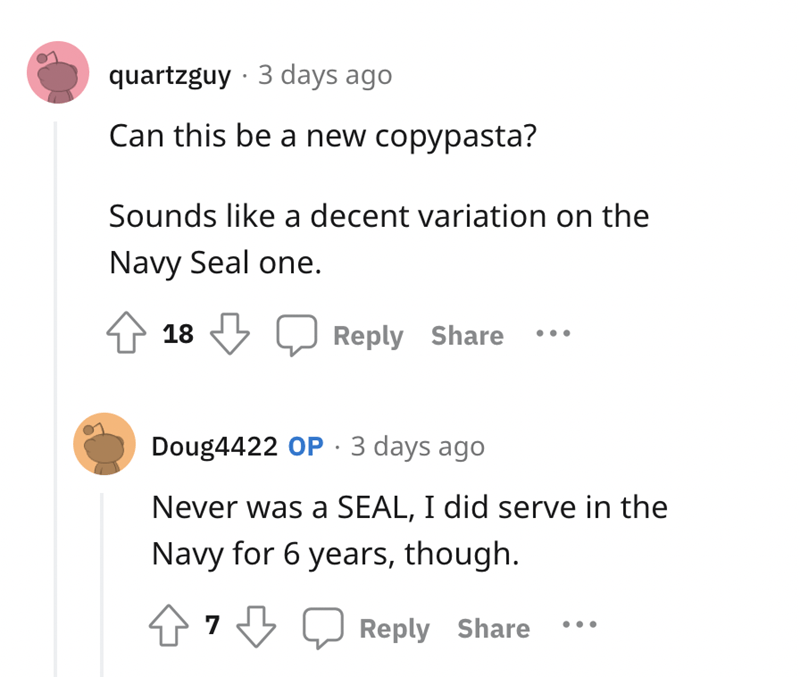 To be fair, the way he worded his inclusion is a bit suspicious but it is his story at the end of the day. 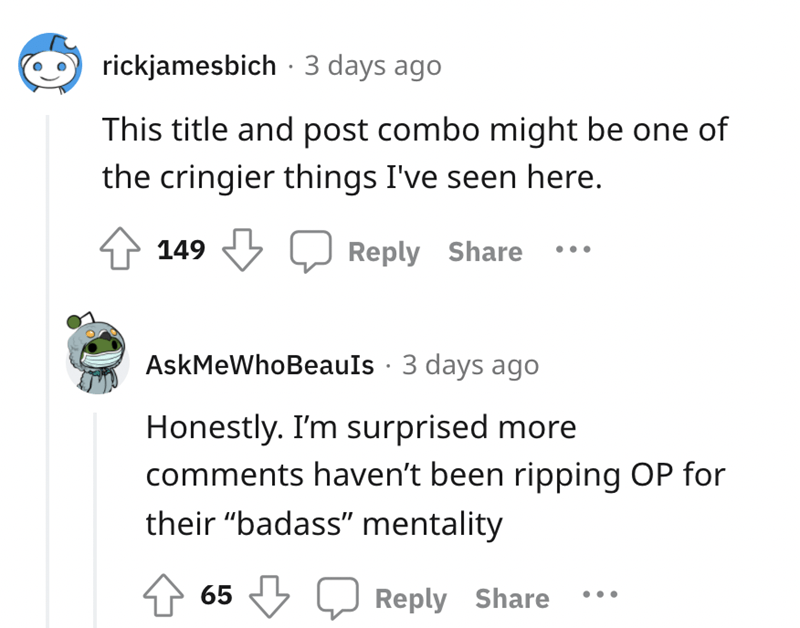 Other people were more concerned that he did not press charges as she needed to learn her lesson. 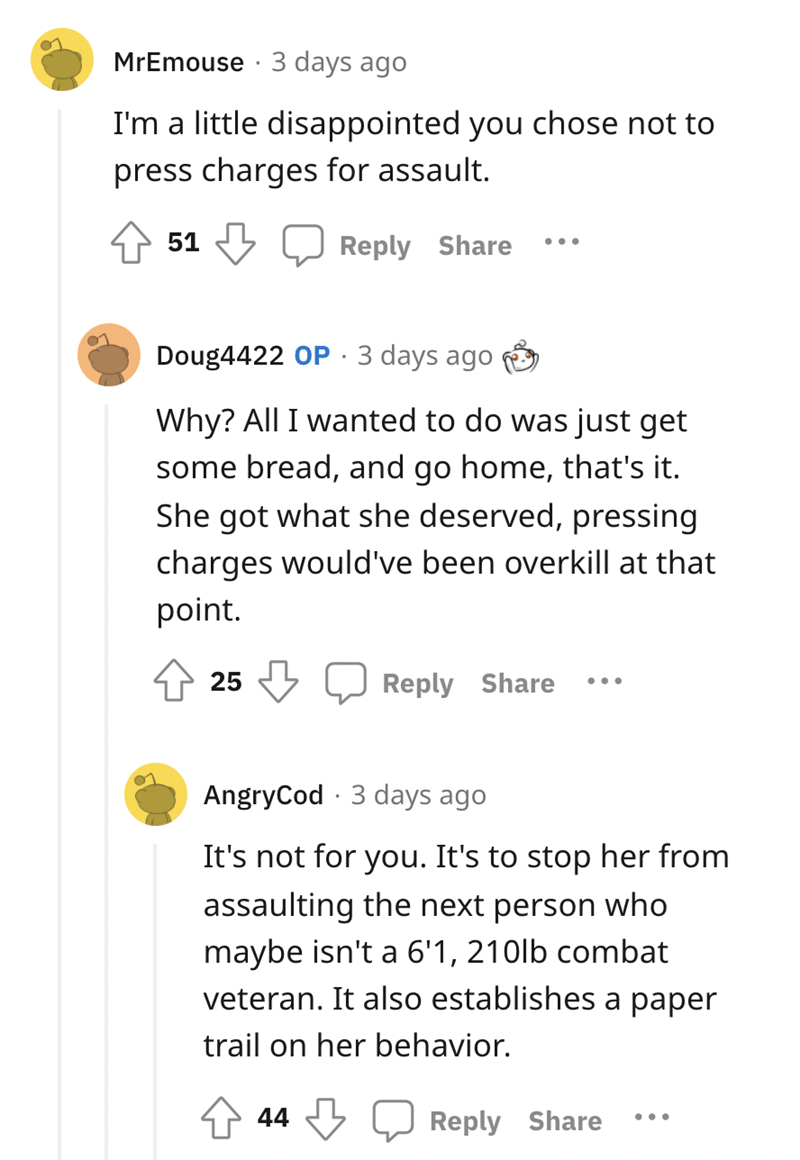 What are your thoughts on this story? Do you think this happened exactly as told in this post or do you think it is a bit exaggerated? Comment down below to let us know. And don’t forget to share this story with your friends so they can join in the discussion as well.