When someone said Karen, we usually pictured a woman with a weird haircut who is not only pretentious but also thinks that she is better than everyone. However, nowadays, it seems that Karens are taking their rude behavior to a whole new level. Not only are they fine mistaking someone for a worker but they also basically argue with them when that person explains the mistaken identity.

However, today we have a thief Karen. Well, I wouldn’t call her a thief as she basically hurt another person who was minding her own business on a mobility scooter. The reason? Well, the Karen thought that the scooter was from Walmart, and apparently, that made it okay to push this woman off and call her fat and lazy. I have no idea what this Karen was thinking but you can read the whole story for yourself by scrolling below.

I have encountered a Karen once or twice but some people take it to a whole new level. 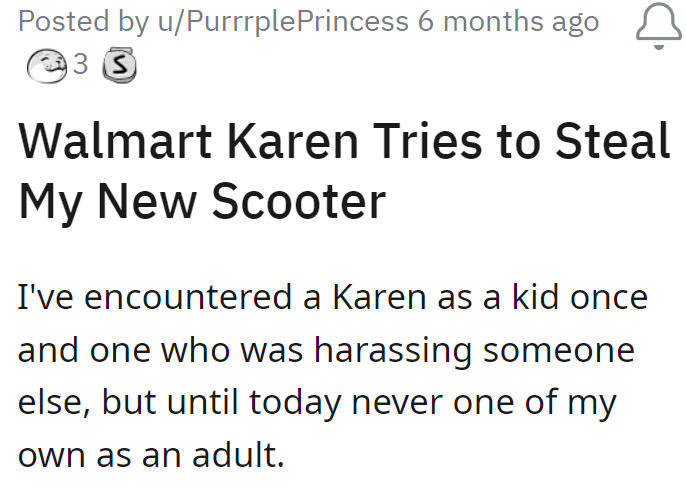 I was not aware that Karens love mobility scooters but we learn something new every day. 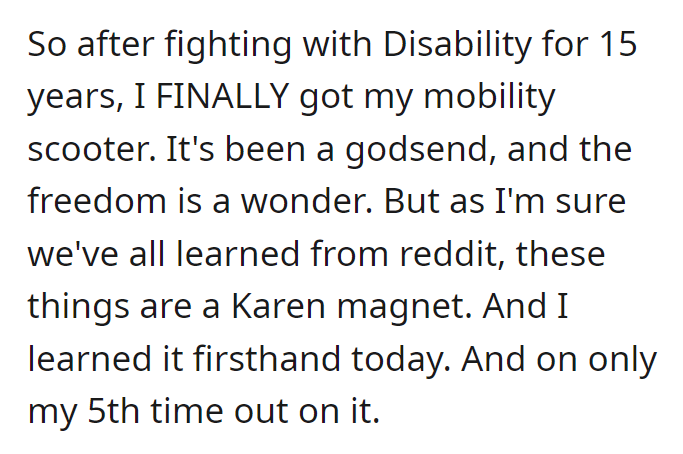 The woman goes on to explain how Walmarts own scooters are all either broken or not even present anymore.

So she was basically just minding her own business when this woman came out of nowhere and pushed her to the ground. 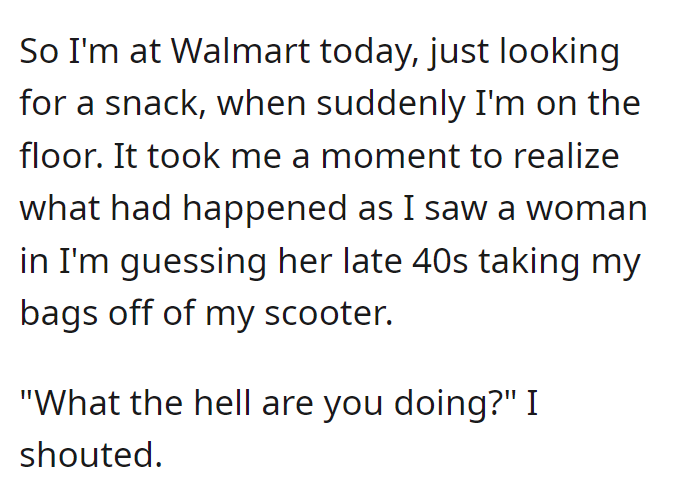 Rather than just taking it or arguing with her, the woman knew that the best decision would be to call the police. 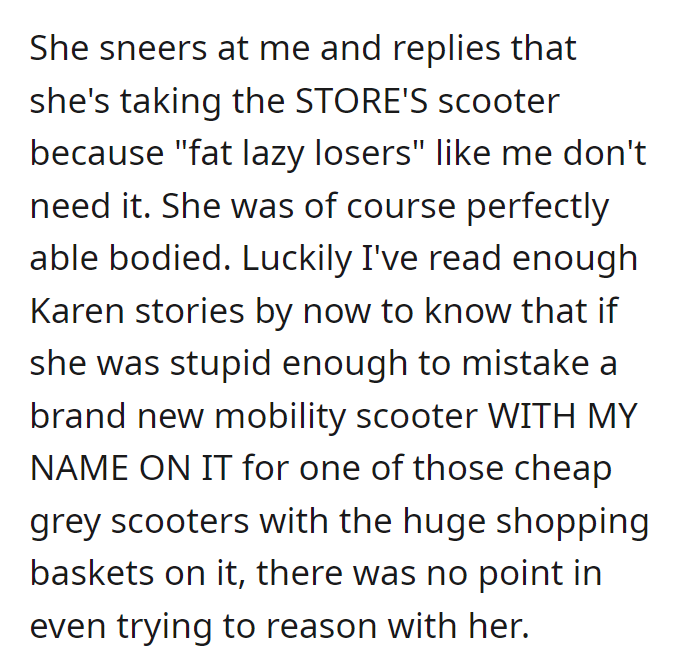 So that is exactly what happened and security came to her defense almost immediately even though the Karen tried to run away. 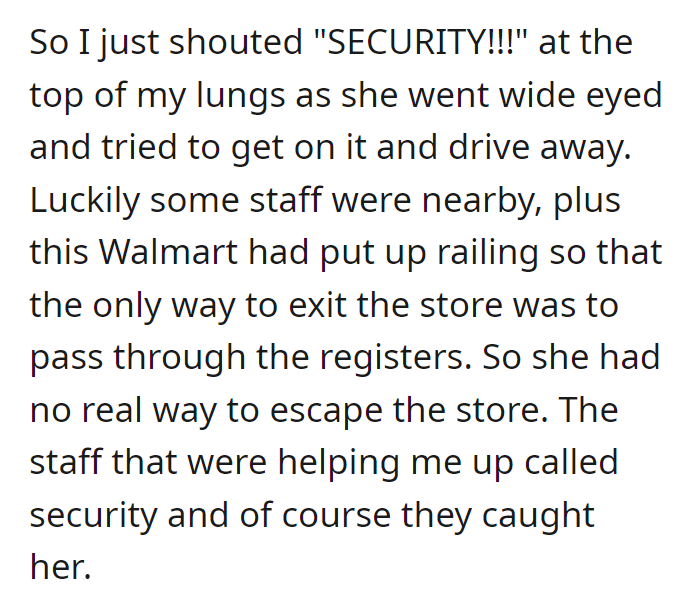 Not only did the Karen get caught but this woman also got a gift card which is a win-win in my book. 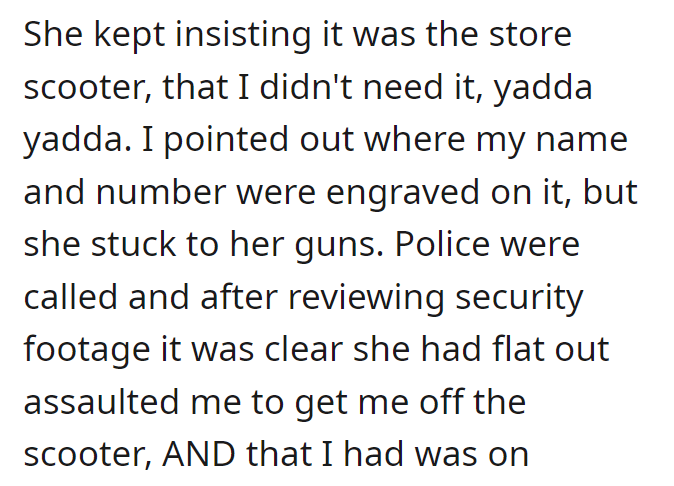 Thankfully, she didn’t suffer from any heavy injuries and everything turned out fine.

I am glad that the Karen got caught and has to pay a heavy fine. After all, she did hurt another person. What I can’t wrap my head around is the fact that even if the scooter was from Walmart, is it really a good idea to push someone off it? Did the Karen really think that things would go her way? Even if the scooter wasn’t the woman’s, the Karen would still be charged with a**ault so there was no way out of it.

We also get a little bit of information as to what will happen to the Karen and it is just as glorious as it sounds. 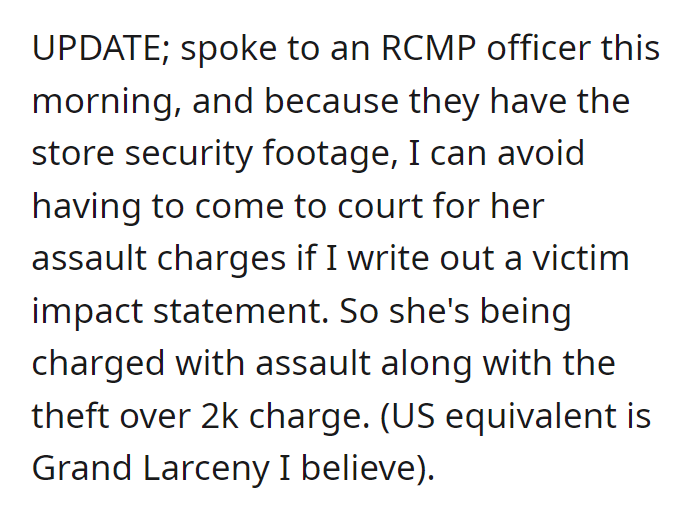 She however did not want to sue the Karen as it did not seem worth it for the hassle she would have to go through. 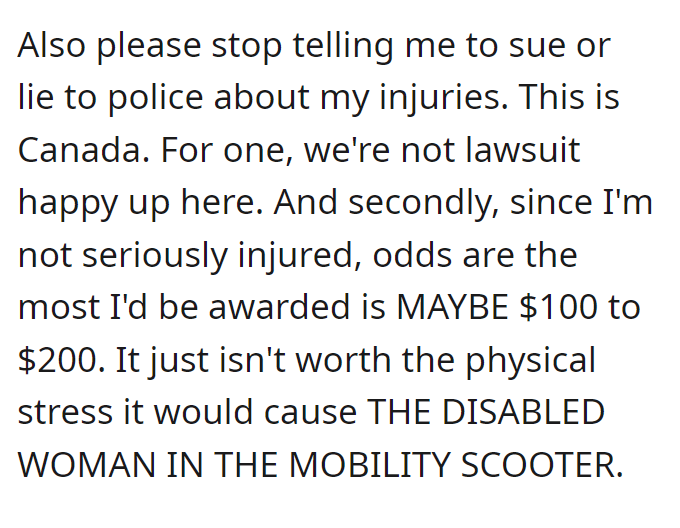 She isn’t wrong. She is disabled and the mental and physical stress of going through a case hearing is enough to put off most people from suing others especially when it is not even worth it other than being petty. 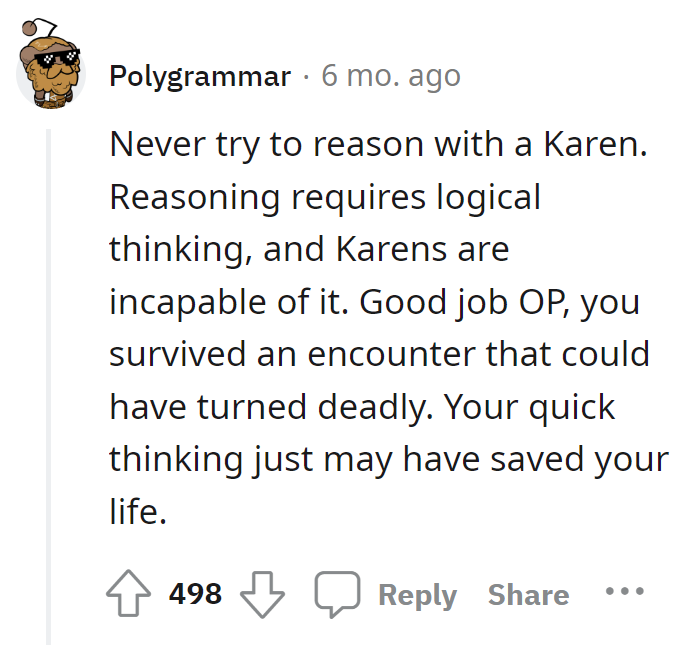 What are your thoughts on this? Has something similar ever happened to you? If so what was your response to this situation? And if it hasn’t, what would you do if you ever got caught in this sort of situation? Let us know in the comments below.