Sometimes giving up your own comfort for others and helping them without any personal benefit or reason is an extremely generous thing to do. It doesn’t cost you anything, but definitely earns you great respect. Unfortunately, some people don’t understand the importance of this basic decency. They just have to have a mean reaction to everything and think a little too selfishly. However, sometimes people are just tired, frustrated or having a bad day. They are not selfish or mean on purpose. It’s just not the right day to mess with them.

Knowing what to say and when to say has a great impact. The most important skill to master in order to live a successful life is surely communication skill. Sometimes the most highly educated people are living a life of a nobody and someone who barely made it through high school is going around influencing others just because they the have a great communication skill. So here we came across a Reddit post on the subreddit “Am I the a*shole”  about a man who had a long day at work and was too tired to give up his seat for a pregnant lady. Not only did he refuse, but he said things about her and her choice of having a baby, that he shouldn’t have said. Scroll down to read what he said.

OP is mostly on foot through out his 10 hour shifts. 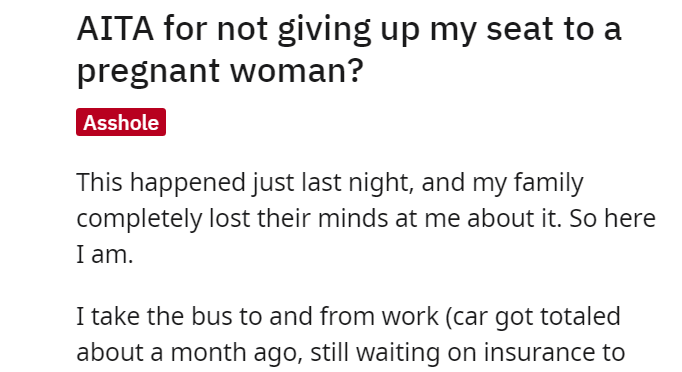 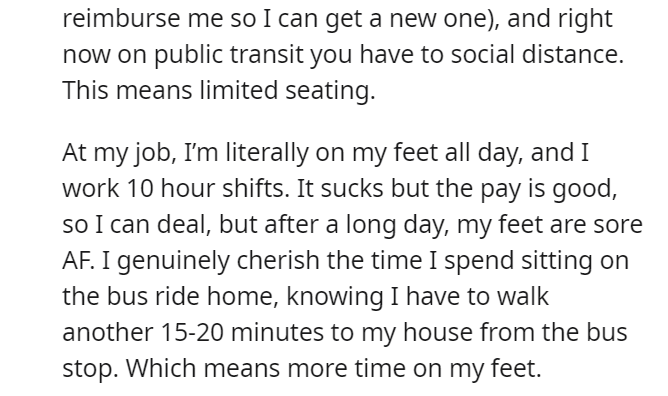 OP said no and the lady started to cry. 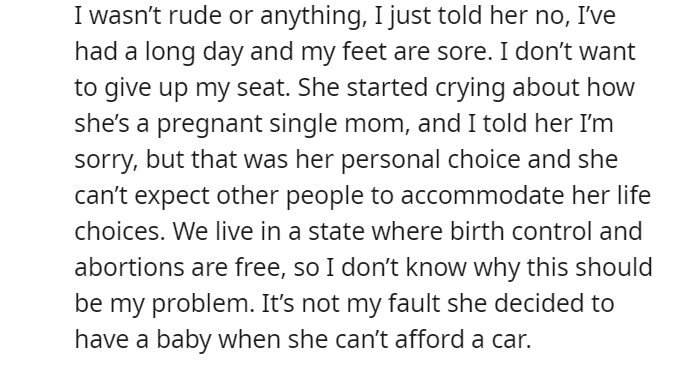 An old man gives up his seat for the lady. 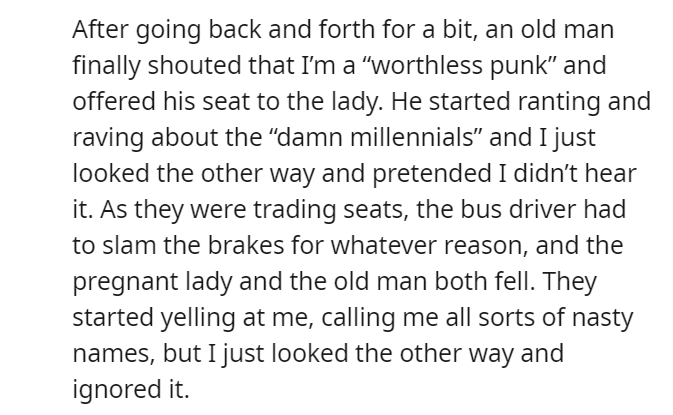 Everyone is mad at OP.

We understand that the OP was tired and he told the pregnant lady no, but questing her choice of having a baby is altogether extremely wrong. Saying that abortion is free and that it’s not his fault that the lady is having a baby but doesn’t have a car is off the bat disgusting. Just like the lady had no clue that OP worked 10 hour shifts and he’s mostly on foot throughout the day and is too tired to give up his seat, OP has no clue what the woman was going through and what her struggles were and why she was riding a bus. You just can’t make such a pathetic comment about someone you have no idea about. Maybe she does have a car, but had some emergency that made her take a bus. No one knows. Redditors didn’t back down and they openly shared their opinions about this matter and here’s what the think. Scroll down to read the comments.

Being nice to someone doesn’t cost a thing. 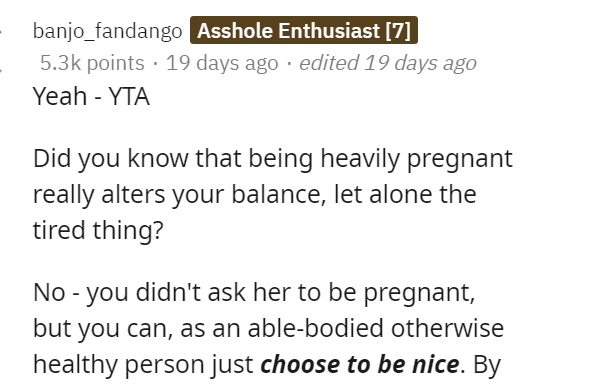 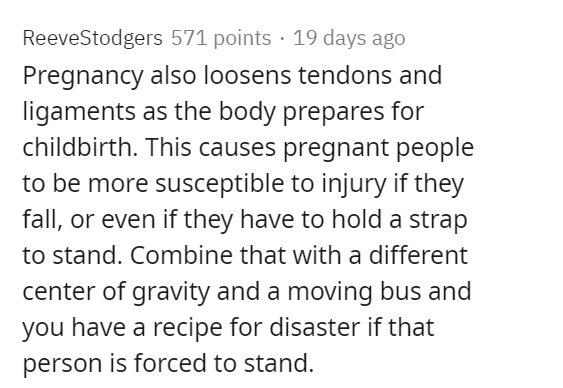 It sure did make the OP look ugly… 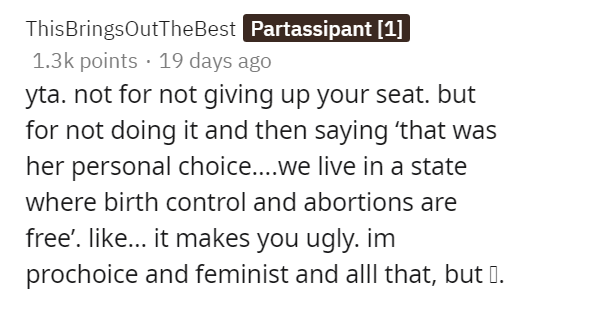 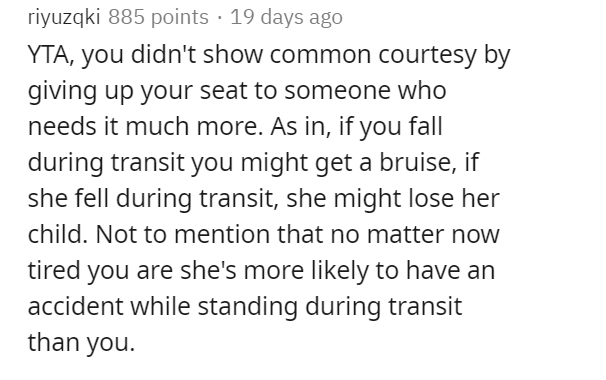 That’s why they are given extra care and attention everywhere.

The least one can do is be nice. 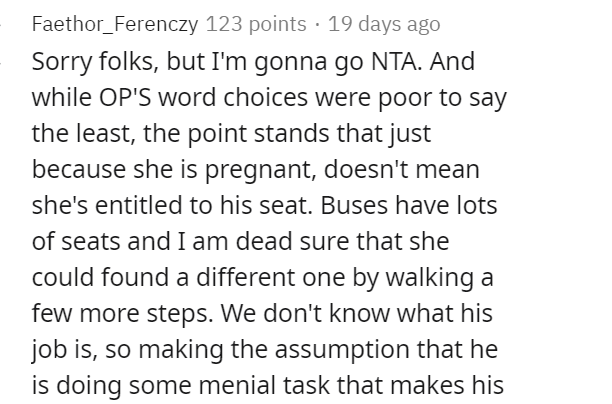 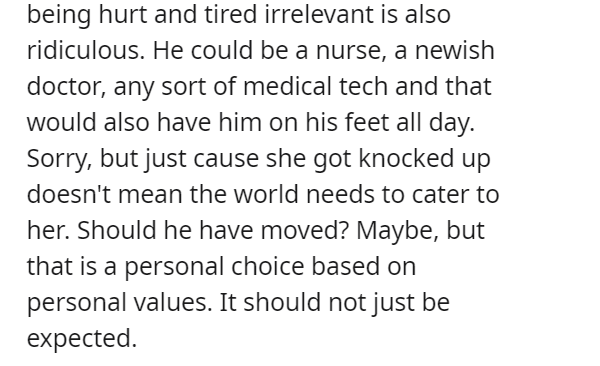 We hope that the pregnant lady and the elderly man were not hurt. Maybe the OP was right, but unfortunately what he said, clearly made him look guilty and rude. It is included in the basic social manners to give up your seat to an elderly person, pregnant woman or a disabled person. On the other hand, no one has the right to make such harsh comments about someone’s choice of having a baby and abortions. What do you guys think about this? Let us know in the comments below.