If you’re three minutes late once, your boss can take a deep breath. This school support staff member refused to let his management harass him after he arrived at work only slightly late for the first time. This discussion was started by user u/ohmydayzz on Reddit’s r/MaliciousCompliance subreddit, who recounted his experience about how he learned the hard way not to give up any more free time without remuneration.

Here are the details. This staff member typically shows up to work 15 minutes early and always gets started immediately, per his manager’s orders. When he showed up three minutes late, and continued with his morning routine of making a coffee in the staff room before beginning his work, his manager berated him. To make matters worse, the manager got upset after the staff member took his full unpaid 45-minute lunch break the next day. This was the breaking point for u/ohmydayzz, who stood his ground and from that point on, never allowed his manager to bully him into starting work early or working during his required unpaid breaks.

1. This is the story of OP who works as support staff at a school and arrives on time. His usual task is to make coffee once she arrived 3 minutes late with her coffee the manager could not take it 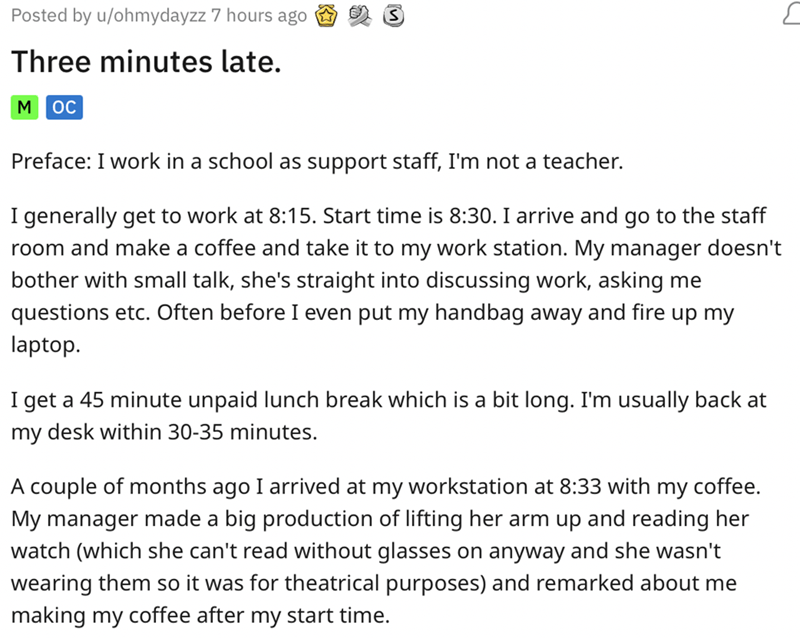 2. To cover the previous thing, OP arrived sooner after lunch but the next day when she was on time the manager was unhappy. They both talked into it. OP told her how she gives her free minutes to the workplace for free 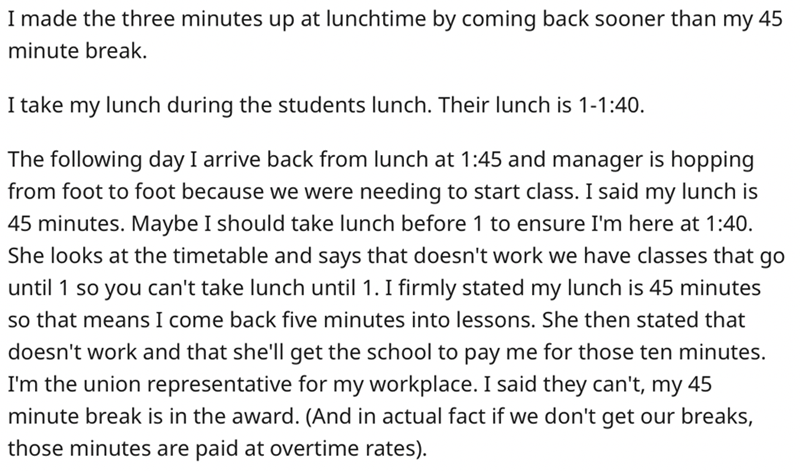 3. OP stood her ground and started taking the whole 45 minutes lunch break and arriving on time in the morning just because she was annoyed by the manager’s snarky remark. There’s a TLDR for people at the end

Advertisement
Via ohmydayzz
So, this was the story shared by OP. If her manager was not rude enough to scold her for being literally 3 minutes late, it would have been easier for the both of them. Now that you have read the story, take a look at what Redditors had to say on this. Following are the top comments by various Redditors under this post.

4. This is what most people would do when they are treated with petty sh*t and I think that’s fair

5. When it comes to your self-respect and fairness in something, you should not think twice before thinking if the other party is not showing a basic understanding

6. This is true in many cases. Do you find it relatable?

7. Only if all manager were polite and understanding enough to not be a-holes that they most of the times are

Advertisement
Via botts31
Share your thoughts with us on this story. Also, tell us if anything similar happened to you. We hope you are liking our content, if you do, keep visiting and supporting us.