We are all aware of the fact that people think tiny women are easy targets. They may look vulnerable and can be taken advantage of. But everything is not as it seems. People are so much more than just their physical appearance. Someone’s body appearance or looks can not say anything about them. They could wear biker wear and be a complete softie on the inside. Or they could wear cute, frilly dresses and still be a mean, baddie. You will never know unless you talk to them and get to know them a little. We all know that most mechanics think women do not know much about vehicles. So every time a woman shows up at their workshop, they try to take advantage of them and scam them. They tell them problems in the car that do not even exist. All this is done just to make more money. It may work on a few people as some people generally do not know much about their cars but mechanics can not pull that off with just anyone. Sometimes there is so much more to people than what they look like. Something similar happened with this tiny, blonde woman who took her car to the mechanic. Fortunately, she knew a thing or two about cars because her father and brother were both mechanics. She had checked the basics of the car herself before she took it to him. The mechanic, trying to scam her, told her that the car would have to be broken down and destroyed if she did not fix some things immediately. She knew he was lying, so she humiliated her publicly. Scroll down below to read how it all happened.

Op tells us about how she looks and anyone can mistake her for not knowing much about cars because of her looks. She mentions to most of our surprise that she actually knows a little too much about them because of her father and brother both being mechanics. 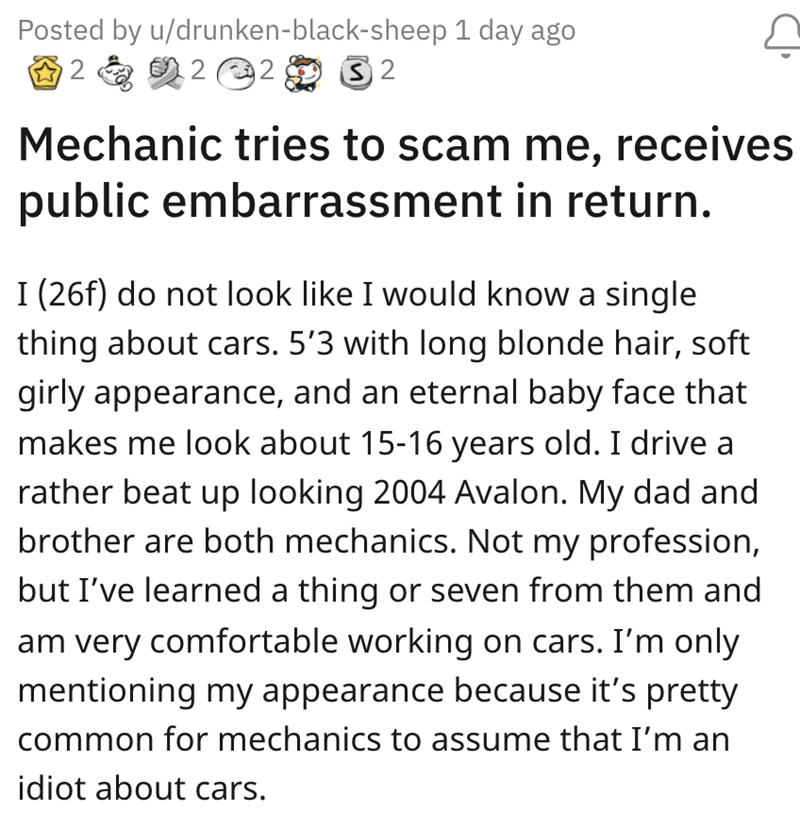 She details to us her own thorough inspection of the car and how it was functioning fine. Her father also assisted her with whatever help she needed with the car. So the car place offered a free inspection on oil change and she was up for it. 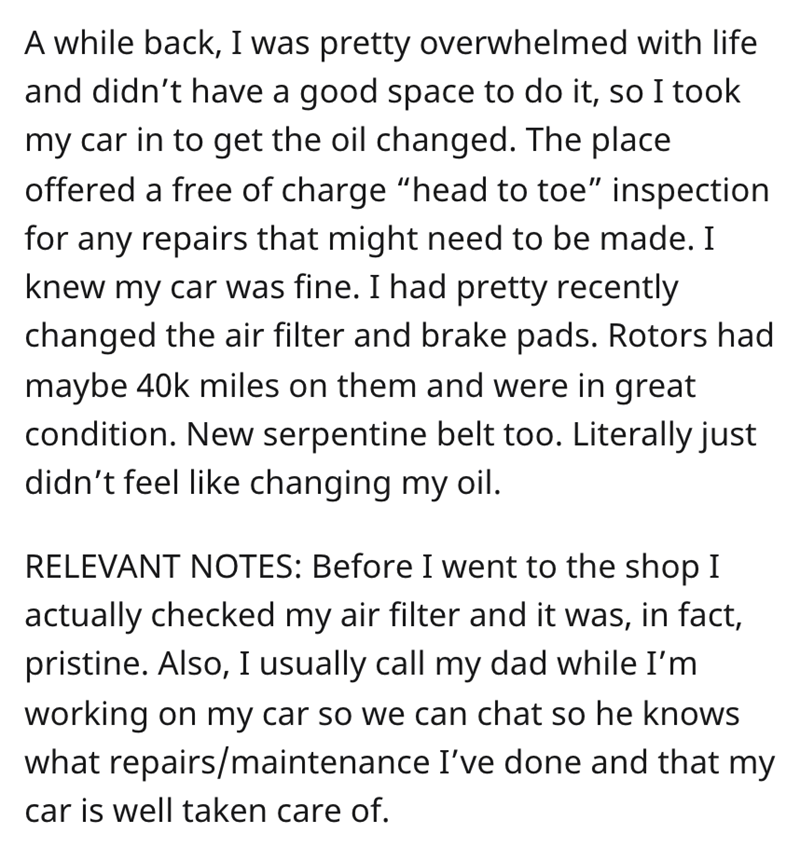 The mechanic gave Op a very troublesome look and told her a slew of issues with her car and it was costing close to 1500 bucks. However Op had backup and she didn’t fall for his lies, she instantly called her dad. 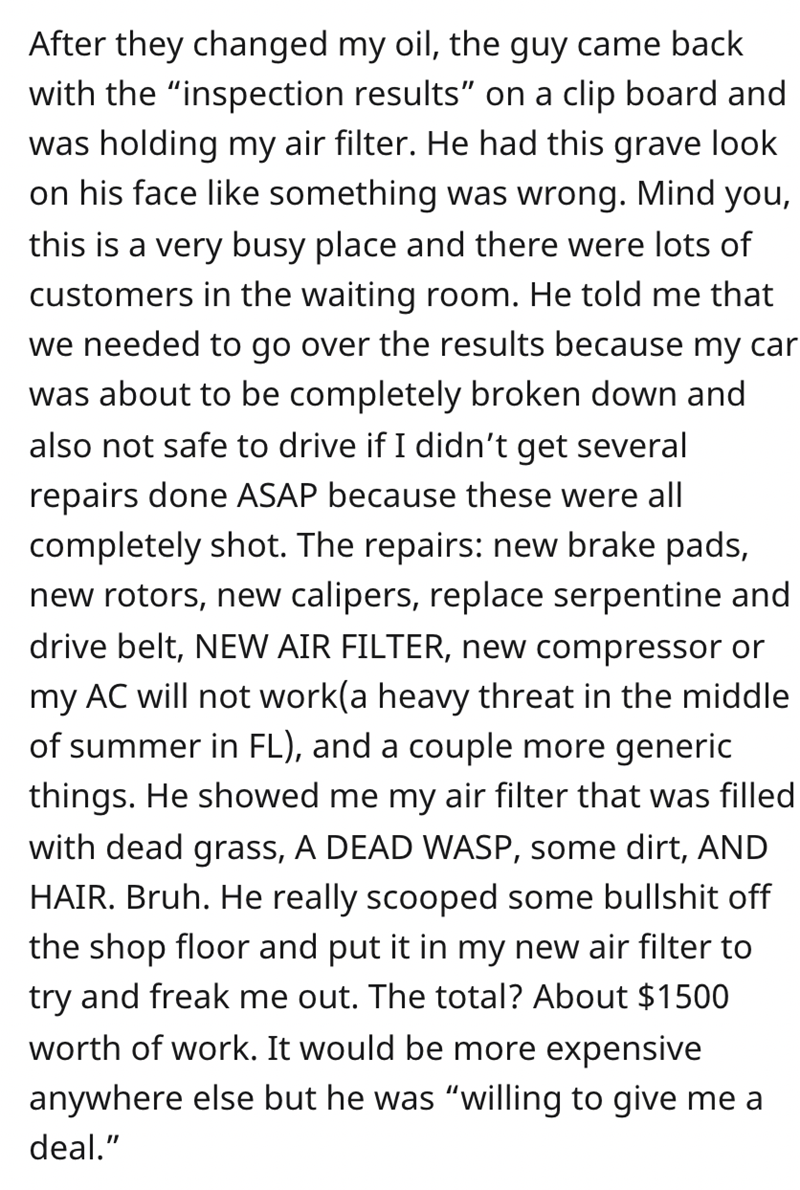 She played along at first and later called her dad so he could directly talk to the mechanic, the dad played along too sounding as if the car actually needed a lot of work. The mechanic kept on convincing him in detail so Op pays for the repairs however the pair of Op and her dad just made fun of the situation while the mechanic tried his best to extract money out of them. 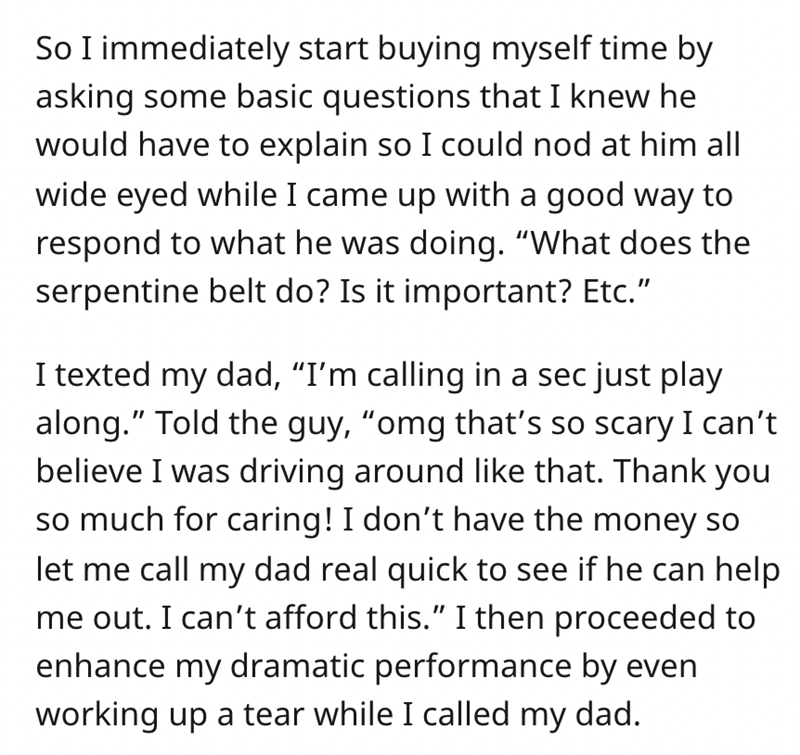 And the playing along continues. 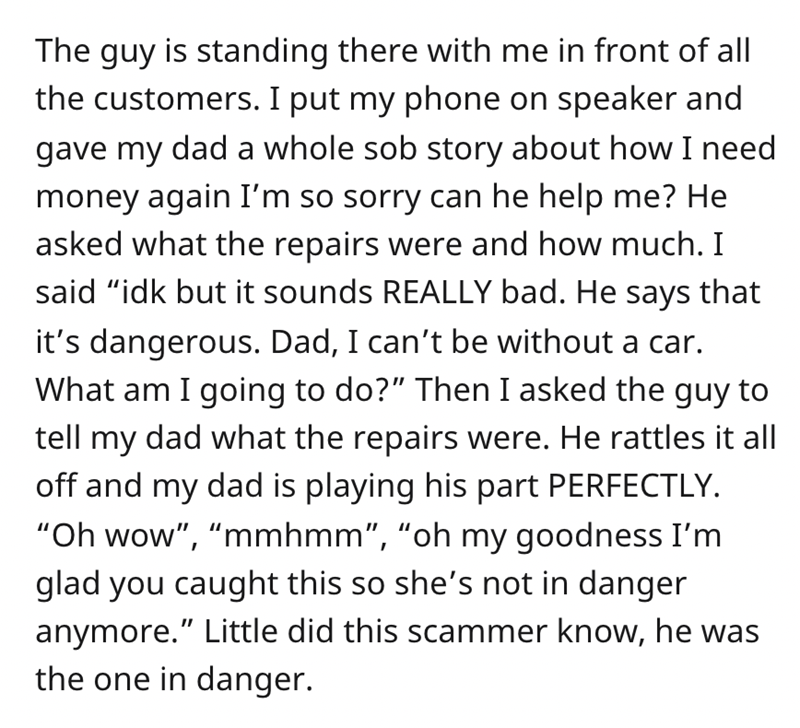 They both started laughing at whatever the mechanic had told them and the scammy mechanic only got angry at at the situation. 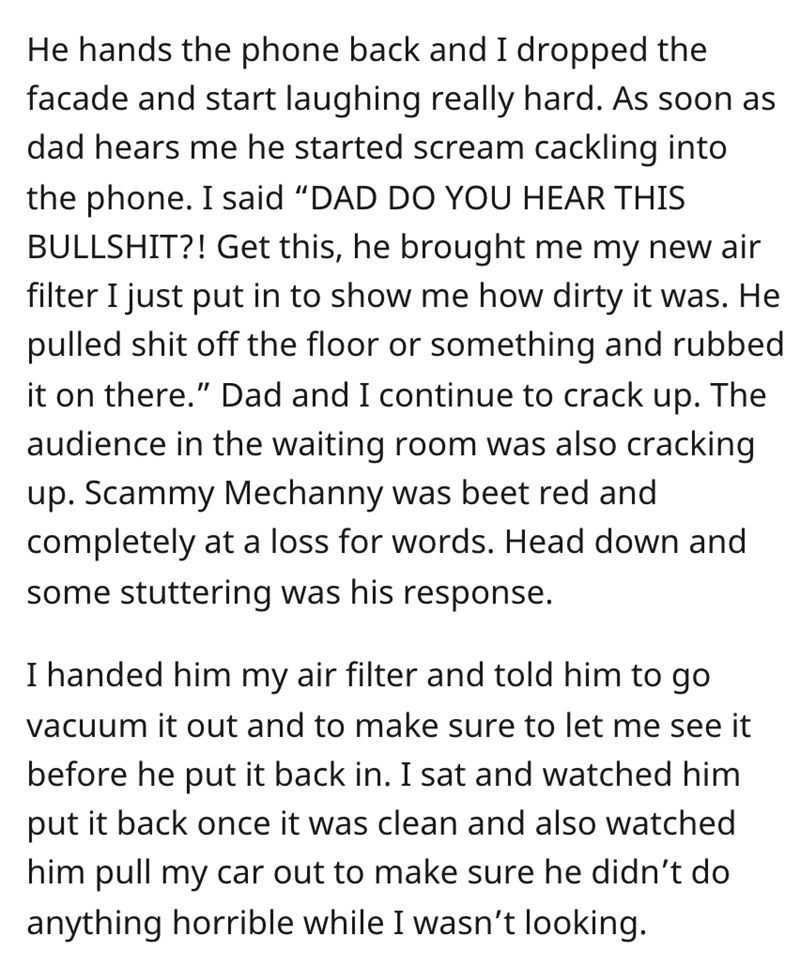 And Op along with getting her car’s air filter fixed gave us a very valuable lesson on how not to trust mechanics who can give you a hefty bill for absolutely nothing based on how you look. 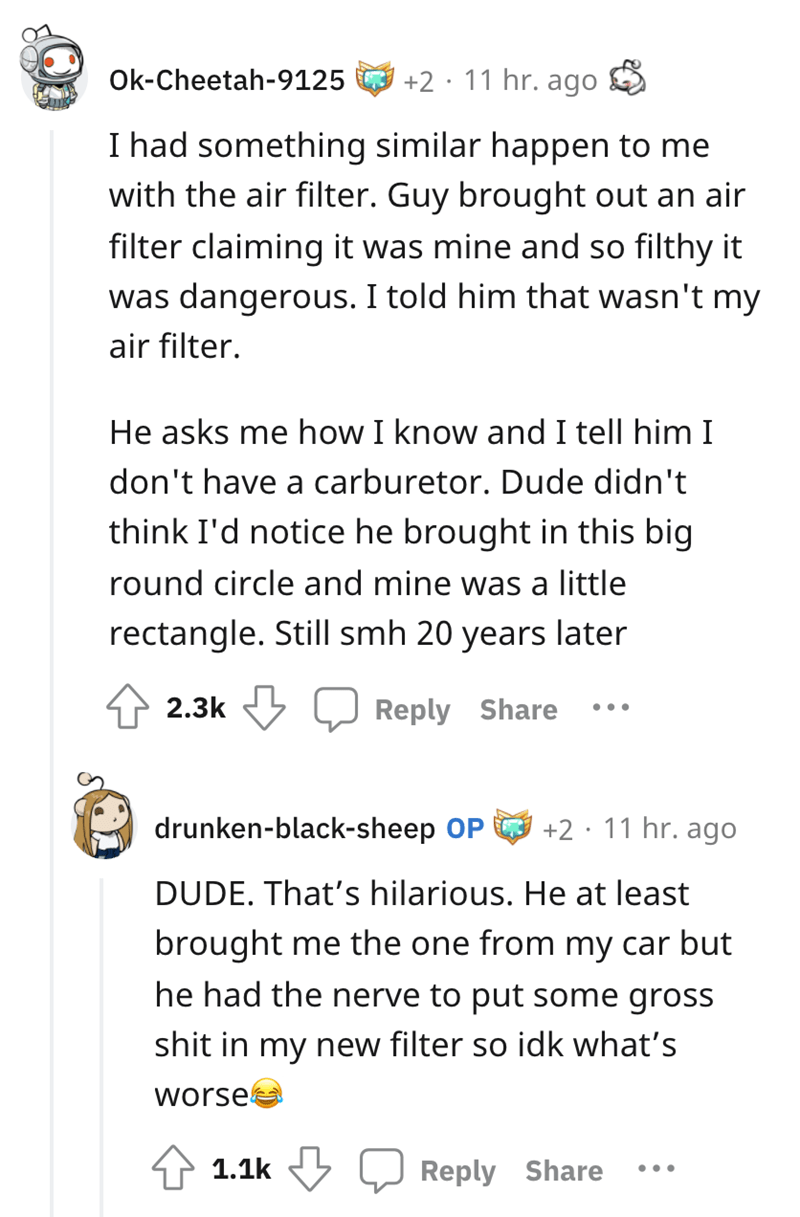 Also tell us about how we can be careful before handing out our cars to scammy mechanics. 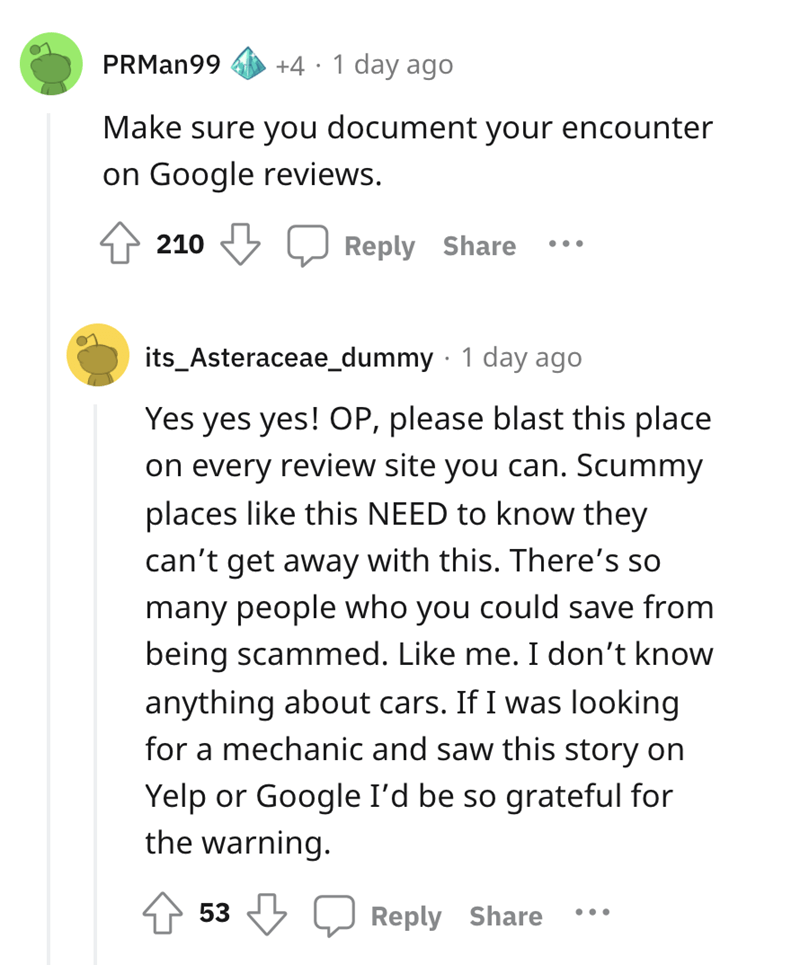 And with that we conclude this article. Let us know your thoughts on this story in the comment section down below.