Anyone who has had to participate in a video conference call has likely faced the question of whether or not to turn on their camera. Usually, it’s just a case of not wanting the CEO to see you in your stained shirt, but there are occasions when there’s a real reason you’re not quite ready for public display. This employee informed her boss that she might not be suitable for camera work and provided a plausible justification. They didn’t want to hear it, of course. As a result, the entire staff got a glimpse into her personal life. Surprisingly, the experience resulted in an entirely new work policy. So, hey, workplace culture isn’t as opaque as it appears.

In the following story, an employee is asked to turn the camera on no matter what, as she had returned from maternity leave, she had to use a breast pump several times a day. The employee got worried when she was asked to turn the camera on and even communicated it with the manager but he asked her to comply no matter what. She, being savage, did turn on the camera and it made everyone awkward, as it had to. In the later meetings, the boss learned his lesson and announced that everyone who is comfortable turning their camera on will turn their camera on only. OP got succeeded, at last. Let’s hear the story in her own words. 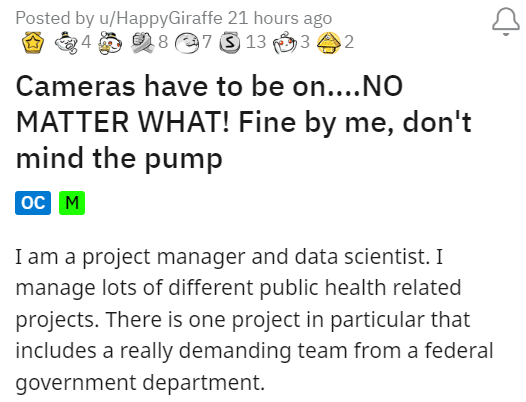 2. Being returned back from maternity leave, OP had to use a breast pump several times a day which she would use while working (writing emails and reports). 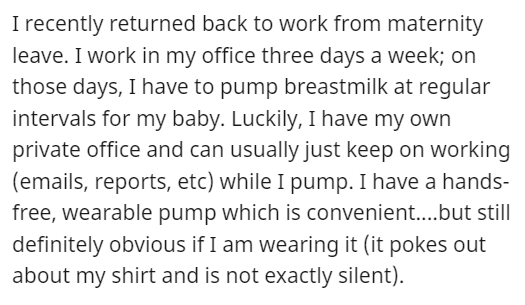 3. In a zoom meeting which OP was attending while using her breast pump which was obvious from her shirt, everyone was asked by the boss to turn the camera on no matter what.. 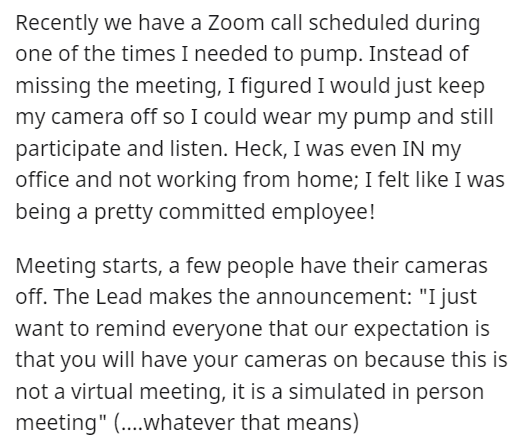 4. OP hurriedly sent a private message to her boss and told him the problem of not turning the camera on. did not get any reply and still was asked again to open camera. OP turned the camera on against 20 people and the rest of the meeting continued awkwardly. Many people asked her if she can turn it off as it’s comfortable but it now it was of no use. In the recent meeting, it was announced that anyone who is COMFORTABLE can turn their camera on. Slow claps; he learnt his lesson 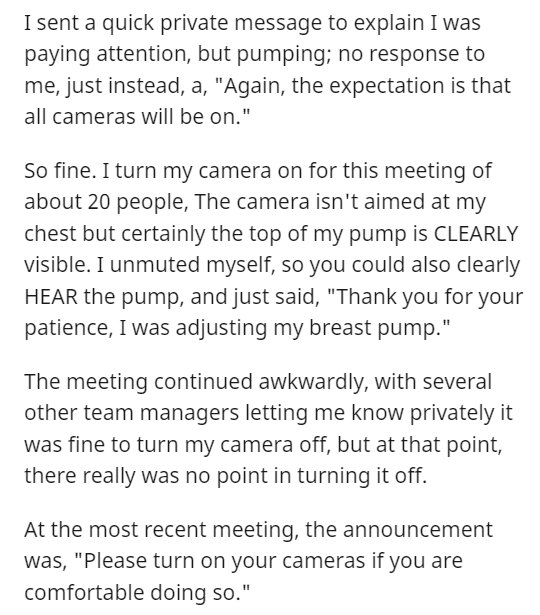 5. My head hurts trying to figure this out too

6. This is how the dynamics are in a workplace

7. She really did that for everyone; getting a whole new policy initiated, congratulations to her

Advertisement
Via HappyGiraffe
Well, what do you think of this story? I think a little space must be given to everyone considering their situation. This rude boss should not have been so rigid at first which might not have had him end up changing his own instruction. Well, it was good for everyone. Stay tuned for more fun articles.
Advertisement
You already voted!