Often the details that directors and actors spend the most time on, go unnoticed.

Creating a blockbuster process. Call it a rule or whatever but in Hollywood, you have to create a movie within 850 days. That is from the date it is announced to the public to the day of the first screening. When a movie is announced, it is only an idea, at times even the scripts are not even complete. A summarized script is created for hiring purposes. During the 870 days, a script is created, the scenes are shot and the majority of the time it takes in post-production where the film is edited into the masterpiece we see on the big screens. And this is definitely not a cheap industry. You guys must’ve seen Avengers: Endgame. It took approximately $370,000,000 to make that film, and it gave them a return just shy of $3 Billion, almost 10 fold.

In post-production, the teams work really hard to put in interesting references and sweet details. Some of these details take a lot of time to feed in, and a lot of hard work from the director’s and actor’s side. And at times these go unnoticed by the viewers and are later spotted as Easter Eggs in the movies. Kinda make you want to watch the movie all over again.

Today we will be looking at some of those details that we missed in the original screening. Internet users of the world took it upon themselves and found these details.

1. Here’s a crazy scene from Charlie and the Chocolate Factory. This squirrel that you see was not a CGI character. Instead they got an actual squirrels and the trainers spent 19 whole weeks to get the squirrel to sit on a  chair, peel nuts and put them one by one on the assembly line. 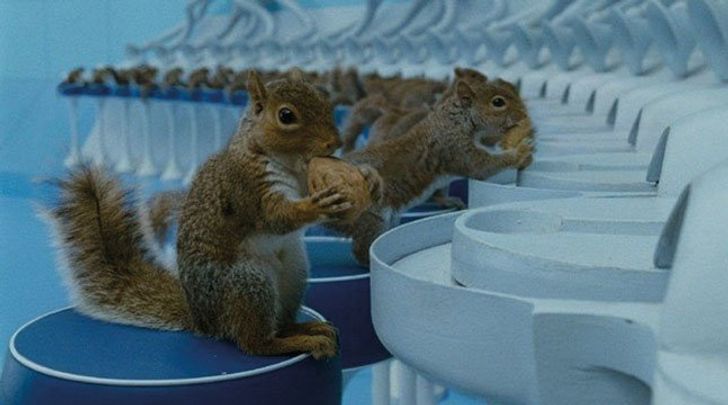 Wasn’t a famous movie for no reason, yo!

2. This scene is from the movie “Split”. James McAvoy hit a metal door in a scene in which his multiple personalities were talking to each other, he actually ended up breaking his hand. The swelling can be seen in one of the later scenes. He said nothing about the injury 3 days. 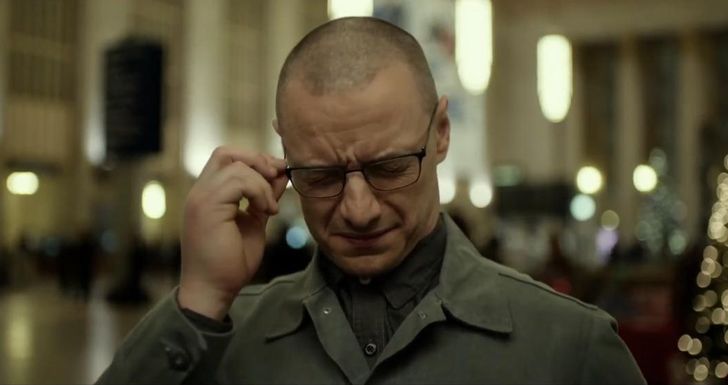 3. In this scene from the infamous Avengers: Endgame, the directors put fingerprints on Hulk’s glasses to provide a more realistic effect because the surface was shiny, in reality, the prints were bound to show. 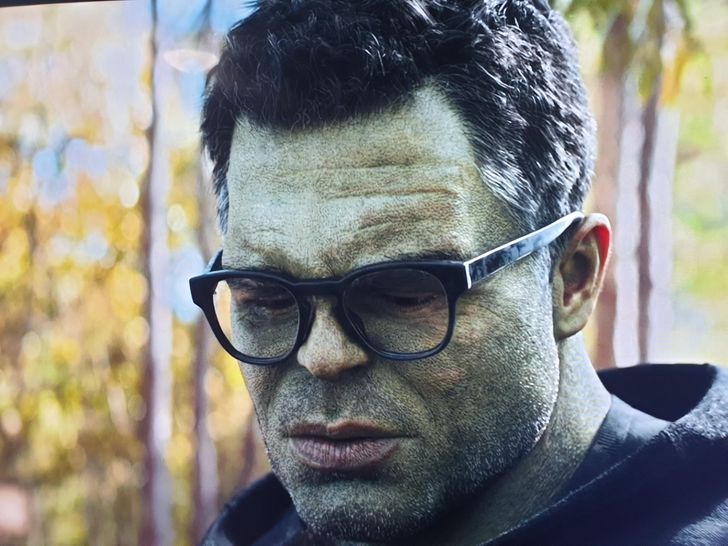 4. This scene is from Spider-Man. The bite mark Peter got from the spider bite in the first Spider-Man movie, was kept as a scar in the 3rd film, which was released 5 years later. 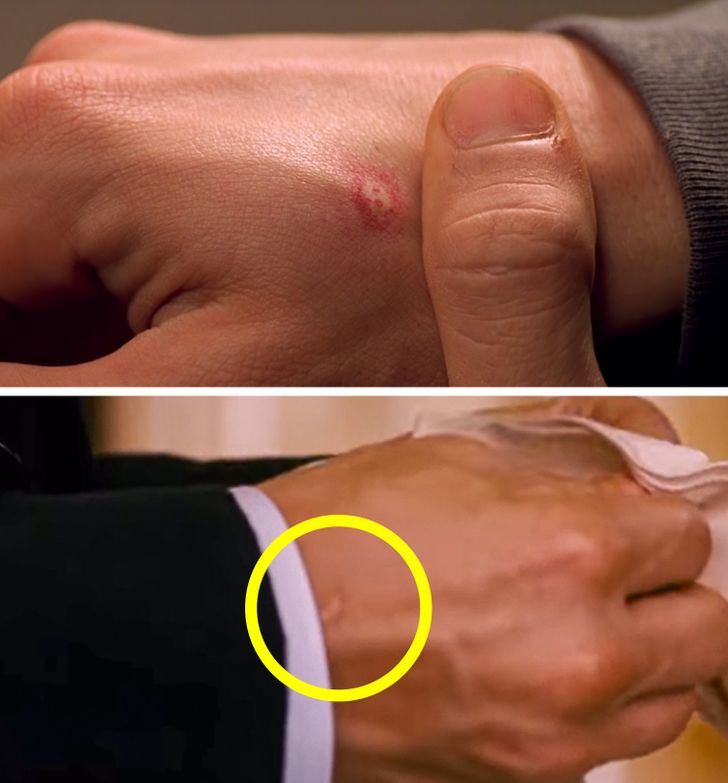 The attention to detail is so good. And the fact that they turned it into a scar instead of the same swollen bite, great effort. Subtle details are what make the movies shine brighter.

5. If you guys have time, and this is a good one, go rewatch Black Panther and fast forward to the 103rd minute. You will notice a jet flies over in the sky and it looks exactly like Black Panther’s mask. 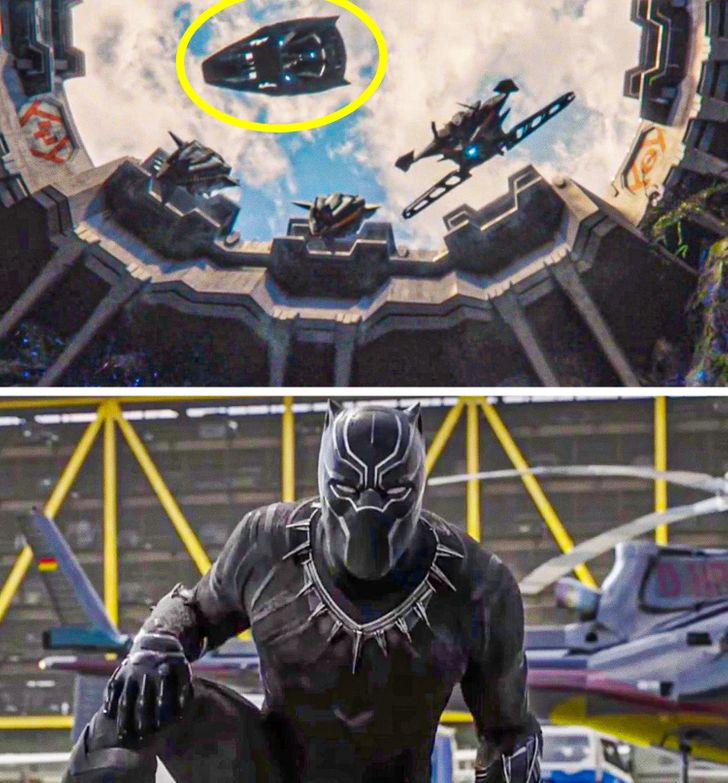 6. In the movie Aladdin, there is a scene in which the magic carpet is making a castle from the sand. That castle looks exactly like the famous Disney Palace that we all say at the start of every Disney movie. 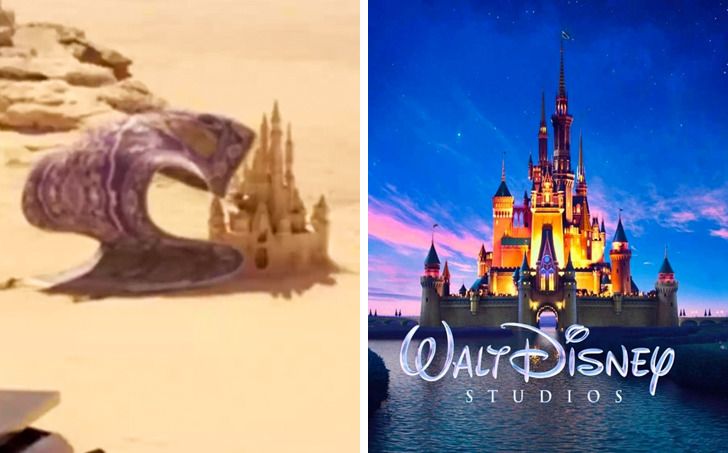 7. This night sky is from the movie Titanic. This is the view Rose looks up to after Jack dies in the ocean. Astrophysicist Neil deGrasse Tyson actually criticized James Cameron for getting the stars all wrong. He listened and changed the entire scene to make the sky look accurate in the 3D version that was released on 100 years anniversary of the ship. 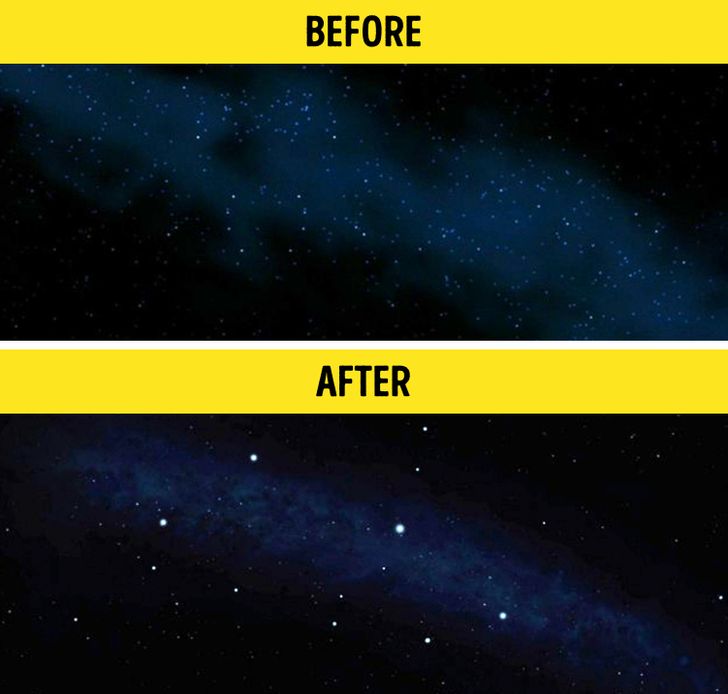 Wow! I am left speechless with these tiny details. The moviemakers really do put in all they have got to create these masterpieces that we see. And when the audience finally spots the details and shares the surprise on the internet, the directors surely see the reactions and that must satisfy them.

8. In this scene from the movie John Wick, we can notice a very minute yet effective detail. Wick wears his watch on the insight instead of outside in order to avoid being blinded by reflection. This technique is also used by military persons to quickly look at the time while holding the weapon, instead of turning their wrist around that would cause distraction and eat up time. 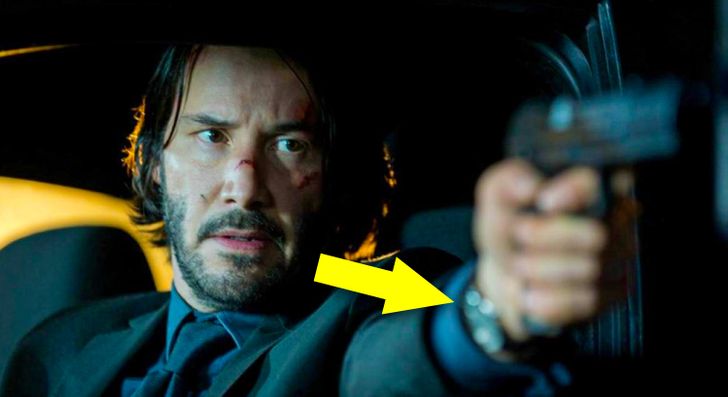 9. You can see Ellen Page’s character Ariadne, from the movie Inception, had tied her hair into a tight bun in the second level of the scene. This was done because they had a scene later in the movie in zero gravity and the CGI artists did not want to enter the hassle of working on the motion of her hair in that scene. 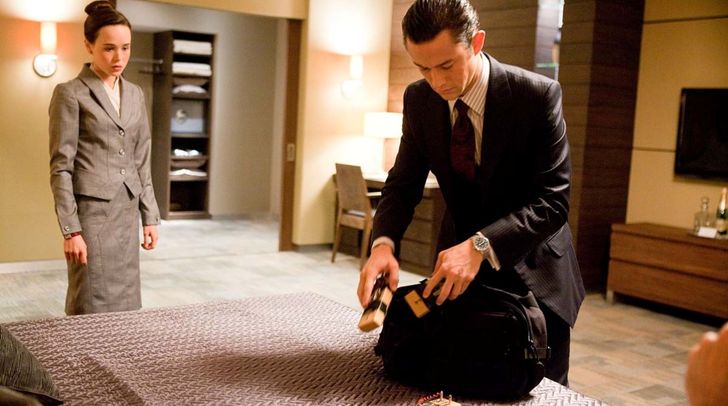 10. Here is another one from the first John Wick movie where Wick drives into an airport, the guard at the gate can be seen reading a book titled “Shibumi”. The main character in that book kills a man with just a pencil. This represents John Wick himself as he too killed three people with one pencil in the movie. 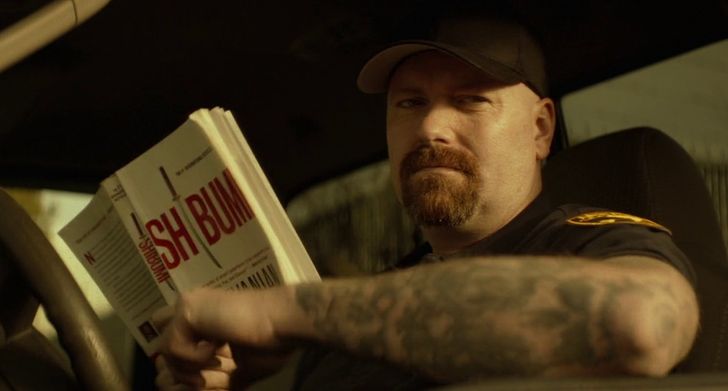 11. In this scene from Antman and the Wasp, you can see the world “Matrix” written at the back of the blackboard behind Laurence Fishburn who actually played Morpheus in The Matrix movies. 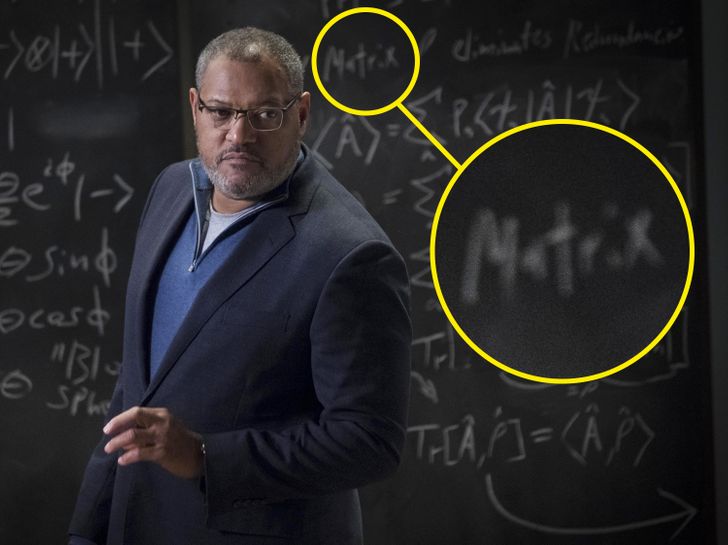 © Ant-Man and the Wasp / Marvel Studios

12. In Kingsman: The Golden Circle, this eyepatch scene was executed really well. While holding the puppy, Harry had no idea about the weapon until Eggsy started talking and he had to turn to spot the weapon with his “healthy” eye. 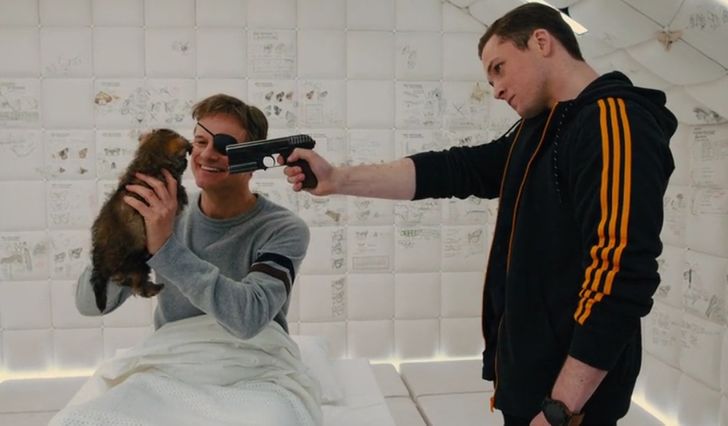 13. In the movie Brave, when Merida shoots the 3rd arrow in the archery competition, it actually leaves a tiny scar on her cheek. Attention to detail. 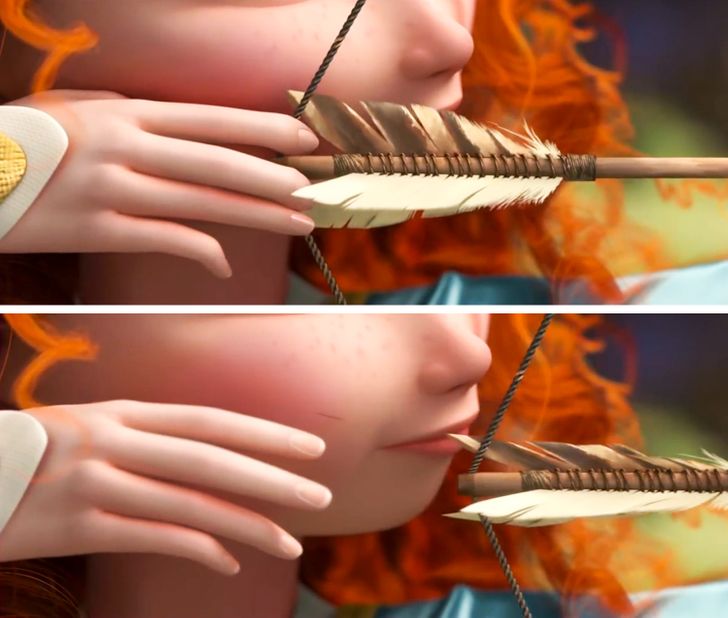 14. Here’s another scene from Charlie and the Chocolate Factory, you can notice that the tour boat only had 9 seats, 1 for Willy Winka himself and the other 8 for the guests. Which sort of implies that children that previously disappeared were planned executions rather than accidents. 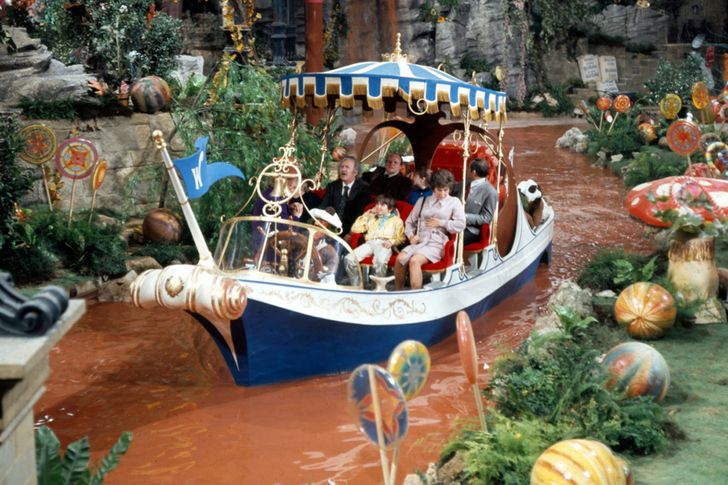 15. When Hela destroys all historical art in Thor Ragnarok, you can see one piece of debris with a crack on Thor’s eye. That scene foreshadows Thor losing his eye later in that movie as he dueled with Hela. 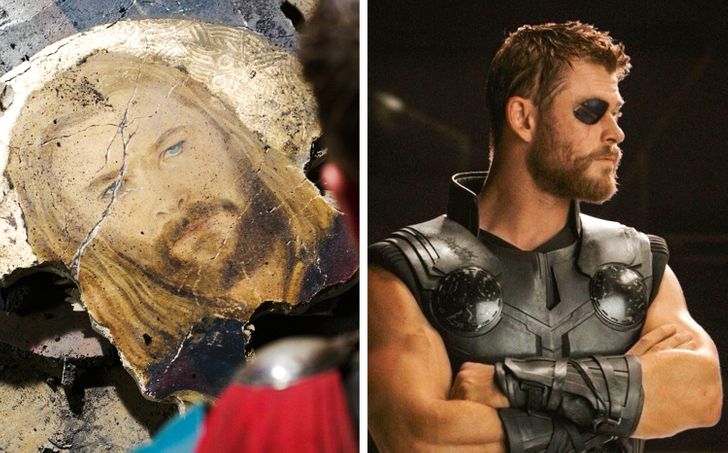 I really hope you guys enjoyed it. Don’t forget to share your thoughts in the comments section down below. Did you guys manage to catch any of these details in the original screening?