Parents can make or break you.

From what I have seen for the short time I have been on this Earth. Many people have several mental health issues because of their parents. It is an endless cycle where parents act this way because their parents were sh*tty, and it never ends until someone finally gets help and learns to be a better person. And I know we would all like to forget the things many of you faced during your childhood, but it is good to let it all out and try to move on rather than being stuck there.

After all it isn’t about forgiving that person, so they would feel less guilty. It is about forgiving them, so you can finally put it behind you and move on. But what do I know? I am not a therapist even though many people on the Internet talk like they have spent years studying psychology. However, we do have some stories that people have shared about their childhood that are quite sad to say the least.

You can take a look at all of them by scrolling below.

Leaving someone with serious mental health issues alone with their thoughts sounds like a great idea to me. 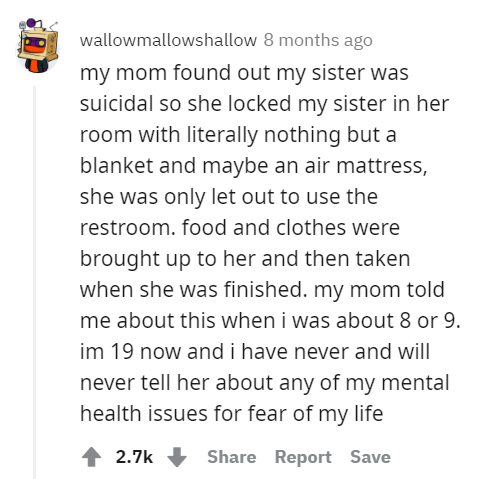 I am not surprised to see that your mother turned out this way when her parents are not that better no matter which way you look at it. 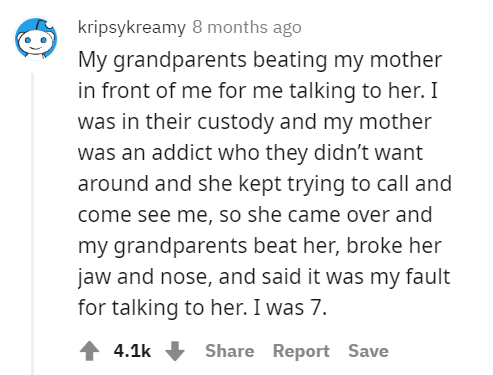 When I was 14 during an entrance interview to a high school I didn’t want to go to with the headmistress and my dad by my side, I told the honest truth to the headmistress. I didn’t want to go there, though it was a lovely school, I just wasn’t up for it as politely as I could. It’snot like it was a secret, she could pretty much see the misery on my face. I had valid reasons that I gave to my parents several times before, but my dad is hella strict so still made me apply to that school.

We got home and my dad was furious. He took my phone and the door to my room. I went to bed early and in the middle of the night, he came to my room, told me to get up and draw the curtains. I only had underwear and a t shirt on. As I got up he used a long mwiko (basically wooden cooking stick) of around 16 inches to whack the shit out of me. I screamed in pain, but this guy didn’t care he hit me everywhere, bruises and scars like I had never seen until the stick broke, and he took off his slipper and continued to hit me for like 10-15 minutes saying how he felt disrespected and who I thought I was acting like that.

I never saw him the same way again. Not only that, but I still shudder a little when I hear his voice and when he touches me, even for a hug, and I’m 19.

Furthermore, I ended up going to a different school, meeting my parents half way, not perfect, but definitely much better. –vizualdesperada

Surprisingly enough, a lot of parents do this and think of it as a joke later on and laugh about it like it didn’t ruin their child’s memory. 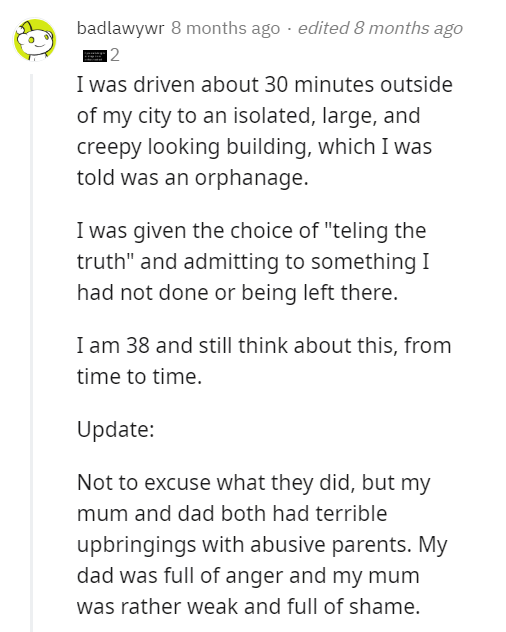 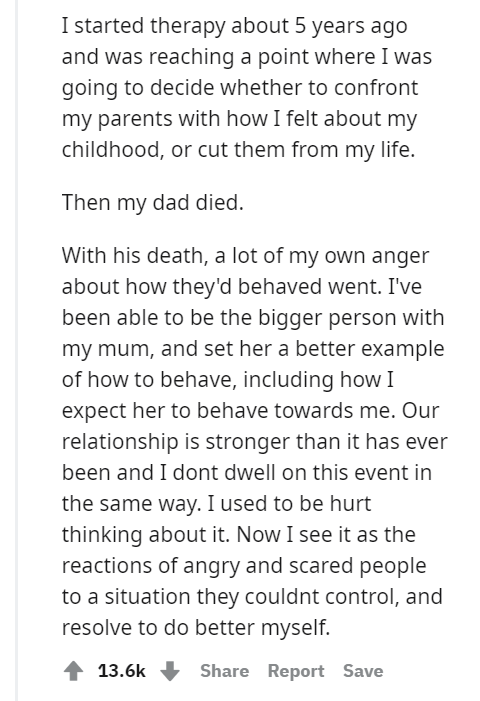 Parents making a huge deal out of something that doesn’t even make sense? Check. 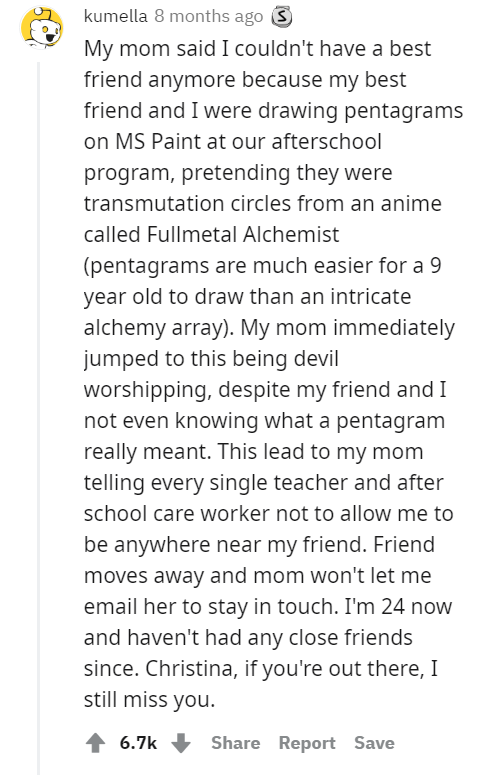 Some people sure do like waking someone up in the middle of the night to berate them about stuff. 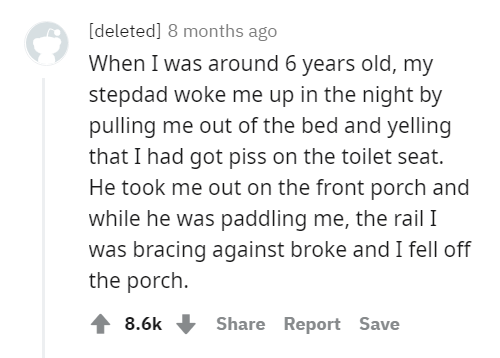 This is gaslighting at it’s finest. And lots of parents employ this tactic. 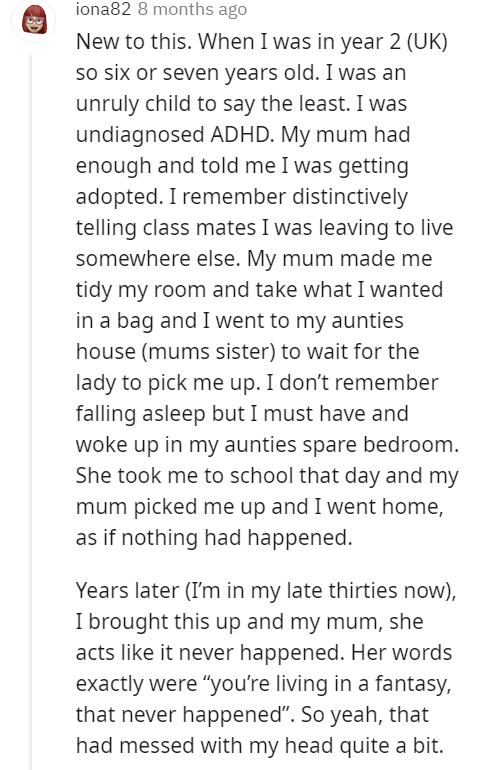 I can’t even imagine that. Most people would go crazy. 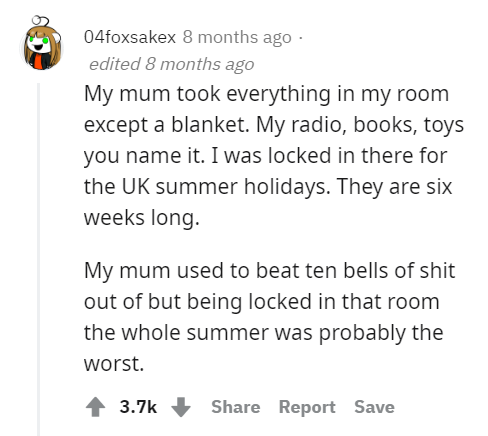 I honestly don’t understand what this punishment accomplished. 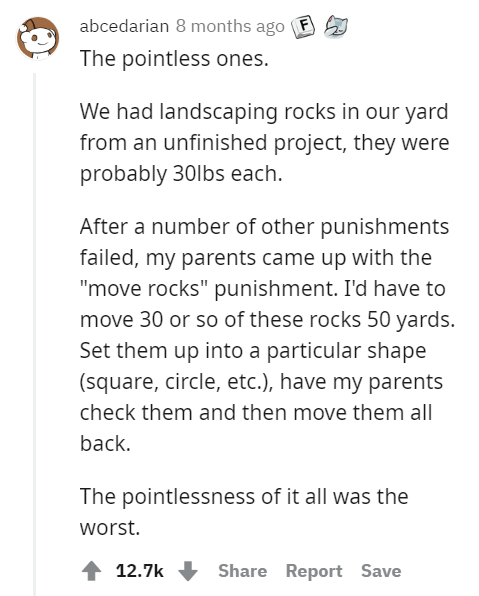 This isn’t a punishment, this is straight up a**use, and you can’t convince me otherwise. 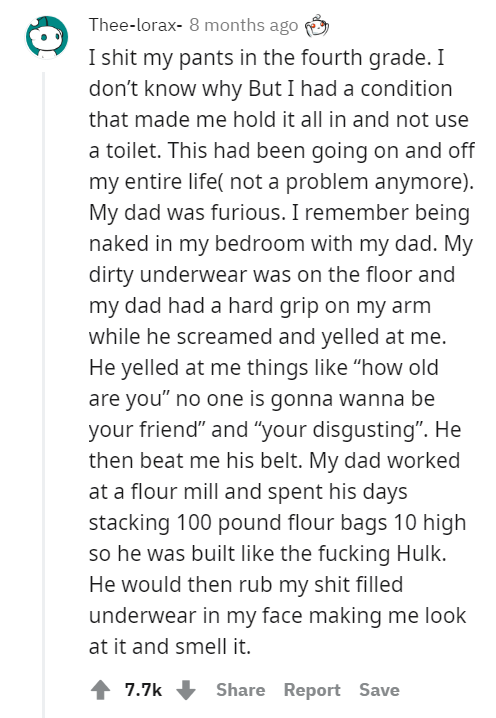 I am honestly at a loss for words after reading through so many stories. 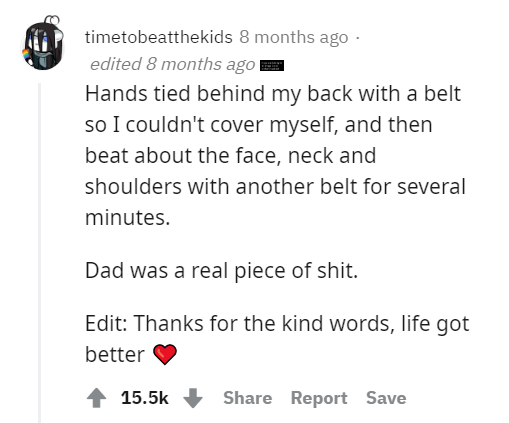 My step-brother punched me in the face and gave me a bloody lip. My step-mother decided as a punishment she would hit us both with a belt. I don’t know why I was in trouble for getting punched, but she held onto the end of the belt with the holes and swung the belt buckle at us.

It hit the back of my right hand and I still feel the pain in the back of my hand when I squeeze something with it. I got punished for getting punched in the face… I still don’t understand what I did wrong 23 years later. –prestoneric

The part that hurts the most is that your parent is the one doing this to you. The person you are supposed to trust with your life. 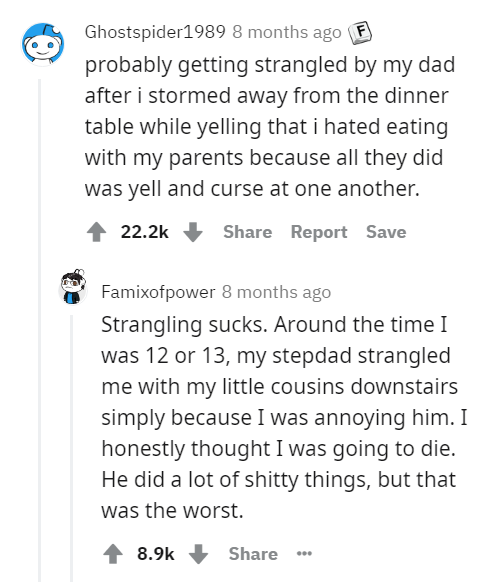 At least the kid is doing well now, and I am glad he at least has one sane parent in his life. 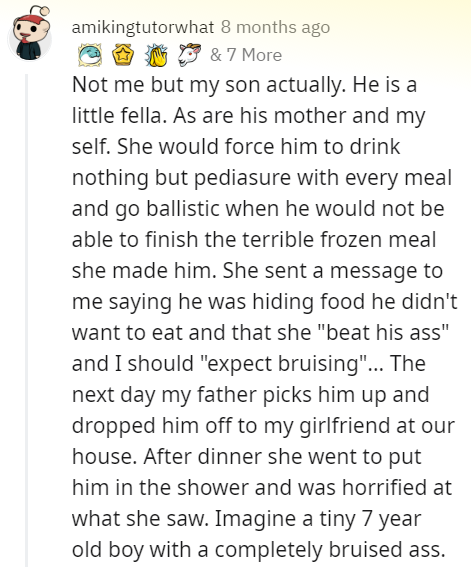 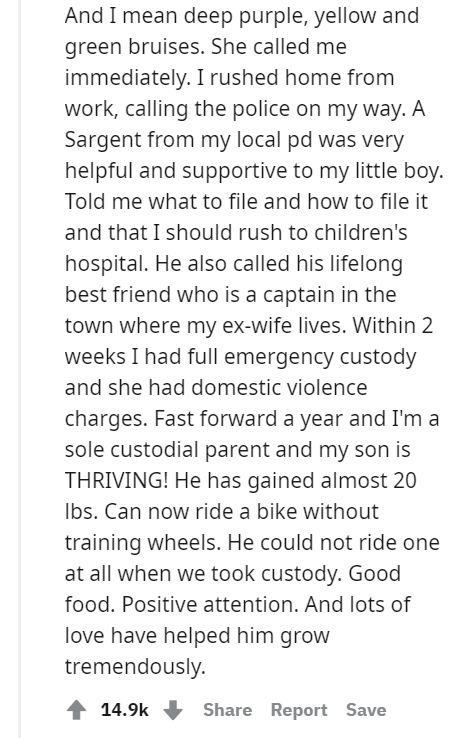 Do you want to share similar stories that you went through as a child? If so why not comment them down below and let us know. It always feels better to talk about this sort of stuff.