It is very normal to work with crazy people in the corporate world.

You just have to deal with it, put all grudges aside even though they are from their side, and show professionalism as much as possible. These crazy coworkers often and all of sudden make it a matter of ego and automatically assume you are claiming superiority over them because perhaps you are a better performer. And that is when they start reinforcing negative behavior. You just wish whenever you enter the corporate world, you never meet people who wish to harm you in any way possible. No, we are not claiming there is no good left in the world, but the negative side does exist. You have to deal with the dirty ones and that’s what the social order is.

But perhaps things went too far for this Reddit user when they were legit reported at the office for eating a sexy potato. Now that is the kind of shit that makes you question whether you want to do a job at a workplace or not. These Karens are ruining the decorum.

Scroll down below to read the story.

1. That is a header and a half, I am really curious about what really happened here.

I would be fuming if it is exactly what it sounds like.

2. Fair enough, as long it is a delicious experience it doesn’t matter how you eat the potato. 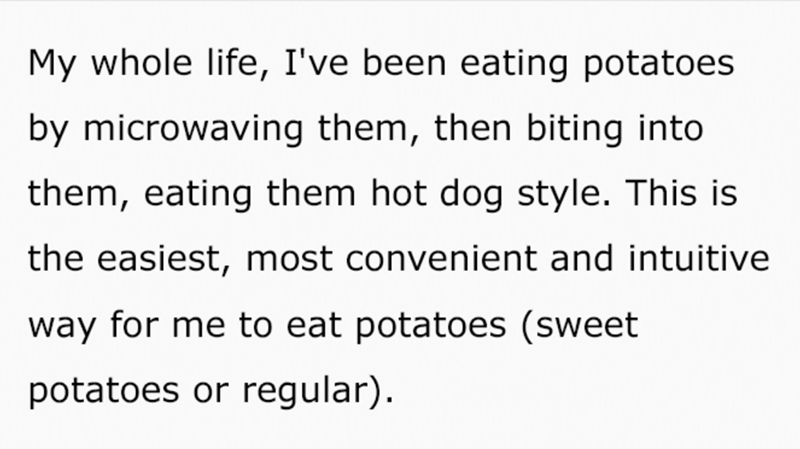 To be honest, a really nice idea. I will try it this way.

3. Fair, it’s how she was taught to eat potatoes by her family. You can’t really do much about it when cultures are involved. 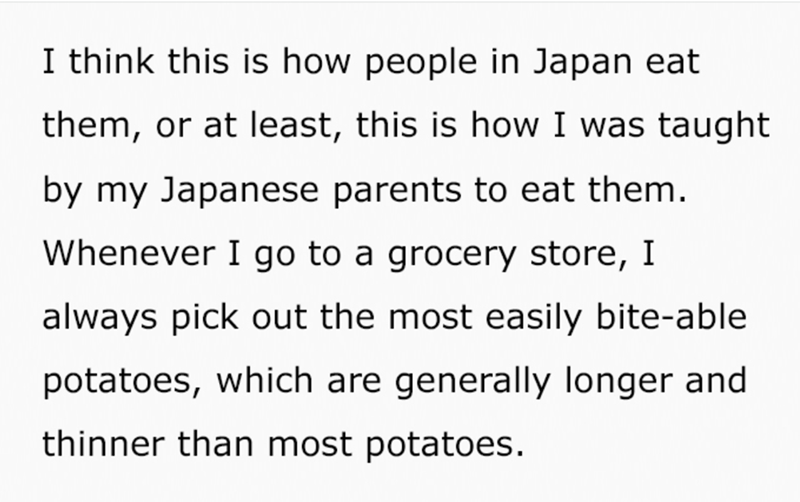 Her potato picking game must be really strong.

4. She probably has a lot of time on her hands to have a problem with the way you eat potatoes. 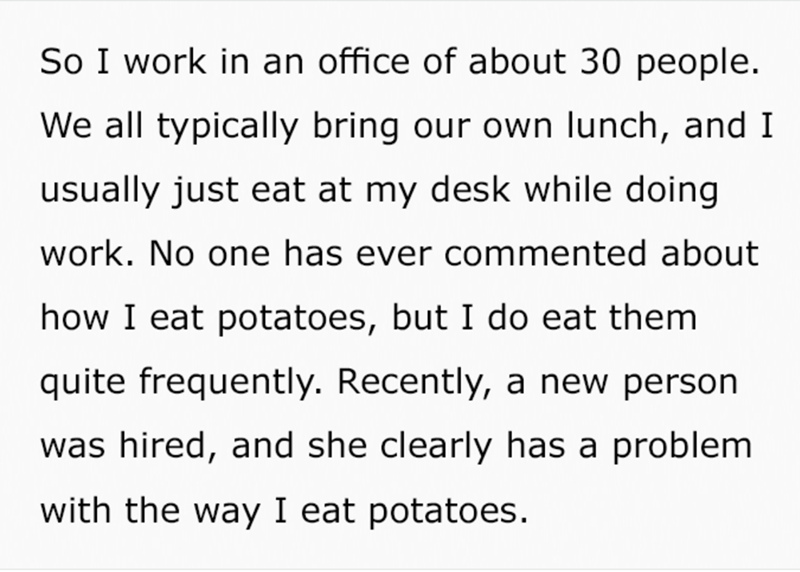 This is hilarious. A newly hired person, just mind your own business dude.

5. Exactly, I have never seen someone showing off the way they eat a thing. 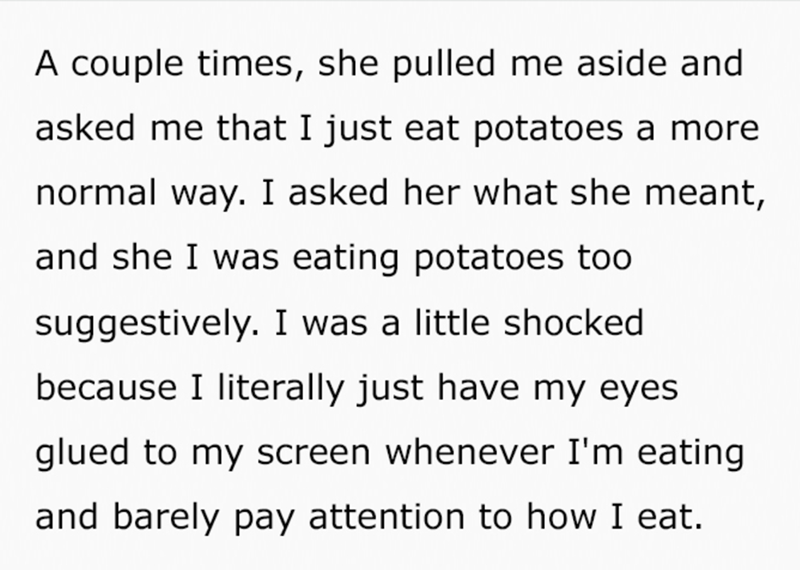 When you want to become a hot topic, you often do such things.

6. Of course everyone would be confused. Why would a newby come in and start criticizing how their coworkers eat? Dumb. 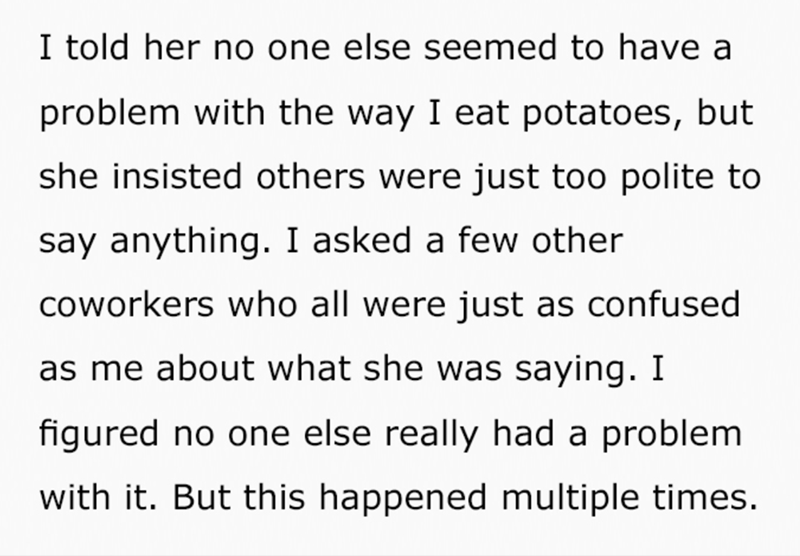 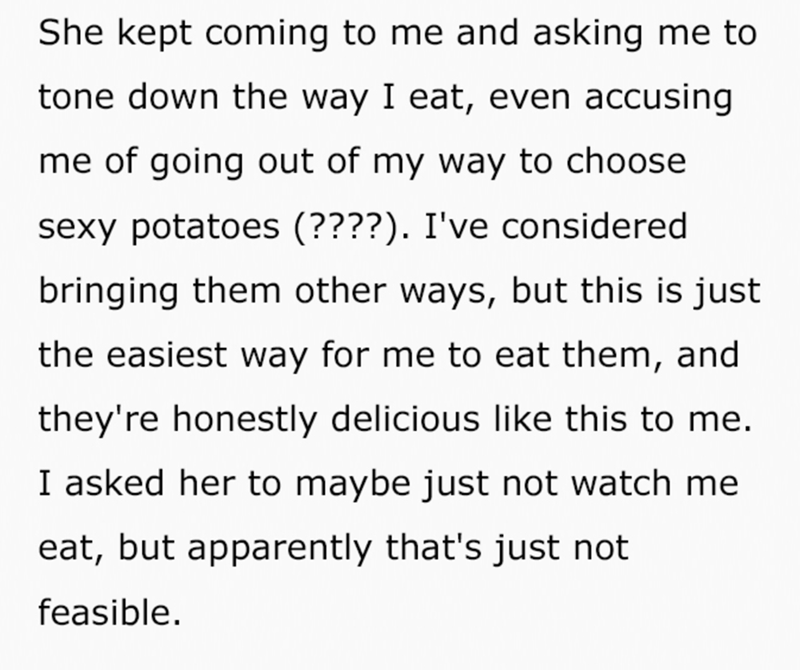 Calling a potato sexy and asking someone to tone it down while they are eating. You can fully sense her exhibiting pure Karen qualities. They better watch out.

8. I literally cannot believe what I just read. Reported for eating a potato at the office.

I am so fone with this entitled culture.

No! The heck? You were definitely not the asshole. It is your potato, your life, heck you earned that job. No one should ever care how you eat or whatever you do. Why are they so concerned with you, it is hard to understand. I hope we get more insight on the story and how the meeting went because if you loss this job for eating a potato the way you were taught by yourmother, I will lose all hope in the corporate sector. This is an issue.

So let me say it loud and clear, OP you are not an asshole for eating the potato the way you want. It is your life, you respect the methods taught by your parents, hence you are an adult and of a sound mind, you should not be told how to eat your potatoes.

Let’s see what happened next.

9. They posted an update and you will not like it. She was reported for sexual harassment…what the? 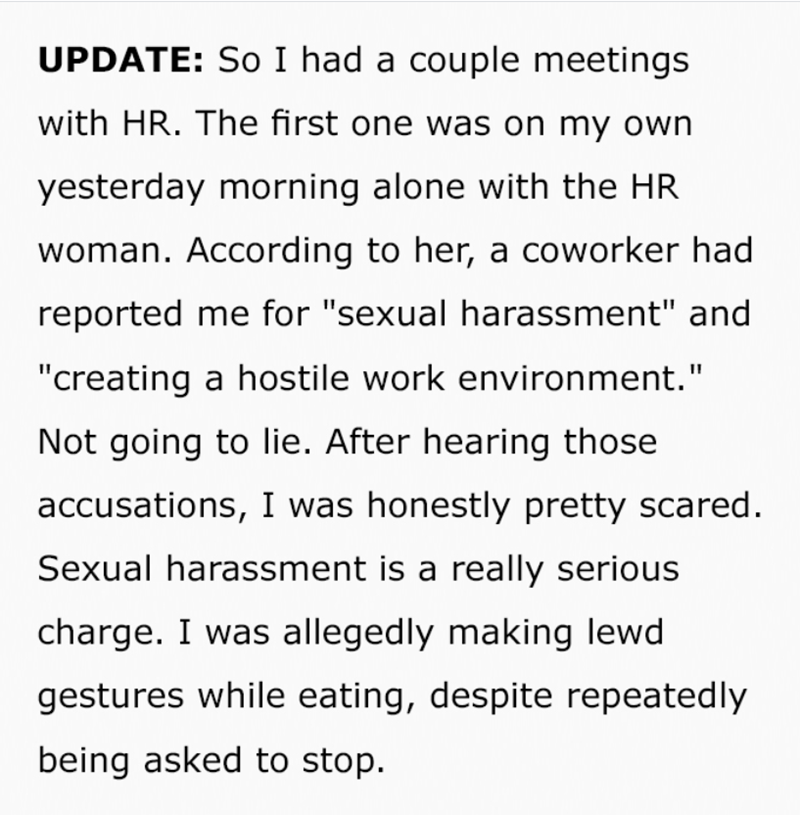 From finding their way of eating a potato wrong to alleging them of sexual harrament? I am starting to believe Karen has a potato fetish.

10. They decided to lay down all the facts of the story for the HR woman to decide for herself who is in the right and who is in the wrong. 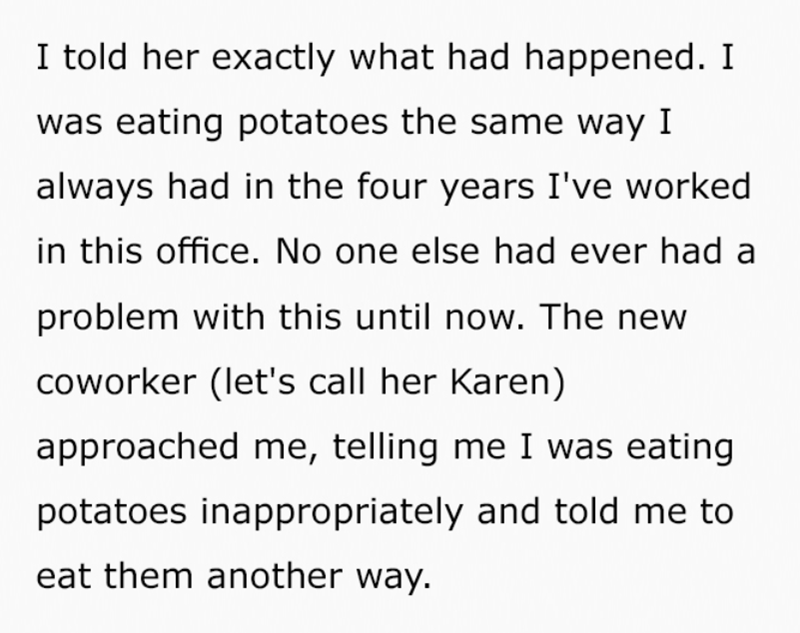 11. It’s how she was taught to eat by her Japense parent. Yet, the Karen kept ramming on about it for no reason. 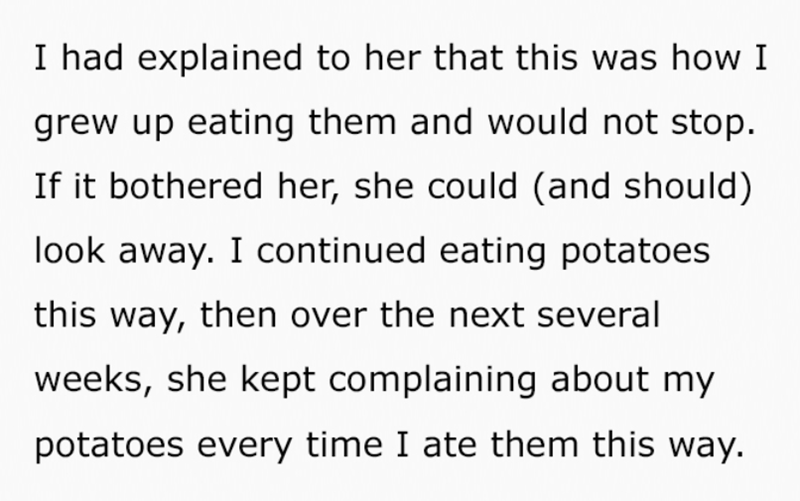 You do not have the authority make other people change the way they eat, you weirdo.

12. The HR dug deep to get to the end of the matter because this side of the story seemed really opposite to what the charge was. 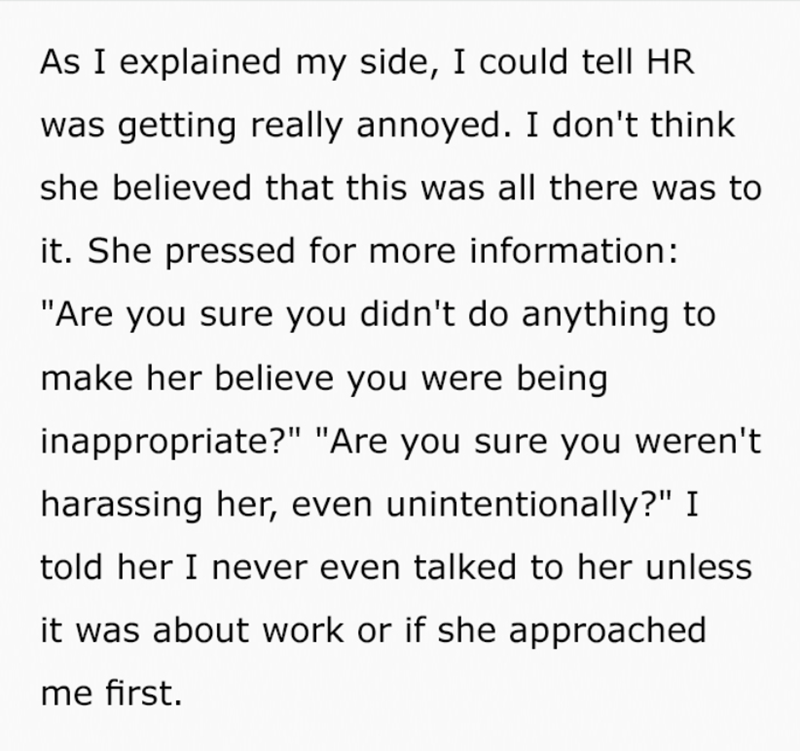 I mean, she just landed the job. How could she have already faced an inappropriate behavior while non of the other employees did.

13. The three met face to face to come to a resolution. 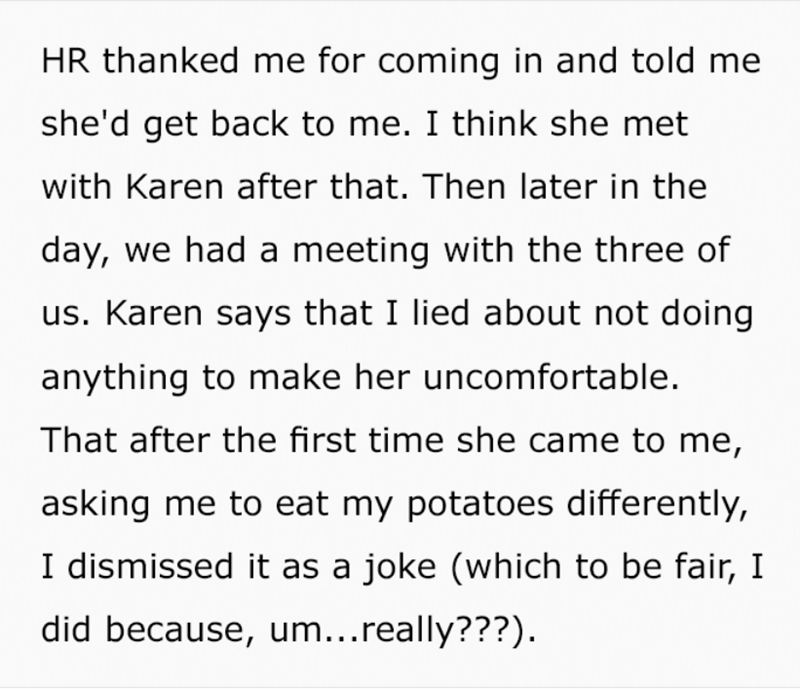 This is so dumb, they had to do a whole committee session to resolve a matter so little. It’s just a potato dude, leave it alone.

14. Is this woman hearing what she is saying? Where is her reboot button because she is fully malfunctioning. 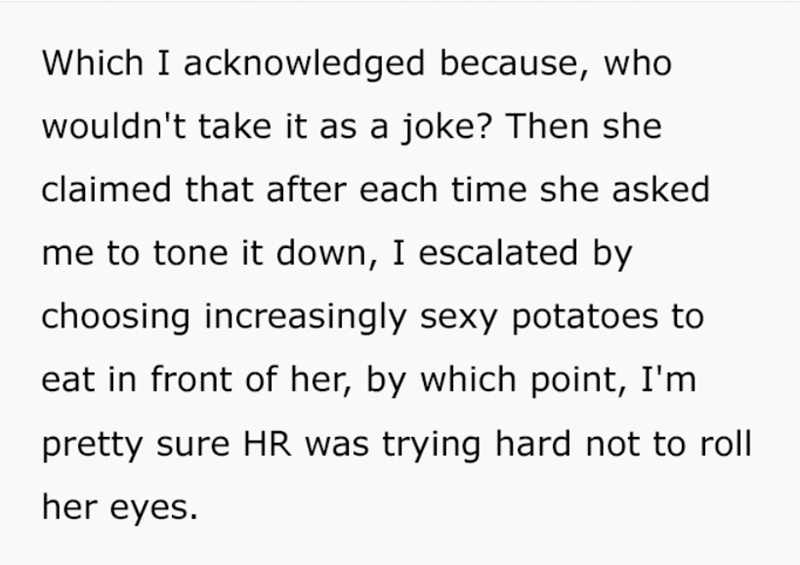 15. I am surprised. Why does she feel the need to explain her position. She is eating, Karen is watching. Karen stops watching. Problem solved. 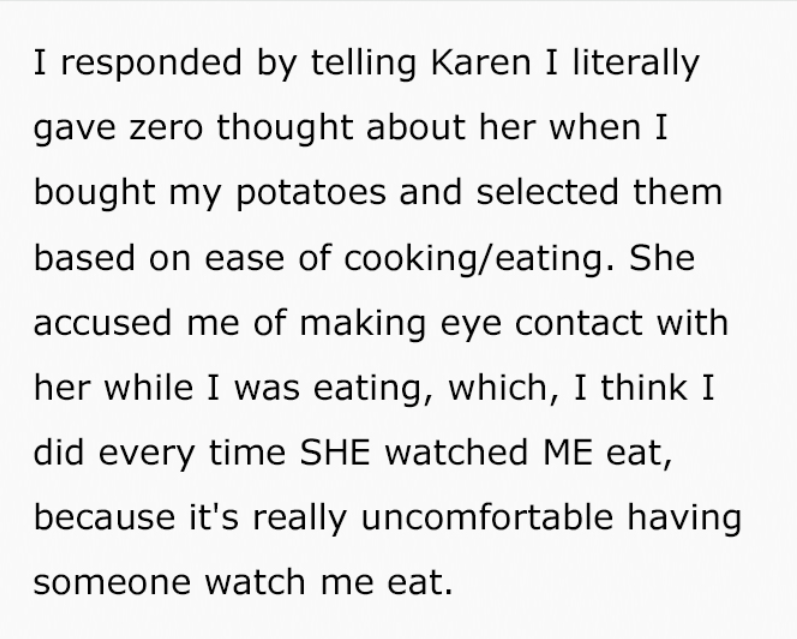 16. You know your case is done when the HR manager laughs at you…bye bye Karen. 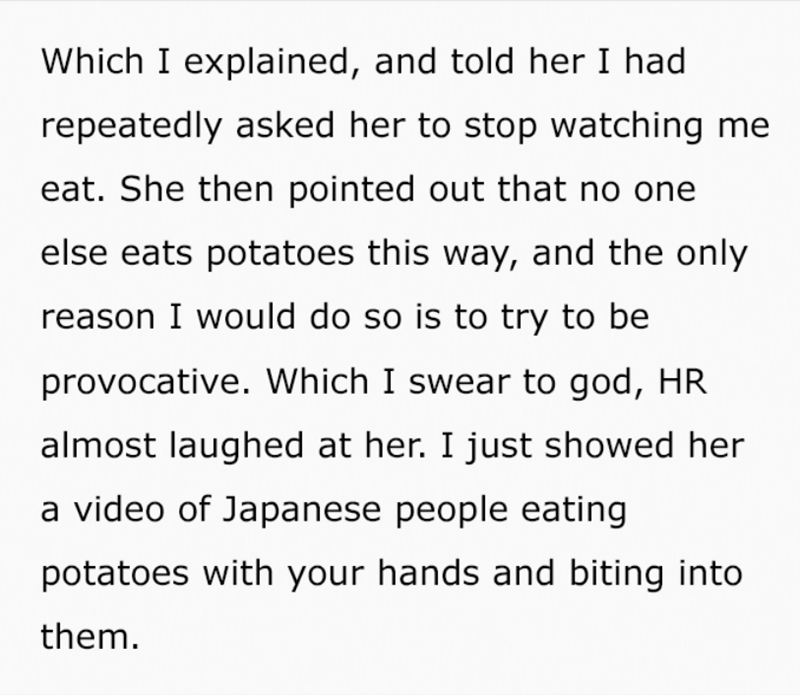 Karen was shown prove that such a technique of eating potatoes exists.

17. Karen got told, justice has been served. 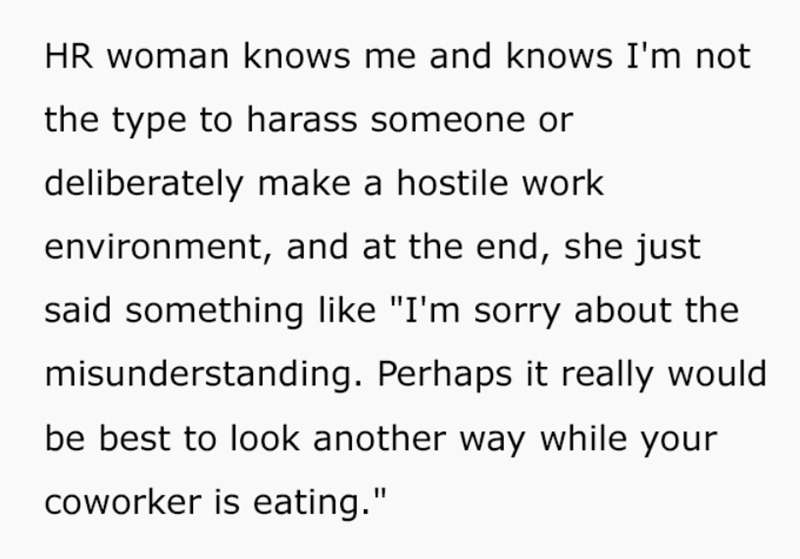 18. Yes, she will continue eating the sexy potato the way she had always.

I am a happy man. 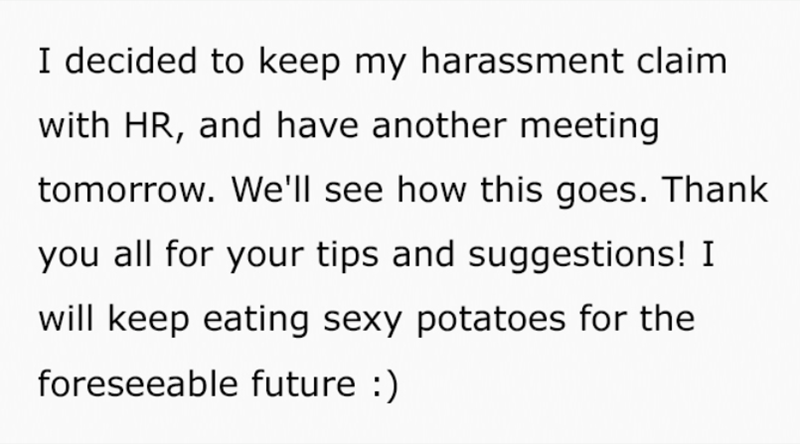 Extremely surprised that Karen did not resort to curse words and abuses when the case went against her. I mean, that’s what they all do. This is so pathetic. Yes, you are allowed freedom of speech and have all the liberty to form opinions which are to be respected. But exploiting that power, using it against someone for absolutely no reason (no I do not count ego as a reason to ruin someone else’s career), is wrong and you cannot tell me otherwise.

What is your take on this? What do you think about this entitled behavior? Share your thoughts in the comments section down below.