Every animal has its own unique DNA that is determined through the genetic makeup of that animal. The unique DNA sequence is what makes up genetics in animals and this gives them their distinctive physical appearance. These could be factors like eye color, fur color, and other physical traits. The way animals appear on the surface is determined by their genes, just the same way as it is for humans! You must have heard people saying that you resemble either one of your parents or both. For animals too, the case is very similar.

There are always those rare times that genes decide to play around with us a little. We might be expecting the usual cat with two ears or a dog with one tail, or one eye color, but sometimes nature has other plans! These animals may at times come into the world with a different set of features altogether. If you want to see what we mean, keep scrolling to view the marvel of genetics and how they can really end up taking us by surprise. Whatever way animals are born into the world, we can’t deny that they’re all extremely adorable and lovable no matter what physical traits they may possess!

1. That extra tiny paw though!

2. This kitty’s proud of her extra beans!

Those curled ears are truly unique

5. Can’t really look away from those eyes

7. This rescue’s right at home with her new owner

9. Nothing better than extra toes on those paws

“Adopted another older, shy girl from the shelter. When we met her, she looked sad, wasn’t food motivated and poor girl still needs some dental work done.”

11. Just want to give this baby a cuddle

12. Perfection in every way

“This is one of the oldest breeds in the world and is recovering from near-extinction – in 1963, only 6 remained. Now there are 1600. They are naturally polydactyl, can close their ears to water, and bend their heads back 180 degrees.”

13. Got all the ladies swooning

What a unique kitty

16. This ginger kitty loves to play!

“We rescued him and his calico sister from under a neighbour’s deck when they were ~2.5 weeks old. We had to bottle feed them at first, and now they’re eating machines. And super playful and healthy!”

17. This doggo has two mouths

“Toad is about 6 years old, she found her way to the shelter that I worked at several years ago. The whole staff was kind of in shock at her appearance. She was also highly aggressive when she came in. A shelter officer muzzled her and carried her to the vet clinic and while she was there being examined, it sounds goofy but literally, we made eye contact and she immediately relaxed.

That day I took her into my office to evaluate her and she immediately crawled into my lap. This big scary, insane-looking dog, just climbed into my lap and rested her head on my shoulder. I adopted her and we have been inseparable ever since.”

Polydactylism is one of the most common deformities we see in this list. This is a condition where animals are born with extra toes on their paws. It’s interesting to note that this anomaly is commonly found in cats situated on the North American East Coast.  According to history, cats with polydactylism are popular on ships. There is some disagreement over the origination of the genetic defect but it definitely ended up spreading in cats aboard ships leaving from Boston.

On these ships, sailors held in high regard some of the skills possessed by polydactyl cats such as climbing and hunting especially when it came to getting rid of rats on these ships. It was also believed that these cats were brought and were mixed up in many superstitions, and later witchcraft (as legend has it).

21. These extra paws won’t stop this baby from playing

22. Got that philosopher’s look

23. This kitty’s got opposable thumbs!

24. This Siamese kitten is waving at me!

This kitty has our heart

25. Displaying that paw loud and proud

26. This one should be named coffee beans

27. This ones got that intense stare

Looks- wise beyond her years

30. The kitten with mittens 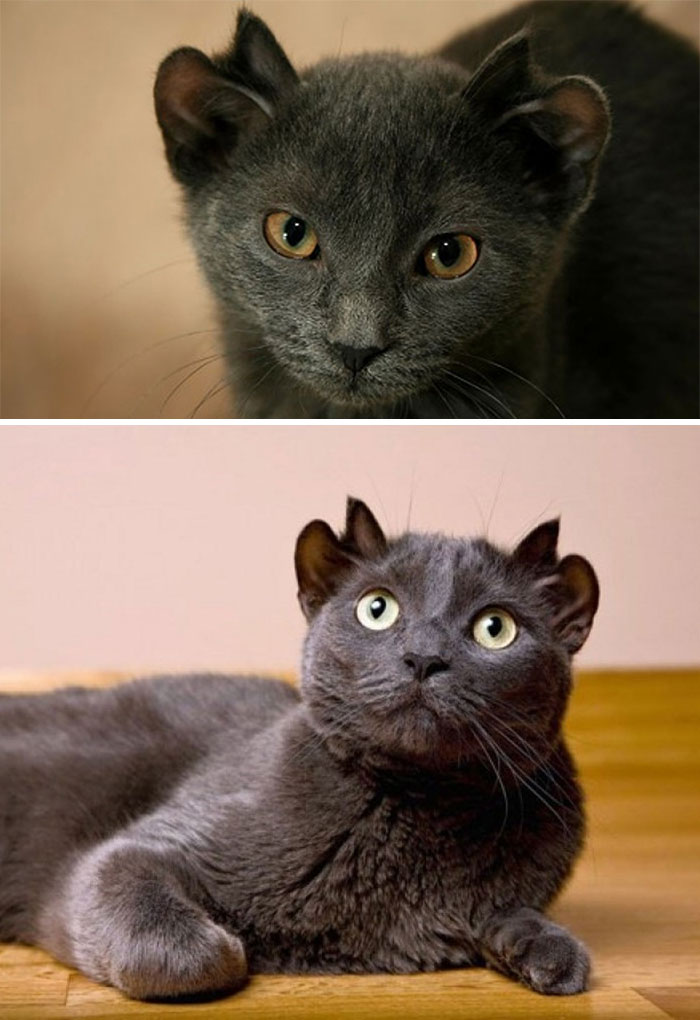 35. This vampire cat’s got extra fangs

36. Stretching out those paws

Another interesting fact about polydactyl cats as we end this interesting article: Ernest Hemingway, the well-known author loved polydactyl cats as well! He was gifted one of these rare cats by a ship captain, and Hemingway named it Snow White. When Hemingway died, his former home in Florida became a museum and functioned as a home for his cats, and descendants of those as well. Due to his immense love for these cats, they are often referred to as ‘Hemingway cats’.

The cats in all these pictures are indeed extremely special, lovable, and unique all in their own ways. They have certain physical anomalies and these definitely set them apart from the average pet. Whatever the case, every single one of these animals is worthy of being loved and cared for, and to be taken into a happy home. Let us know in the comments section below what you thought and which animal was your favorite!