No pain is beyond love.

It is very true. An unrelated example but I had a dream of being a doctor. But, I ended up failing the entry test exam twice. I was depressed, broken, and very hurt. And I kept blaming myself for it. But my parents replied with nothing but love. They were very patient with it. It was an emotional process, but eventually love is what healed me. It made me forget all the pain. And today, look at me. The degree I am in, I absolutely love it and on top of that, I am on a scholarship which, in a way, allows me to return to my parents for all they have done for me.

So love is king. And coming back to today’s main discussions, animals. It breaks my heart to know that there are animals out there who have to live all their lives on the streets. It is very dangerous, especially at night, for little pups and kittens because the question of survival comes into account as well. It is very devastating how people just abandon their animals. Do they have any idea what that poor animal has to go through? They go without food for days, they incur life-taking diseases, and their personality starts to become more and more rigid. Who is responsible? Well, not those who go out of their way to rescue these animals and give them the life they deserve. I don’t call them rescuers, I call them angels.

While some animals are lucky enough to catch the eye of random locals and get rescued. And they end up adopting those animals as well. While the others have to wait to be rescued by shelter facilities who then take proper care of the animal, nurture them with lots and lots of love to bring them back to a happy life, and ready for adoption to live with their forever happy family.

Today I’ve got 23 pictures of animals healing just through the power of love. Scroll down below to enjoy!

1. “She used to be a skinny kitten with crust on her eyes. 6 months later, she’s happy, healthy, and ready for her forever home.” 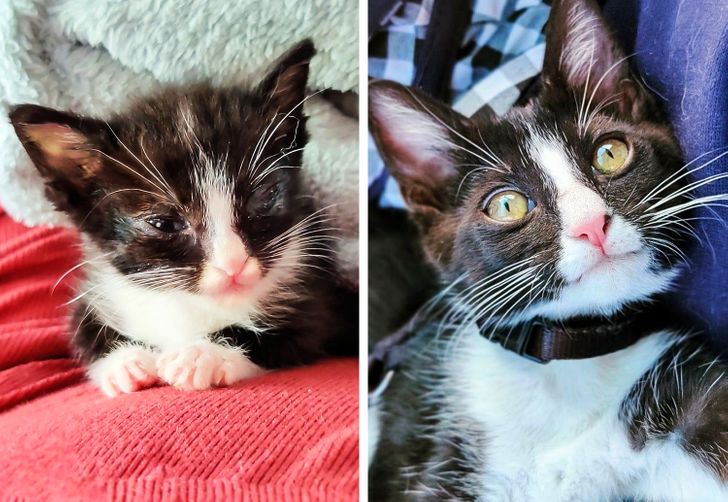 2. Journey from distrust to trust. All through the power of love. 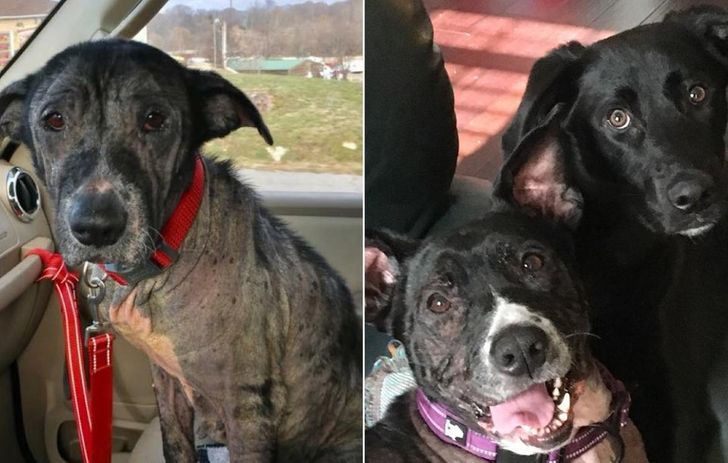 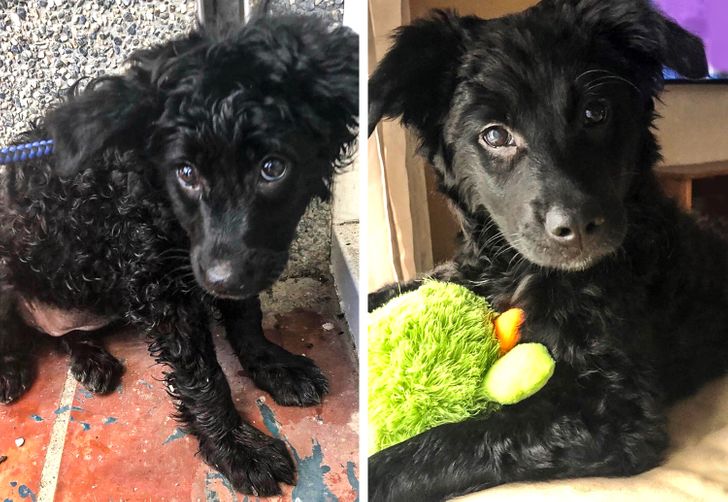 4. “Top left is the ride home from the shelter, the rest are after the first 3 months in his forever home.” 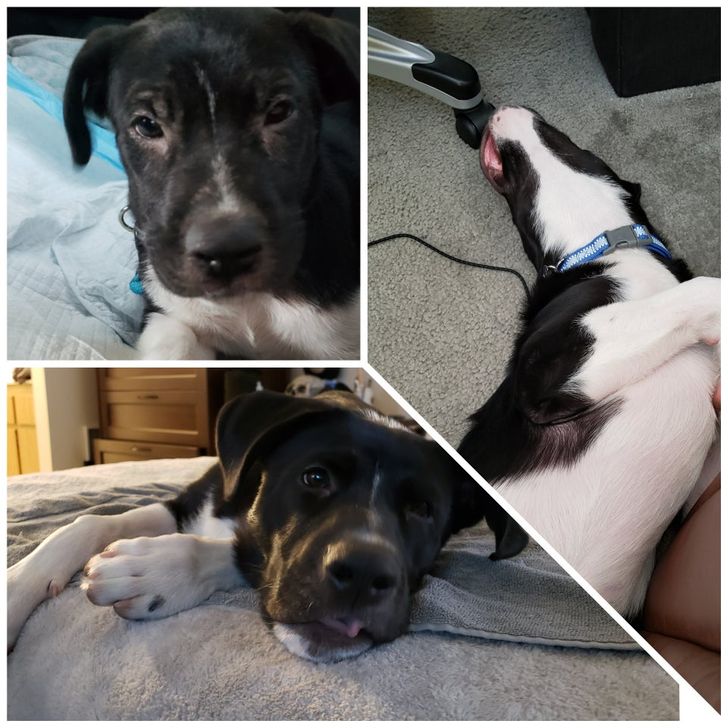 5. From living in a Walmart parking lot to living the best life ever. 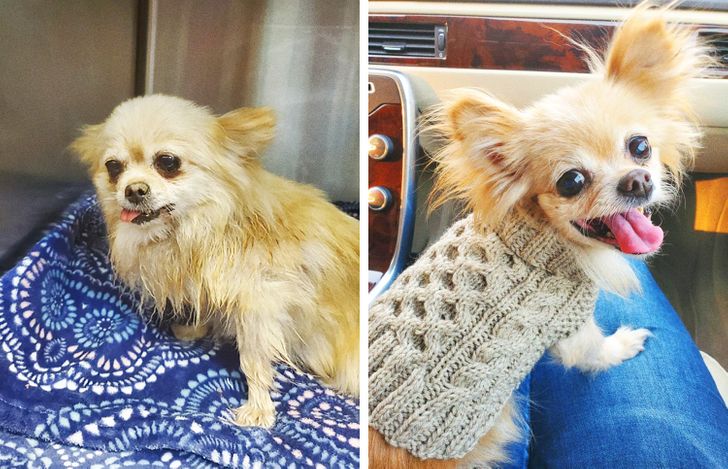 6. “After about a year and a half of showing up on our porch, Snowball has improved immeasurably. She’s my perfect angel.” 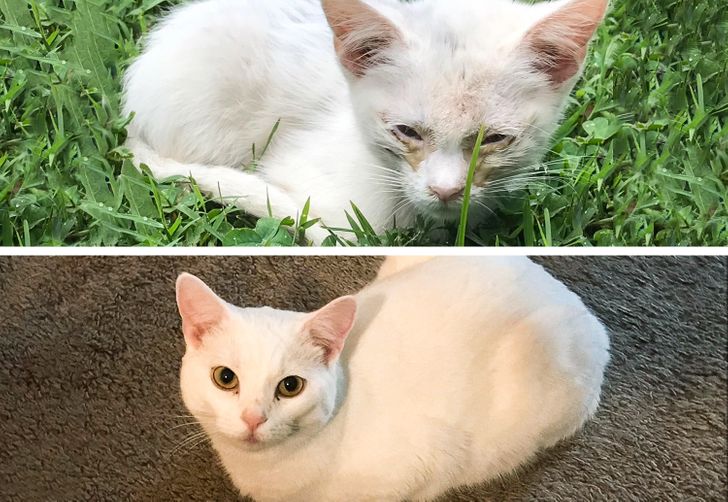 7. “My Bojack at the shelter vs after we found each other.” 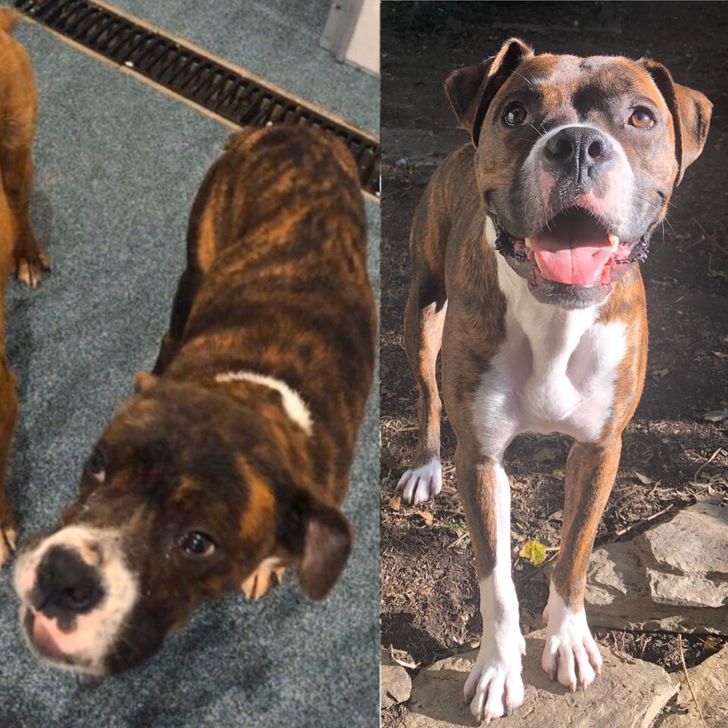 8. Patience, care, and unending love will always result in happiness and a joyful life. 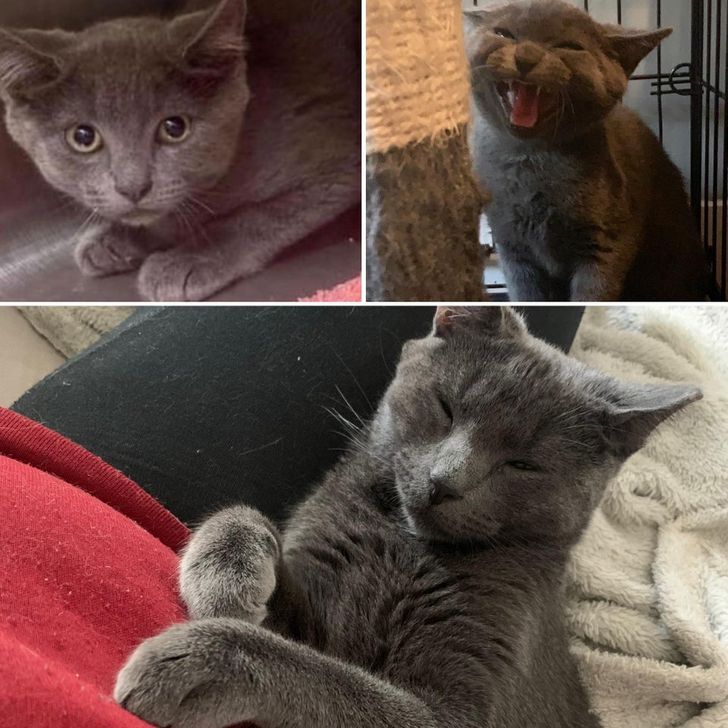 9. Before and after her adoption. What a difference love can make. 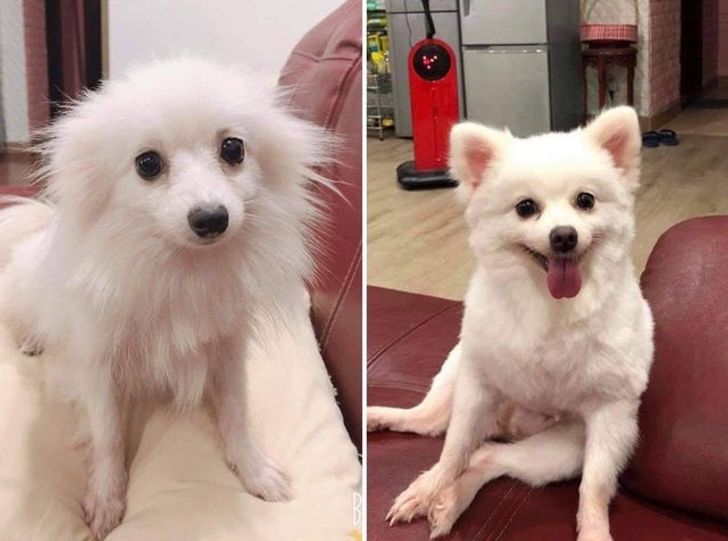 10. “From a little baby with a respiratory infection and who was full of worms, to the biggest sweetheart…” 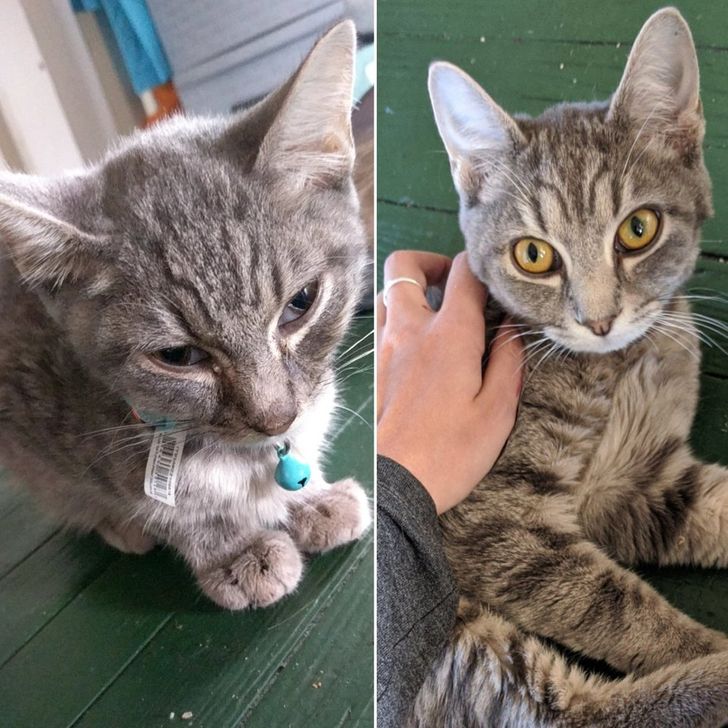 11. A transformation solely made through love and care. 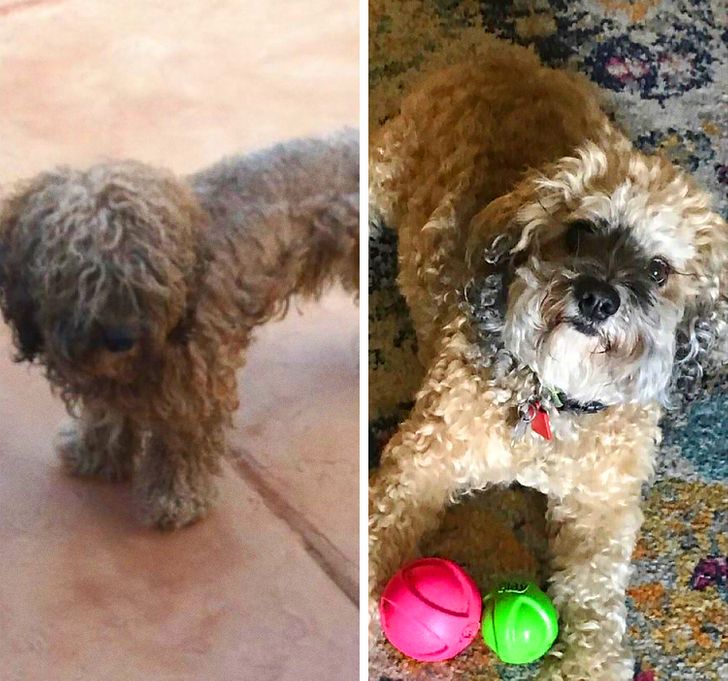 Breaks my heart to see how these poor animals were abandoned. I can’t seem to register how does this happen. It’s like you have lost all hope and are about to give up, but then at the exact moment you see a hand and all you gotta do is muster up the energy to grab it, and that is the case for all these adorable animals..

Scroll down below to see some more magic of love.

12. Just under half a year of adoption, and look at how much more healthy the cat looks. Just need the right people. 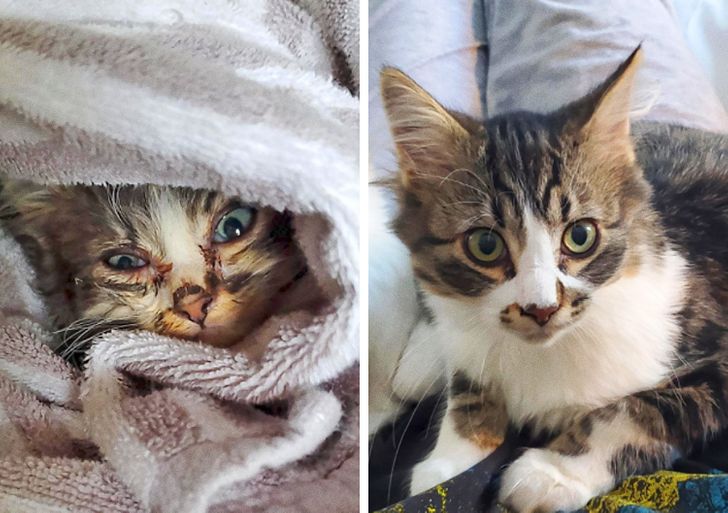 13. A scooby snack of love, and he is all joyous! Such an adorable doggo. 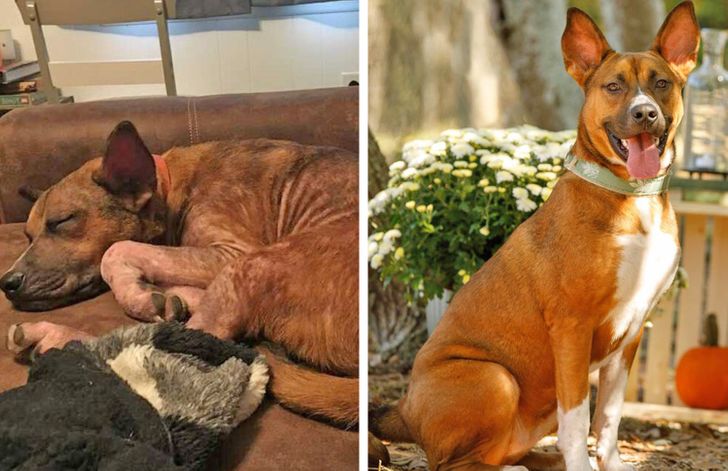 14. “Jake was found underneath a car, half-frozen and alone. This is him one year after his rescue.” 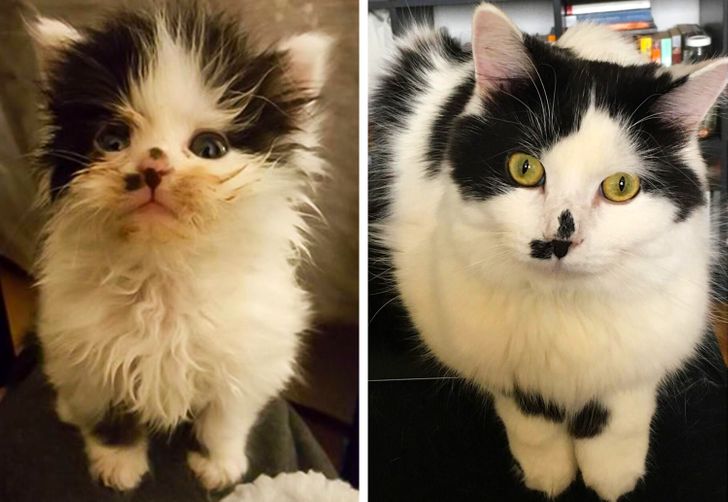 15. “My foster kitty the day I picked her up and a week later” 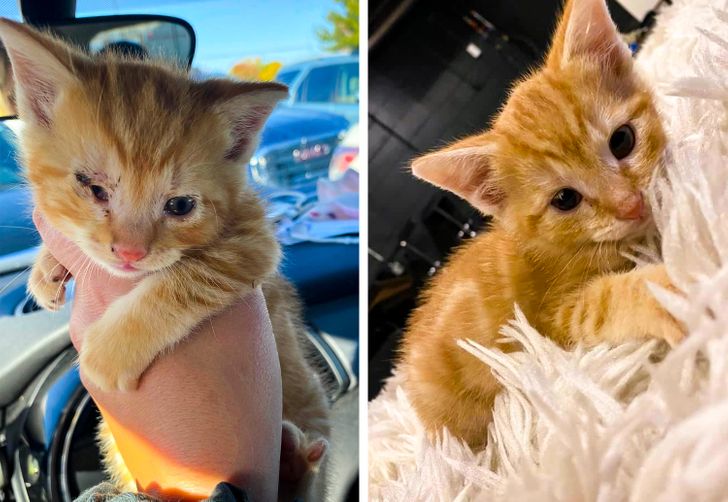 16. She got rescued by a local vet and I am so glad it happened. 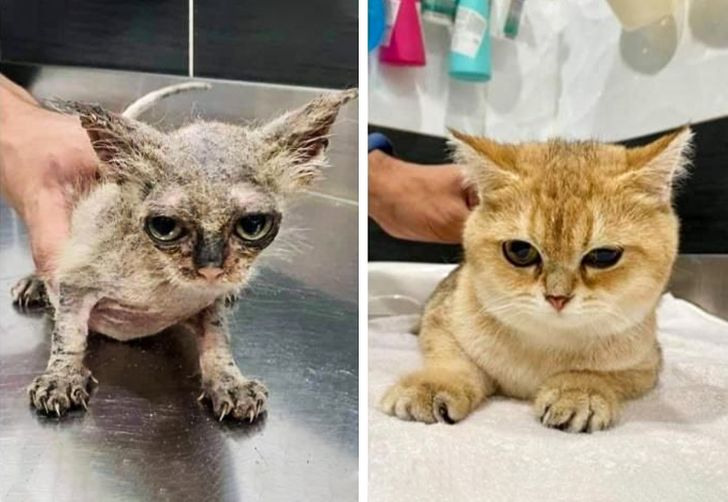 17. From Lucky Lab Rescue to a forever home. She’s had one hell of a journey. 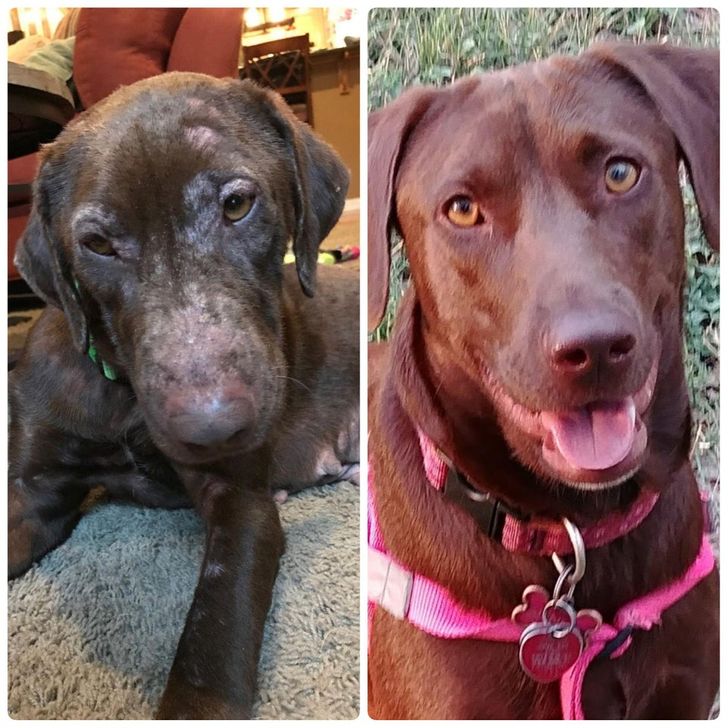 18. She was abandoned by her mother. This is the same cat just 6 months apart. A little pinch of love and you can see the results for yourself. 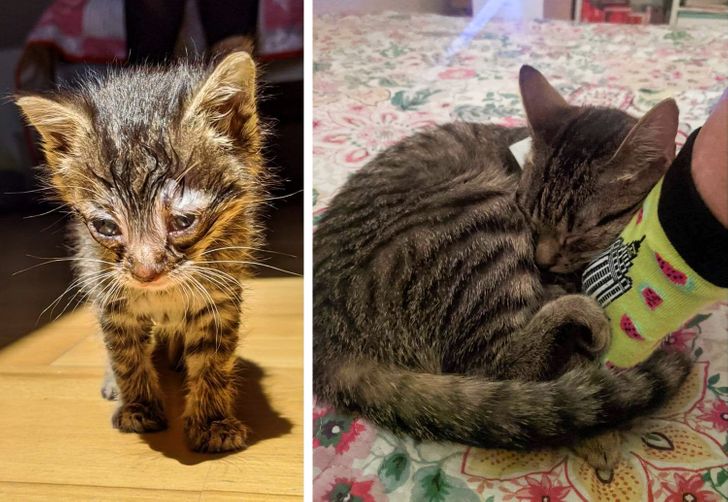 19. “On the left is Otis first arriving at the shelter and on the right is Otis adopted, clean, and being a good boy at home.” 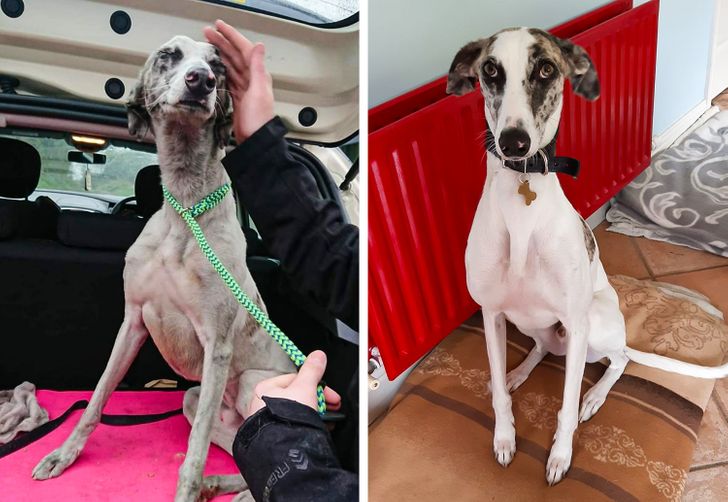 20. She was adopted as a malnourished cat from the middle of nowhere. 5 years later, she is totally unrecognizable. 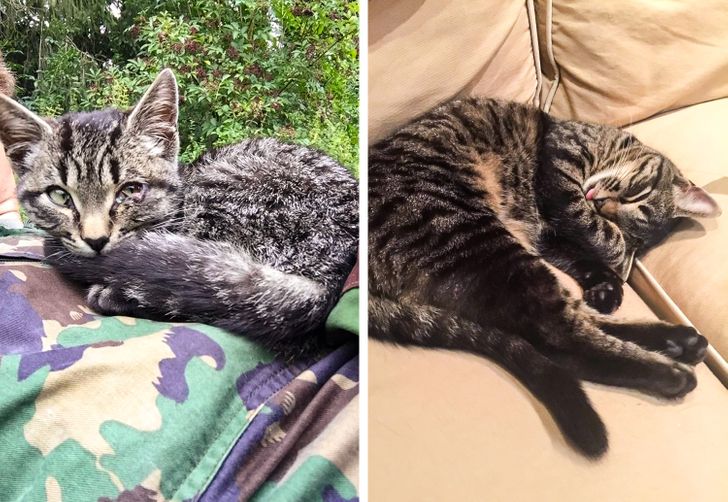 21. “From terrified car engine kitty to the floof master and the key to my heart.” 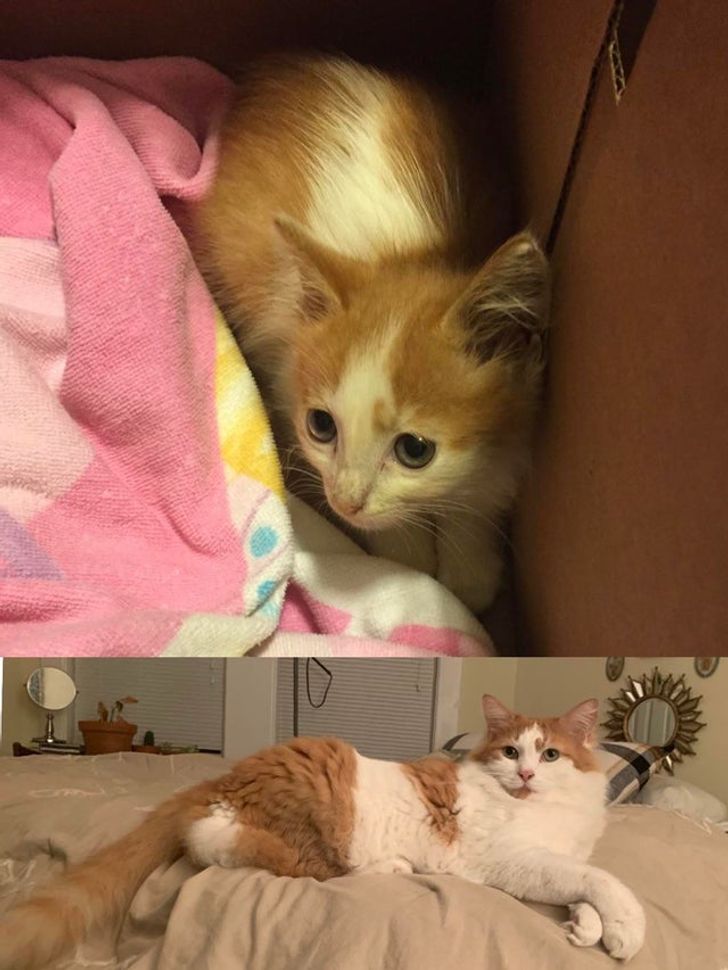 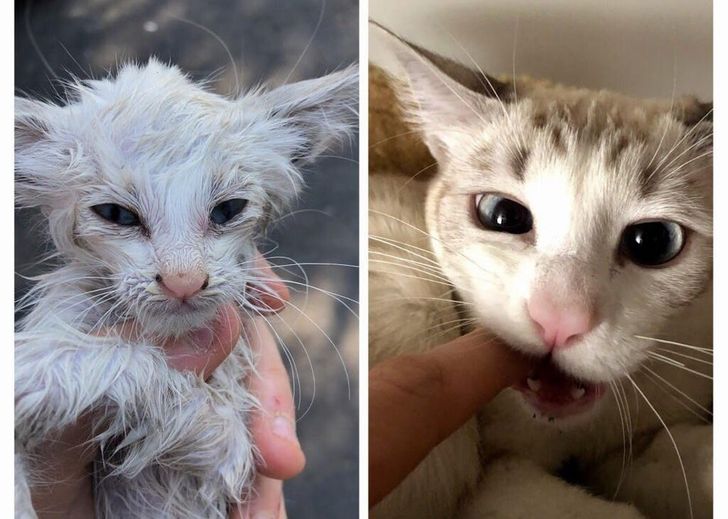 23. “This is Kai, he followed me home almost 5 months ago. He was full of ticks and fleas, has some infection on his eyes and ears but now he couldn’t be healthier (and happier)!” 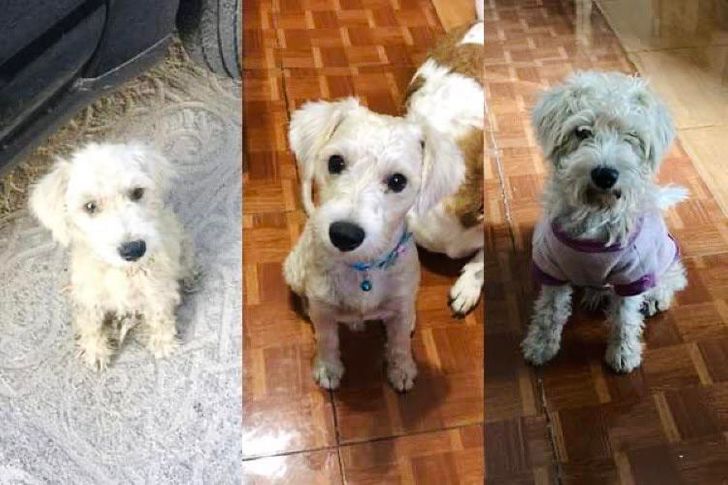 And we have reached the tail of the boat. I hope you guys had a very wholesome experience. It makes me extremely happy to see such comparison pictures of animals going from nothing to everything. That is the power of love ladies and gentlemen. It can heal anything and everyone. Just need a little bit of patience, you will see the connections build themselves.

I hope you guys enjoyed it. Feel free to share your thoughts in the comment section down below.