The ires of being a server are known by many people across the country. It’s one of the easiest jobs to get, because it requires so much consideration and patience, and comes at the cost of a lot of terrible mental health. After all, working in customer service means putting yourself in the way of customers who can’t show some basic etiquette for the life of them. It’s not even an exaggeration at this point, almost every single person I know who’s worked in customer service tells me as much.

There are people out there who treat servers like absolute garbage simply because they’re servers, and the customers feel like they’ve got the right to their actions and time. And most of the time, the bosses in charge of the restaurant or eatery where the server works, they usually side with the customers. Because, after all, a happy customer is a regular customer, and that means more money. Sometimes, however, you get cool bosses who side with the servers.

It starts with an explanation. 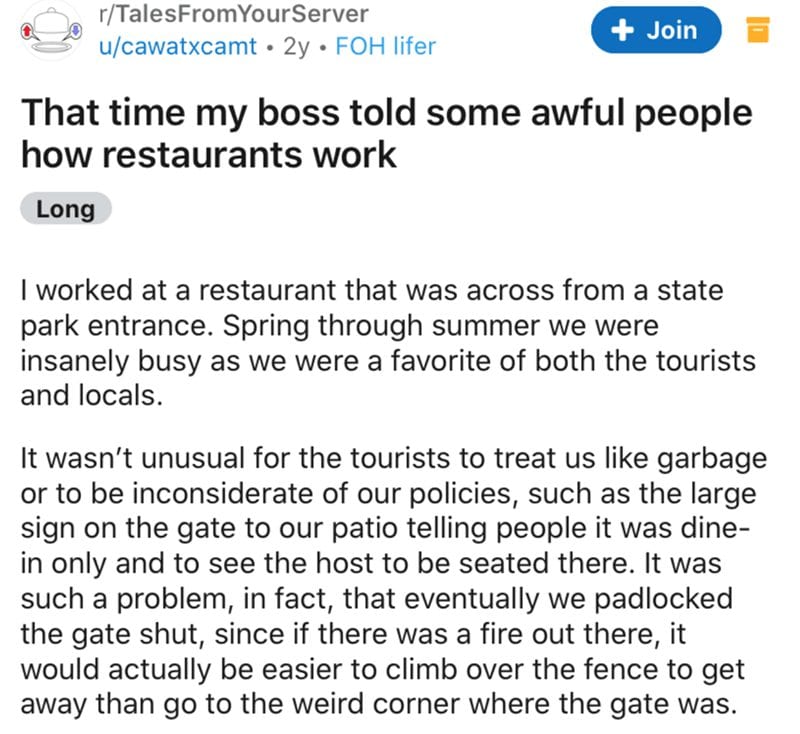 A commenter gave their own story;

I love awesome bosses. I had a problem once with a well known chef coming in. I waited on his party of 4 and they ran me ragged. His wife wanted the soup but didn’t want any of the ingredients in the soup so she asked me to legit ladle everything out but the broth. They were super extra all night, but I got through it. He pays and I think that’s that, but he legit came up to me and made sure to hand me 73 cents as a tip on a 200 and something bill? I was so pissed but I was like “whatever” and moved on.

The tourist family was very demanding. 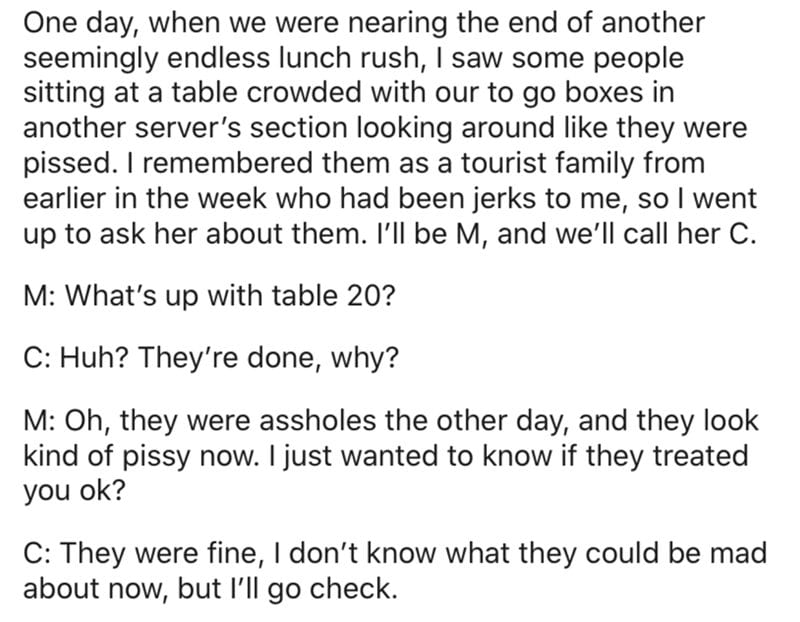 The next day I got called into my bosses office and I thought he had gotten a hold of her and said some bullshit. But nay, I told the chef what happened the night before and he told the owner the next day. When I got into her office she was like “I’d heard stories of him treating servers like shit but I thought it was an exaggeration.” she then showed me a text message exchange she had with him that morning basically demanding to know why I had been tipped so low?

And the united server front was too much. 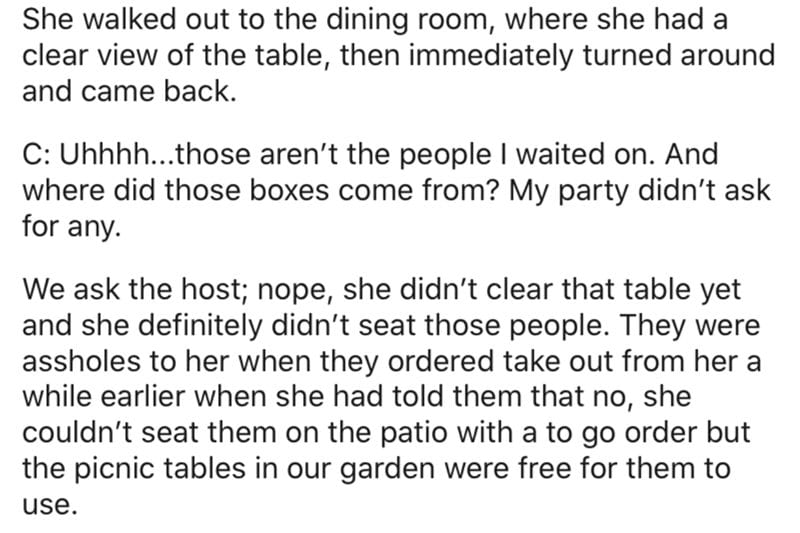 She asked him if I had done something wrong, because if I had done something that bad that warranted that kind of behavior she should know about it or (exact words) “are you really just the asshole everyone says you are?” He tried to say there must have been some mistake because his friend paid the bill so he assumed he tipped me, but she pulled up literal receipts and texted the pics to him that had his name and what not signed on the slip. She then demanded to know why he made such a show of giving me such a little tip if it was just a mix up? He never responded and hasn’t been back in. She offered to give me some cash to make up for it but I told her no because her response to the situation was worth millions in my opinion.

They couldn’t do a thing. 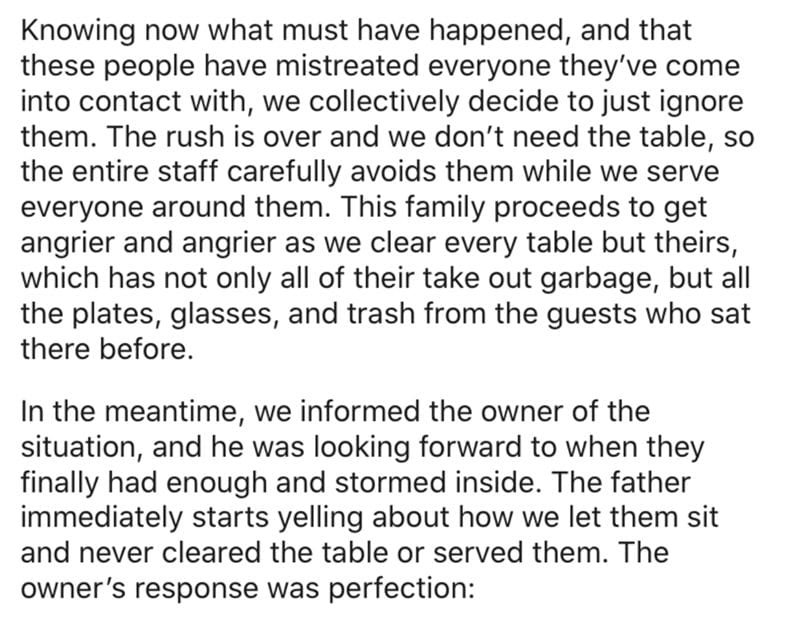 And the owner was on their side. 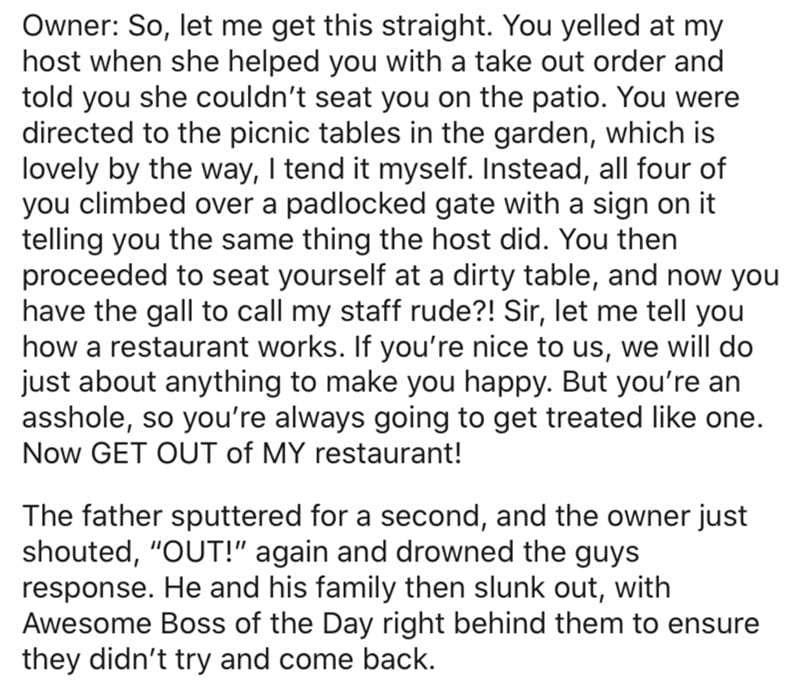 What about you? Have you ever had a similar experience? Tell us down in the comments!