I have never seen friendly crows.

When I was a little kid, I remember a crow sat on my head and pricked my hair to oblivion. It was honestly a scarring experience for me. However, apparently, not everyone is as terrified of crows as I have been all my life. It seems they are more intelligent than I give them credit for.

Because these particular crows actually helped their friend get revenge on his neighbor. I have no idea how they realized the neighbors were mean to him but they did their best to drive out the neighbors. Then again maybe it was because the neighbors weren’t too kind to the crows either. So whichever way you look at it, the neighbors got what they deserved.

Well, the whole story is summed up with this however why would you read it in its entirety? 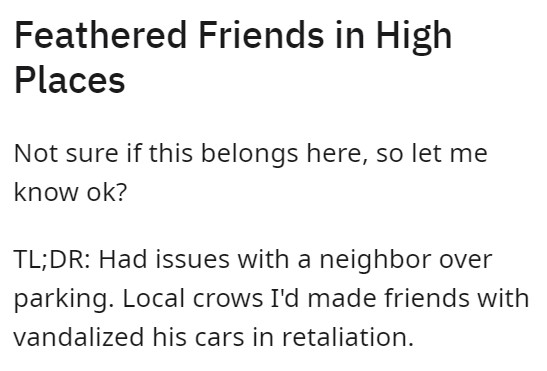 I mean that gives him pretty good reason to do that.

It is never a wise decision to get mad at someone doing something that is legal and allowed by the law. 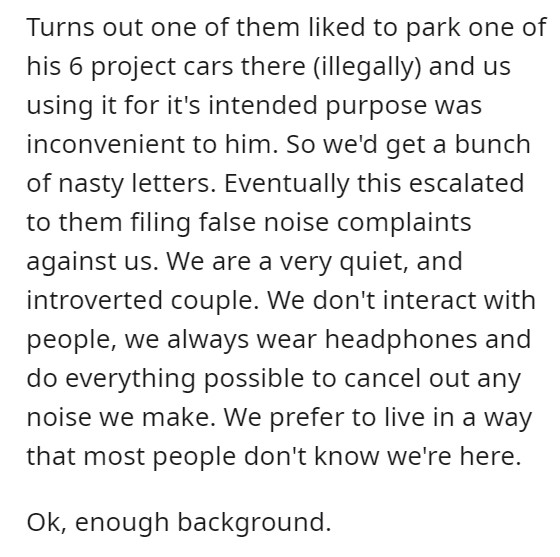 So what you are telling me is that you trained the crows and they liked you well enough? 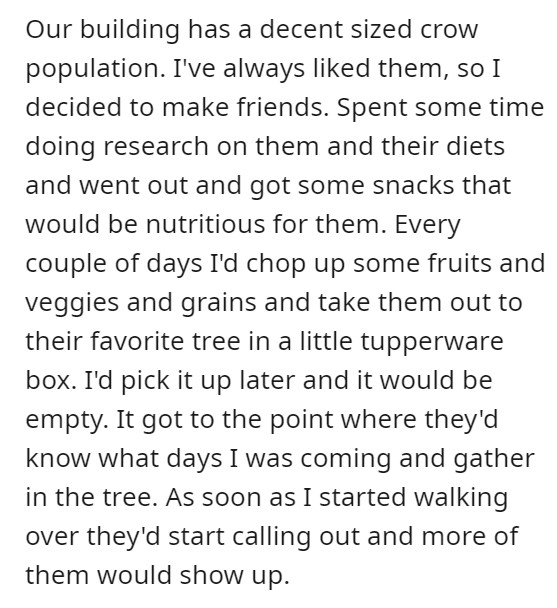 At this point, the neighbors were being mean just for the sake of being rude. 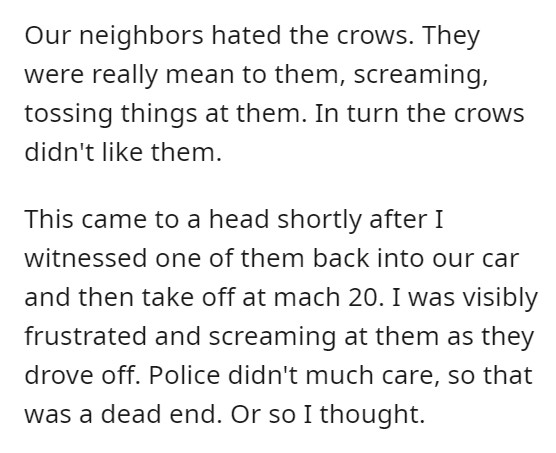 People like these always have enemies and that means they always get paranoid. 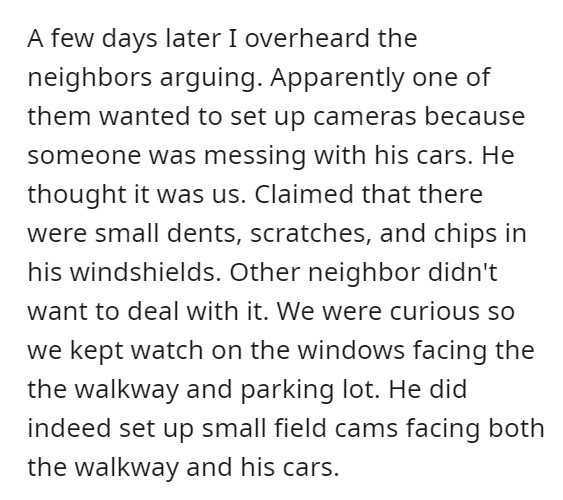 I take back everything I said before. I am even more scared of crows now. 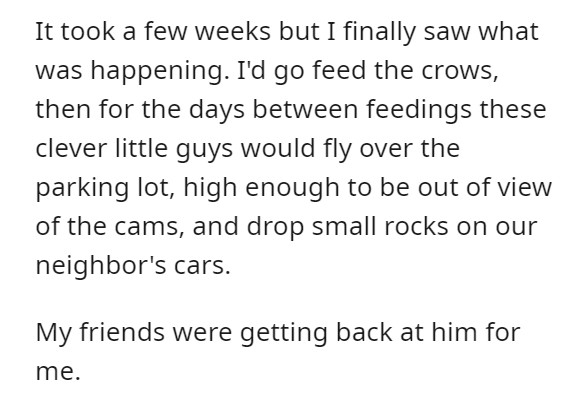 So the crows basically drove them out? They deserve extra treats for this. 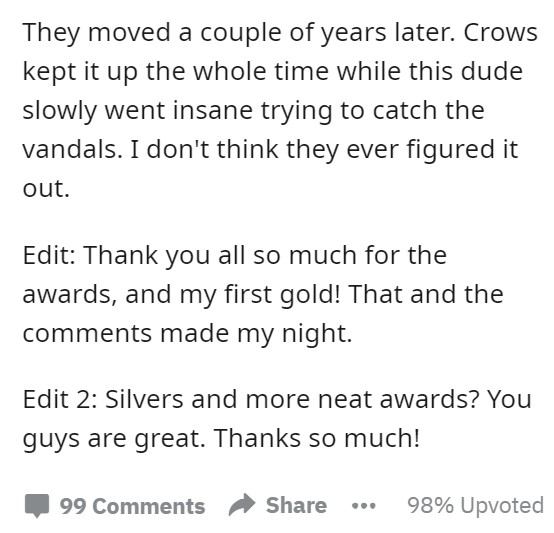 Did you also know that crows will chase away hawks from chickens? I have a few chickens and the crows like to nosh on the goodies I give them (the chickens) occasionally, the chickens don’t mind the crows and I like crows (beautiful birds). –Evil_Mel

You learn something new every day. 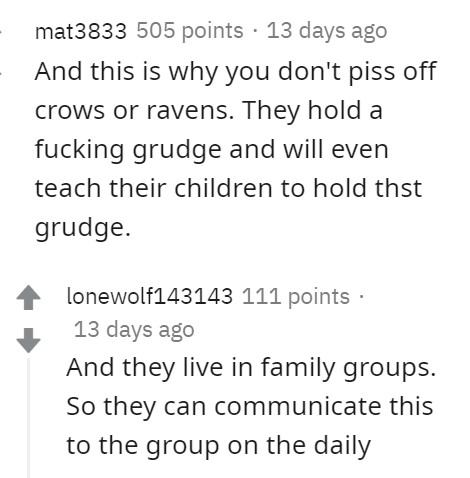 We all need to have crows as friends. I know I don’t want to be on their bad side after hearing this. 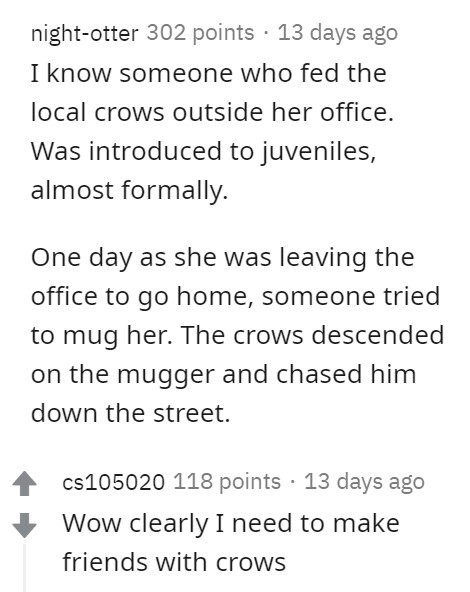 Birds are smart- freshman year everybody’s outside at lunch and some seagulls were by a bench. A Russian guy in a black leather jacket with his friends threw his chocolate milk at the seagulls, soaking one and turning it brown.

They all laughed, birds flew out over a field, u turned and flew back over him and shitted their white shit all over his black leather jacket- everyone laughed at him he got embarrassed and ran to the bathroom. Birds win. –cadillacbee

I think we all needed a bit of a laugh at this point. 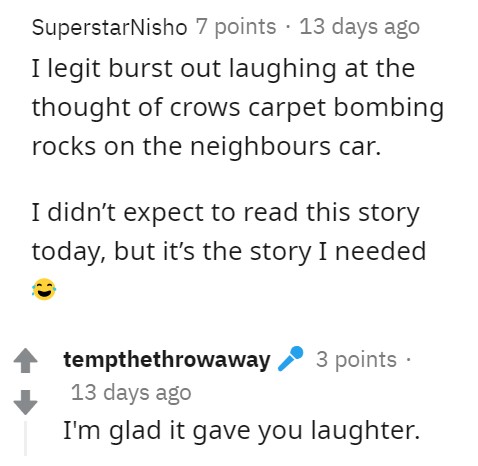 Have you ever made friends with crows? if so how did that go? Let us know in the comments below.