It’s simple – Don’t take what does not belong to you.

Theft is not a joke. A lot of people brush away theft when it is of small things that don’t have a lot of monetary value. It is not just about money. Sometimes things mean a lot to you even if they aren’t expensive and losing these things to someone who just decided to take what wasn’t theirs really sucks. Always ask for permission before using something that does not belong to you. Theft is not okay, even if what the person took was not expensive. I don’t care even if it is snacks. I hate coming home after a long day, just waiting to chill in my bed and have my snacks but the second I get home I find out someone took them without asking me. Even if it does not have monetary value, it is still very ethically and legally wrong to take what is not yours without the permission of the owner. This is why the law punishes people.

However, sometimes people never learn their lesson and think the law is just a joke. This man on Reddit decided to teach his flatmate a lesson after he would not stop stealing things that did not belong to him. Sometimes if the law isn’t helping you, you have to take things into your own hands Scroll down below to read the whole revenge story:

So the story is about 4 guys sharing a residence but David had a nasty habit of taking what didn’t belong to him. 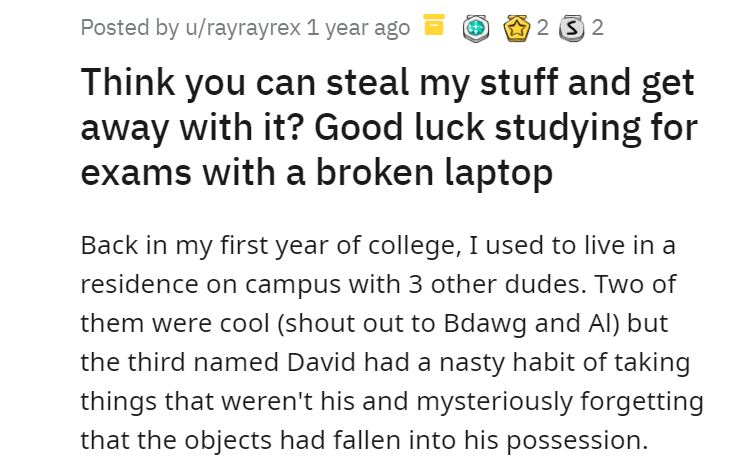 He would steal items that were not very expensive so he didn’t get in trouble for them. 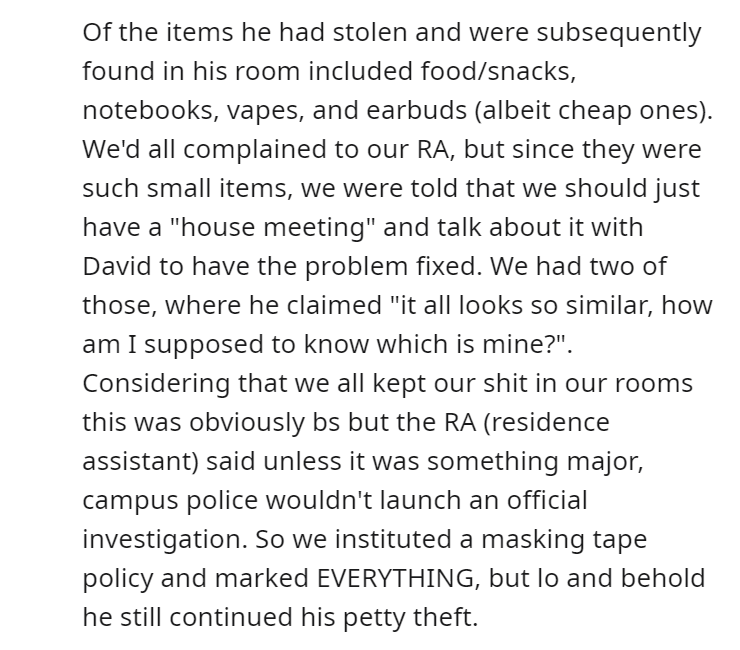 So that is when his revenge plan kicked in. He got a USB that would ruin David’s laptop.

David clearly hadn’t learned his lesson and stole the USB even though it was labeled. 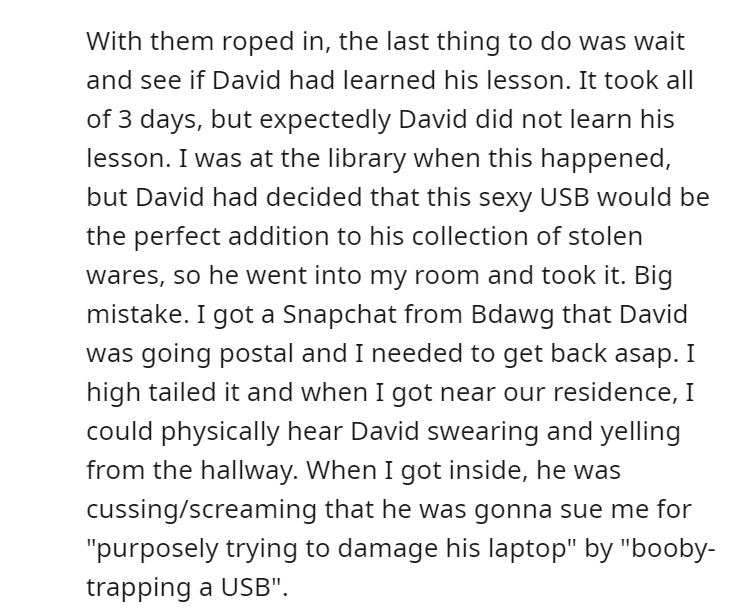 David threatened to sue the guy and kept lying to the RA. 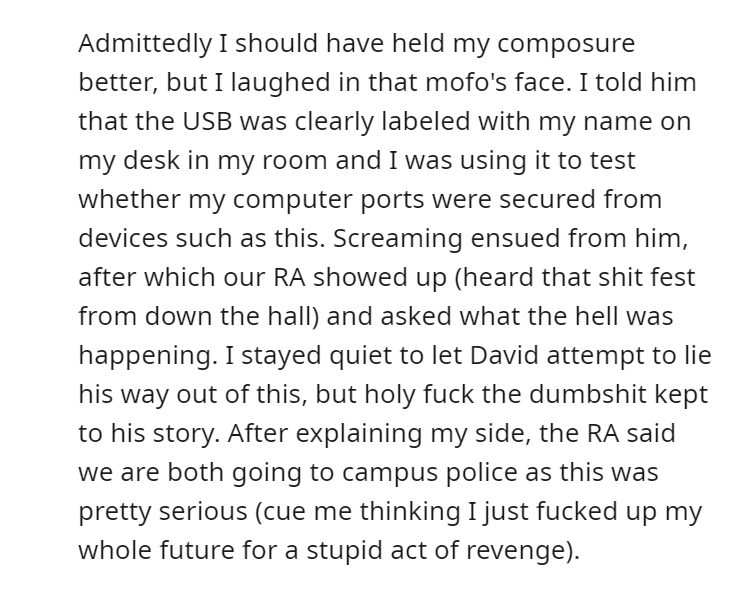 Then the campus police confronted him about stealing and said the guy was not at fault. 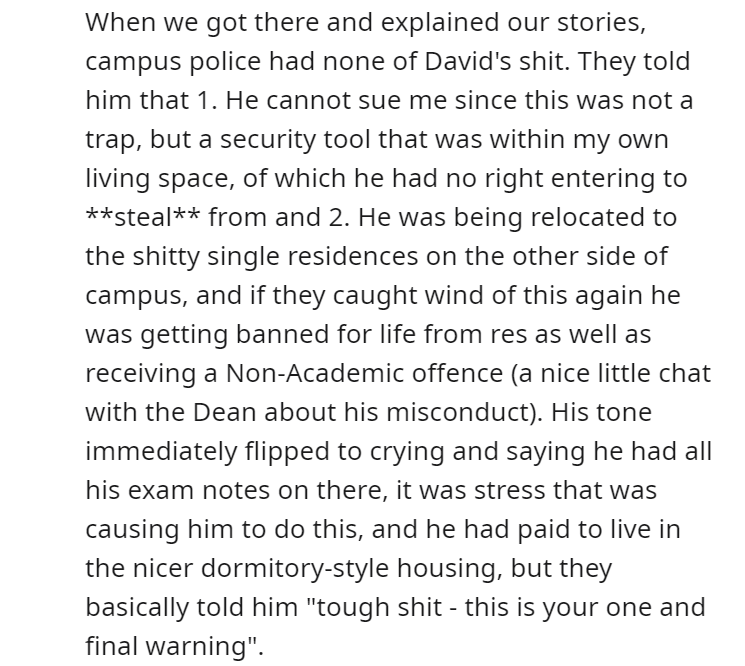 So they kicked David out and enjoyed a spare room for the rest of the semester. 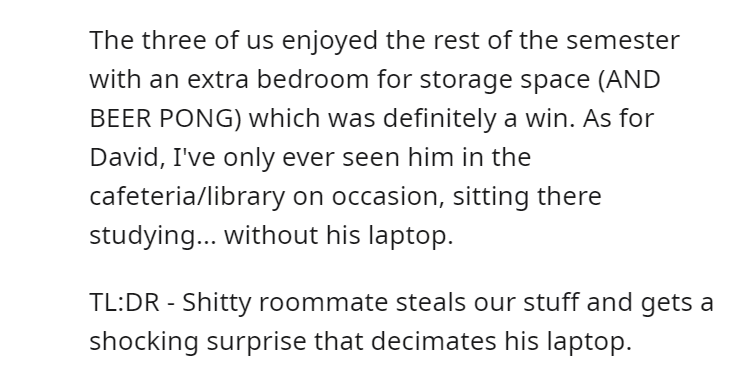 Revenge is sweet, isn’t it? I agree that it might be a little too much for David to lose all his study notes but the guys tried playing it nice first. He didn’t listen and they involved the authorities, who said they couldn’t do anything about it. So they finally had to take justice into their own hands and it was delivered sweetly!

This is what other Redditors had to say about the Pro Revenge story: 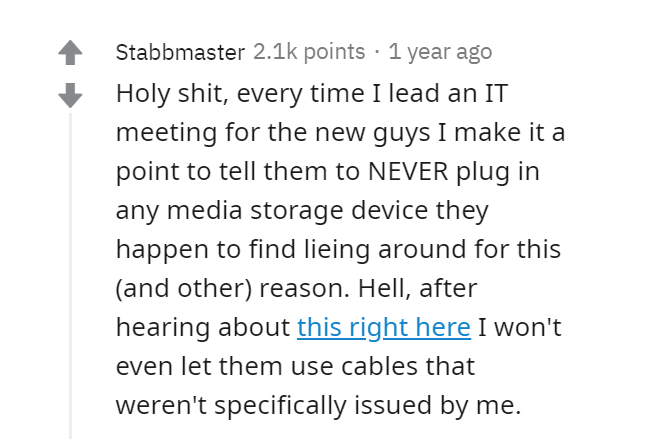 I hate it when that happens.

His side of the story? He was a thief! 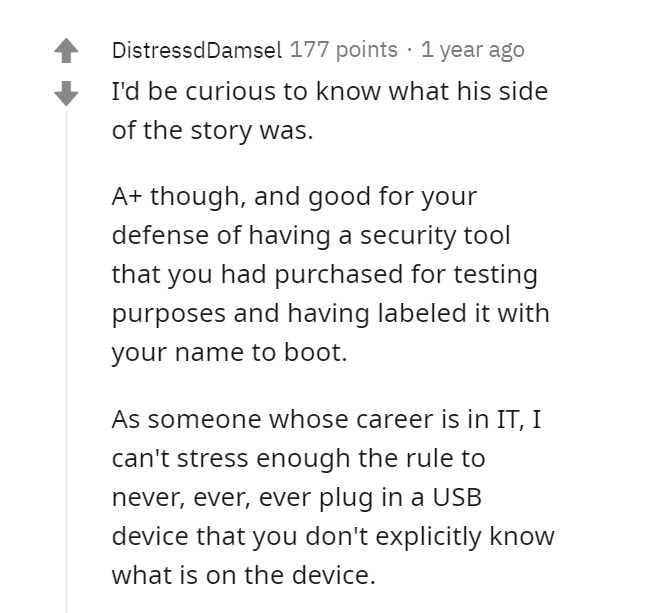 This is just sad.

Some IT techs tried explaining the USB to him. 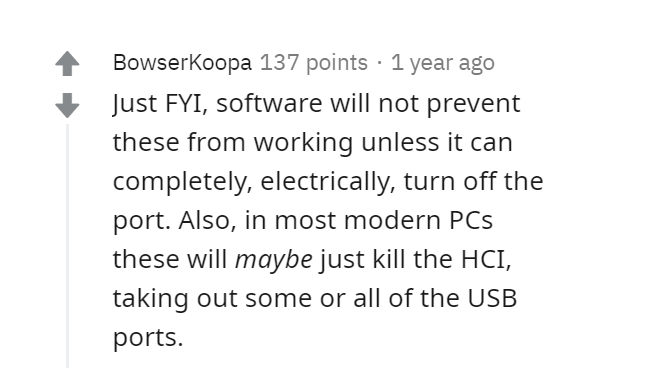 He got what he rightfully deserved.

I hope he doesn’t test the USB for himself either. 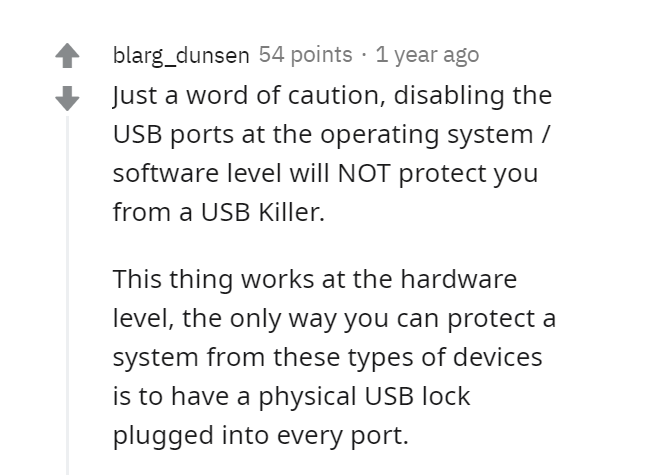 He really does need help.

Who do you think is in the wrong here? Do you think David deserved what he got? Share your thoughts with us in the comments below.