Everyone always sides with the customer.

I understand that many managers and the likes don’t really care about their clients and will do anything to ring each and every penny out of them but that is not always true. Sometimes the customer is the one who wants to take the advantage of someone else’s good nature. That is exactly what we have here. You see this guy built his customer a beautiful Star Wars inspired arcade machine which would make any Star Wars fan happy. However, it got slightly damaged on the way.

And when I say slightly I really do mean just a slight dent in the arcade. Although the seller didn’t say ‘just deal with it’. After all the arcade was insured, and he gave him many options including fixing it for free or just refunding the whole amount. I mean I would be happy with any of those options. But that guy wanted more. He actually wanted to keep the machine and have the whole amount refunded to him. The story however does not end there as there are many more twists and turns.

And so the thrilling story starts. 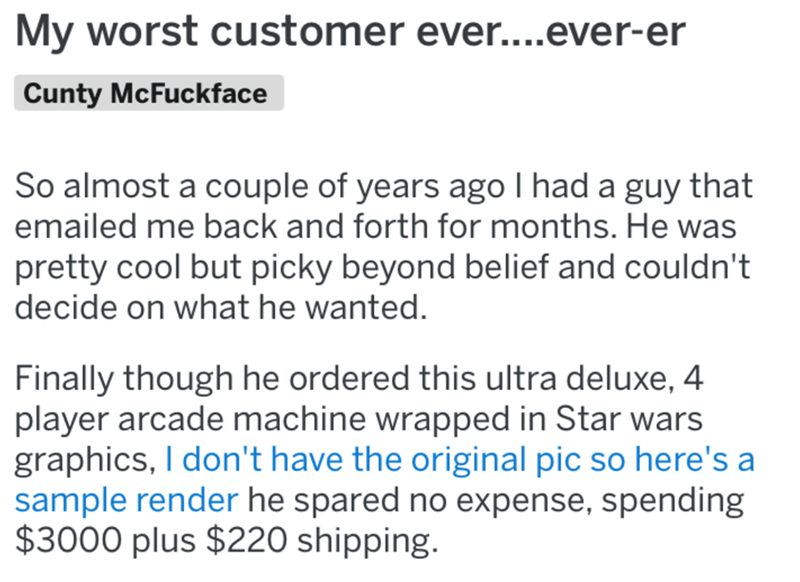 I recently bought a computer and a similar thing happened to me. 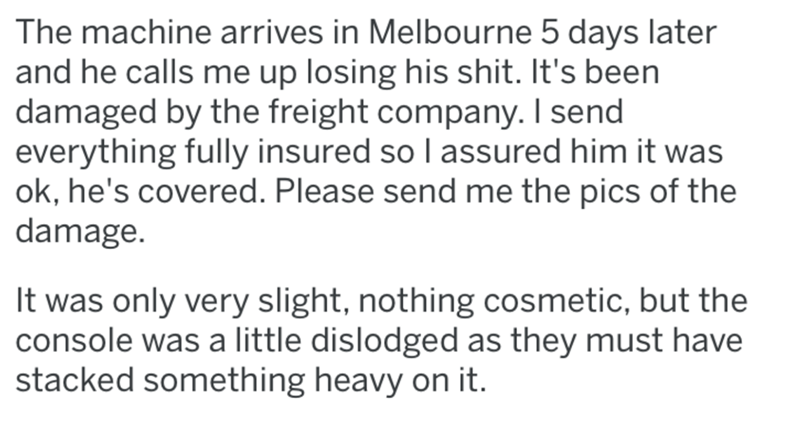 And just like this the seller was nice enough to replace it even though it was somewhat my fault. 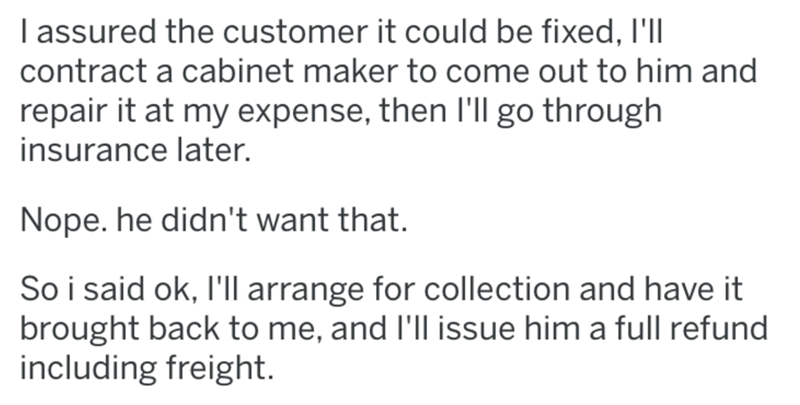 But this guy wasn’t having any of it. 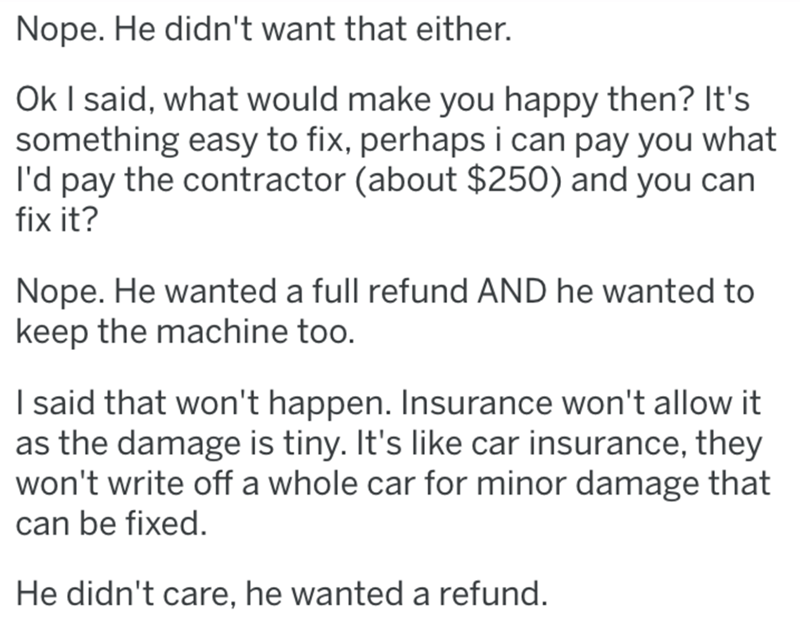 The machine was similar to this if anyone is curious. 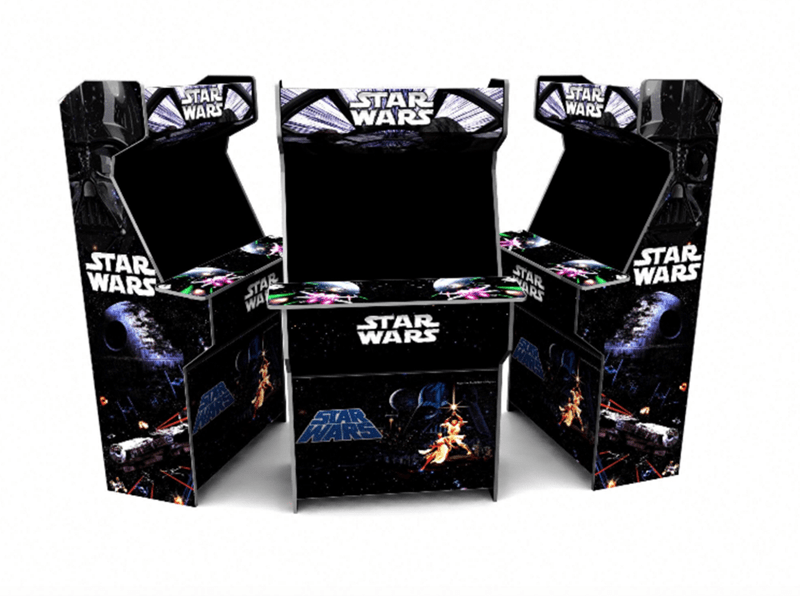 He decided that he was going to file a dispute. 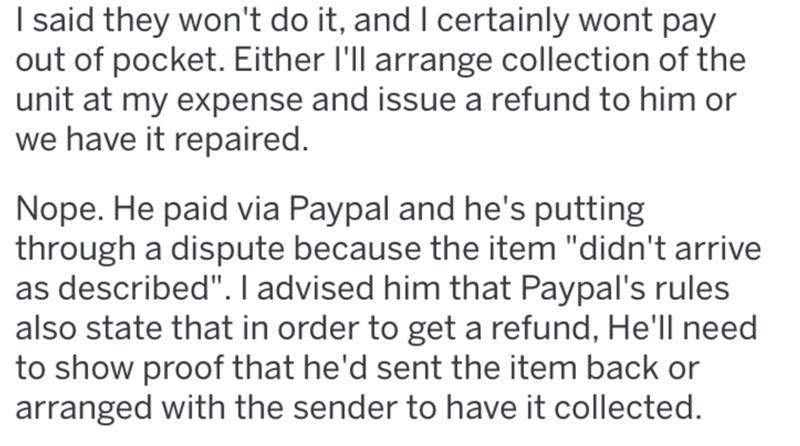 The guy knew that PayPal would side with him, so he filed a dispute. 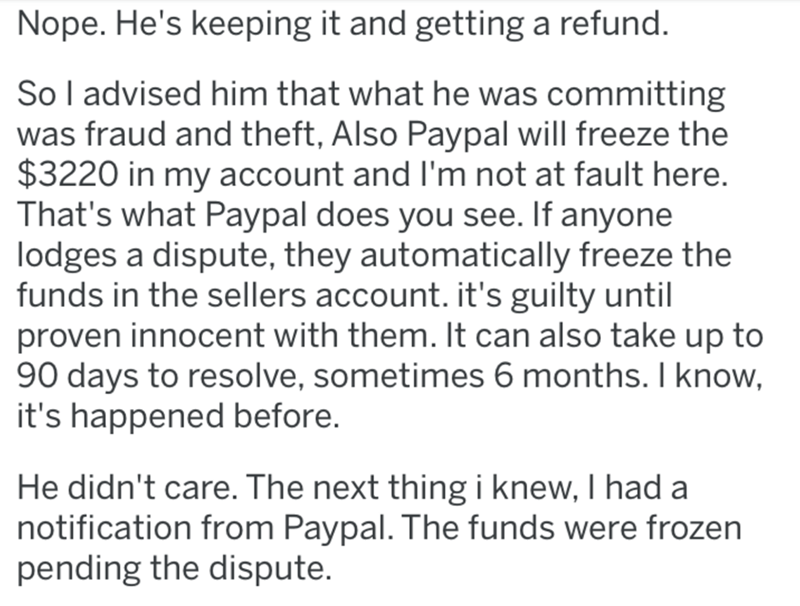 Been on the receiving end of this before, I sold someone a virtually new iPhone through a forum a few years back, I think it was an iPhone 5 when they first came out. Buyer paid for the phone and a bunch of cases, I shipped it off they got the phone, said it was great, feedback gets left so everyone’s happy right? So I thought until a few weeks later when suddenly I get an email from PayPal, the buyers filed a claim saying that the phone was damaged in transit, the screen was totally shattered apparently, and they want a full refund.

I write a response explaining that the buyers had the phone for a bunch of weeks now and if they had an issue with the phone being damaged during transit why didn’t they contact me earlier, why did they say they were happy with it and why did they leave positive feedback? While waiting to hear for a response from them, I got bored and decided to do some rudimentary internet detective work and discovered that about 3 weeks prior to the PayPal claim the buyer had been trying to sell an iPhone that was the same spec as mine, they were getting ready to send it but had to back out from the deal because the screen as damaged…

Now this sounds suspicious. I screen cap everything, send it to PayPal as additional evidence, and explaining that I don’t see how I’m responsible for damage that occurred 3-4 weeks after shipping the phone to them. Hoping it’d be a slam dunk. It was to PayPal, they ruled in the buyers favour, despite the phone arriving in perfect condition and the buyer damaging the phone themselves at some point, I am responsible for the damage, I guess they think I drove to the buyers house, sneaked in when they were asleep and cracked the screen, then sneaked out or something.

I got somewhat fortunate because for whatever reason the buyer didn’t ship the damned thing back in the time frame required by PayPal, and they reversed their decision. –muteterror

And so he set out to make his case, but it was all for naught as PayPal sided with the buyer anyway. 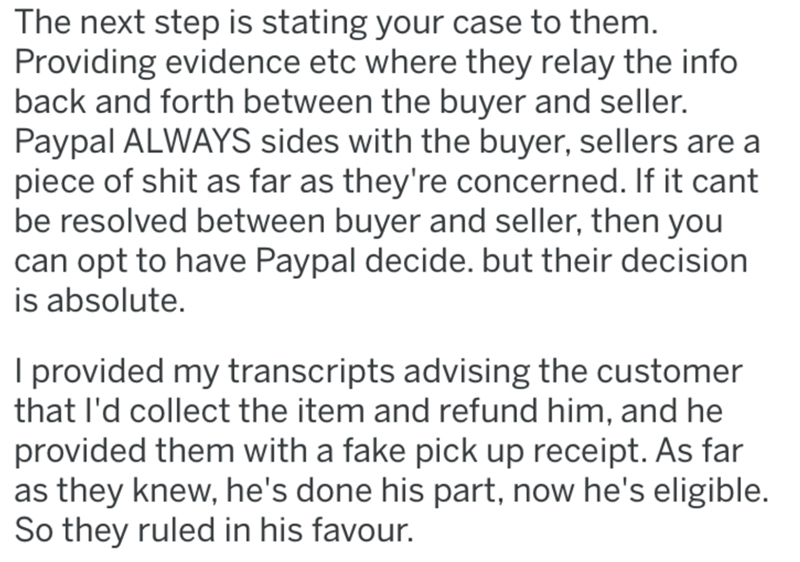 Understandably the seller was angry and wanted his machine back.

But this is when things took a weird turn. 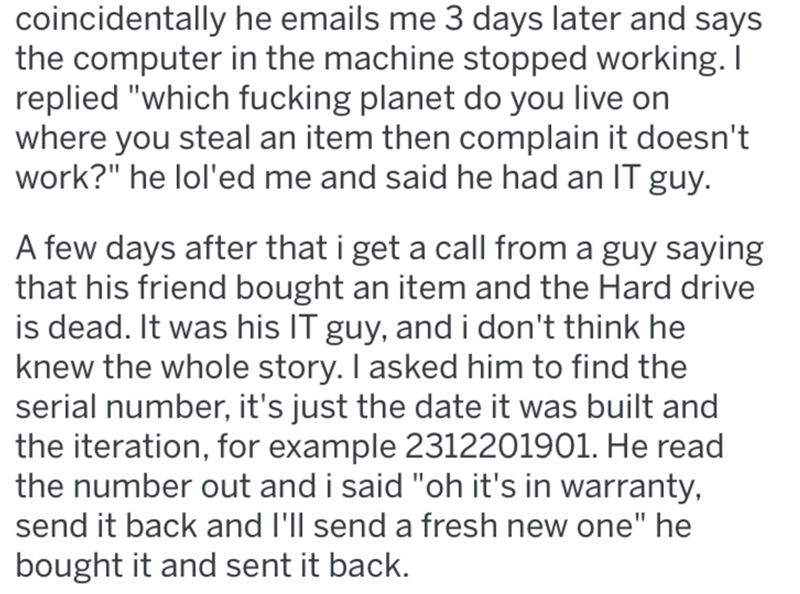 You see the hard rive cropped up with a slight problem which could be fixed easily. 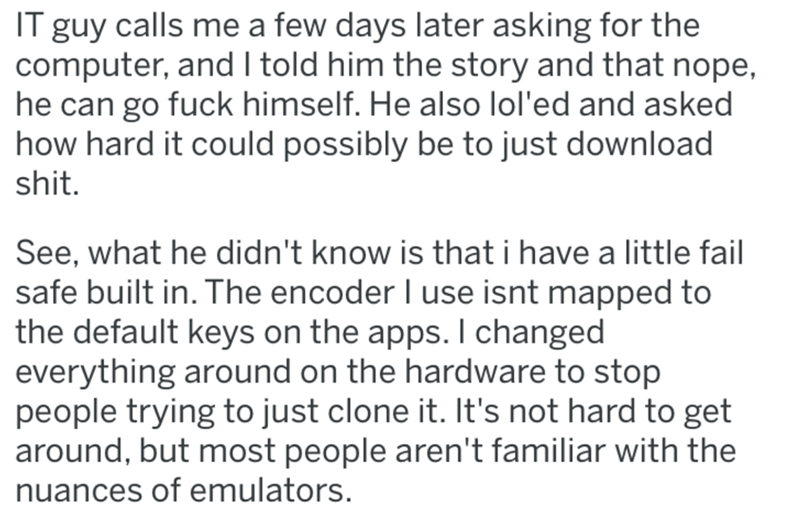 And this is how he ended up getting the computer back. 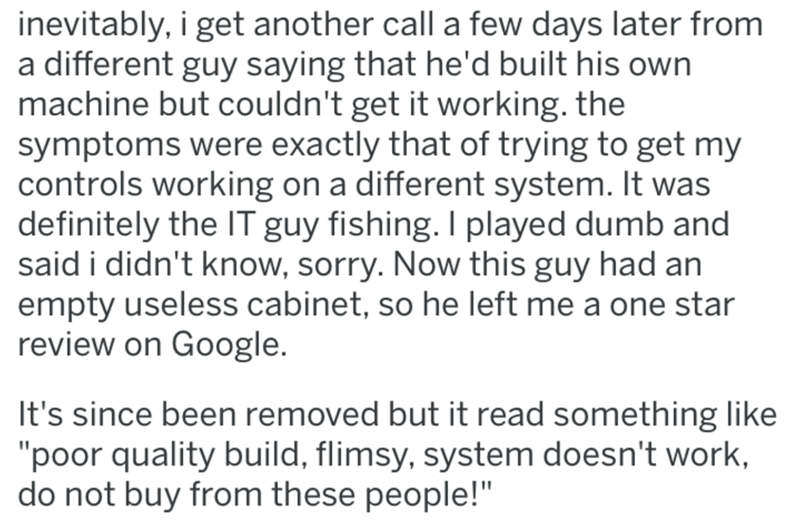 The buyer could try to fix it all he wanted, but it wasn’t going to work. 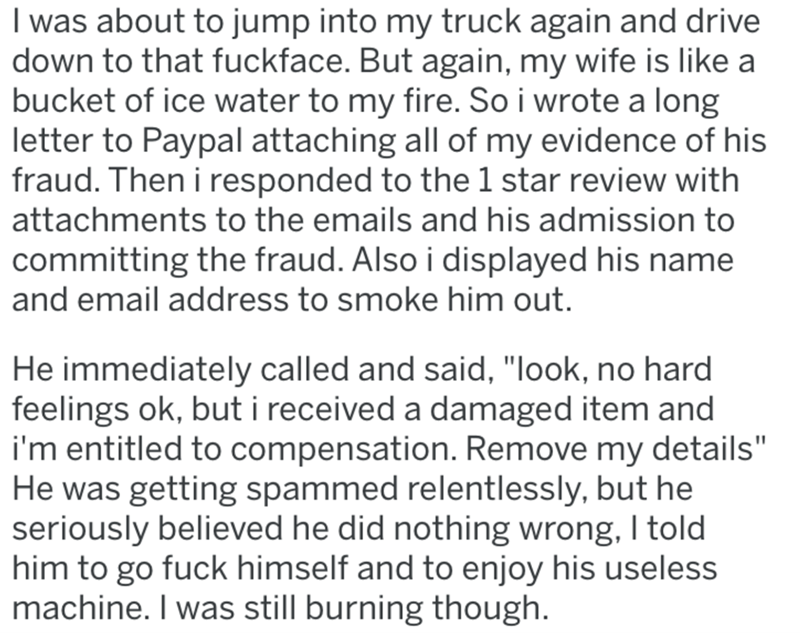 He thought this was it, but it wasn’t.

Somehow he saw his own machine on eBay. 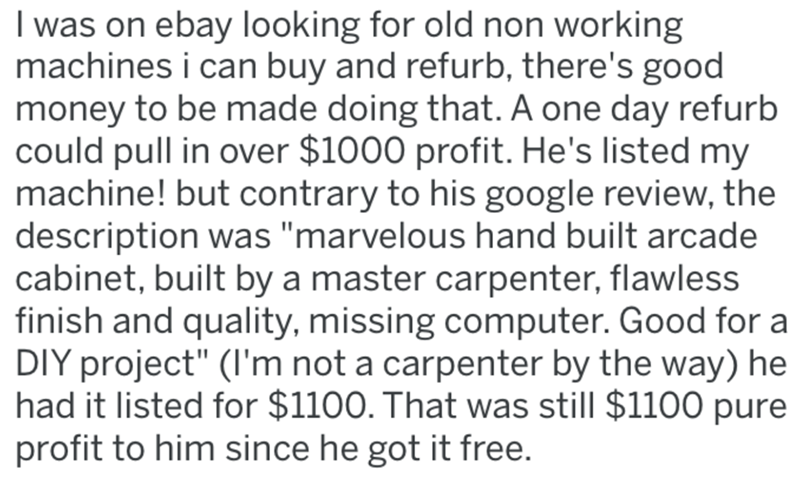 And that is when a brilliant plan formed in his mind. 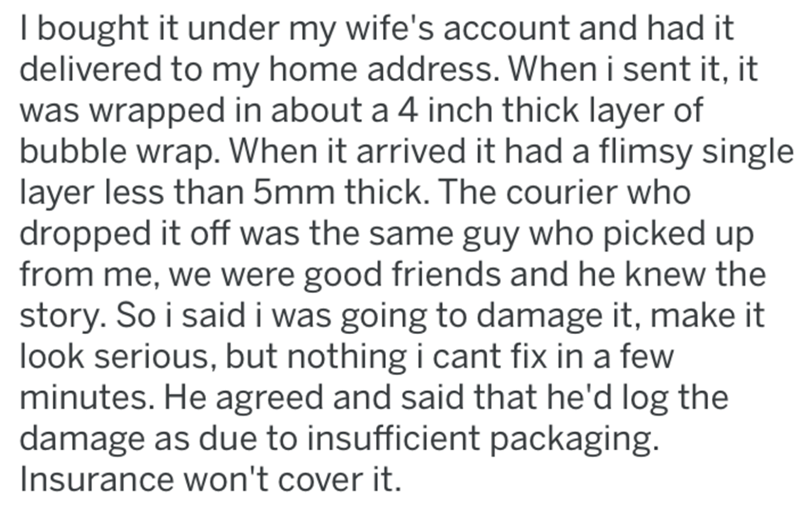 So he basically got part of the money back, but it didn’t end there. 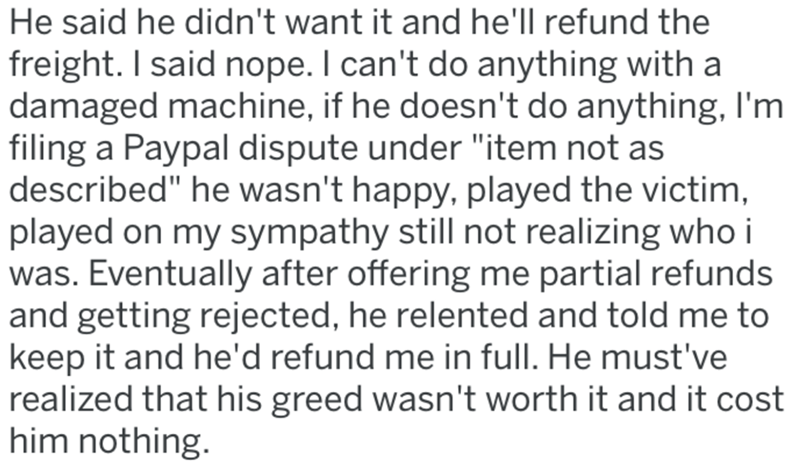 It somehow gets even better and I just love this story. 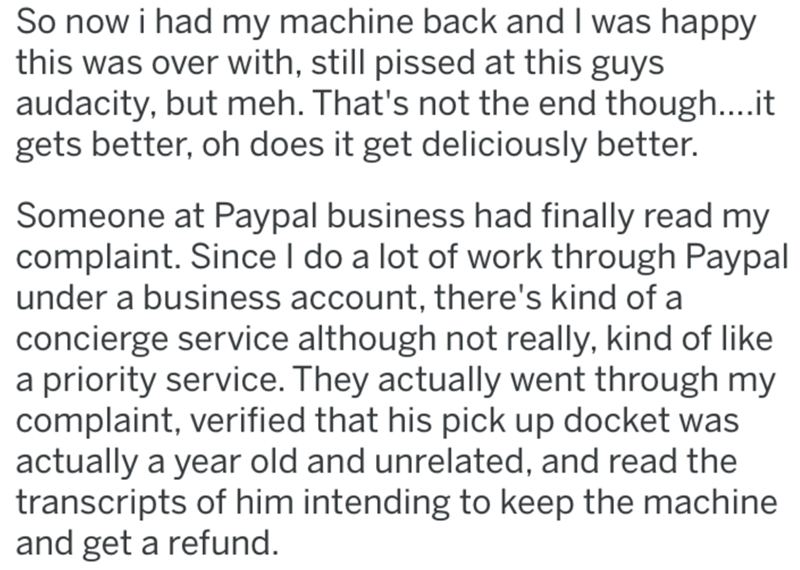 So yes, he got the full money back and also got his machine.

I would say this turned out pretty well for him. Have you ever had to deal with a customer that you wanted to punch in the face? Comment down below and let us know.