There is no shame in asking for help.

Even if you are asking for help from a supposedly mortal enemy. At least that is what one would think when they see a big dog helping a tiny kitten climbing up the stairs. We all know most of the time dogs and cats don’t get along, but is it because we grew up watching tom and jerry, or is there some truth to it? Well, it is not as simple as just that. You see, cats and dogs are very different when it comes to communicating.

That is why it can take a very long time for them to get along even if they are growing up together. And this is a luxury wild animals don’t have. Supposedly cats and dogs both have the instinct to chase smaller prey and thus cats like to catch rats and dogs like to chase after cats. Not only that but a cat wagging its tail is seen as aggressive, while a dog doing is seen as friendly or construed and excited.

I may be putting it in very simple terms but most of the time, it is because of miscommunication. However, they can learn to understand each other as shown in this adorable display of a dog helping a tiny kitten get up the stairs.

As you can see, the kitty wanted to follow the dog but it was exceptionally hard for her. 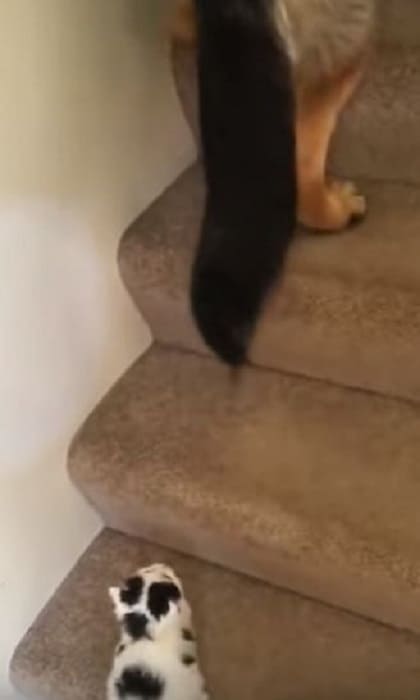 Because of her small size, it took tremendous effort to get up every stair. 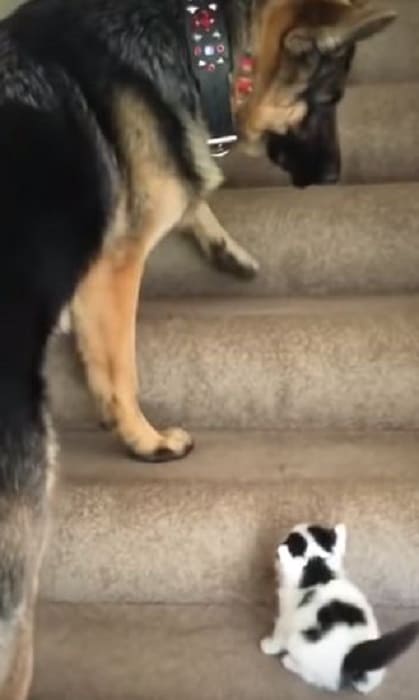 The dog clearly saw that and decided what to do to help the kitty. 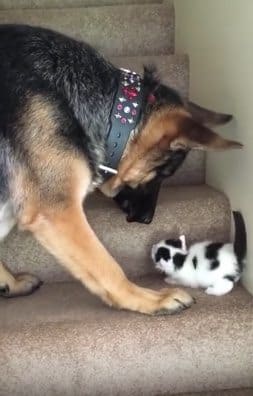 The signals and behaviors that cats and dogs use to communicate are different and can lead to signals of aggression, fear, dominance, friendship, or territoriality being misinterpreted by the other species. Dogs have a natural instinct to chase smaller animals that flee, an instinct common among cats. –Wikipedia

He tried to be as gentle and patient as possible to grab the kitty so he wouldn’t hurt her. 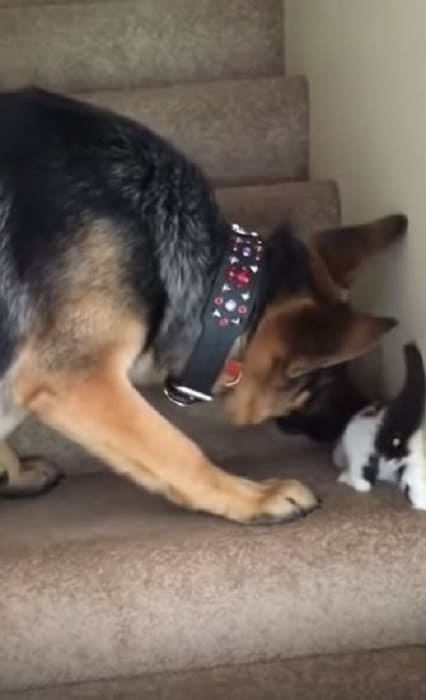 It may look like he is hurting her, but the kitten is absolutely fine and the owner is just beside them looking over everything. 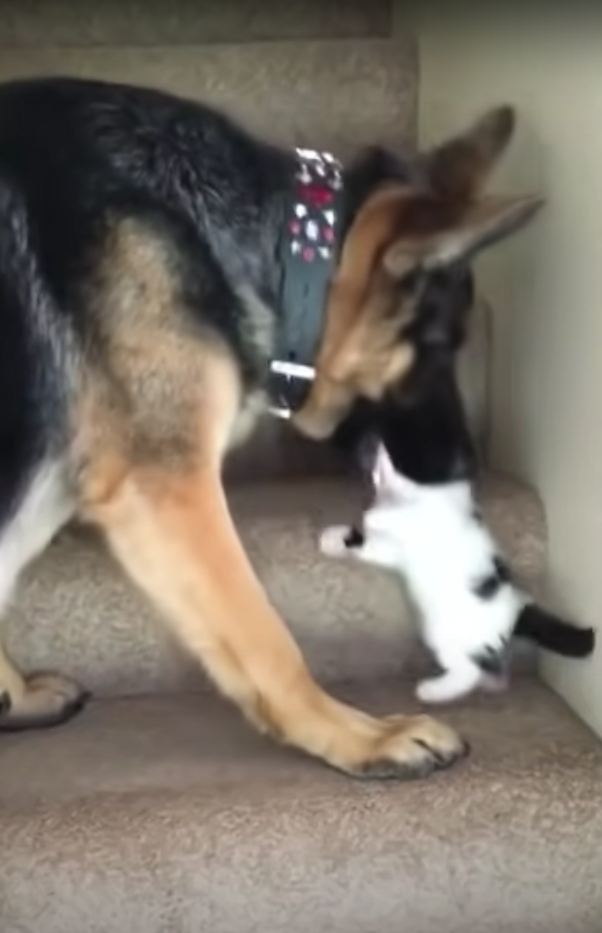 It is such a simple display but it shows the bond between them. 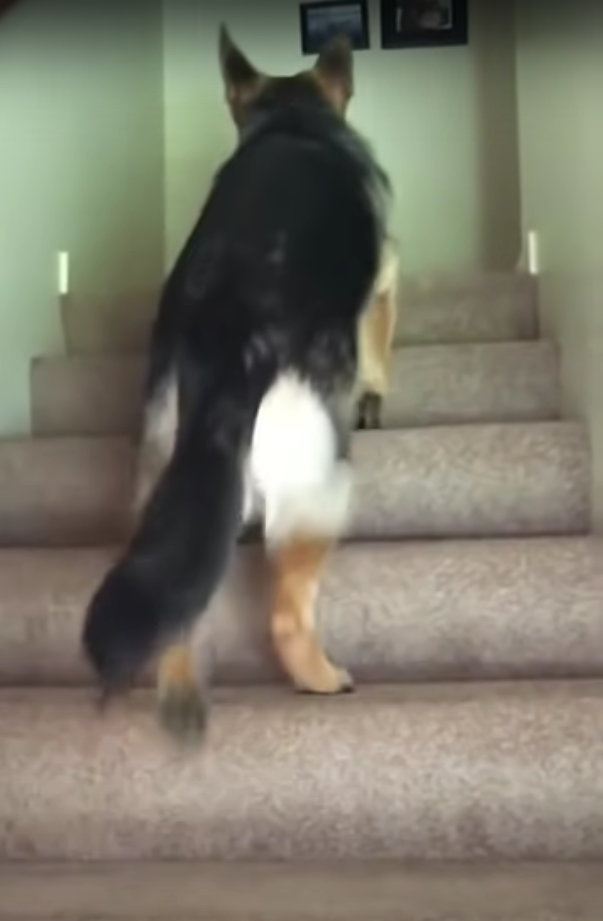 Both of them are perfectly fine sitting at top of the stairs and it looks like the start of a beautiful friendship. 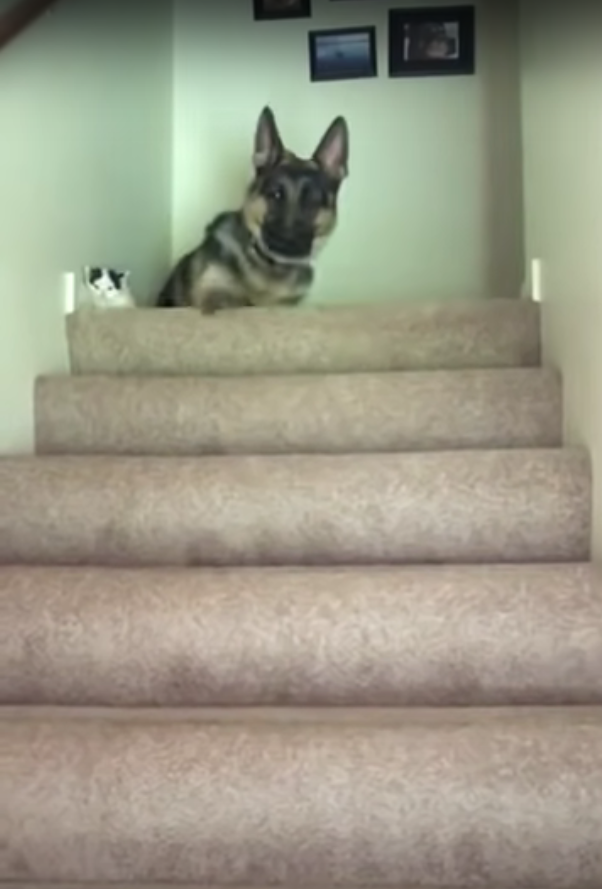 What are your thoughts on this display? Do you think the dog was being gentle or do you think he may have slightly hurt the kitty? Comment down below and let us know.