Can you tell gender by a sentence someone has written?

Unless that sentence is ‘I am a woman’ it has to hard to guess the gender. Well, apparently not since a Twitter user asked women on the Internet to talk about women without mentioning the gender once. Turns out there are many things that most women have to face and you can tell the gender by a cursory look through these tweets.

Not only are the following scenarios sad, but they also shed a light on our world. We like to think we have come far when it comes to equality but there are still so many things that women face every day. I am not saying men don’t face these hurdles as well but I am talking about predominantly.

You can take a look for yourself by scrolling below and taking.

It may sound difficult but many women did just that quite successfully.

She started it herself by telling about how she always has to be careful.

#1 After all men can only understand other men right?

#2 But when it’s a guy, it’s called being confident.

#3 That shouldn’t be anyone’s business.

#4 It’s as if marriage is an achievement when it should just be a choice.

#5 And still getting no thanks from anyone.

#6 Of course they do, why wouldn’t they?

#7 And standing at the far corner as far away from them as you can.

#8 After all women are not supposed to sit with open legs.

#9 It’s as if a mother or a wife is all that a woman can become.

Living with my MIL while I finished nursing school I reduced my hours to part-time work and spent my “free time” doing things I enjoy to spare my sanity. She once very “kindly,” told me that when she was married she always made sure there was food on the table for her husband when he got home from work.

Now I’m a nurse caring for COVID patients and my husband is not working… he isn’t cooking for me and I’d never expected him to. I don’t believe she had the same conversation with her son. Such an antiquated expectation! –Emily

#10 Why? What is wrong with becoming stronger?

#11 Why does it automatically fall upon a woman?

#12 Is the Father not able to take care of his kids? 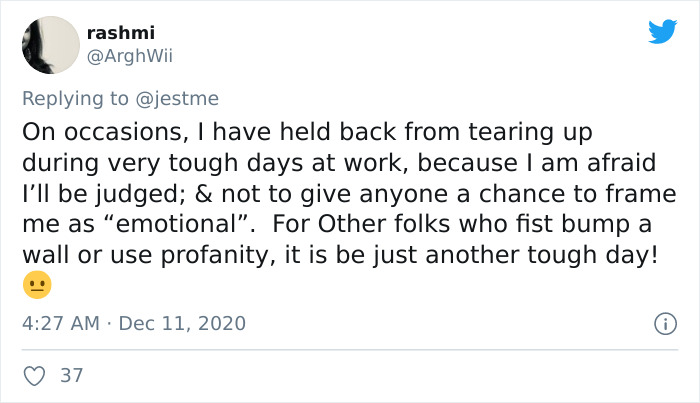 #14 I know somewhat of a difference but not that well.

#17 Women are only supposed to talk about fashion and makeup after all.

#18 Marriage or kids should never be forced upon anyone. 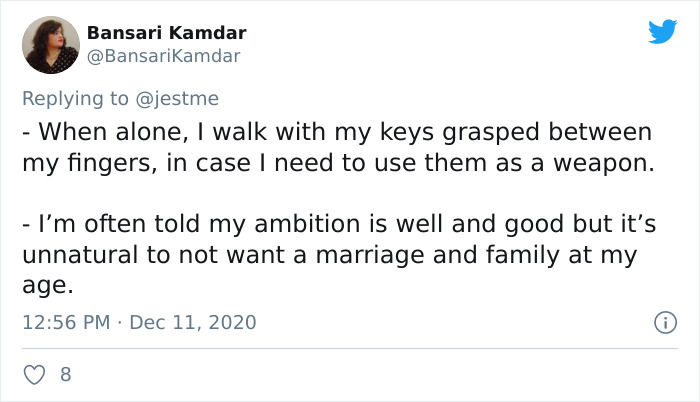 #20 Because who else would do it right?

I was a 19-year-old spinster double majoring in STEM fields and was told I’m attractive and didn’t have to do that. Another reason for me to do so. Wish me luck for more degrees in my future. Now I’m a proud and voluntary thornback. –K.

#22 This is true for many women around the world. 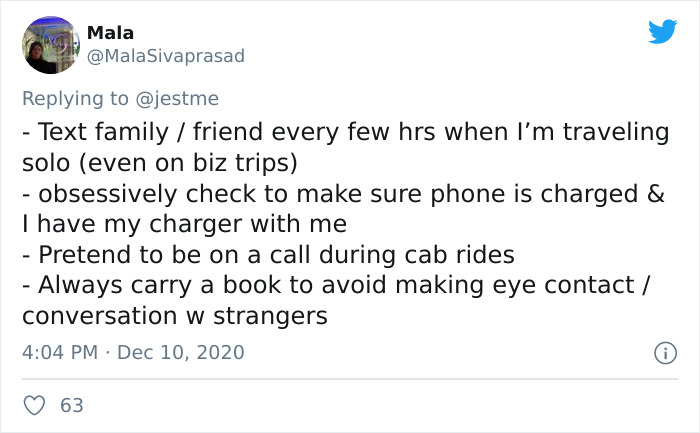 #23 That is the effect of everyone telling us we aren’t enough.

#24 You never know so it’s better to be safe rather than sorry.

#25 We have a lot of things to go through here. 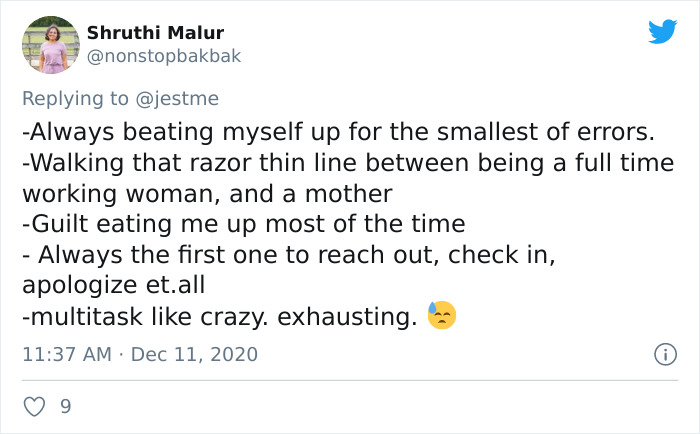 #26 Are their phones not working?

#27 Who can forget this tiny fact?

#30 Women are such bad drivers, right?

Have anything else you want to share with us? If so comment down below and let us know.