With her husband’s friendship with his close buddy Carl, this woman has now reached her breaking point. They’re inseparable, and her husband refers to Carl as his “nicotine.” He can’t seem to give up “it.” It all came to a head when her husband invited Carl to join them on their scheduled couple’s vacation. Her husband reasoned that cramming Carl into their two-person room with only one bed would be no problem. Her life was turned upside down when she learned that her husband intended to share the bed with Carl and force her to sleep on the floor. So, who’s the third wheel in this situation? It doesn’t appear to be Carl.

Of course, the internet is naturally skeptical, and nearly every remark makes reference to the fact that Carl and her husband appear to be more than simply friends. There are several references to “Grace and Frankie,” which, for the uninitiated, is a program whose premise is based on a scenario that is nearly identical to this one.
What are your thoughts? Is she making a mistake by removing herself from the situation? Should she just walk away from the situation and file for divorce? Please let us know in the comments section. Scroll down to see screenshots of u/post measures2013 as well as the reactions.

1. Here’s the story; Carl, the husband’s friend got widowed and the husband started being extra nice to him 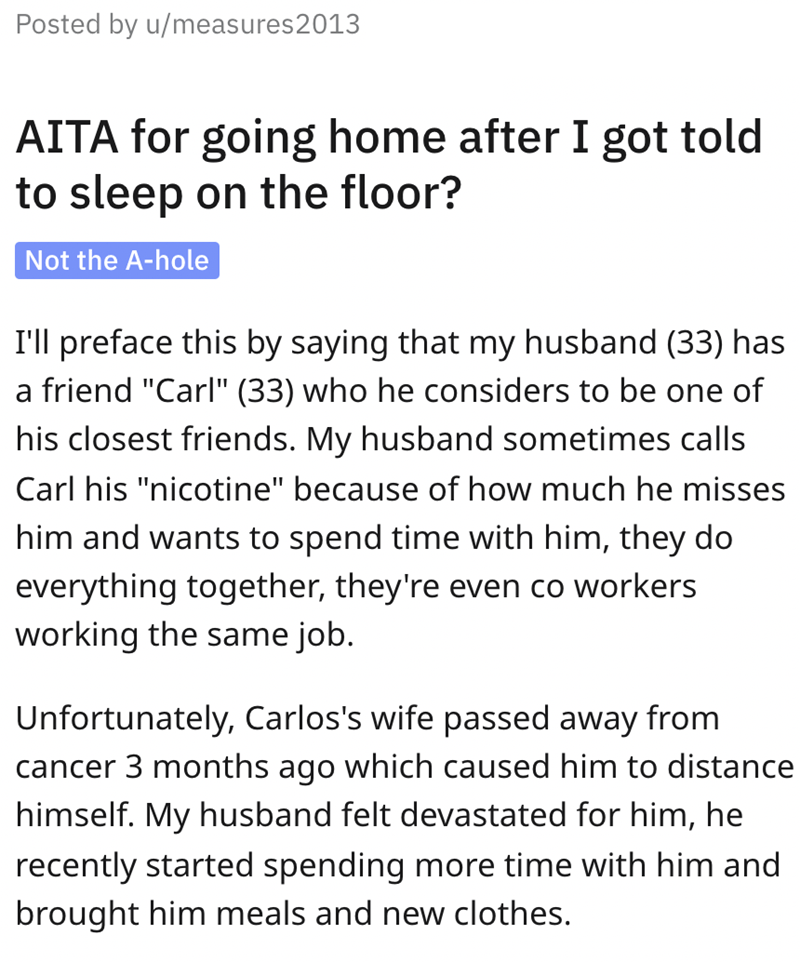 2. When OP booked a trip for his husband and her, the husband took Carl along with them. They did not even have  a budget for it and Carl could not pay either 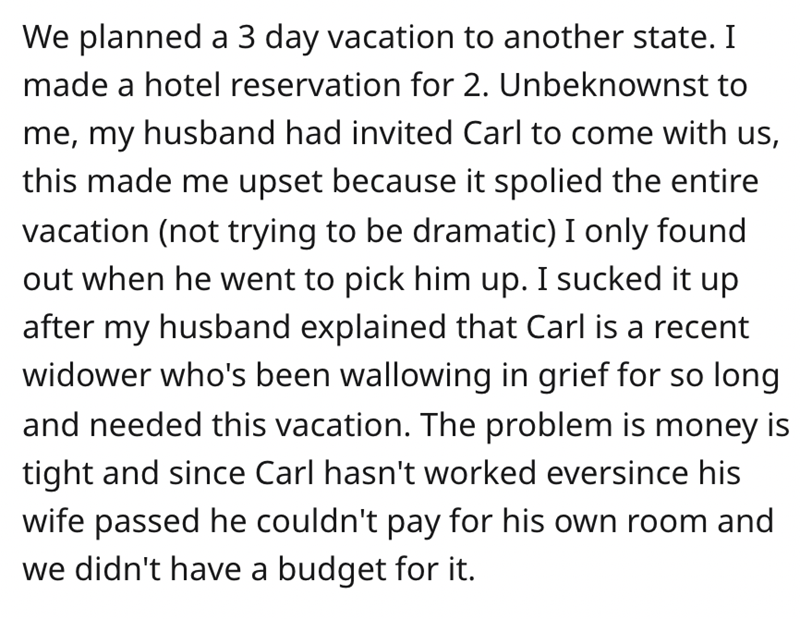 3. First night, OP was pulled out of bed to sleep on the mattress floor, she resisted but her husband was resilient and then she got infuriated and went home 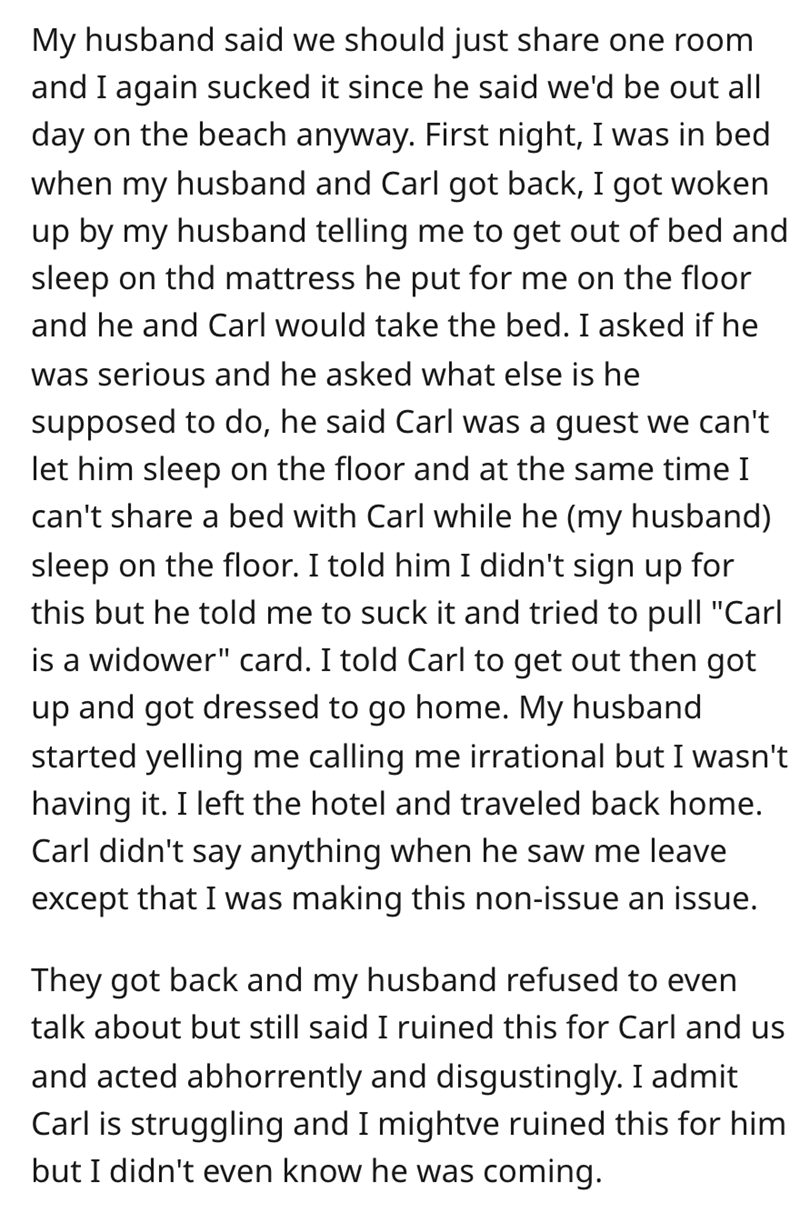 Via u/measures2013
Now she is asking the Reddit community what she did was wrong. Below are the comments by Redditors that you would not want to miss. 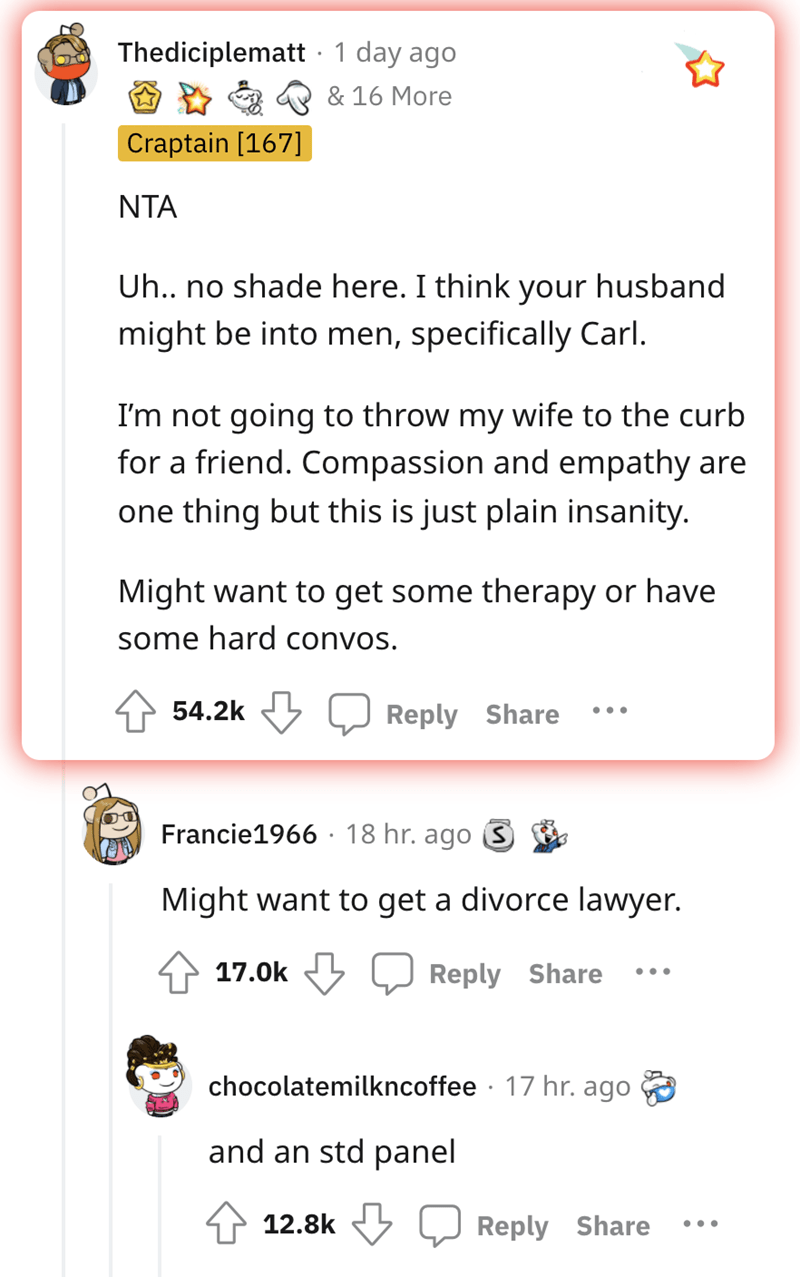 5. OP should see the red flags 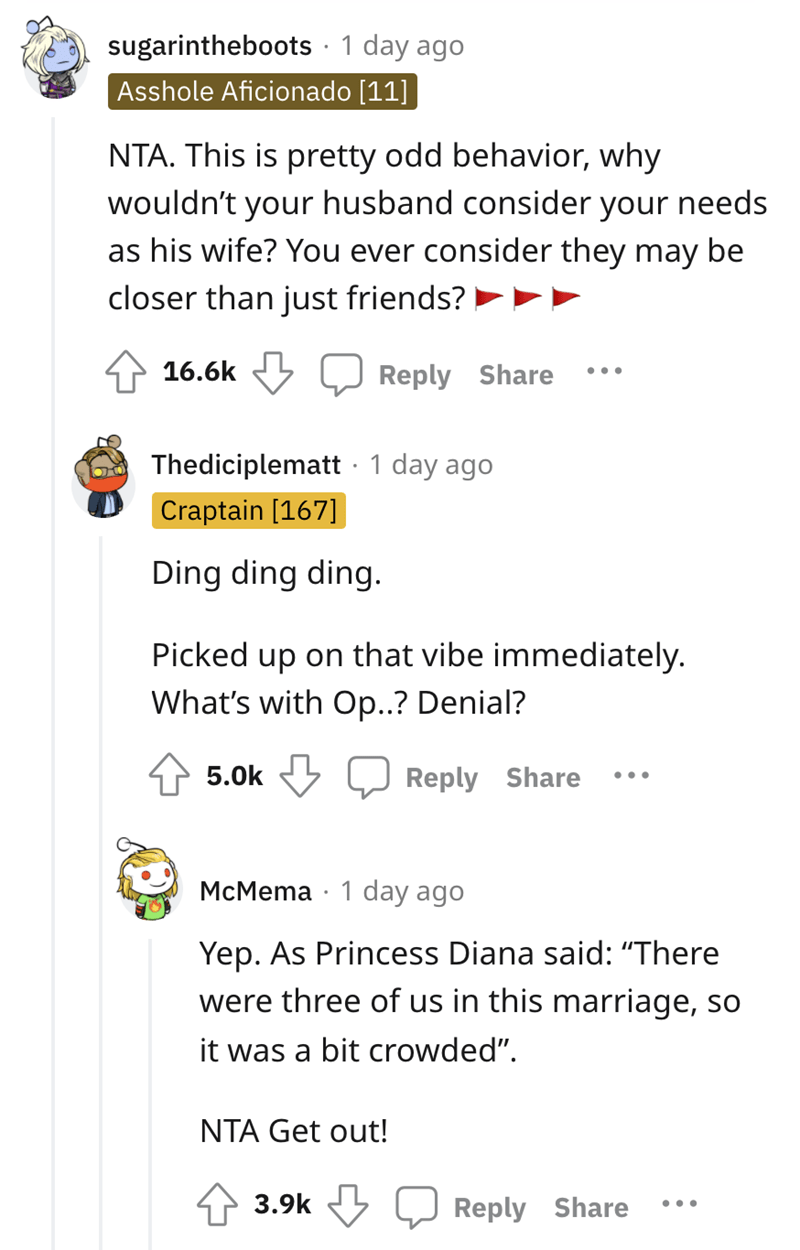 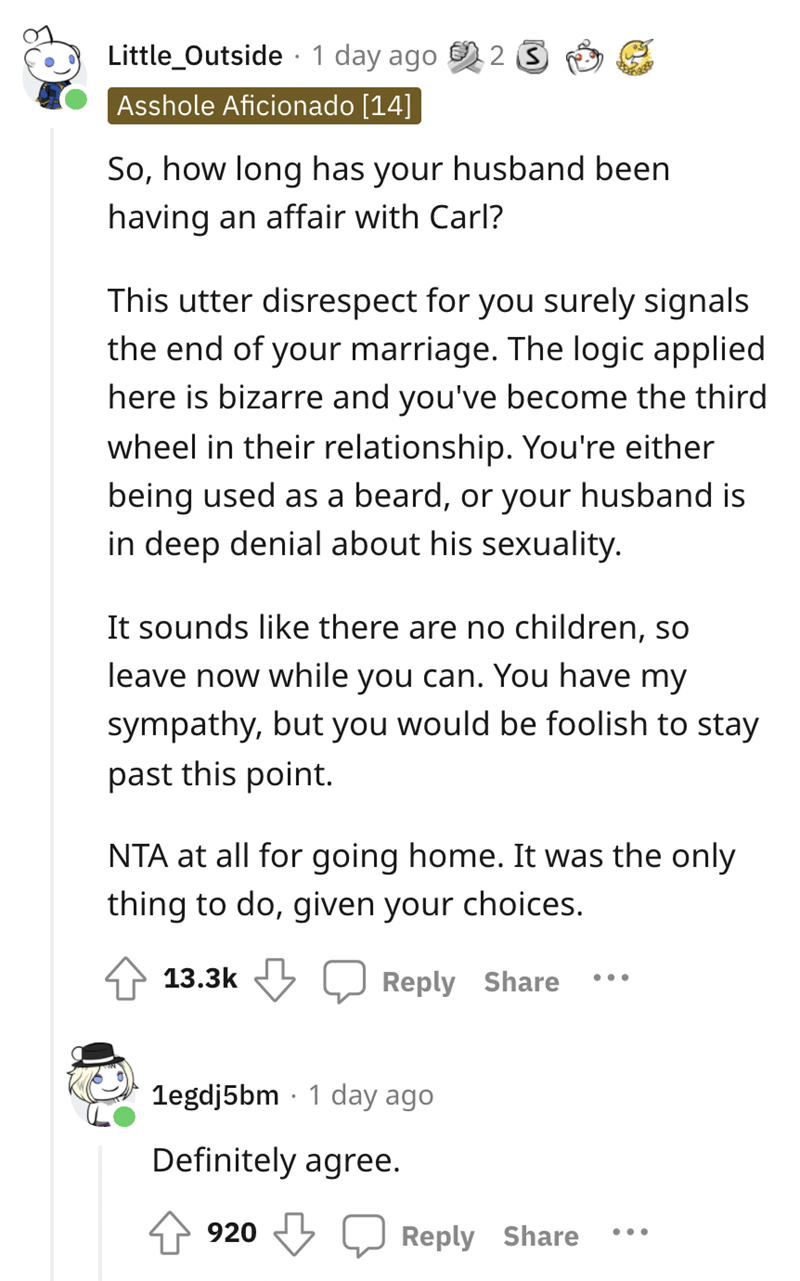 7. Well, we see some type of relevance here; Grace and Frankie 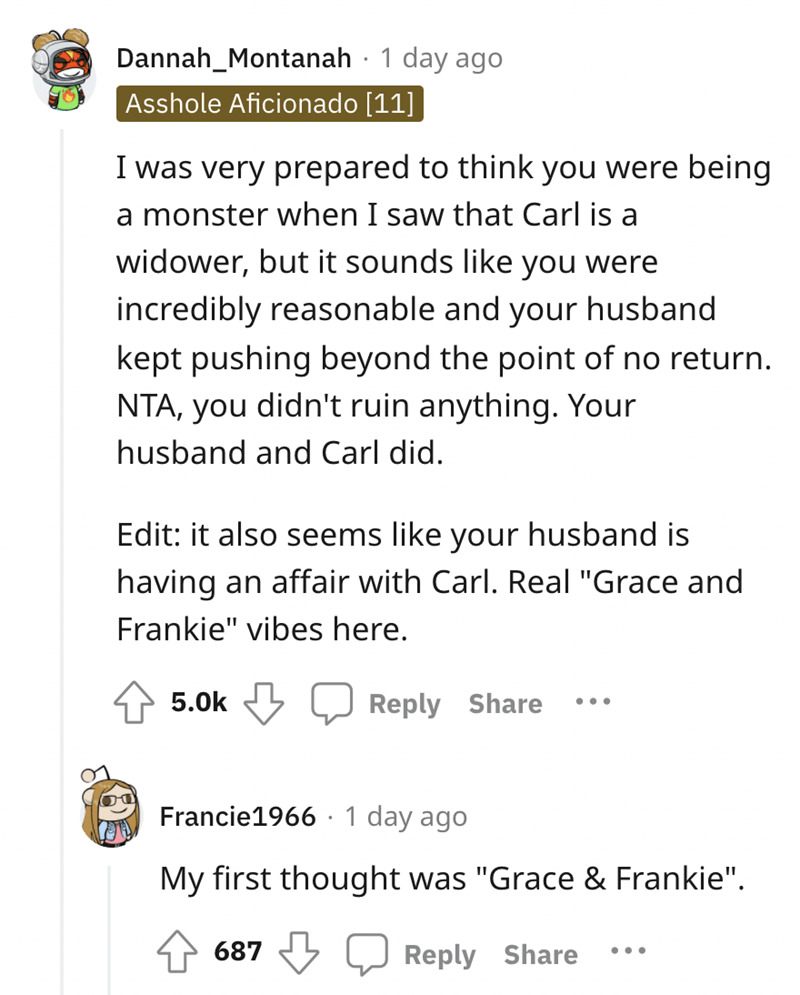 8. So, it has been declared NTA, and this is hilarious 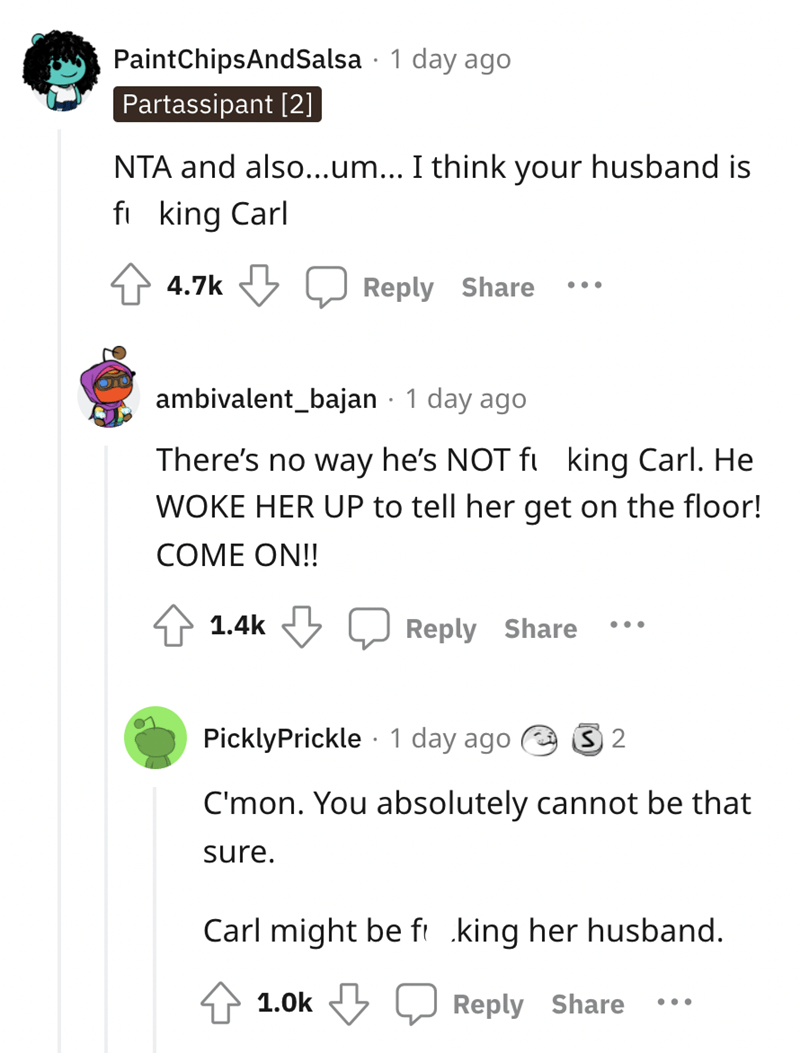 9. It was definitely not a non-issue, the reason they both were denying it was because they are having an affair 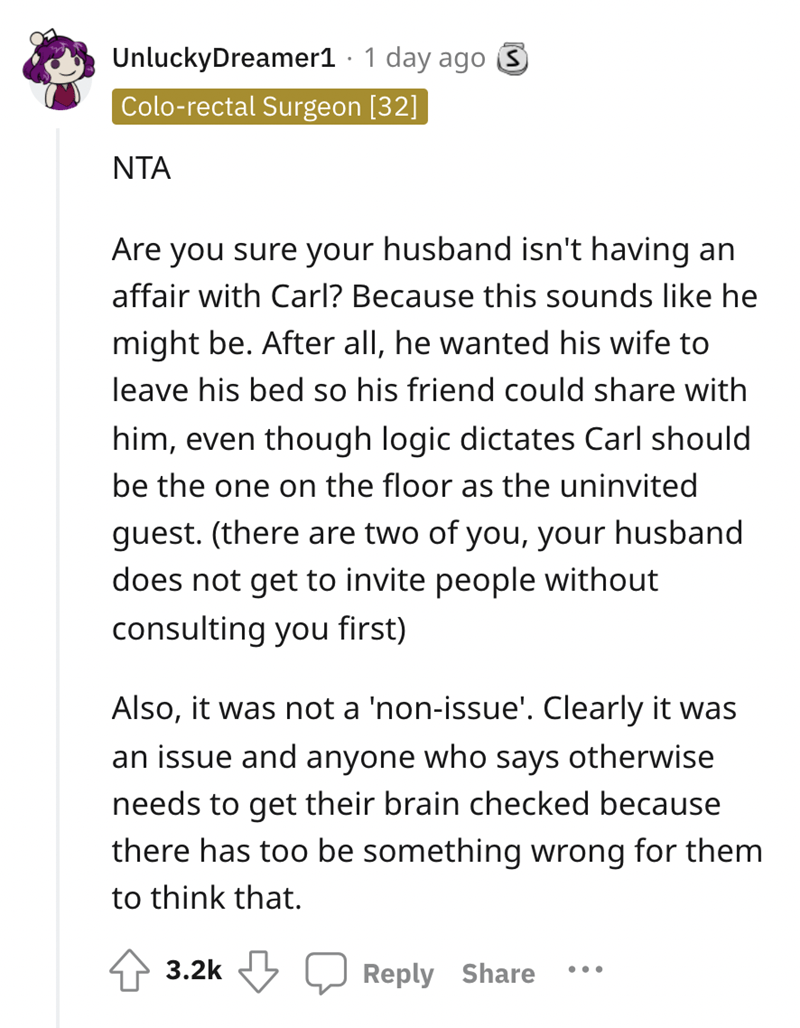 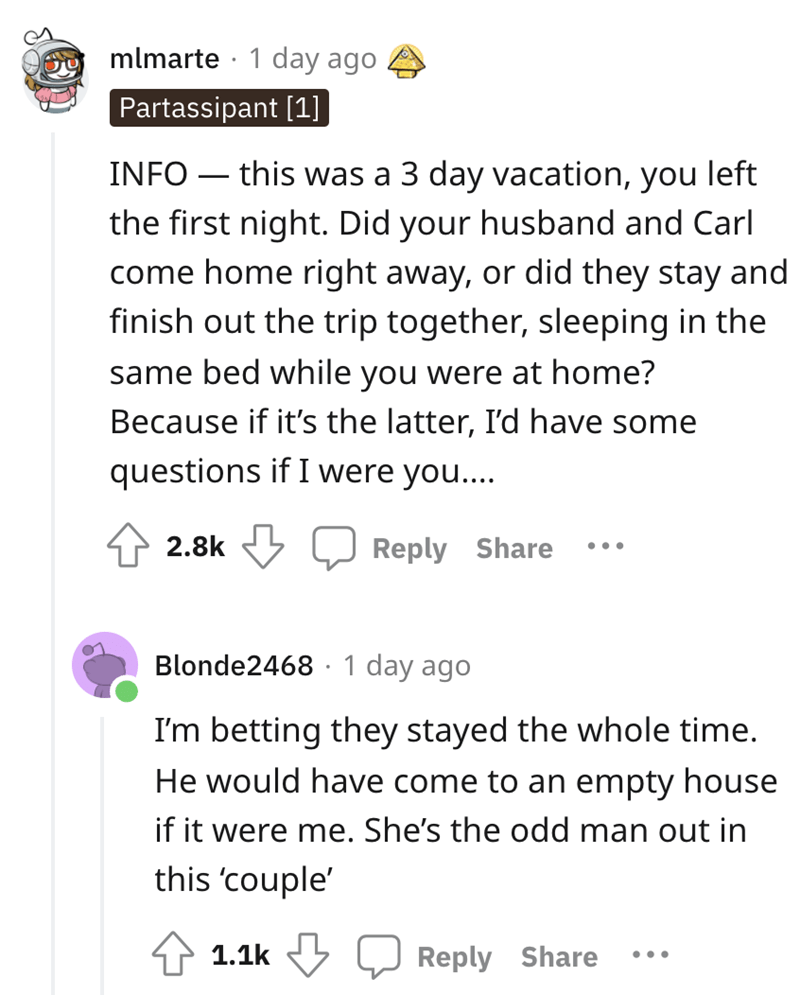 Well, we think that this story is hilarious. the husband did everything rationally and pushed his wife beyond what was supposed to be done. This looks really bad and the only thing we can suggest to OP is to get out of that marriage. Carl and his husband are not “just” friends, there’s something else going on that we all can sense.

Share your thoughts in the comment section down below. We wo’t ask you whether it’s NTA or AITA because that’s already very clear. if you want more entertaining stories to read, stay tuned with us!