Everybody deserves to have their efforts appreciated.

We all know how much praise stay-at-home mothers usually get. After all taking care of a child is never easy and can be considered a full-time job with no vacation time whatsoever. However, what about the stay-at-home fathers? It is the 21st century and it means that females can work while their husbands stay at home to take care of the child. A relationship is a team effort and that includes taking care of a child.

How come stay-at-home fathers don’t get much praise and usually get flack for the weirdest things possible? Even their supposed partners make jokes about how they don’t know how to do anything and they have to work and take care of the house themselves. Many people may say it is only a joke but what if we reverse this and call out a stay-at-home mother? Would we et the same response? I highly doubt it so how is it considered okay when it is a male?

He not only takes care of his daughter but also has a day job.

Being responsible for everything while also taking care of a child is not easy work.

Anyone can get overwhelmed at times but it does not mean your partner can make light of all the hard work one does.

Rather than apologizing, what she did next was even more condescending. 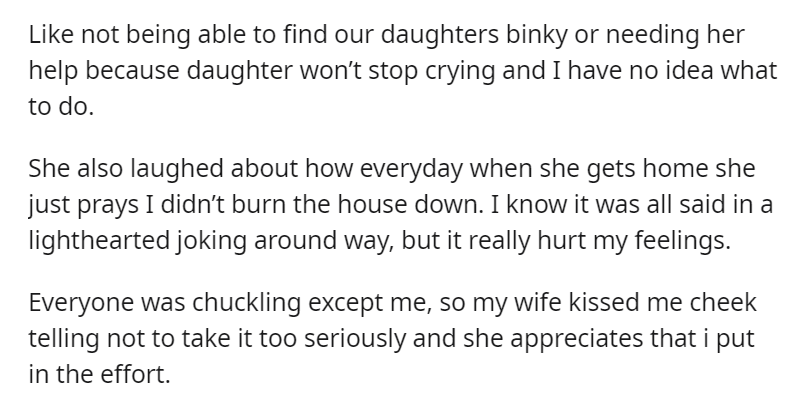 Just because she is well aware that he helps out, why does she have to lie about it to others?

Rather than communicating and work it out, they have been distant from each other since then. 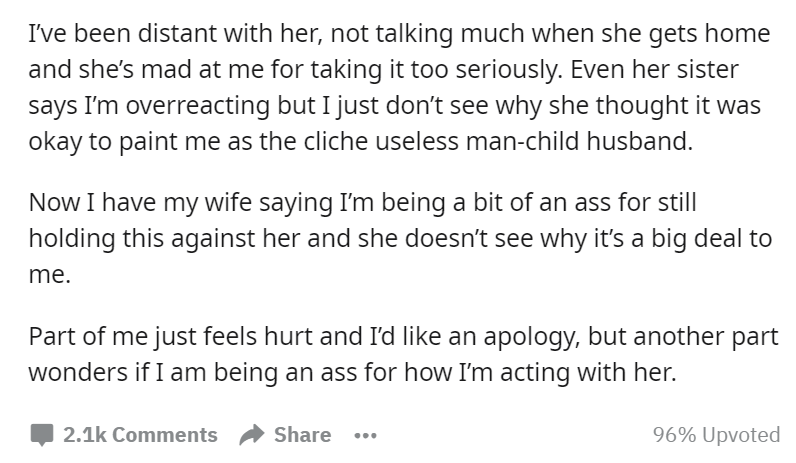 OP, why would you say “she knows I help out a lot”.? You don’t “help out”. You’re a parent who works from home, does the majority of the housework, and solo childcare for what I’m assuming is roughly 40-60 hours per week. That’s not helping out, that’s a full-time parent.

The question is, why does your wife feel it’s okay to downplay your efforts and make jokes about the lifestyle that you both agreed to? Why has she decided that it’s okay? Is it because she underestimates what you do, or wants you to do more because you’re at home, or is it because she feels that she ‘ought to be’ the SAHP and feels guilt that you’re so good at child and home care? Mothers have been socialized to feel guilt for going back to work, maybe by pretending that you’re helpless at home she is mitigating her guilt.

Ask her. “Do I not clean enough around the house?” “Do I call you too frequently while you’re at work?” “Are you truly scared that I’ll burn the house down?” If the answers are yes, then “why did you not communicate that to me privately and respectfully, rather than joking about me in public? Tell me what issues you have and I’ll work on them” If the answers are no, “Then why would you repeatedly imply that I am not coping when you think that I am? I understand that you love me and didn’t intend to upset me but I need to know why you thought those jokes were funny.” 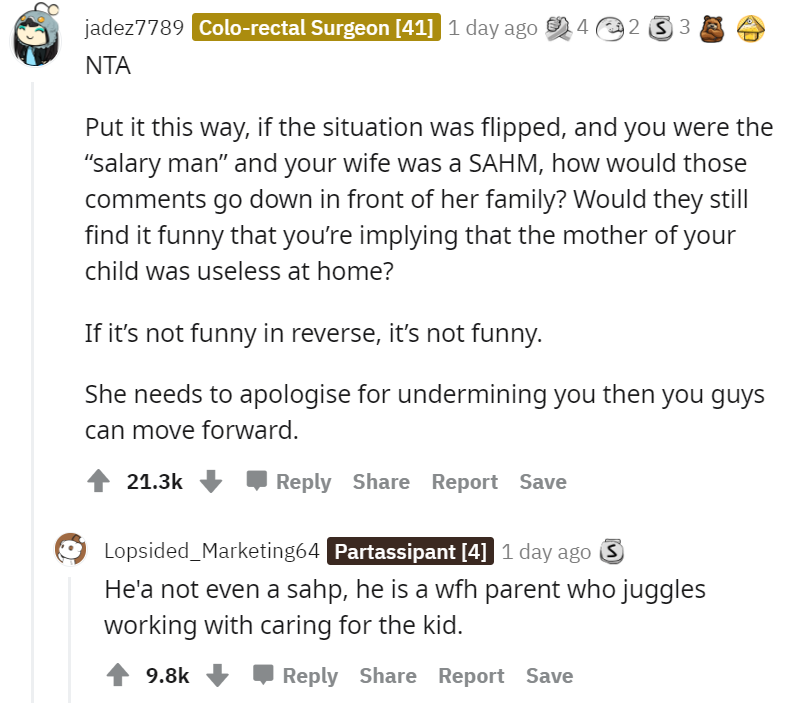 A relationship is a partnership, so both parties should support each other, not put the other person down. 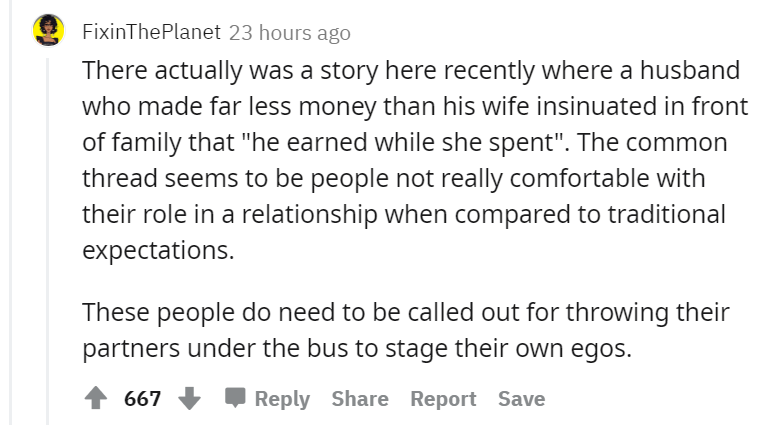 Rather than letting these sorts of things simmer on their own, it is better to clear things with your partner. 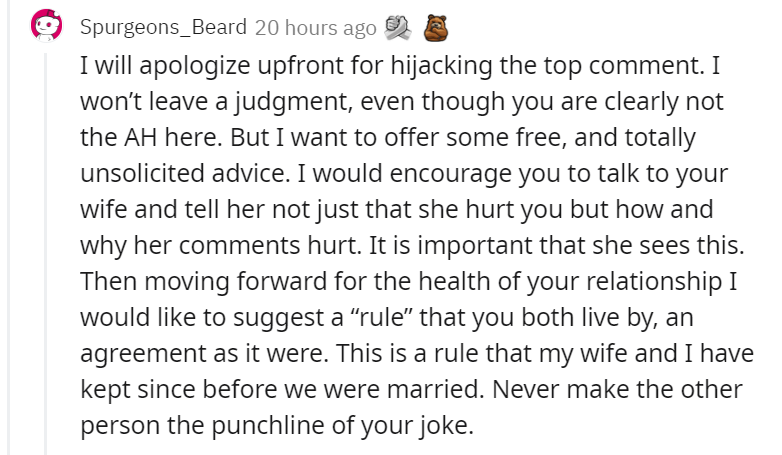 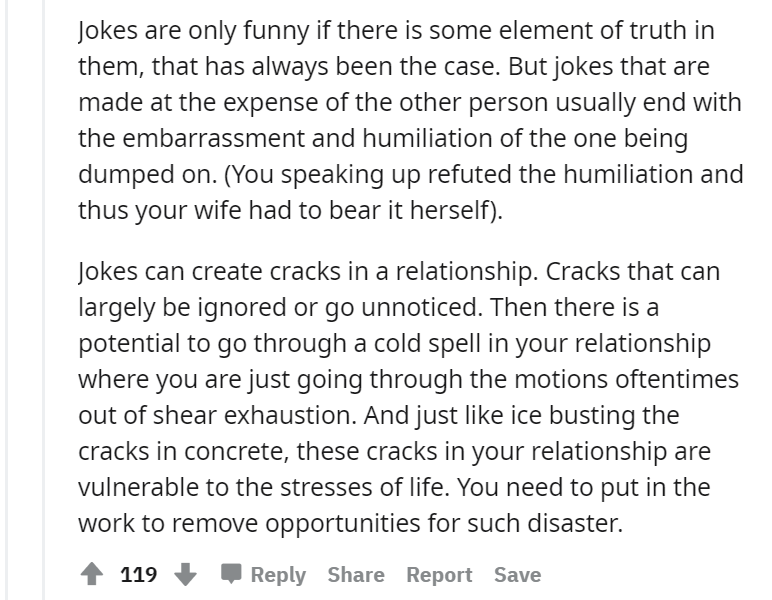 Some people even chimed in with their own experiences of dealing with a similar situation. 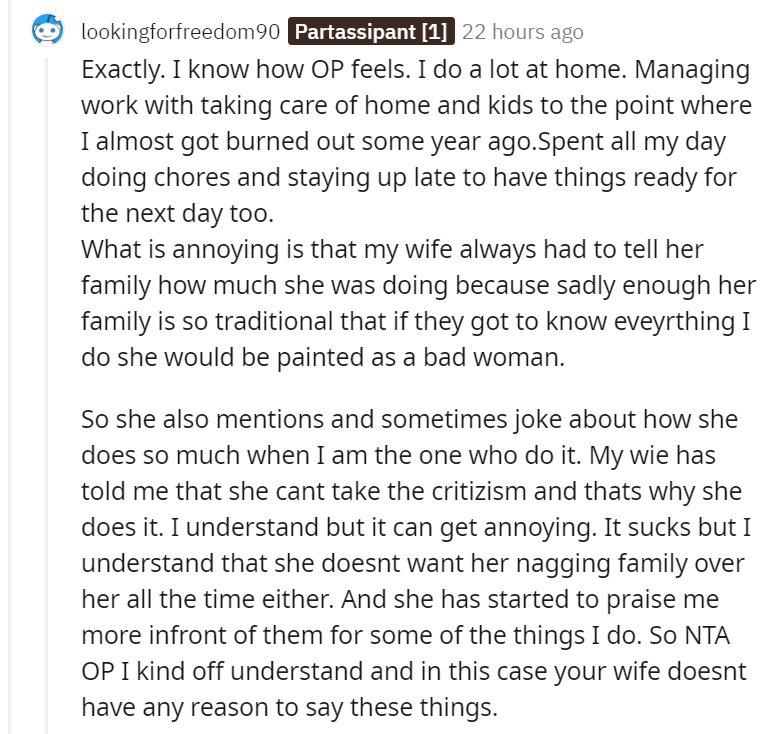 Just be thankful that your partner doesn’t slack off, whether they are male or female. 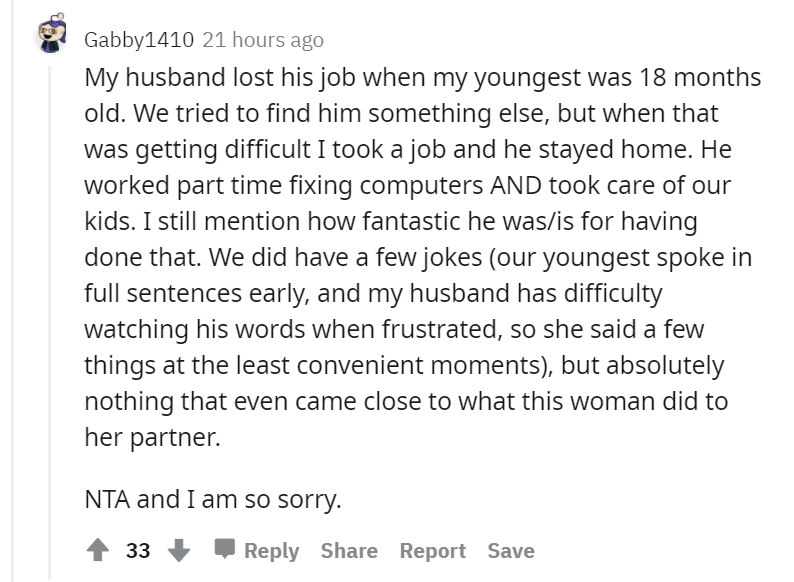 He does sound like a good father and his wife needs to acknowledge that. 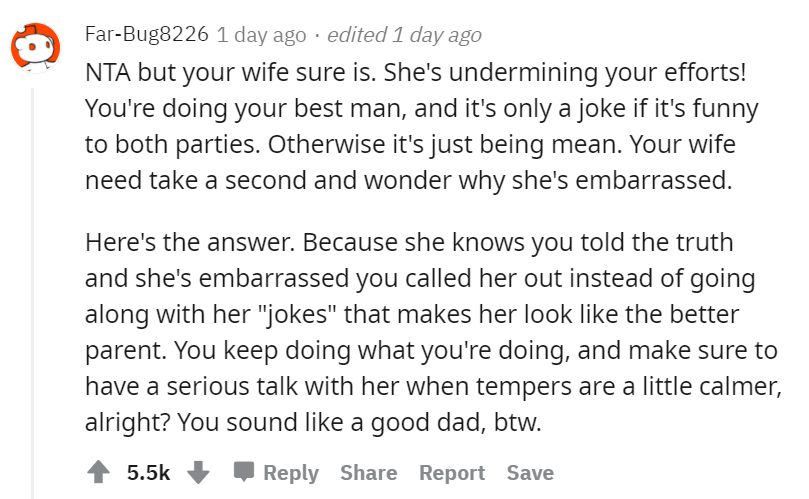 Just because she is self-conscious does not give her the right to put her husband down. 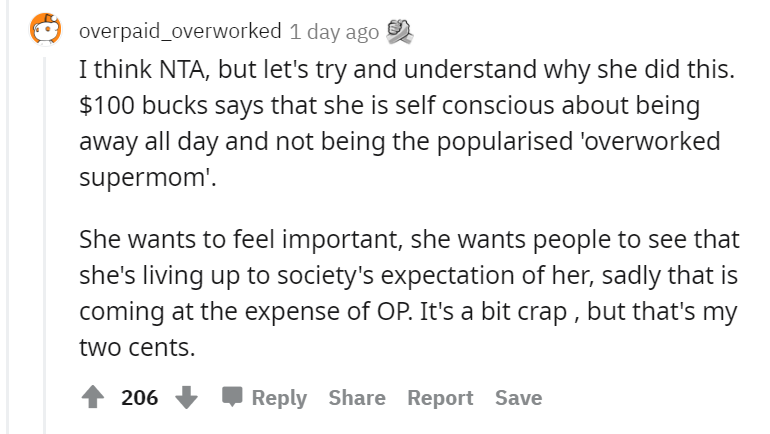 I agree NTA but I think she DOES know how much work it is. I think that’s why she made the jokes. So often we see women feeling guilty for not filling that traditional full-time caretaker role. I think she might have been insecure in front of her family, to admit her husband was doing so much of the work while she was away from the family. (Absolutely nothing wrong with her working away from the kids!)

I feel like her “jokes” were just overcompensating for her feelings that her family might be judgmental about their non-standard parenting roles, so she wanted to paint herself as super important to running the day-to-day household.

Still was a sh*tty thing to do, of course. –aquariummmm

The best and the only solution is to communicate with her before things get worse. 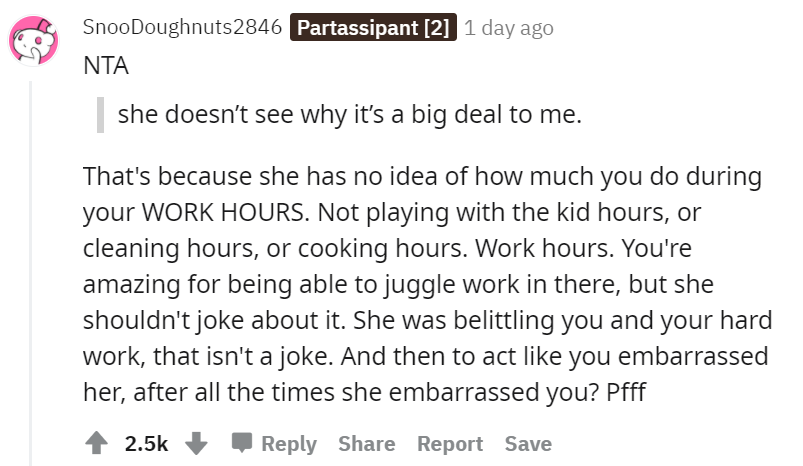 Have you ever dealt with a similar situation? If so how did you resolve it? Voice your opinion in the comments below.