Meeting someone who you feel to be the perfect match for you, sure is a blessing! This bond becomes even more precious if your partner understands you and cares for you. Real loyalty is when each of the partners pays attention to making the present better rather than pointing out each other’s past, that’s just something ridiculous to do. Accepting each other with all the imperfections is what true love is. There’s nothing such as a perfect relationship, however lifting each other up, forgiveness, and compromise leads to a smooth relationship for sure. When you love somebody, you naturally start to own everything that comes with him/her, even their family.

However, no one I repeat no one has the right to define your relationship or ridicule you for any reason at all not even the family of your partner. There are some ethical limits that need to be respected by both parties. Below is an AITA post where the narrator had fallen in love with a decent guy who didn’t really have any concern with her past, he respected her for all the right reasons. However, her fiance’s family being nosy enough, made sure to bring up her past every now and then. OP kept tolerating this disgusting behavior until one day when her FIL crossed his limits and ridiculed her by joking about her past in the middle of a family gathering. This post clearly tells how frustrated and furious she became, and here’s what she did, we are so proud of her!

1. Your past doesn’t define you, for sure! 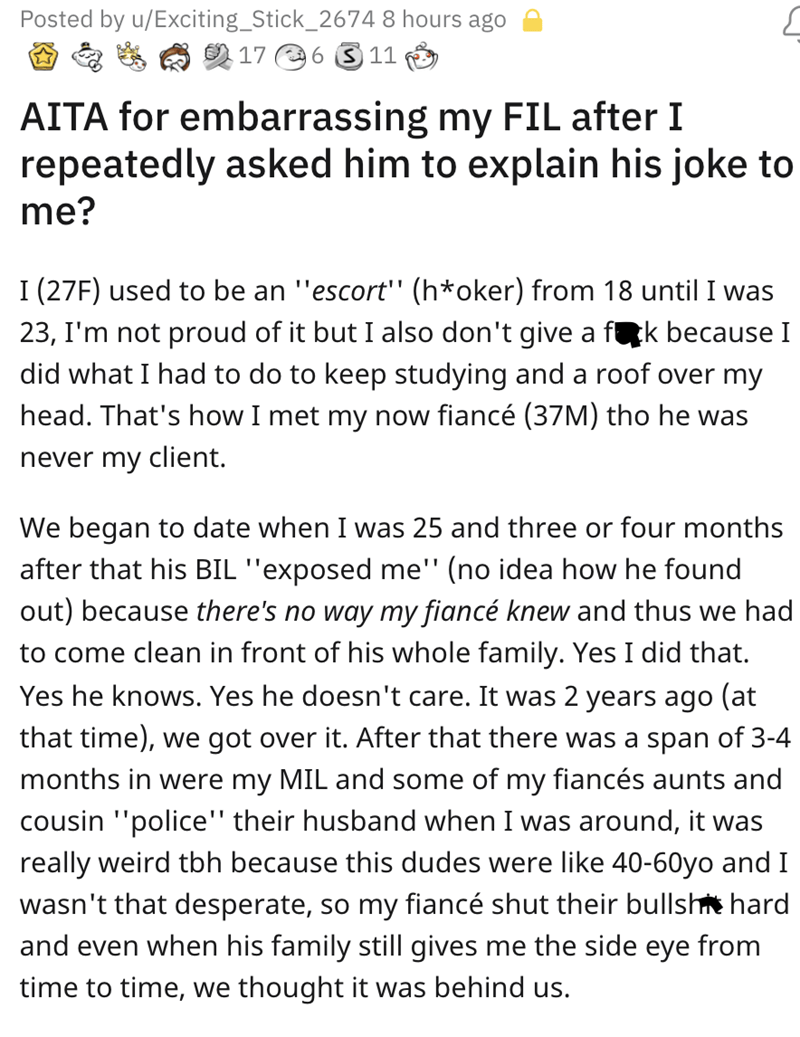 Tbh all the aunts need to get a life for being so insecure. If they are so shaky about their trust in their husbands, they should seriously reconsider their marriage. OP doesn’t deserve such behavior, especially now that she is leading a stable life with her fiance, who seems to be very happy being with her.

2. Wow! The audacity and indecency shown by the FIL were ridiculous! 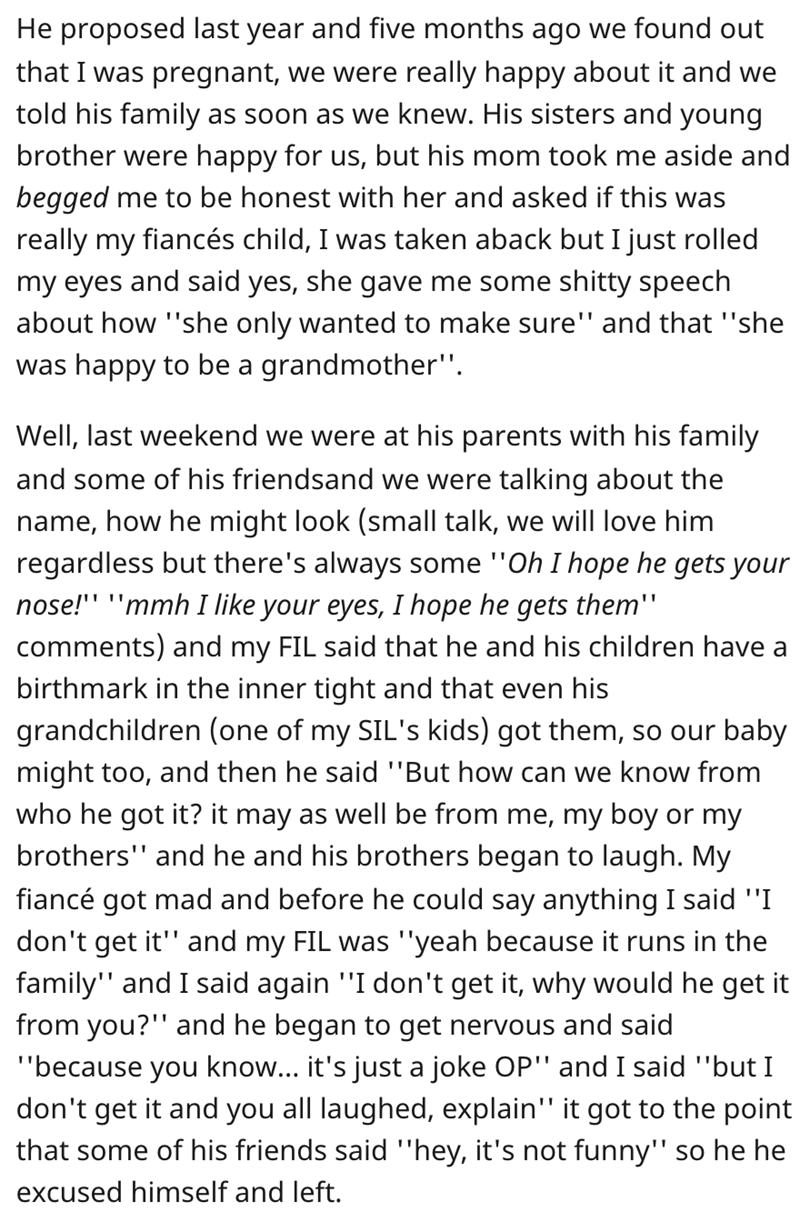 Well, it’s pretty clear who needs to be ‘POLICED’ for his intentions about you girl! You did what you had to, he deserves to be taught a lesson for publically embarrassing you and letting your spirits down.

You reap what you sow! Your FIL reaped what he sow. You owe an apology from your FIL and everyone who laughed at the absurd joke. I hope your baby adopts nothing from him, not the birthmark, not that pathetic sense of humor, and above all, I hope it remains safe from all his creepiness. 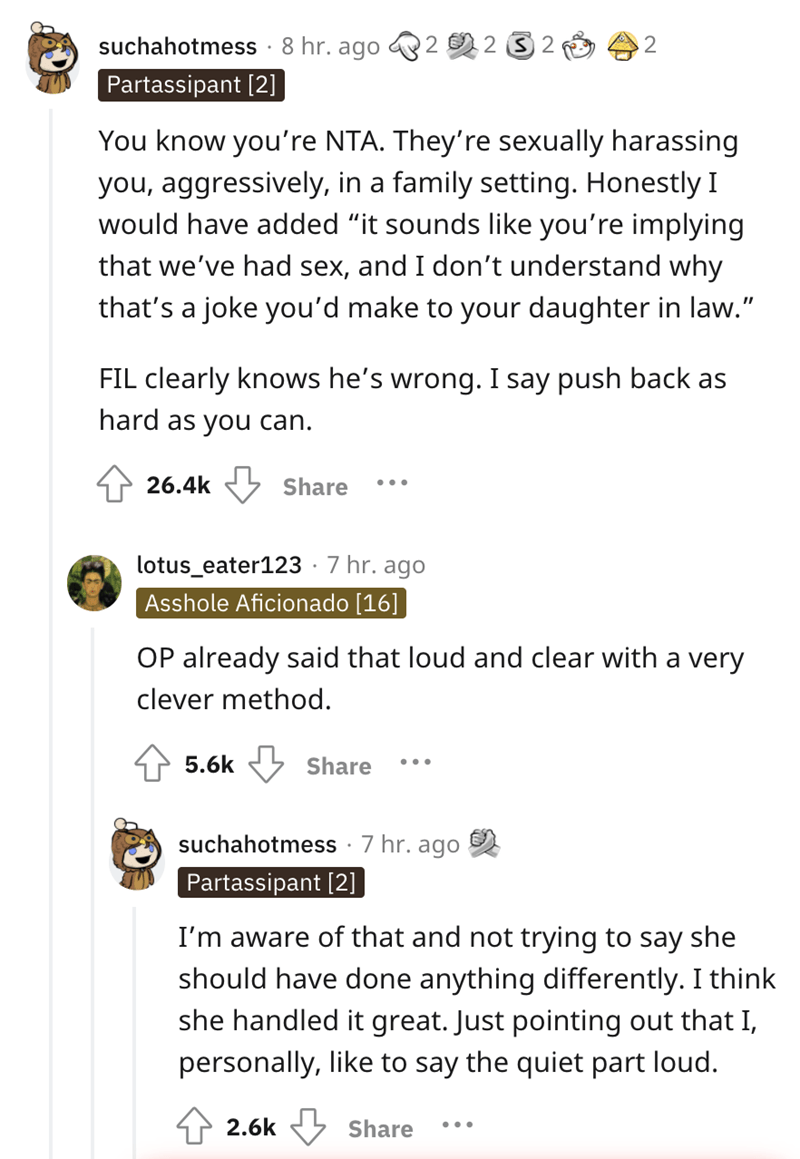 They stand by you and your stance! The FIL should have known his limits. Him being an old man, should have rethought twice before uttering those words, that too for his DIL 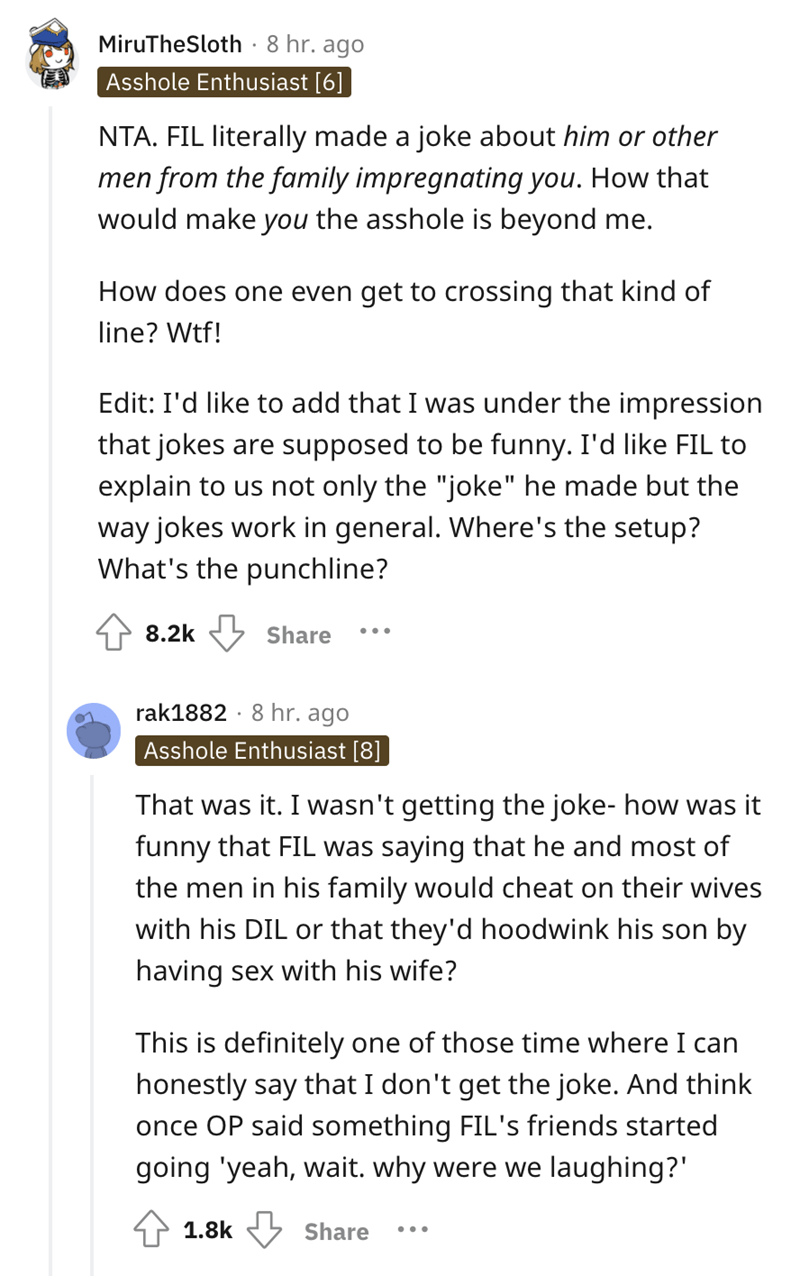 The rest of the people should have thought, is it even funny?

The BIL’s audacity to ask for an apology 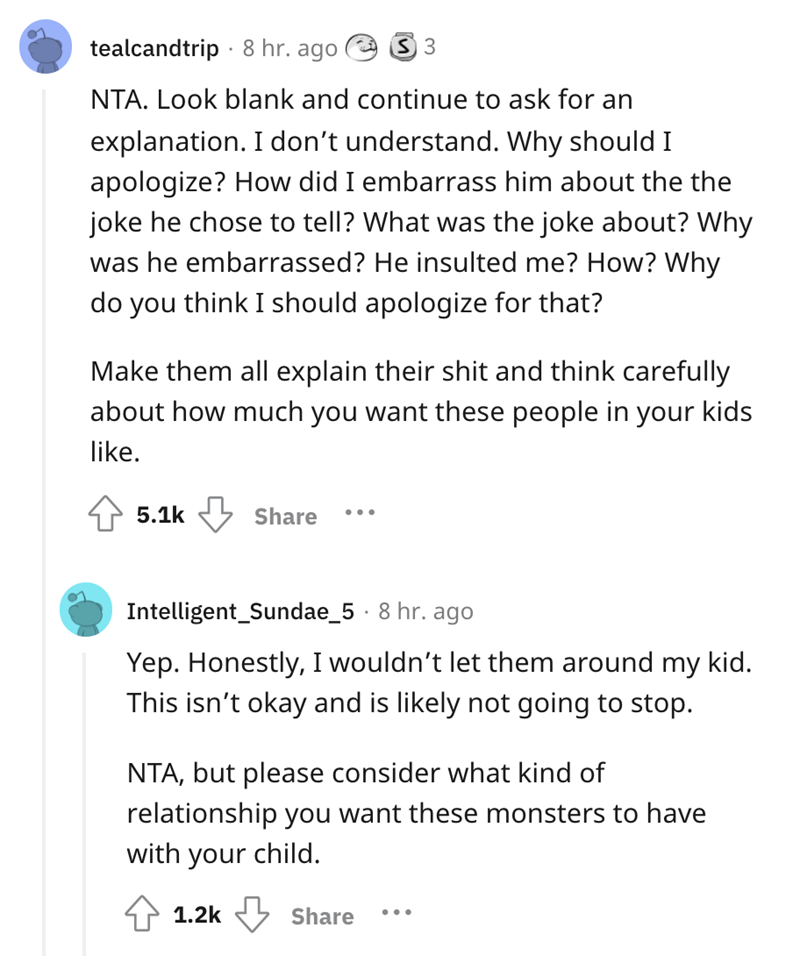 The point needs serious attention. Would you want your child to grow under such an influence, who does not hold any respect for his mother? Above all, you’d want your child to call that man his Grandpa, a man who doesn’t even know every person alive, has self-respect that can’t be attacked at any cost. By all means, you have the authority to make the decision!

Reconsider calling it a family 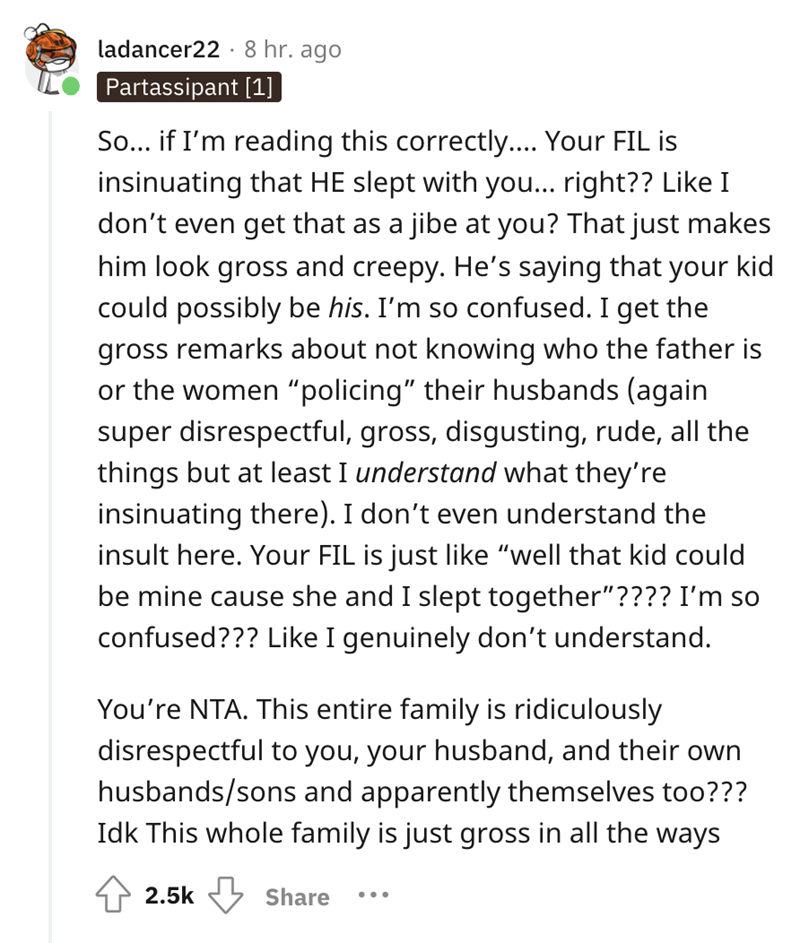 It’s clear who TA is, the culprit left out of guilt 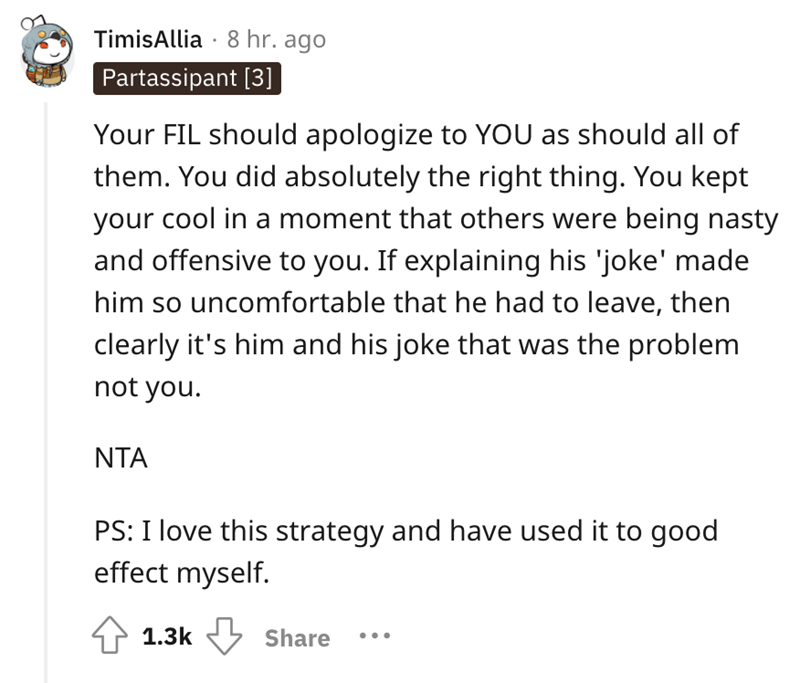 We’re impressed by how OP managed to unmask the nasty side of the FIL. He made a mark by leaving, he made it clear what wrong he had caused and how had made the most indecent comment about his son’s wife. Such people need to be shut out right away as she did. Nobody had the right to take OP’s silence and tolerance for granted!

Let us know your thoughts about the FIL giving such insensitive remarks, in the comment section