Did this woman think there is only one dog in the world?

I get that dogs are great and sometimes you can’t help but care for a dog that isn’t yours, but that doesn’t mean you can ask that person if they will let you buy the dog. However, that is exactly what happened in this particular story. You see, this woman thought it was a good idea to ask her sister in la to sell her family dog after taking care of the doggo for a few hours. Not only is it disrespectful but it is also quite weird to ask that.

In my opinion, this is peak Karen behaviour and nobody can convince me otherwise. There is also something deeper going on here. The sister in law is saying that she only wants the dog because she cares for him but I feel like there are a lot of things unsaid here. You can form your own opinion if you just scroll below and take a look for yourself.

I already know that the answer to this question is a definite no.

So the story starts with this woman not being able to spend a lot of time with her dog because she is pregnant.

So she decided to let her sister-in-law take care of the dog for a few hours but it was clear that the woman had other intentions.

Without missing a beat, this woman asked the family to sell their dog to her and her argument was quite dumb, to say the least.

They said no right out but the sister in law wasn’t letting up.

Even if the sister in law can’t have kids, that doesn’t give her any special rights when it comes to the dog.

Not only that but the woman kept coming up with excuses so she could keep the dog longer.

I understand that the sister-in-law can’t have kids but does that give her the right to ask this family to sell their dogs to them? And her argument that they are having a kid so they don’t need a dog is quite dumb. Has she never heard of family pets? And if she really wants a dog, she can go to a shelter and get a dog. It really isn’t that hard and there are so many dogs who need a loving family so what she is trying to do here is just to make this woman feel bad and that is about it.

As you can expect, nobody was on the side of the sister-in-law. 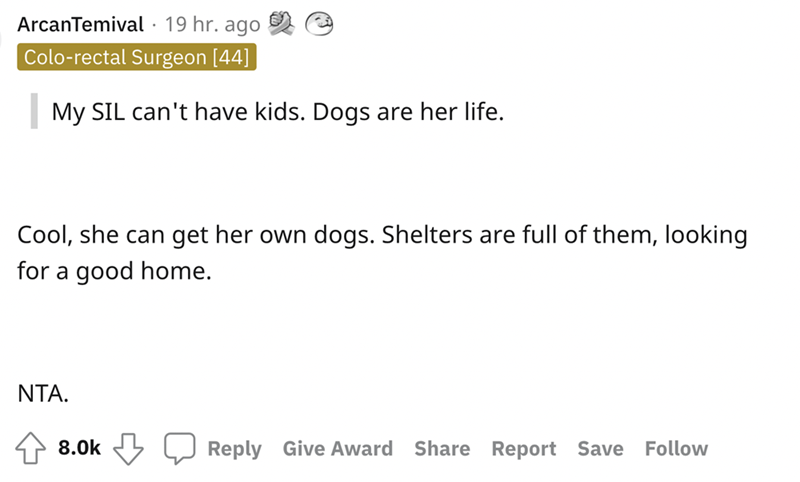 If she wants a dog, she can get one.

But she seems to be quite focused on the sister-in-law’s dog.

This person clearly has the right idea.

But she is a Karen so what else could we expect?

What are your thoughts on this Do you think the sister-in-law had the right to ask them to sell the dog or is she trying to guilt-trip them? Comment down below and let us know.