Dogs are not for everyone.

I know dog lovers get very angry when someone says anything bad about dogs but the truth is that not everyone is the biggest fan of dogs. That doesn’t make them any less adorable and loyal but it also doesn’t make the people who don’t like dogs horrible. Everyone has their reasons and there doesn’t even have to be a reason as long as the person isn’t cruel to animals. However, some people don’t understand this and will try to change your mind about a particular animal by forcing their pet on you.

Now, not only is this wrong but there is also the fact that many people don’t even know to train their dogs. I mean, if you have decided to adopt a dog, it is necessary for a person to train them especially if that dog is going to be interacting with strangers. This story shines a little bit of light on this problem. I mean the woman clearly doesn’t hate dogs but she is also not the biggest fan of them, especially untrained ones. So she has a right to set some boundaries but her boyfriend is having none of it.

You can read the full story for yourself by scrolling below.

The title sounds bad but just give it a chance, the story is not what it seems.

She just never wanted a dog in her life and that is completely normal.

But her boyfriend inherited a dog and she was basically fine with it as long as they followed some rules.

However, it is clear that the dog is untrained and the boyfriend doesn’t care about the rules.

The doggo needs some help but rather than training her, the guy is basically enabling her.

This may sound harsh but some people just don’t have the time to play with an animal.

Things had clearly not been alright for a significant amount of time but it all came to a head one day.

She called him out directly which made him silent.

The fight didn’t end there as the dog kept jumping on her when she got in the car.

This is when the guy responded with ‘just a dog’ argument.

She also goes into more detail as to why she doesn’t want the dog hair getting on her scrubs.

And her hospital doesn’t have a locker so she has to change at home.

I know the Internet is filled with people who absolutely adore dogs so it is no surprise that some people in the commenters didn’t like her at all but at the end of the day, it is her choice. And everyone has boundaries. For example, one person may love spiders and has them as pets but the other is afraid of them, are you going to call that person out to for being afraid of spiders? Everyone is different and not everyone wants to have a pet. Rather than forcing anything on them, just let them be.

People in the comments were mostly by her side in this debate. 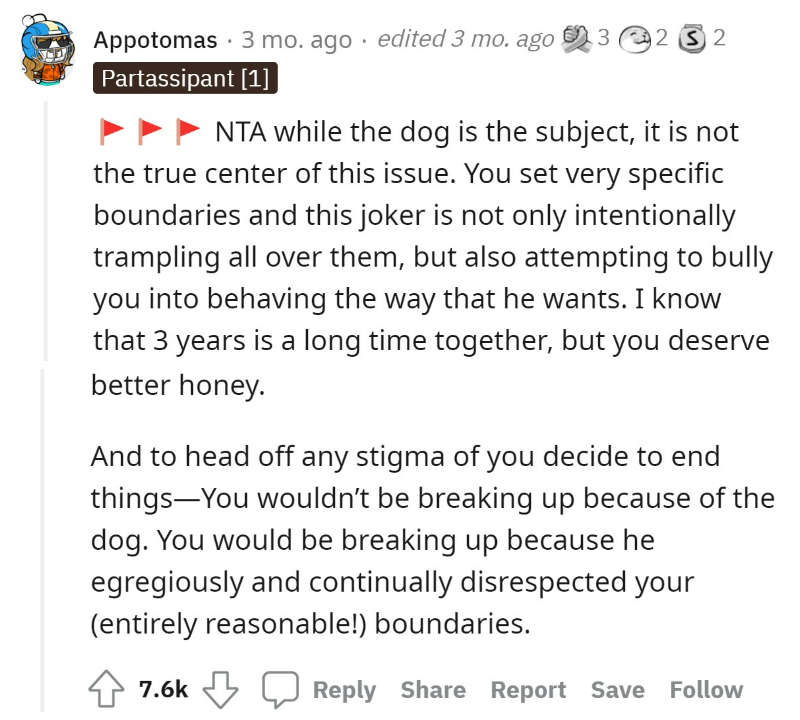 Some people also advised her to look at the relationship from a birds-eye view.

At the end of the day, it is not about the dog.

The guy just doesn’t care about the boundaries she has set which is never a good sign.

He needs to get a hold of himself and look at his behavior.

It seems that he is acting like a bratty child who isn’t getting his way.

This is a red flag if I have ever seen one.

She needs to have a clear and long discussion with her boyfriend. 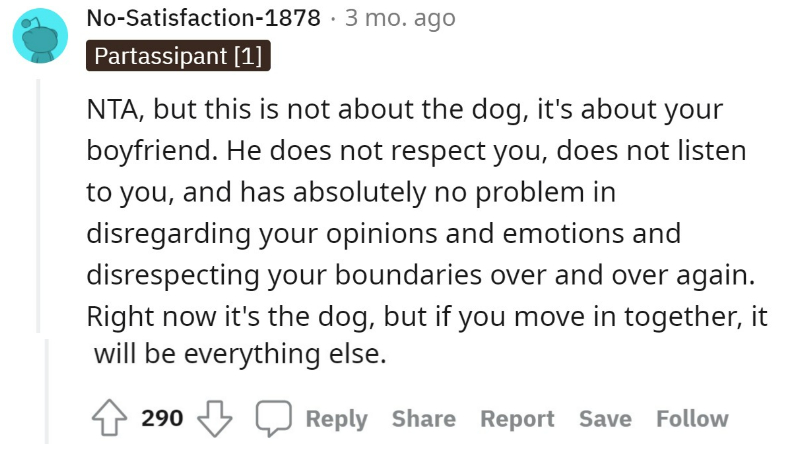