The Original Poster reveals that her family does not reside in the United States, and that it is quite hot right now, so all the relatives prefer to meet at their grandparents’ place, which has a huge pool that is ideal for swimming in hot weather. All the younger generations need to do is cook some food, purchase some snacks, prepare everything, and clean up. 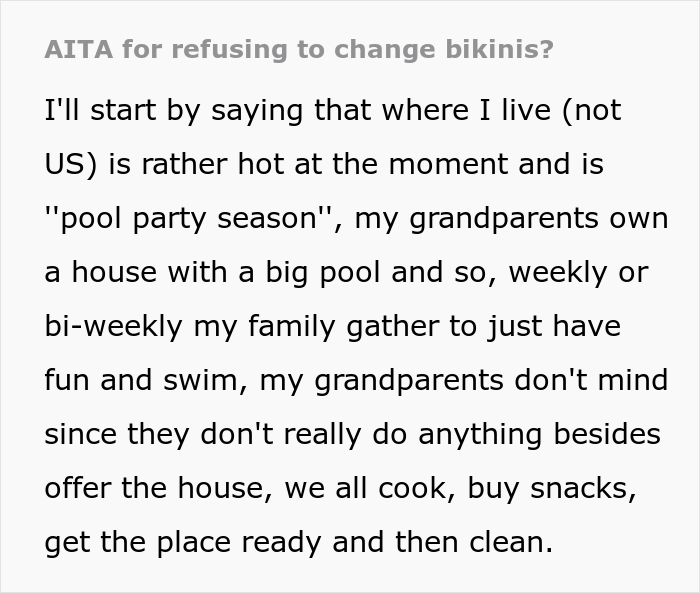 Despite being exes, OP and her ex do not usually interact at family gatherings.

This event occurred on one of those days when a huge family group was gathered by the pool. The OP claims that her sister married one of her ex-boyfriends (let’s call him Jack) two years ago. We must agree that the OP was surprised by this news, but nothing bad happened, and her sister was already 26 weeks pregnant at the time of the events mentioned. 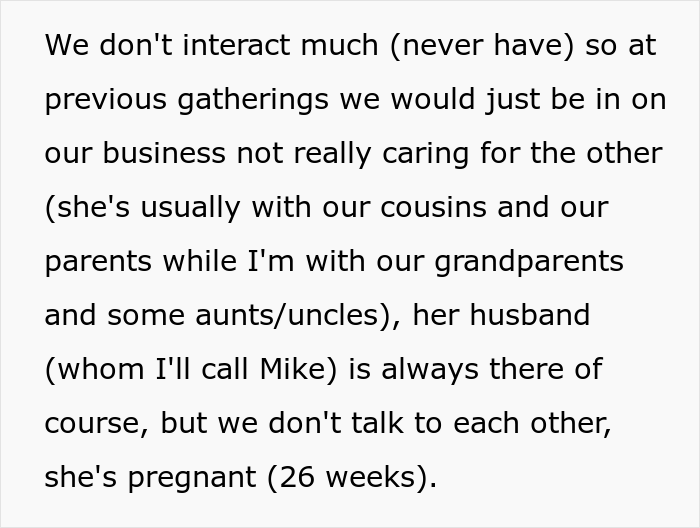 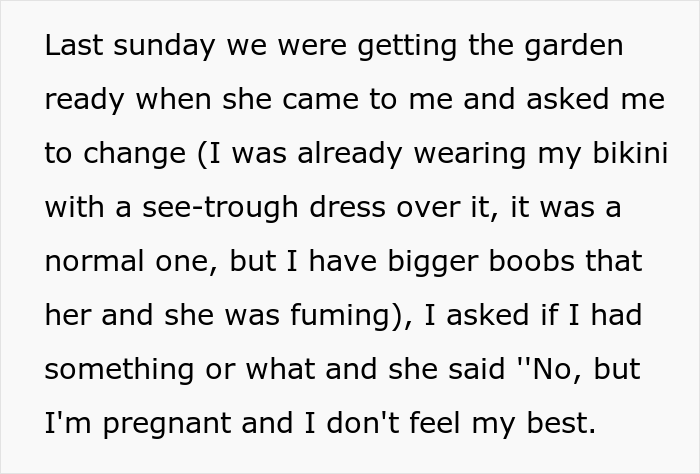 According to the OP, her sister approached her at one point and urged her to change the bikini she was wearing under a revealing dress. The woman mentioned that the OP was attempting to grab Mike’s attention, which she obviously did not enjoy. 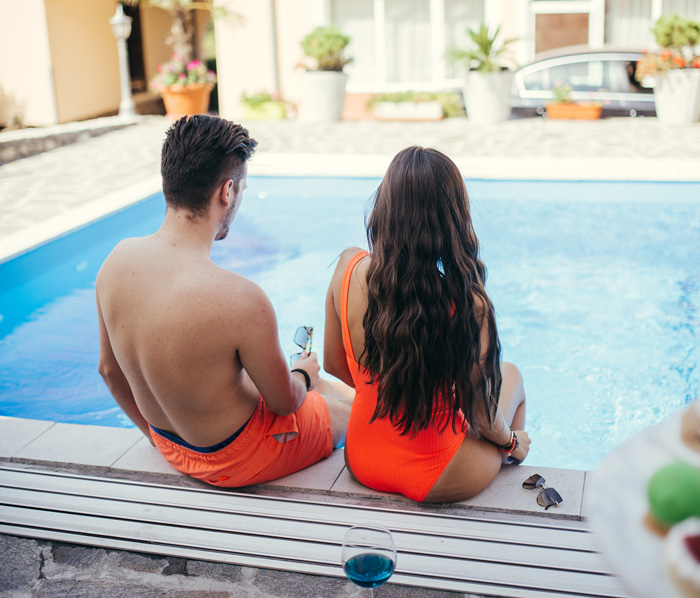 OP’s sister asks her to go change her bikini and OP refused on her face.

Certainly, she didn’t have anything like that on her mind, according to the OP, especially because she and Mike hadn’t spoken much all day, and even at that point, he was playing with one of her cousins and wasn’t showing interest in her. But the sister had already shown to be unstoppable… The OP asked her not to worry, which offended her even more. 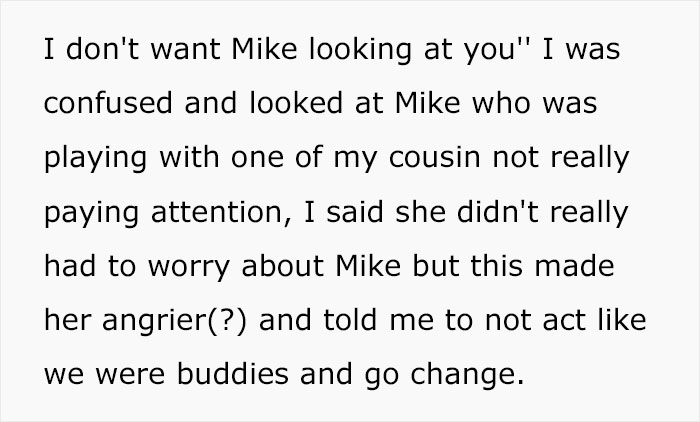 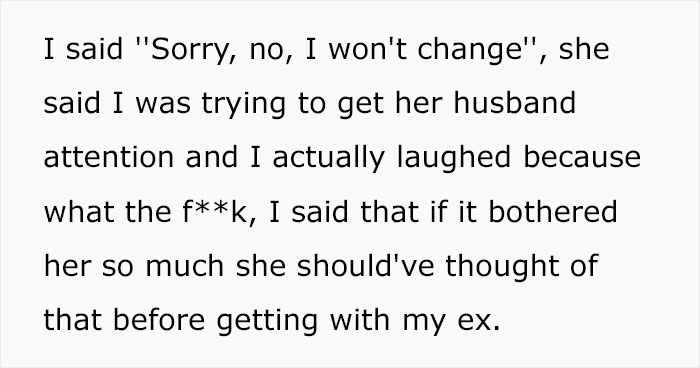 The sisters got into an argument but the grandpa got involved and stopped them.

The elder gentleman asked the OP to apologise for arguing with her sister, but also agreed that the OP should not change her clothes. True, after a time, the mother of both ladies came to the OP and told her to change into another bikini. 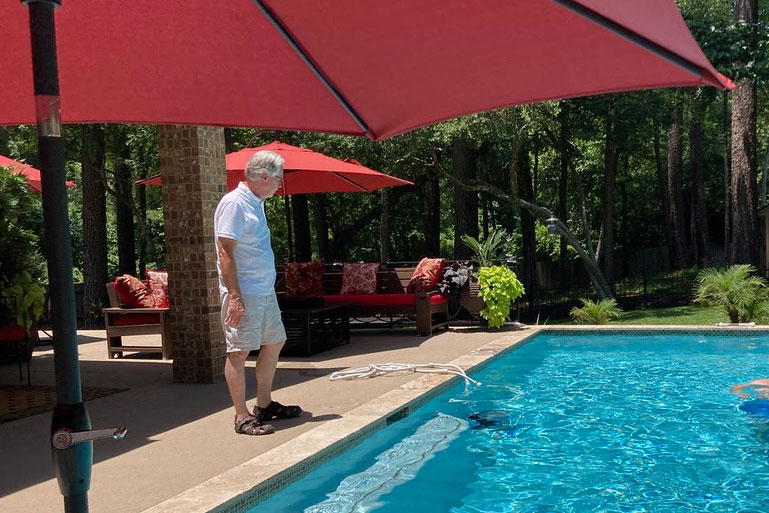 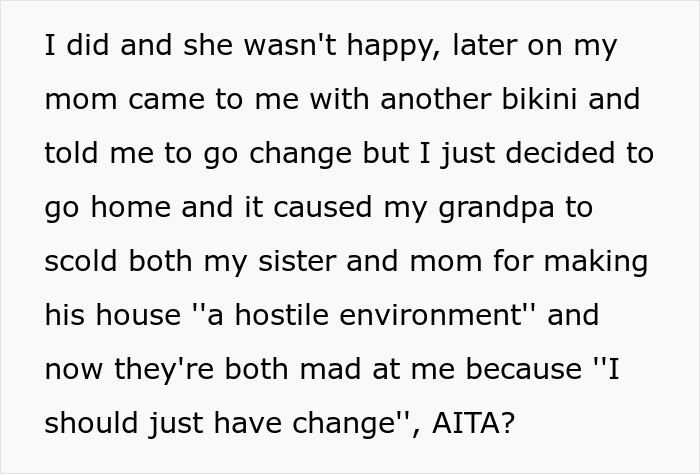 The OP had had enough of this situation and decided to return home.

In reply, the woman simply stated that she’d had enough and was leaving. The grandfather was furious and rebuked his daughter and granddaughter for making his home a “hostile atmosphere.” True, the OP is now unhappy because her mother and sister are upset with her.

People in the comments, on the other hand, were overwhelmingly supportive of the OP and her grandfather, as the OP’s sister’s self-doubt is not really her concern. The OP did nothing wrong, according to the commentators; she really wore a bikini to the pool party, and her unwillingness to change clothing was completely acceptable. Many respondents indicated they would do the same thing. 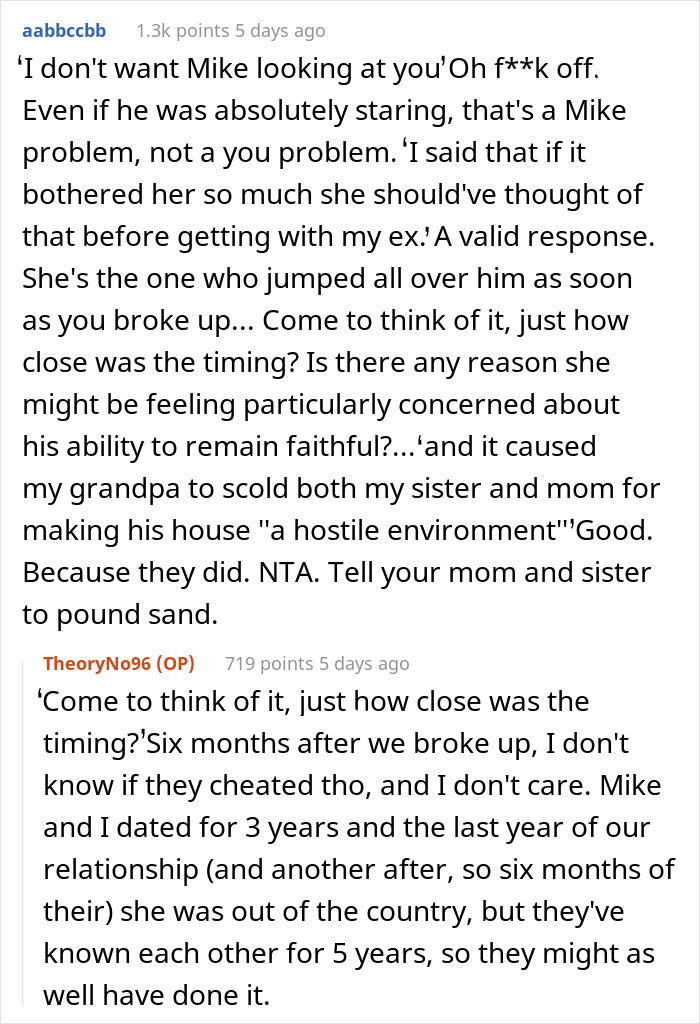 Was it sister’s hormones or insecurity…? 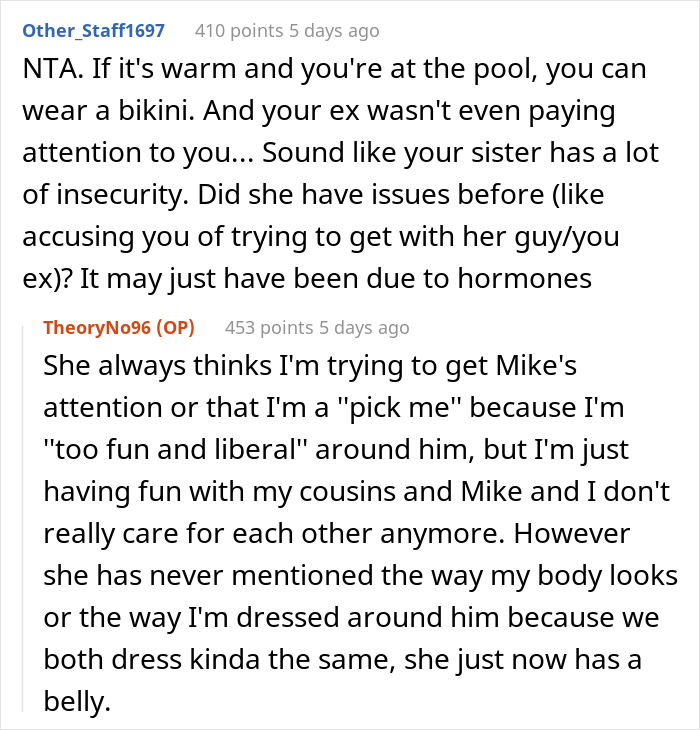 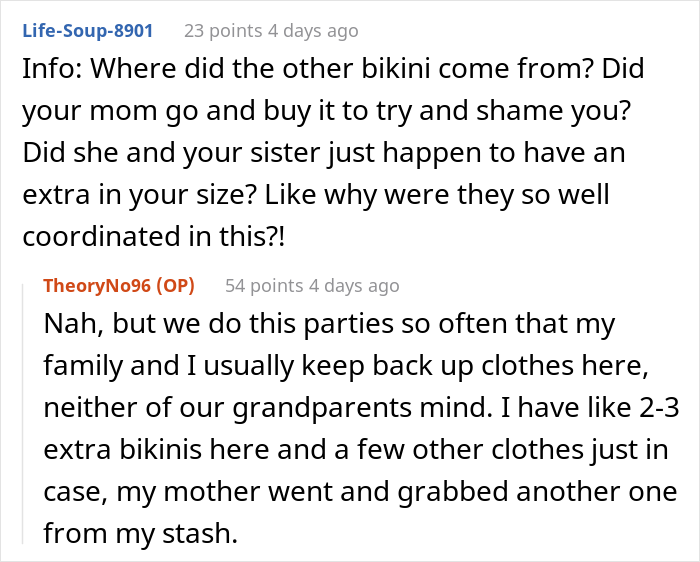 Grandpa is the hero! 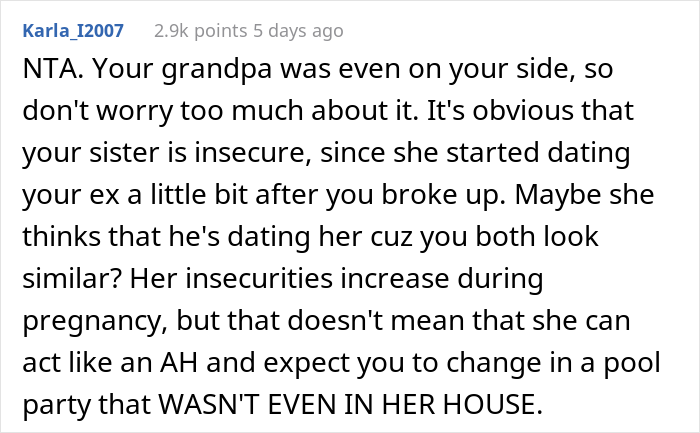 Another group of readers believes the OP’s sister just does not trust her own spouse and is insecure about her own physique as a result of the pregnancy. Many believe that if your partner’s gaze drawn to another person bothers you,  then you are the problem. 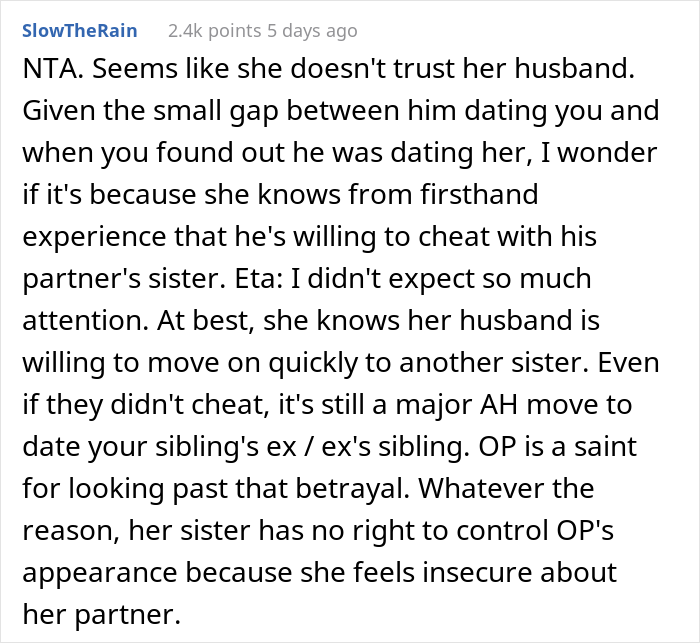 Grandparents are the sweetest, arent they? 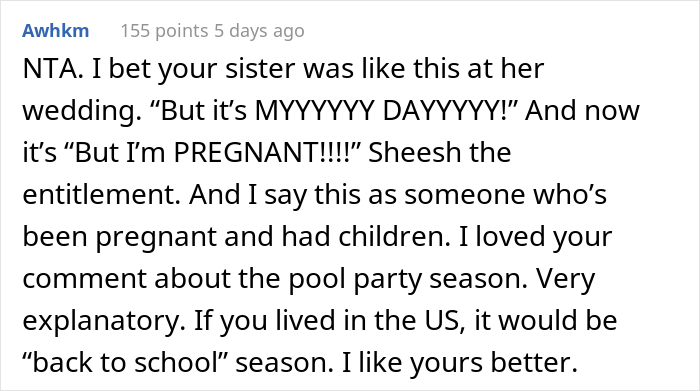 This one right here is hilarious

Bikinis aren’t sexual. It’s the mindset from the start! 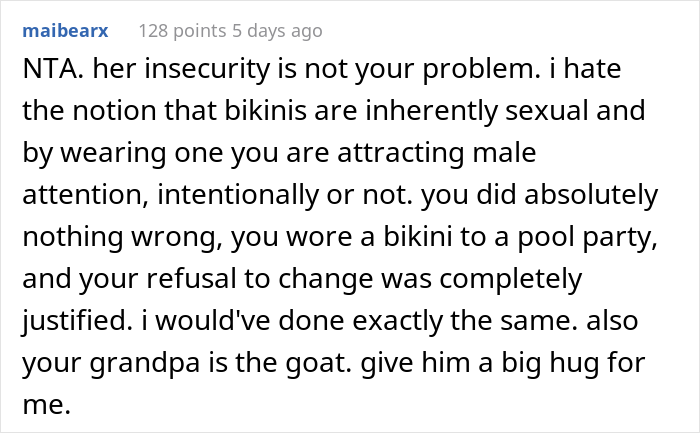 Ouch that would hurt

Trust is what keeps a relationship going 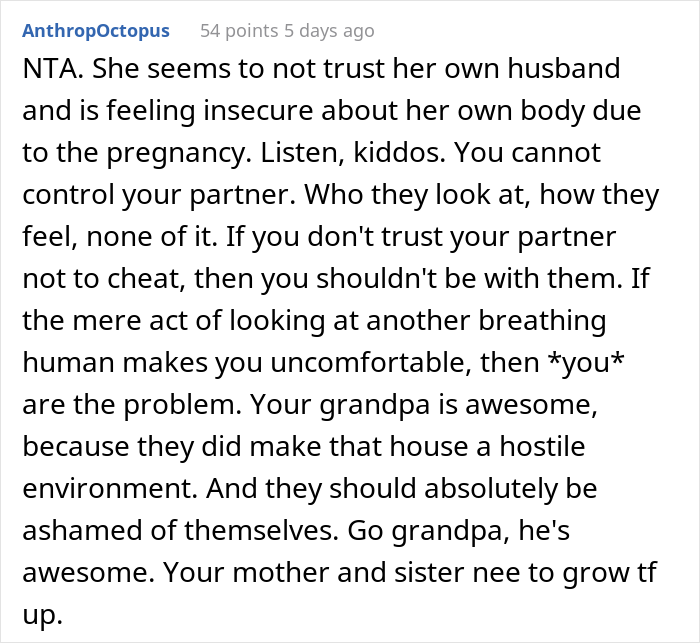 Grandpa getting all the love 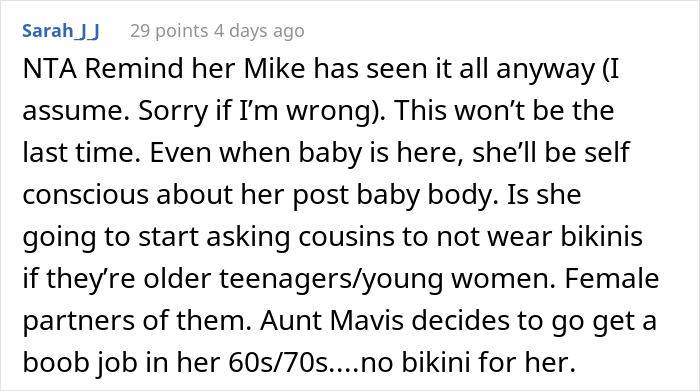 Sis deserves all this? 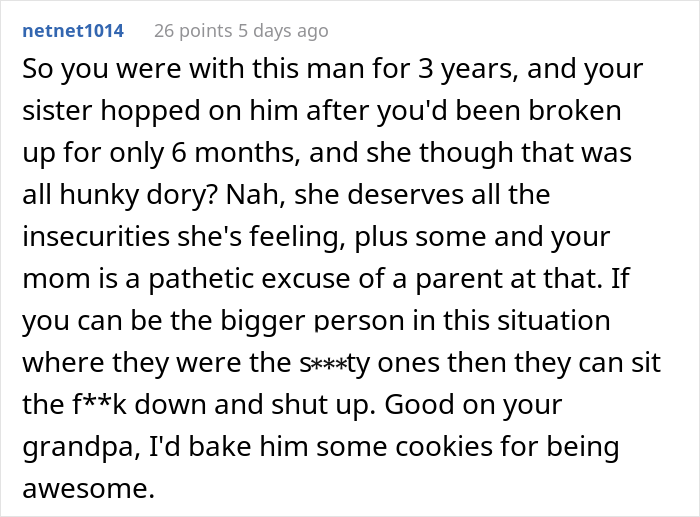 Exes can be risky…