One can value their time for however much they want.

Others are allowed to say that they are asking for an exorbitant amount but they have no right to get angry about it. They can simply look elsewhere for the product or the service they want. However, most people do not think like this and act irrationally. You see this woman asked for $35 per hour to babysit three kids and whether it is okay or too much doesn’t matter in this case. Because if they didn’t like it, they can look elsewhere.

Rather than doing that, they got pissed off as they probably expected to get the services for free or for very cheap. And even though usually teenagers babysit as their first job, that doesn’t mean it is an easy job. Especially if the kids are quite young. She quoted this amount because she could make much more while doing freelancing but decided to lower her price just because they are related to each other.

She starts by saying how she is a software engineer and also freelances at the side. 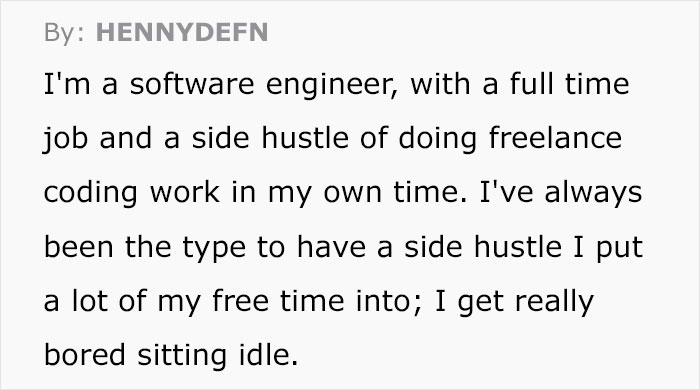 She is clearly able to make a lot even by her ‘side hustle’. 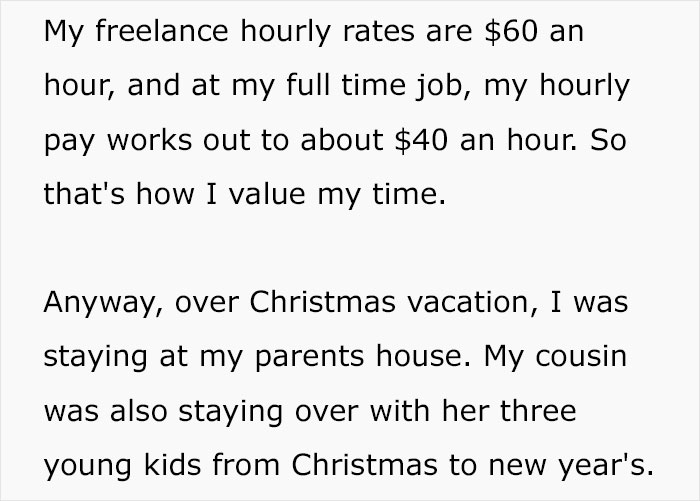 So even on Christmas, she wanted to continue to take some extra jobs since she had nothing else to do. 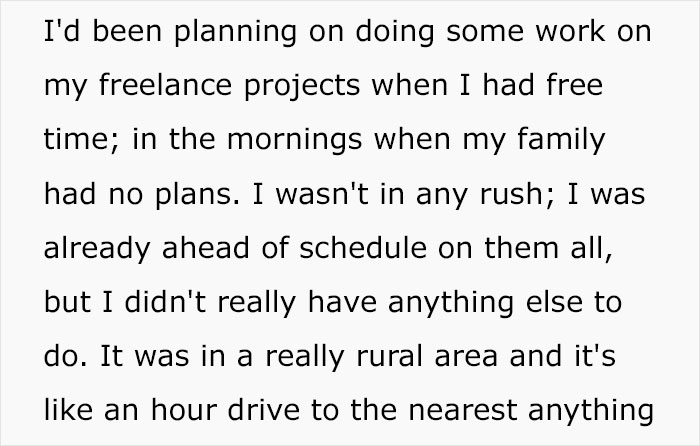 However, her cousin wanted her to babysit her three kids so they could have a getaway. 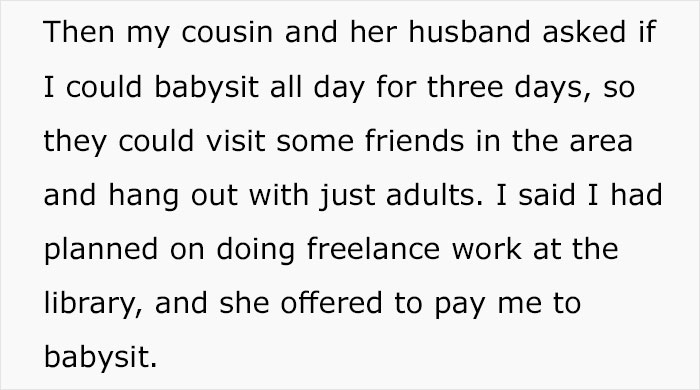 And even though she didn’t want to babysit, she gave them a much lower number than what she usually gets. 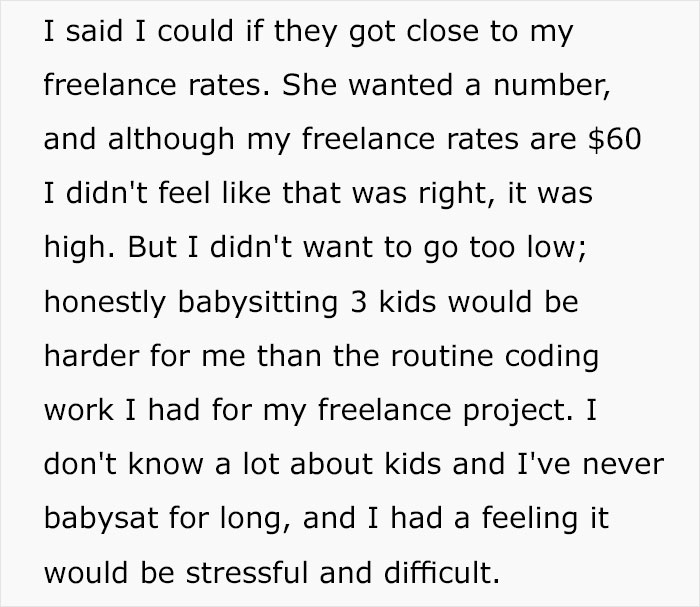 However, they didn’t like that amount and called her many names for valuing her time highly. 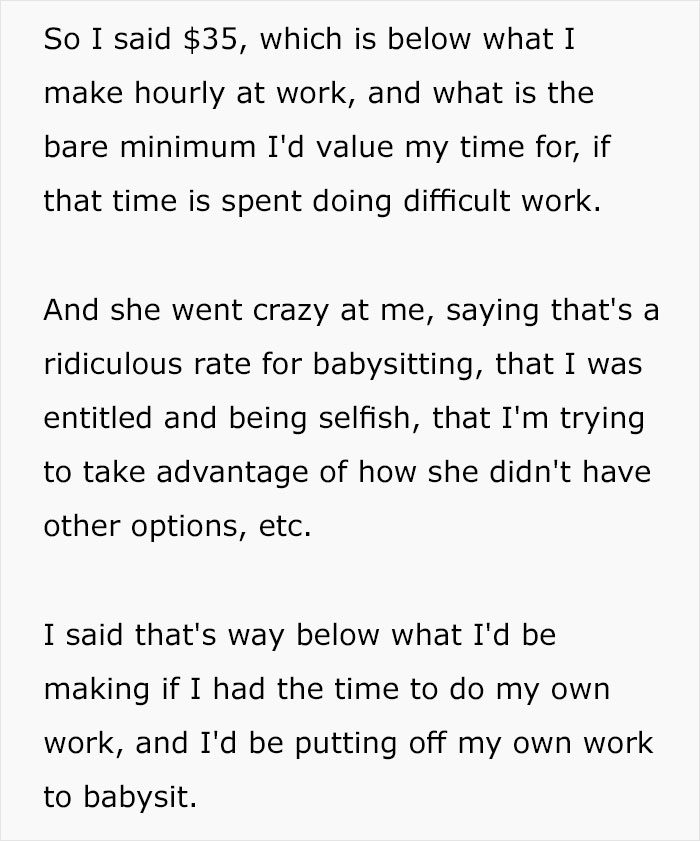 Even her husband joined in to call her stupid and immature. 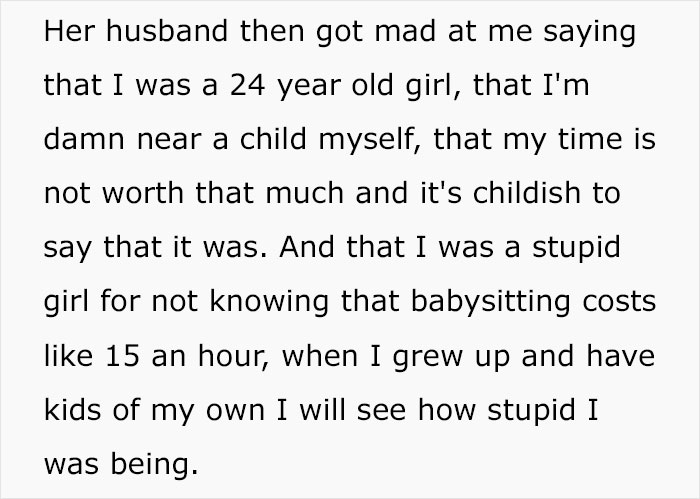 She actually reacted quite calmly and walked away from the confrontation. 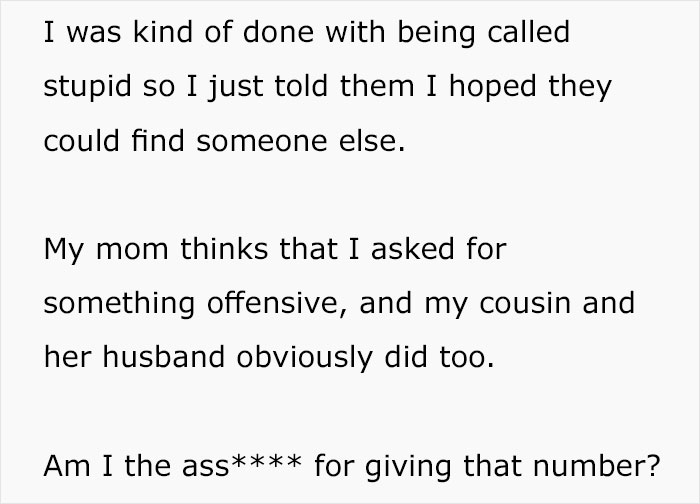 Yeah at the beginning of reading the post I thought that OP was going to make her family pay for her to babysit her cousin for like a couple of hours max… but three days, full time, for three kids??? wtf, that’s really not ok to ask someone from your family to do it.

Even if you pay them, you basically blocking three days of holiday, who should be to relax, of one of your family members so that you can go have fun! My sister is asking that often to my mom, but it’s more like leaving the kids with their grandparents for a few days vacation, my mom enjoys a lot spend time with her grandkids so that’s really not a problem. But here, asking a 24 yo to babysit three kids for three days straight is another story!

If I was OP I’ll have refused, whatever the money they were offering. It’s her holiday too and she should enjoy her time! –DrFolAmour007

Unsurprisingly, people in the comments took her side as well.

First of all, they should have made arrangements. 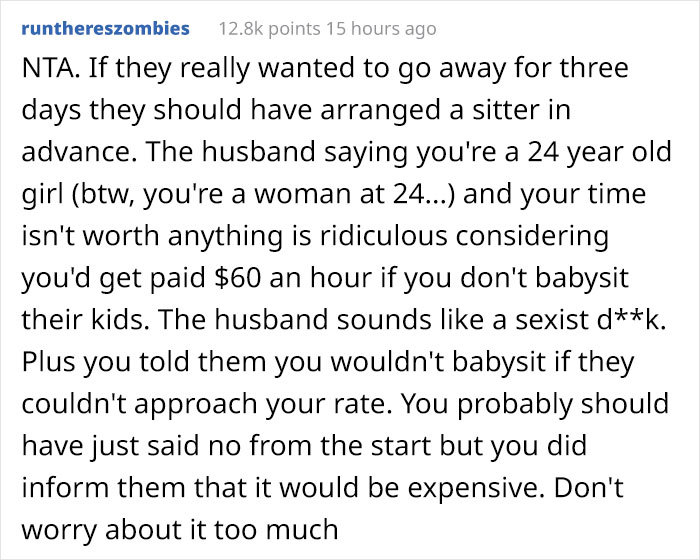 They should have not left it at the last moment.

And she didn’t even ask for that much as it is quite reasonable. 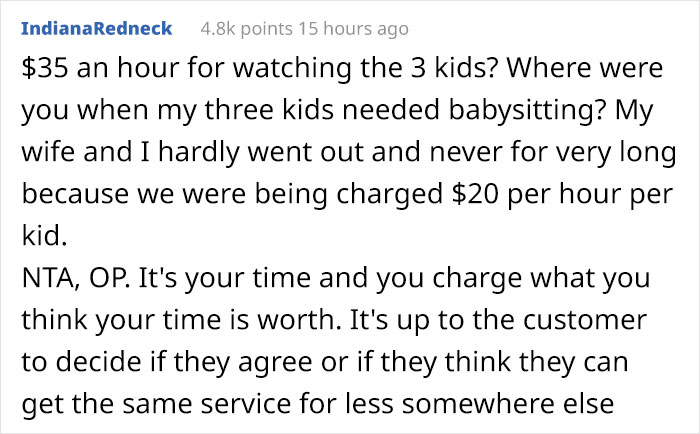 Even if they didn’t like the amount, they could have kept quiet. 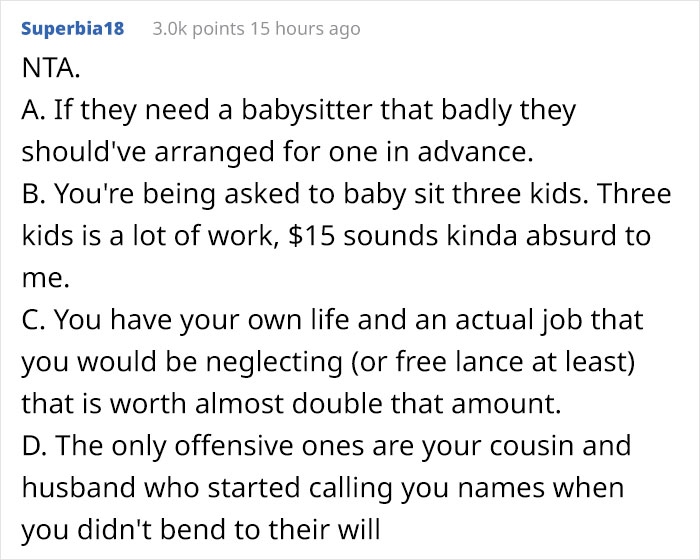 At the end of the day, it isn’t her fault they don’t have a babysitter.

If she is a ‘child’ then they are literal babies. 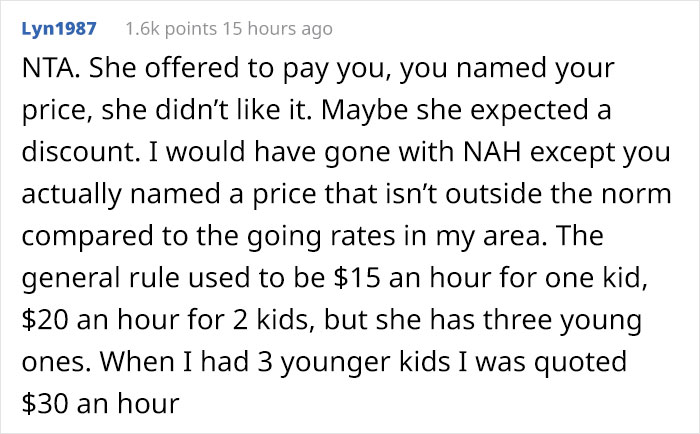 I have no idea why everyone in her family thinks she was in the wrong.

They should have planned it better. 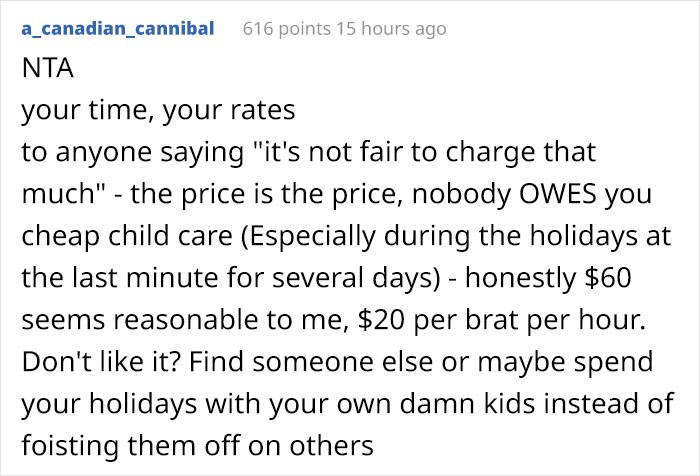 It’s interesting that he says OP is selfish when he is the selfish one. He and his wife want to ditch their 3 kids for 3 days to go have fun, assume OP owes them her time, and they want to grossly underpay her. She doesn’t sound like the selfish one to me. I would have said no upfront, and if they called me selfish, I would have said, “Okay. But I’m still not sitting for you.” Then, I would have gray rocked them anytime the topic was brought up.

If my mom joined in guilting me, I would leave. –sisterfunkhaus

It is possible that they thought she would do it for free.

What are your thoughts on this? How would you have acted in this situation? Let us know your opinion in the comments below.