You need to listen to your employees.

Many higher-ups make the mistake of thinking they know what is best for the company and that every employee needs micromanaging. Sometimes they will be too harsh while not even understand what is happening in the work department. Rather than helping, it can actually affect the overall performance negatively. But most of the time they don’t even get to face the consequences because they can easily put the mistake on an ‘underling’.

However, there are can be some unique opportunities when you know you can take advantage of their overconfidence and hubris. This is one of those times. It is mandatory for an employee to take breaks and there is also a maximum hour limit for one shift. The director apparently didn’t care and asked an employee to stay for a meeting even though he was well aware that he had been working all night. We as you can imagine he got his comeuppance.

This story starts off by explaining that every company has a person who is called upon when nobody else is able to fix something. 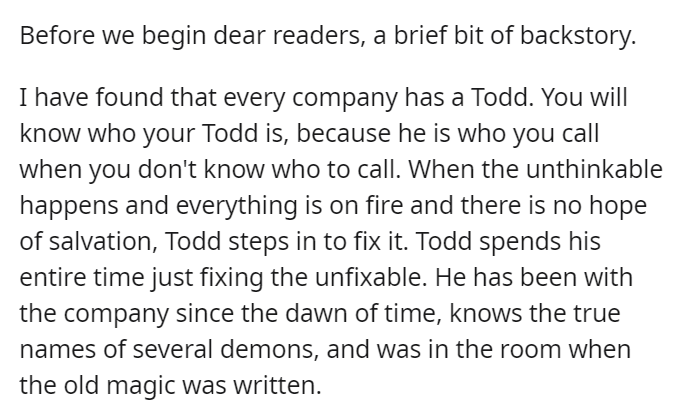 Essentially a person who overrules everything and knows the ins and outs of everything.

And this guy got the chance to integrate with this team of specialists. 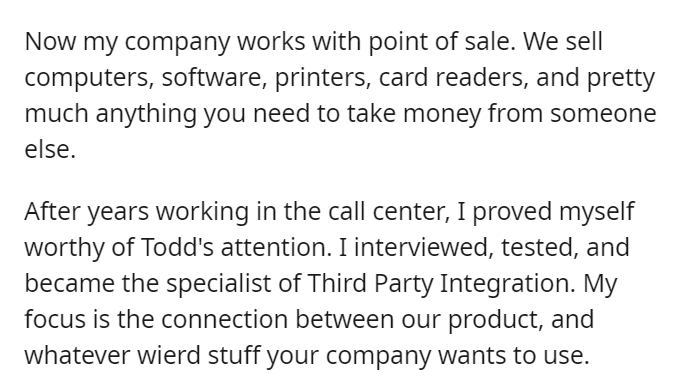 He was on a probationary period for a month.

That is why it was paramount that he prove himself in the allotted time. 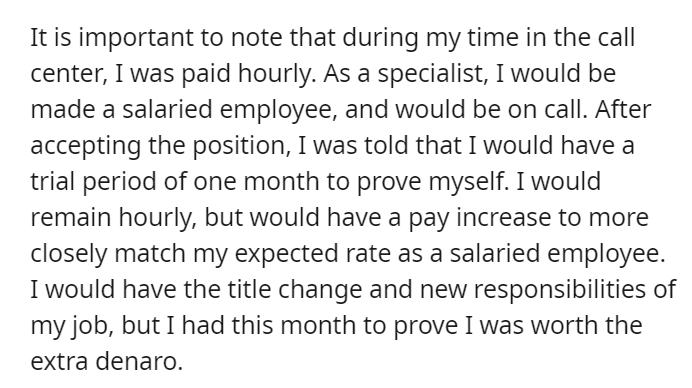 And only on the first day, they got a call from a client who has always been a bit ‘needy’.

He had a list of things that he wanted to be done in a specified amount of time. 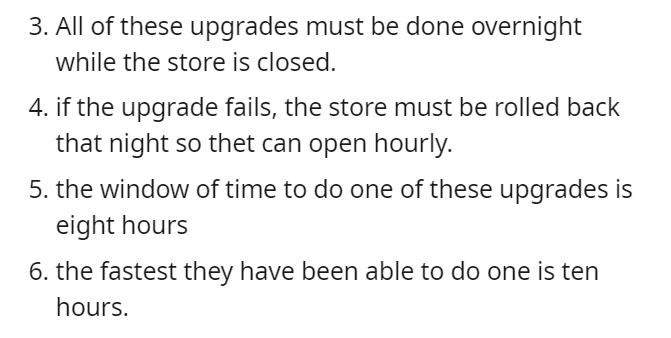 And this guy volunteered to take this new job under his wing so he could prove that he was worth it.

If you work for a small company, there probably is a Todd of some sort, even if it isn’t to the extreme extent of this story. If you work for a company that’s large enough to have plenty of different teams distributed over different geographical locations and still have someone that could be considered a ‘Todd’, then that’s a failure of the company.

I’ve worked at startups and a massive F100 company and the F100 company had several horribly disorganized departments that pretty much relied on their ‘Todd’ to not only fix stuff when shit hit the fan but pretty much facilitate every part of daily work. It’s a horrible way to operate a large company. I won’t get into specifics, but let’s just say this was one of the big reasons I left. –DeBarco_Murray

All in all, he tried his best and worked hard.

However, things don’t always go perfectly which was not on him at all.

That is when Steve steps in and tries to put the blame on the poster when everyone knew it wasn’t his fault. 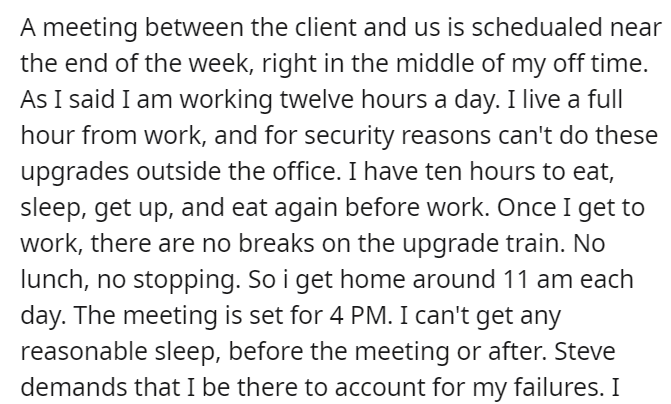 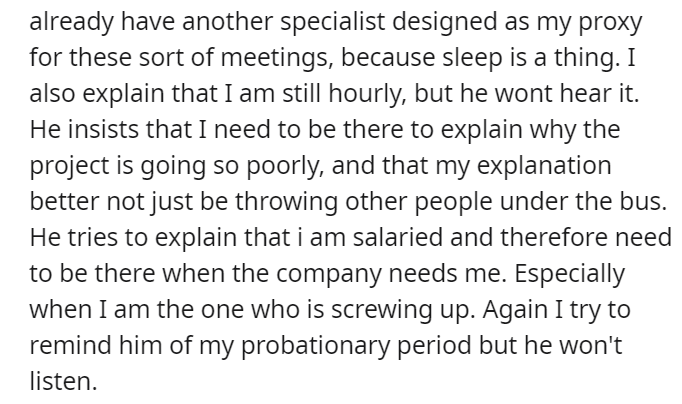 So that is when the wheels in his mind start turning and he hatches a plan. 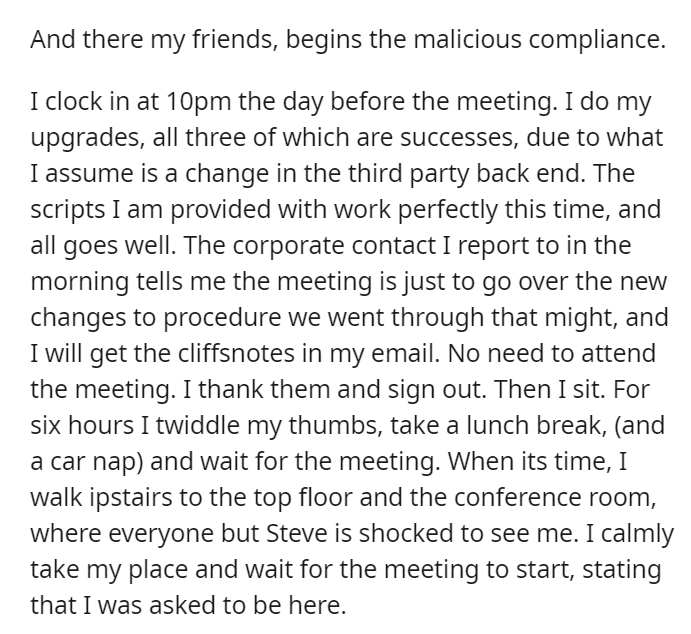 Calling it a ‘plan’ might be a bit far-fetched as he decided to follow what Steve said to a T. 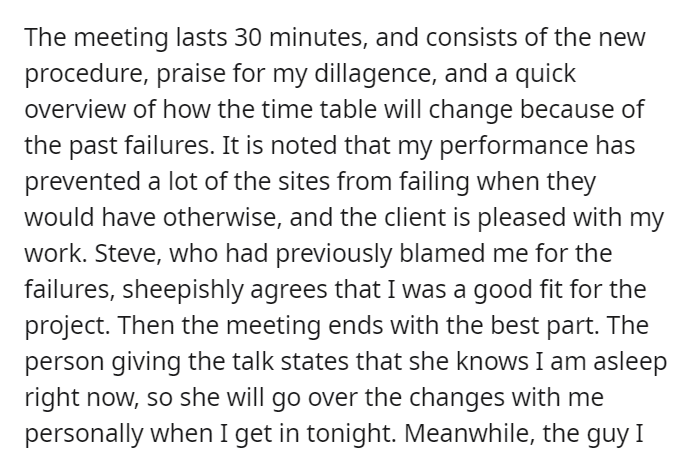 Things go more or less smoothly and everyone has essentially been completed. 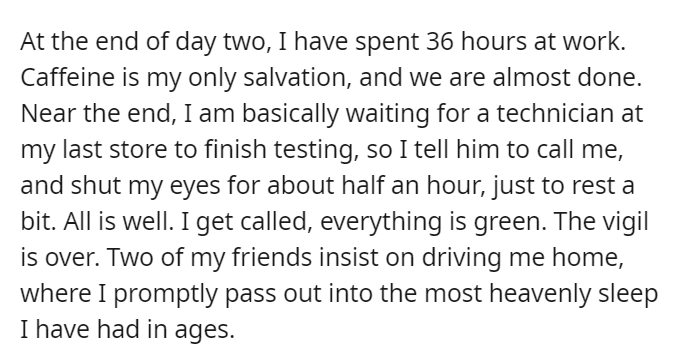 But then is when he is called in by HR for sleeping on the job. 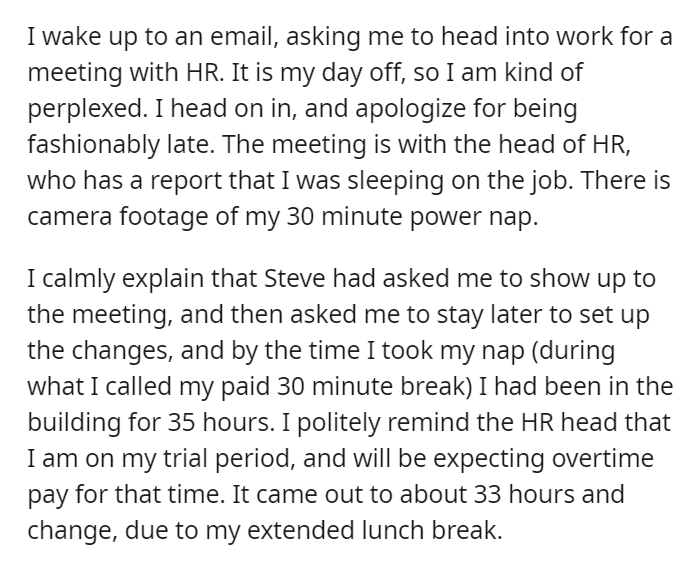 And as you can imagine, after hearing his side, things don’t go well for Steve and he gets what was coming for him. 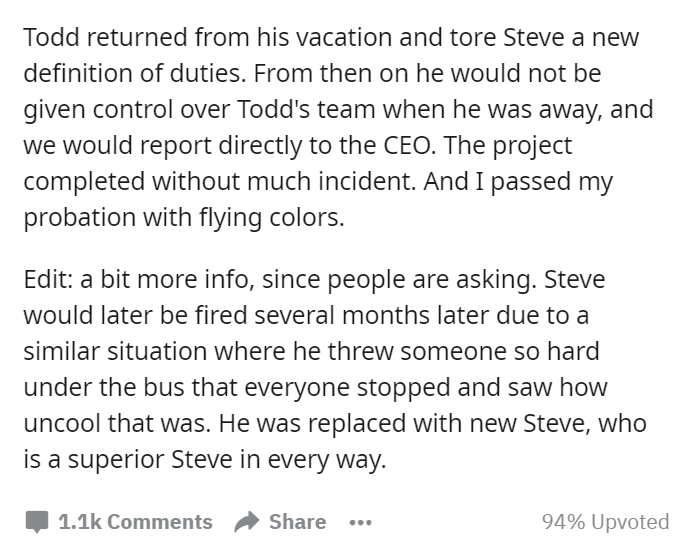 Have you ever faced something similar? If so, how were you able to circumvent someone else trying to throw you under the bus? Comment down below and let us know.