Every company has a Karen.

Some might even have several who think they know everything and are unwilling to compromise. They might not even be your boss but will act like they are just because they feel that they are entitled to some sort of special treatment. The internet is full of stories about entitled people who do the weirdest things that make us think that those stories are all fake. But I assure you that this Karen wanting someone to come work at 5 am or this one berating a customer for being a liquor store are just the tip of the iceberg.

So if you have ever wanted to get back at such a person but didn’t know how to, then you might get some sort of enjoyment out of this. We all know how complicated it can be if your colleagues work in different countries. Setting a schedule that is easy for everyone can be a right pain in the a**. However, most people would try their best to accomplish this without forcing someone to work in the middle of the night. Not this woman, she was apparently hell-bent on doing what was the easiest for her and nothing else.

This sort of thing happens a lot especially since there is a lockdown and most people are working from home these days.

Not everyone is awake at 4 am in the morning especially if they have work the next day. 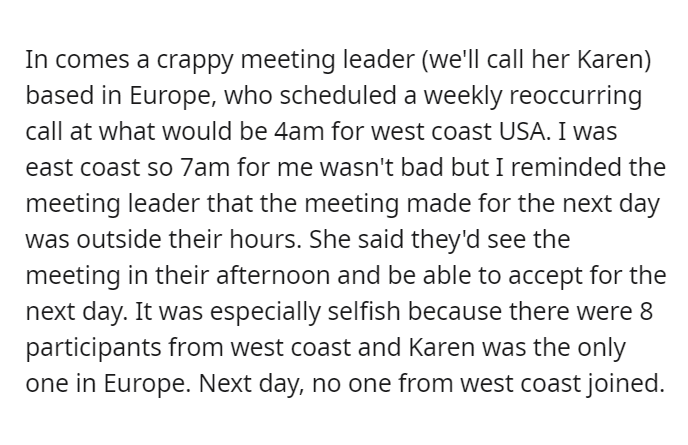 But no one could do anything but agree to what she wanted.

However, it didn’t last long, as someone decided to give her the taste of her own medicine. 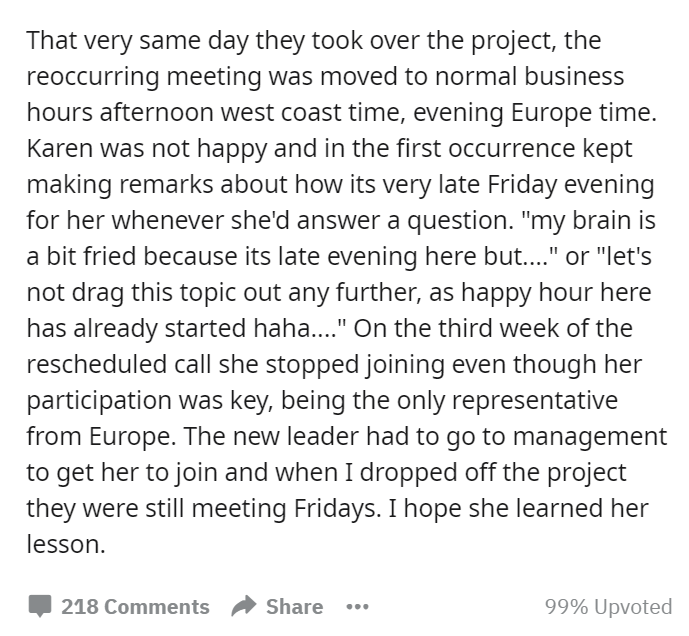 As is expected, she wasn’t quite so keen when she was on the receiving end of this. 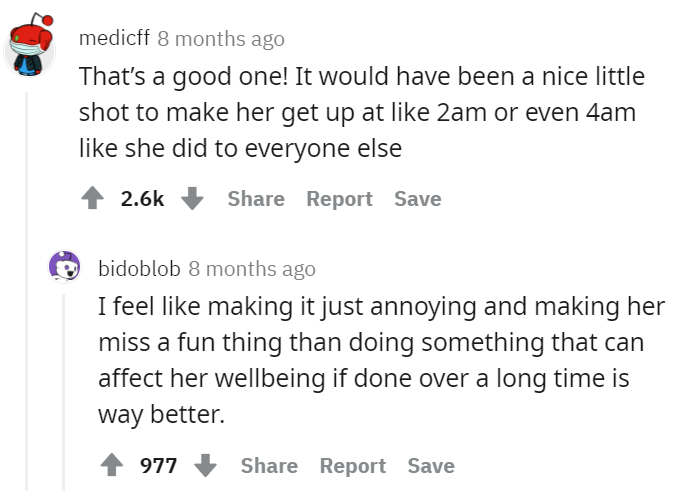 People in the comments had varying opinions on this matter. 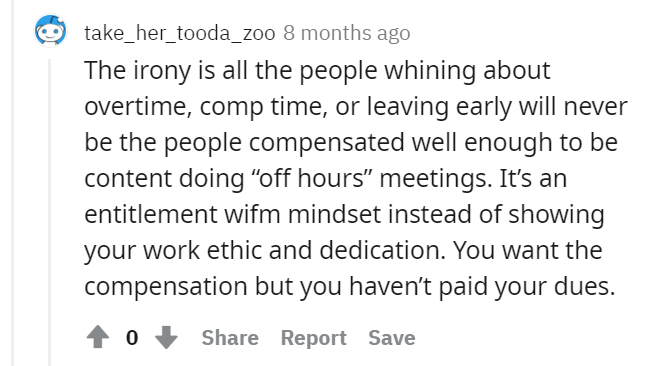 And many shared their own personal experiences when they had to deal with something similar. 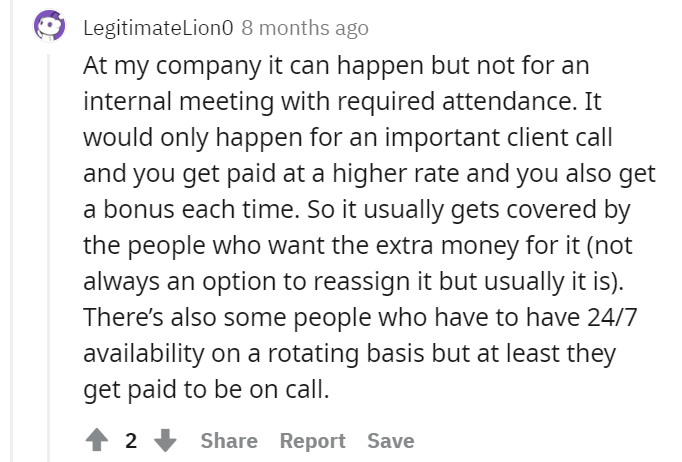 Not everyone is a night owl and people need sleep. 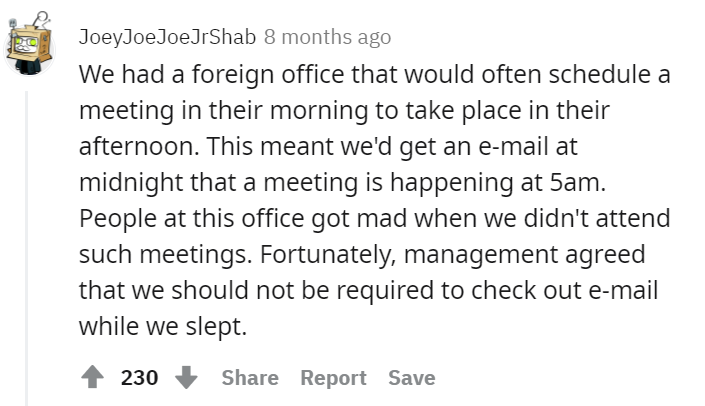 This is quite different since they did try their best, they just made a mistake. 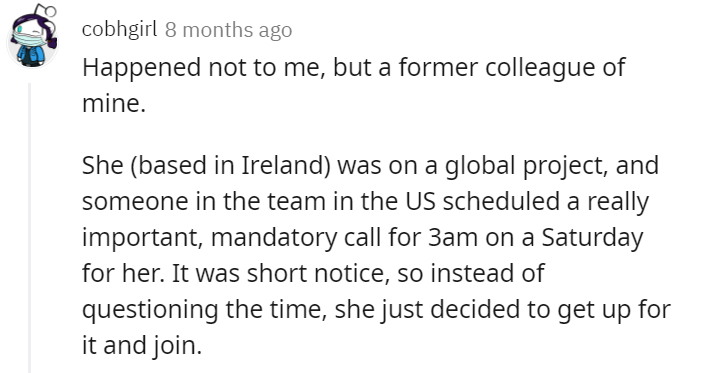 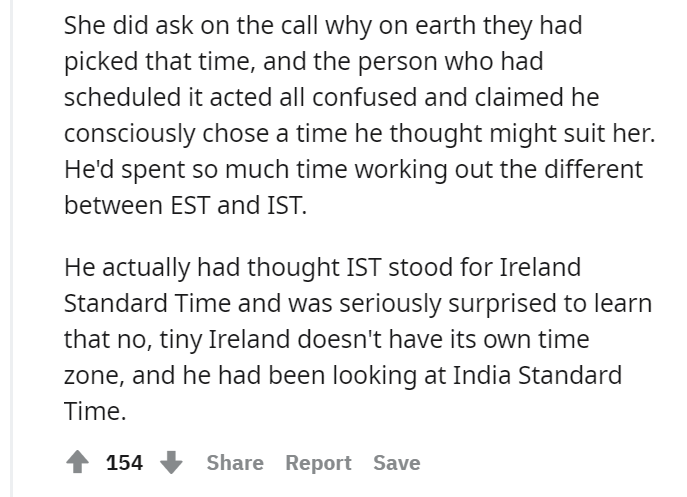 You say you hope she learned her lesson, but I doubt it. In my experience, the vast majority of people don’t really believe in time zones. That is, they know they exist, they intellectually understand how it works, and yet don’t actually believe it in their soul. What they believe is that everyone should be on the same schedule they are on. Furthermore, that it is a moral imperative that everyone should be on their same schedule— it makes you less of a good person to keep a different clock. I think this is where “morning people” come from as well.

She can easily keep the idea that her afternoon meetings were morally right, while their Friday meetings (her Friday night meetings) are morally wrong, and not learn a thing. Because in her heart, time zones don’t really exist— only her time does. It’s a very easy belief to fall into and unfortunately, many people share it.-Iunnrais

Sometimes it is inevitable that you won’t be able to please everyone but it is how it is. 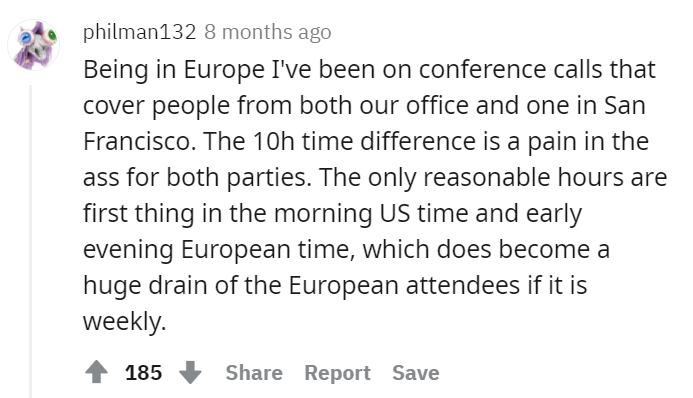 People who have family overseas can certainly relate to this as there is never the ‘right time’. 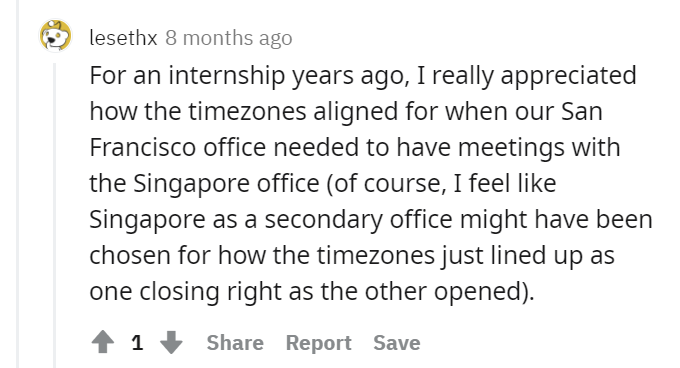 This comment proposes the perfect way of dealing with this since nobody would want to prolong their pain. 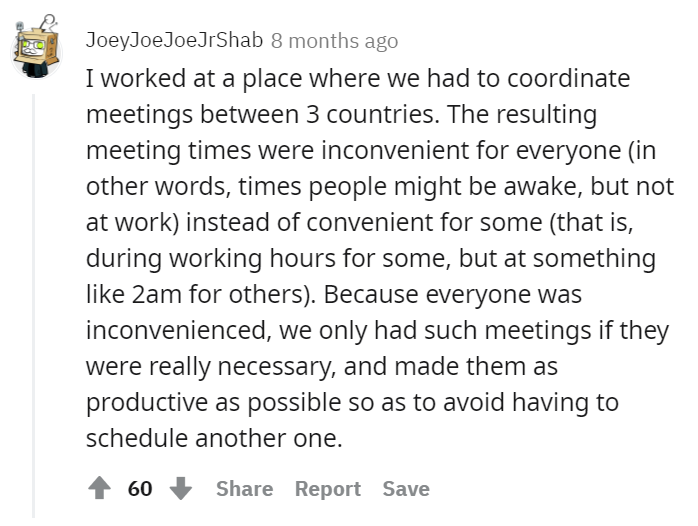 But sometimes you have to deal with it the best way you can. 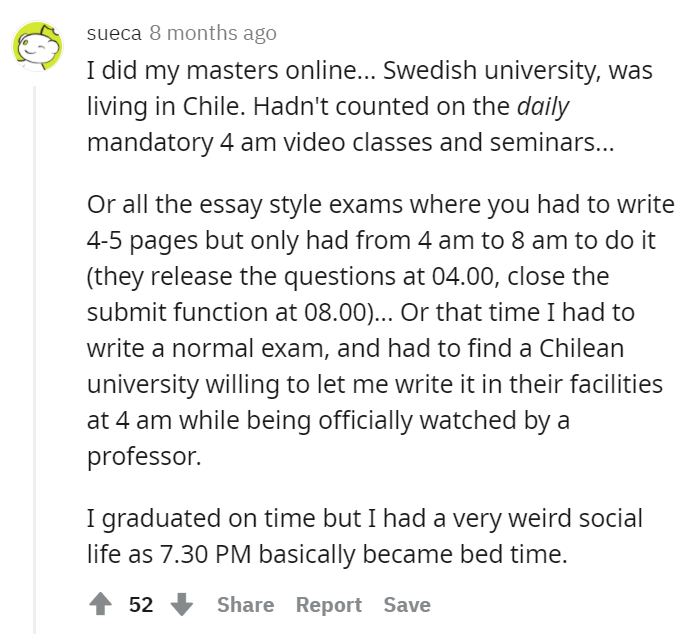 Have you ever dealt with having to coordinate different time zones? Comment down below and let us know. Don’t forget to share your personal experiences in the comments below.