The villainous portrayals you guys see on screen are far from the personalities of those who execute them.

Has there ever been a time that you are watching a movie or a TV series and the actor who is playing the villain nails the role so well that you start hating the actual actor who plays it? If that is the case, then my friends no one else would have played that role better than that very person you just started hating. To be very honest, it is not easy on those who play villains. Now yes, there are some expectations out there like Heath Ledger who played the infamous Joker in the Batman movie. Everyone absolutely fell in love with him. That was a one-off case where no one really hated Heath Leger or the bad guy he played, we all absolutely love him and Heath as well. But there are examples contrary to this one as well. People tend to hate the actors who play beyond belief and would actually post hate comments on their social media accounts just to show their support to the heroes.

This is actually a little unfair if you ask me Because if you do a little research on these actors who play villains in the movies, their personalities are exactly the opposite of the characters they have played. And it is not an easy job to execute a role that is so dissimilar to your own character, yet these amazing artists take on the challenge and generate a product that is forever to be cherished. Just think of Thanos. The biggest live-action movie villain we have ever seen and the character was done to perfection by Josh Brolin. And just look at the actual character of Josh Brolin’s, two completely opposite, never meeting personas. That’s the true quality of an actor.

Today’s post is for those who associate the characters with the actors who perform them, a bit too much and we hope to make a statement clarifying that these actors are actually the sweetest people you guys could think of. Here are 15 examples of actors who nailed villain characters but are very sweet in real life.

Scroll down below to read the stories about the good these villains have done in real life and become their fans all over again.

1. Gary Oldman has executed some of the most reserved characters in his career with the likes of Sirius Black, and has also played the villain in many movies, is actually a sweety in real life and a very loving and caring husband. 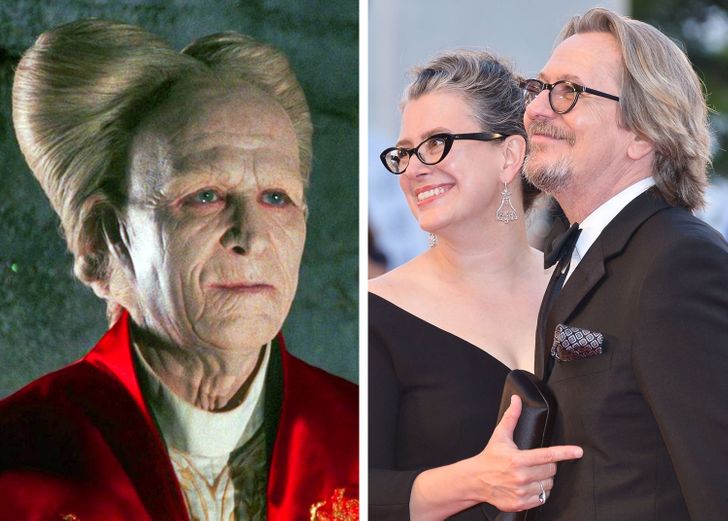 2. Josh Brolin who as Thanos destroyed half of the universe’s population with a snap in the Avengers Infinity War is actually a really sweet guy. He has played a lot of comedy characters. Here’s an image of him celebrating Halloween like a cutie. 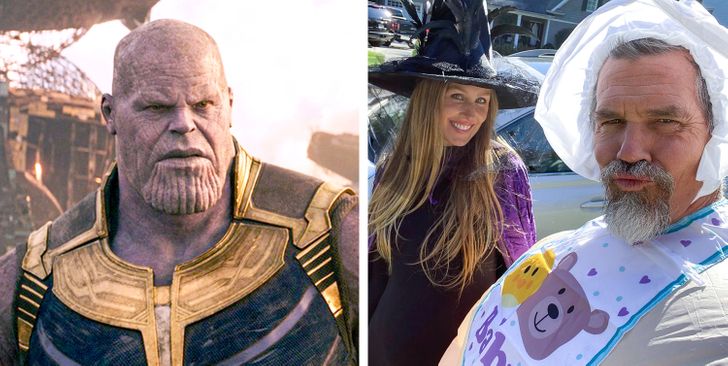 3. Although as General Zod it seemed like he had no heart left in his body, in real life Michael Shannon is a full-on family man. 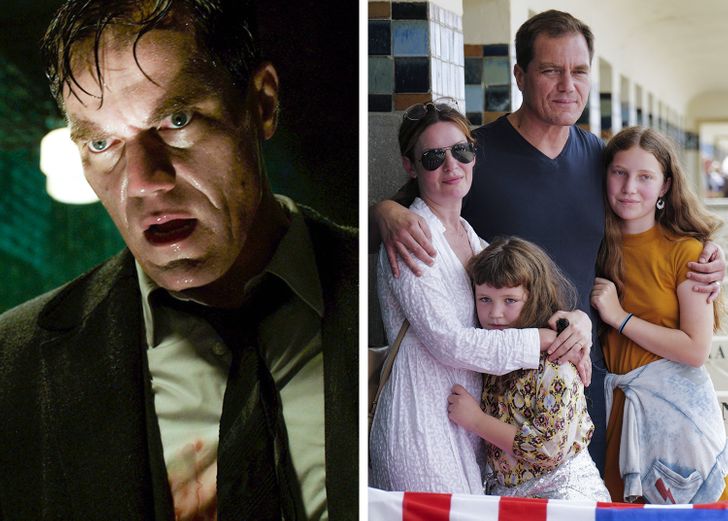 4. Mads Mikkelsen executes dark characters like no one else, it’s those eyes that do the magic. But believe us, those eyes are very normal in real life. And the guy is very sweet too. He just wished everyone on the International Cat’s Day. 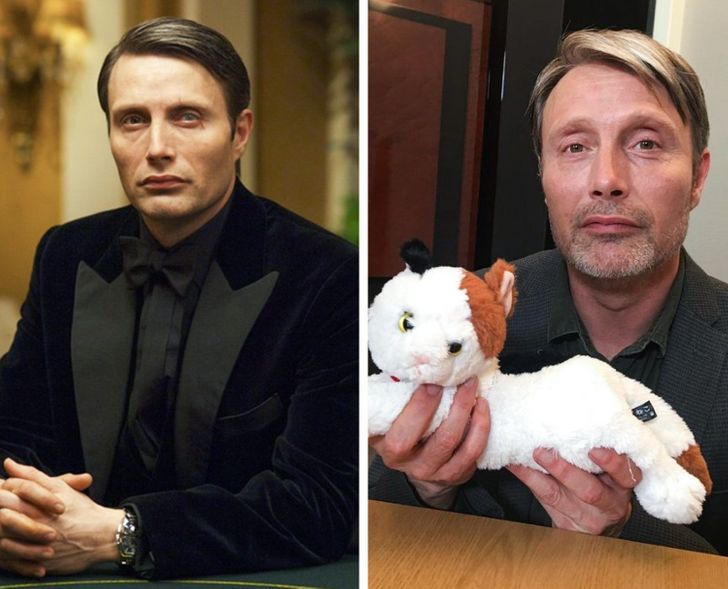 5. Ron Perlman absolutely loves playing the bad guy in the movies he is in and it shows in his amazing activity. But in real life, he is a cat man, an absolute lover. 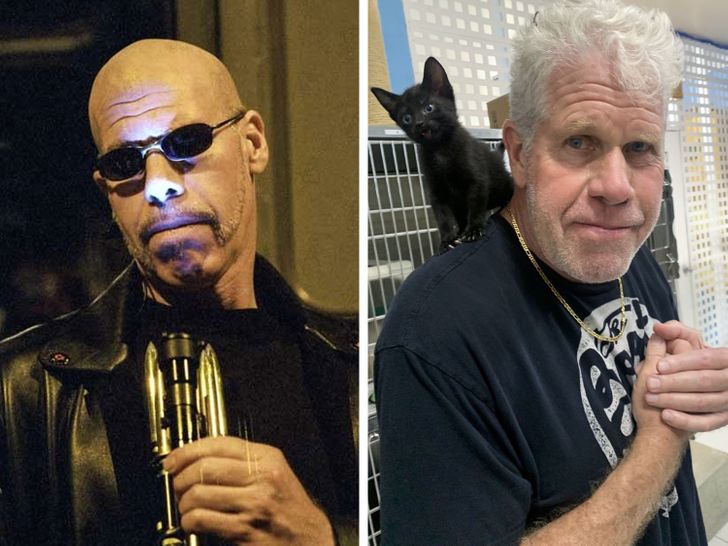 6. Other than levitating and taking baths in creepy black substances, in his free time Stellan Skarsgård loves to showcase his sweeter side. Here’s an example, his picture with our very own Jared Harris. 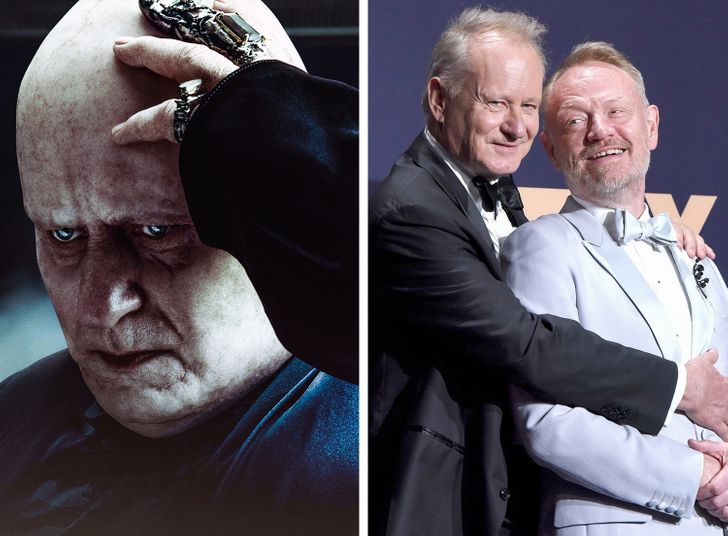 7. The grumpy character he plays and the character he actually exhibits in real life are totally opposite in the case of Javier Bardem. 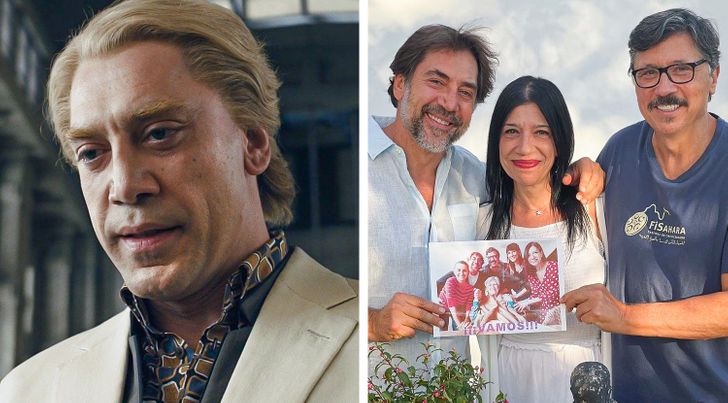 8. After all that Thanos did to his family, Drax still loves to joke around with him when they are off-screen and not playing their respective villain characters.

Dave Bautista also played a heel as a character The Animal Batista in the WWE. The guy made everyone hate him but is actually a real sweetheart. 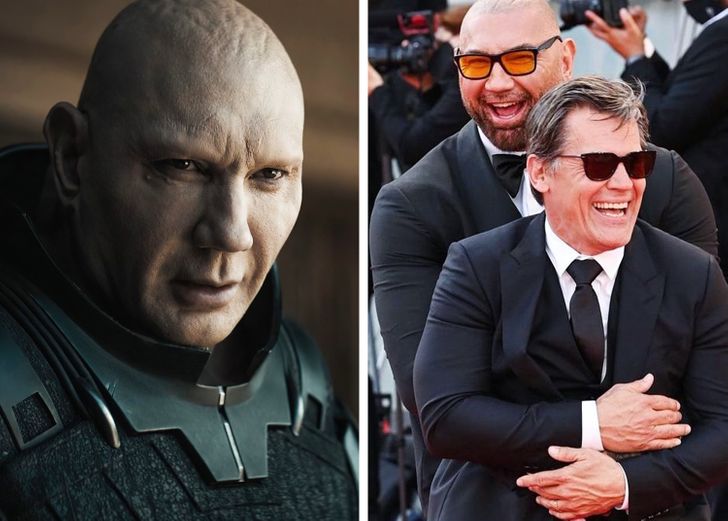 If you think of it for a second, it takes a lot of effort to create this artificial personality and not let it take over your real one. The whole idea of method acting when actors go beyond limits to bring the best out of the character they are performing, it often gets hard to get out of it. So glad, these people are not where near the villains they have played. Absolute legends!

9. When he is tired of erasing everyone’s existence off of the universe with his eyes, Antony Starr goes offset and spends quality time with his dog. 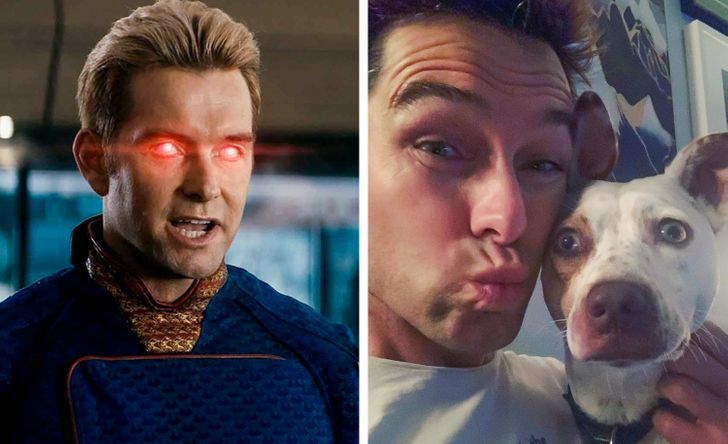 10. Although it is true that Palpatine could expire all your brain cells in a moment with his telepathy, it looks like in real life Ian McDiarmid would cry if someone screamed at him. 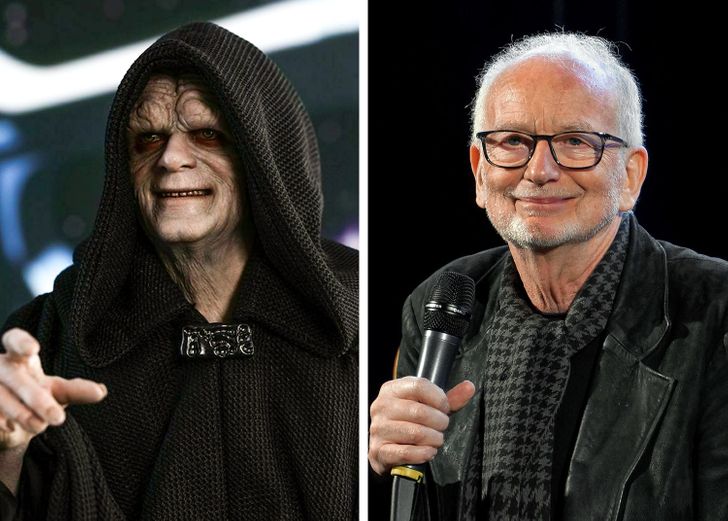 11. We are so glad that Gus Fring was only a character played by Giancarlo Esposito because that sort of mastermind-ness should only be put towards the good, as he does. 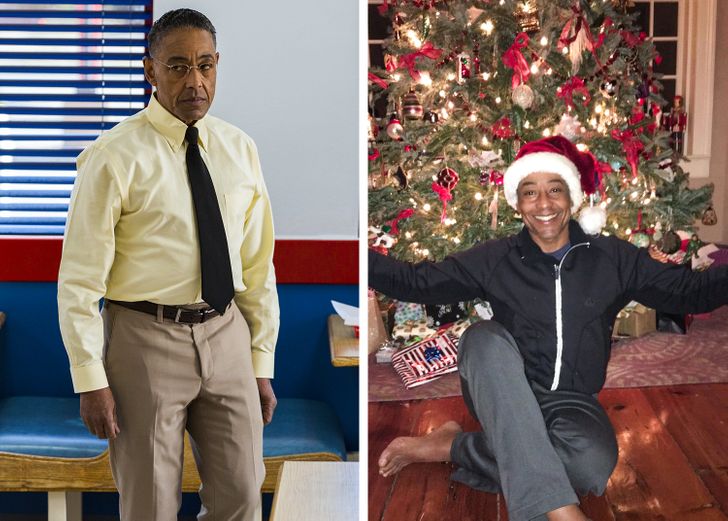 12. Some actors, although extremely sweet in real life, were just built to play the best of villains we have seen on the cinema screens over the years. David Bradley and his amazing work in the Harry Potter movies and Game of Thrones is the perfect examples of those gifted by nature actors. 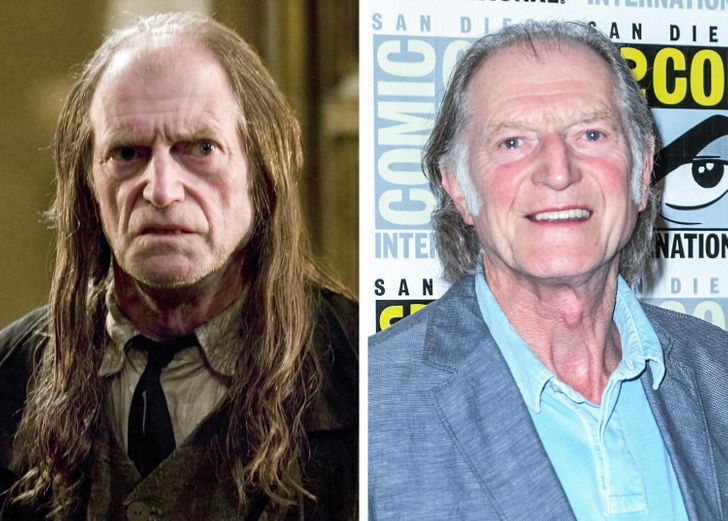 13. And speaking of Harry Potter, he who must not be named, Voldemort, played by Ralph Fiennes is actually the exact opposite of who he really is. Thankfully.

Ralph is a huge fan of selfies and loves to take them all the time. Cute! 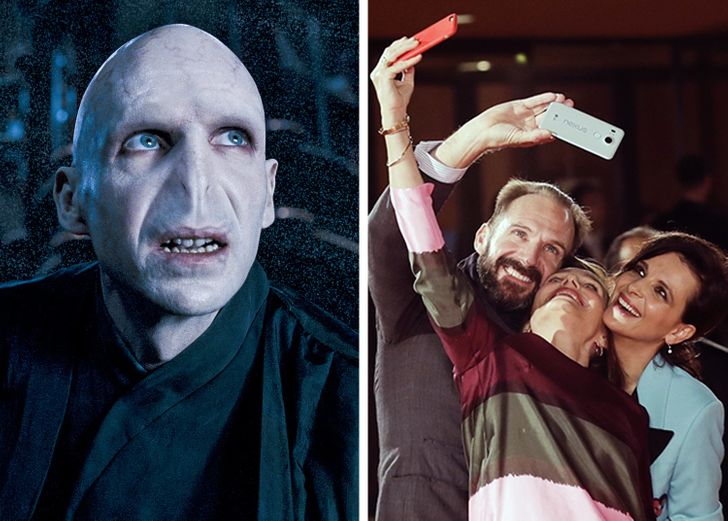 14. On one side is Ramsey who wouldn’t flinch if he say a beast eats a human alive. And on the other side is the actor who played Ramsey, Iwan Rheon, who raises his voice for the protection of nature and is a real sweetheart.

Yo, his expression game is so real. 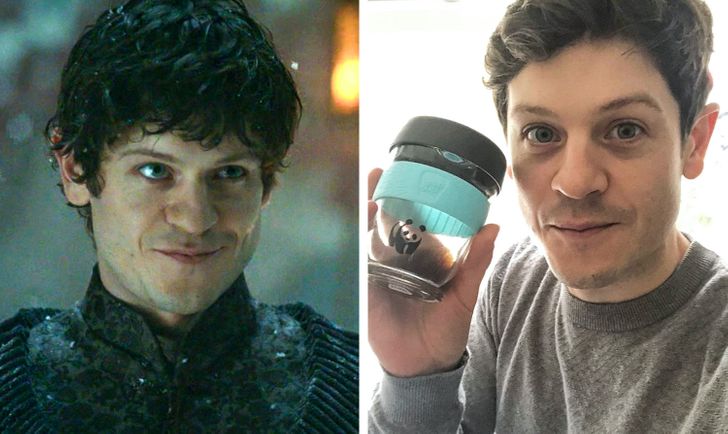 15. We did see him execute Doc Oc so smoothly on the screens 17 years later, Alfred Molina is also a perfectionist when it comes to petting doggos. 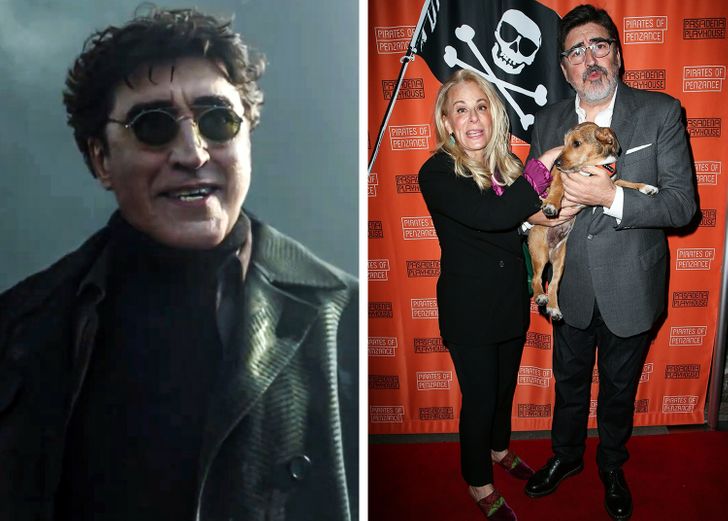 I really hope you guys enjoyed it. Who is your favorite villain? Share in the comments section down below.