There is a heartwarming story behind every pet.

Animals are innocent beings; all they want is love. If you ever see a dog or a cat following you and meowing around you, adopt him/her. The innocent animals wandering on the streets are worthy of love and they turn out to be the goodest babies. They are no less than the pets you would get from a pet shop. They would jump in your lap, wait for you to come home and get sad to know that you are moving out without them. Once you start living with them, it would be impossible for you to give them away to anyone. You would go to any length to make them feel comfortable. Today, we have compiled 17 heart-touching animal stories for you that will melt your heart.

1. Turning his cone of shame into a sunflower. That’s how you turn a bad situation into a pleasant situation: 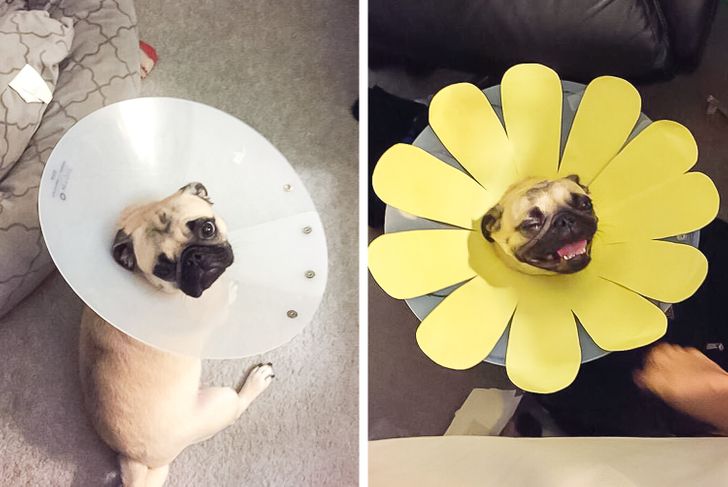 2. “My wife brought a kitten home saying that we’d “cure him and then give him away to new owners.” I was strongly against this idea and reminded her every day that it was time to give the kitten away. As a result, I’ve been waking up at 5 a.m. every morning for almost a year, because someone is licking my face. No, it’s not my wife.”

3. A dog who loves to get into his hooman’s lap:

“When my dog was a puppy, he was always trying to get on my lap, but he couldn’t jump high enough, so I used to help him. When he grew older, he could jump himself, and we would just sit together and cuddle. Now, he’s getting old and still wants to sit on my lap, but it’s difficult for him to get there. So I help him crawl up on my lap again. I love my old man.”

4. When a kitten licks your feet, adopt her:

“I went to a cat show because I wanted to get a kitten. But when I saw how much they cost there, I left. On my way home, I met a kitten. She was licking my feet, meowing, and asking me to hold her in my arms. I forgot about my pride, picked the kitten up, and headed home with her. I fed her, washed her, and combed her fur. And Luna turned out to be no worse than the cats that cost $280.”

5. “When Ravioli saw his pups for the first time!” 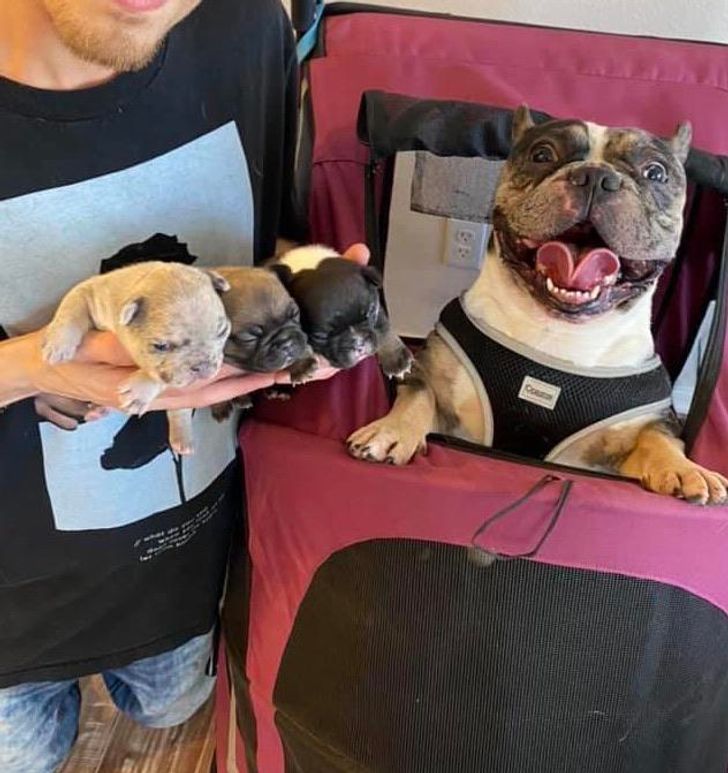 How happy is she to see her puppies for the first time!

6. When you get too attached to the puppies that you change your decision of sending them to the local shelter:

“3 years ago, we had an extremely cold January in our town. A local webpage posted a message that a dog had died at a construction site, and she had 7 puppies. 4 of them also died, but 3 puppies were still barely alive. So we took them home and nursed them back to health. We managed to find a new owner for one of the puppies, but failed to find a new home for the other 2. When it was time to decide whether we wanted to send them to the local animal shelter, we came to the conclusion that we should keep them, because we got too attached to them. They still live with us — they’re playful, arrogant, and the most beloved puppies.”

7. How to become the owner of the best cat in the World:

“Once, after the celebration of a city holiday, I bent down to pet a black kitten who was rubbing against my legs, and he sniffed under my denim jacket. That’s all — this is how I became the owner of the best cat in my life..”

8. The cats who started leaving food for a hedgehog:

“We lived with 2 cats in a house. In the summer, my dad used to leave them food in empty cans outside the house. Once, they discovered that a hedgehog was coming in the evening to find out what was left in these cans. So the cats started to leave food for the hedgehog too.”

9. When you go out for a walk and return with a dog: 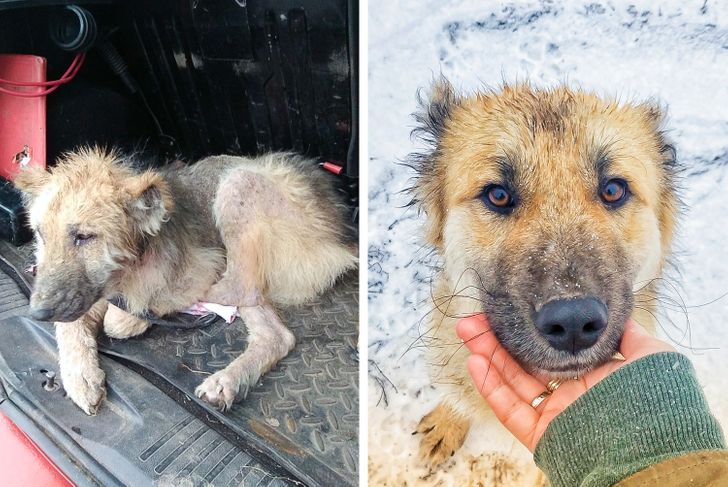 “We were out for a walk and a dog started following us. There were a lot of people around, but he chose us for some reason. He was bold, thin, and sick, his ears and tail had been ridiculously cropped. He moved slowly, he had seizures, and he smelled like trash. It seemed like he wouldn’t survive. Our hearts couldn’t bear it, and we decided to take him home, although we weren’t planning on getting a dog. We named him Baldie. 3 months later, he became unrecognizable and turned into Plushi.”

10. When you find a hedgehog and fall in love with him: 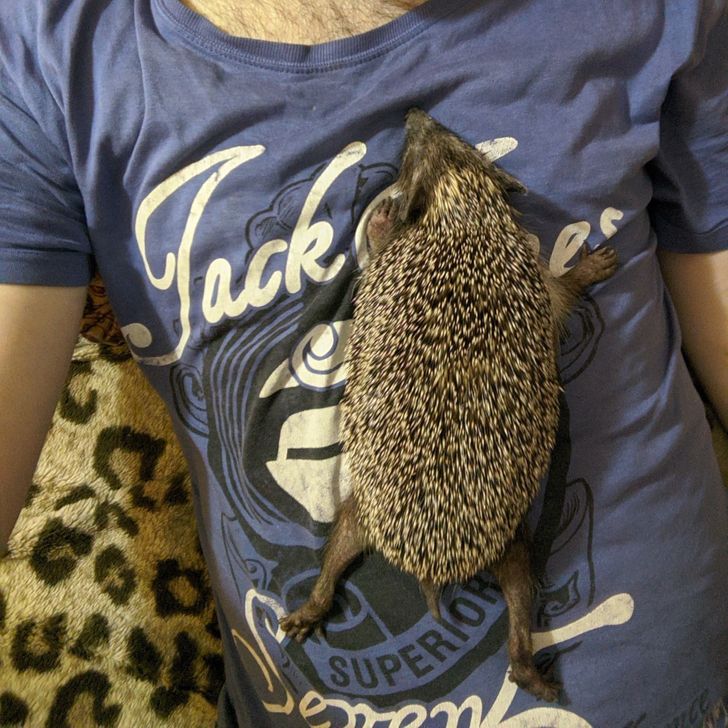 “Today it’s been 2 months since we found a hedgehog. Everything bad like the parasites, his weight of 5.2 oz, his baldness, and his temporary blindness are behind us. As a result, this cute creature can’t bear to be separated from his humans, even for half an hour.”

11. When a Dachshund lies down on the seat next to you:

“My dad was on the subway on his way home. There were a few people there and plenty of free seats. After he passed one station, a dachshund got onto the carriage. She lied down on the seat next to my father, trustfully relaxed, stuck out her tongue, and smiled. They went home together.”

“I witnessed a car accident. I bandaged the driver’s head and made him talk to me so he wouldn’t pass out. He gave me the keys to his apartment, told me the address, and said, “Go there and feed Callie! She’s probably very hungry there. You can stay for the night, play my videogames, and do whatever you want, just don’t forget to feed Callie.” The ambulance arrived and took this man to the hospital, and I went to his house trying to find Callie for an hour. I thought that she had gotten scared and hid under the bed or something. But it turned out that Callie wasn’t a cat or a dog, she was a tiny fish…”

13. When you get a cat with a new apartment:

“We got our cat, Ginger, when we moved into our newly rented apartment. An old couple was moving out from there to a nursing home. They begged us to not throw the cat away and even offered us money to keep him. We agreed to let him stay with us without any reward. Ginger lived with us for 11 years and moved from one home to another 5 times!”

“My cat’s name is Zoe. She was left behind when her family moved away. Every time I pack my things when it’s time to move, she gets depressed. She doesn’t eat, groom herself, and barely moves. Everything becomes alright as soon as she realizes that she’s coming with me. We’re now in what should be our forever home. And now, Zoe will always be happy.”

15. A pet owner who was confused if she should adopt a dog or a cat:

“We were going to get a dog so we went to the breeder and picked a puppy. But my husband persuaded me to not decide right away and to go see some kittens that same day. I reluctantly agreed. We drove 50 miles away from home. While in my dreams I was taking a dog for a walk, a fluffy, grey, tiny cat got on my lap and fell asleep. This is the story about how I didn’t get a dog, but now own a cat instead.”

16. Sammy, the guardian warrior of the house: 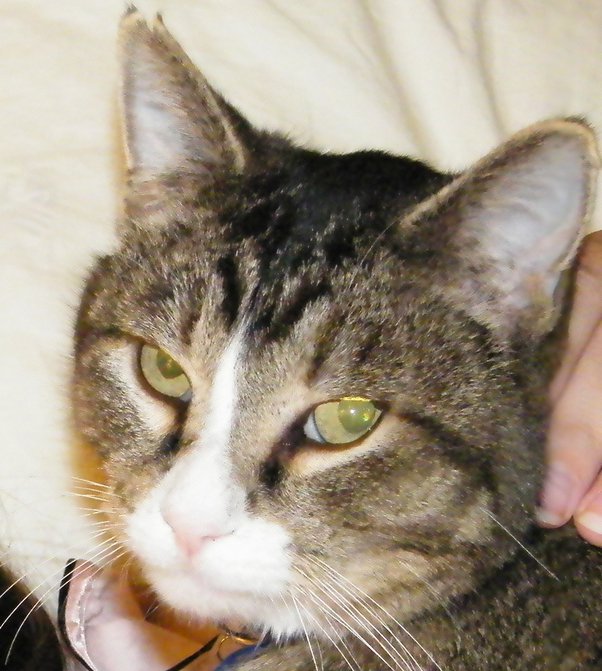 “Sammy was a vicious tomcat who ruled the neighborhood. That cat found taunting and fighting dogs amusing. His little ears looked like lace on the edges they were so torn up from fighting dogs and cats alike. Sammy’s had a weakness, his family. He had been known to chase neighbor kids on the command of his “kittens” or attack anyone he deemed a threat to his family. As far as Sammy was concerned, he was the guardian warrior of the house.”

17. A parakeet with leg paralysis: 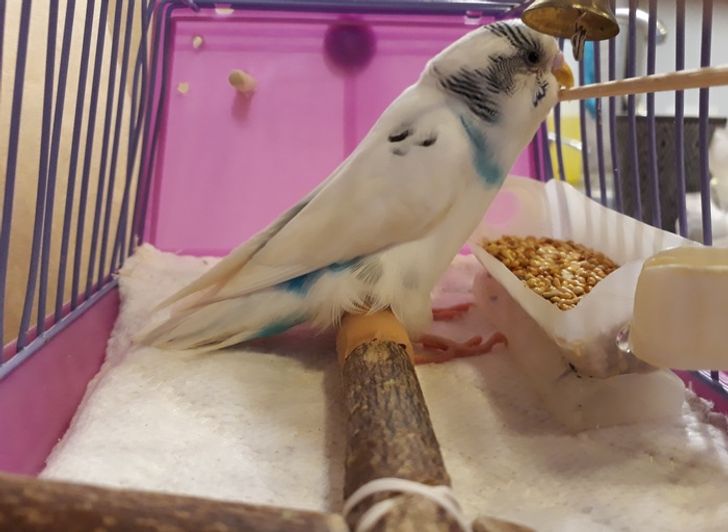 “I set up a cage for my parakeet with leg paralysis. He got ill 2 years ago, and together we came up with the most suitable design for his home. The doctor said that he’d live for maybe another 6 months, but he lives his bird-life to the fullest. He eats well, sings, flies, and talks. Sometimes, it seems that he has even forgotten about his legs.”