Spoiler: We have been eating dinosaurs all this time!

Over time, the evolution has completely changed how animals actually used to look approximately millions and millions of years ago. The creatures that today would look unfamiliar, odd and unpleasant to us were actually walking, jumping, and running around our planet many years ago. The descendants of these animals are very kind, small and polite now, in fact they would most likely to be scared of their ancestors and what they actually looked like in the past. Trust me, we are also horrified after learning information about the ancestors of our beloved modern animals and what they looked like. It is not a pleasant sight.

Out of curiosity, w have gathered information and pictures of our common animals’ ancestors. Their history, facts and all. If you are also curious to know about what the relatives of animals we are used to seeing today looked like million years ago then keep scrolling… 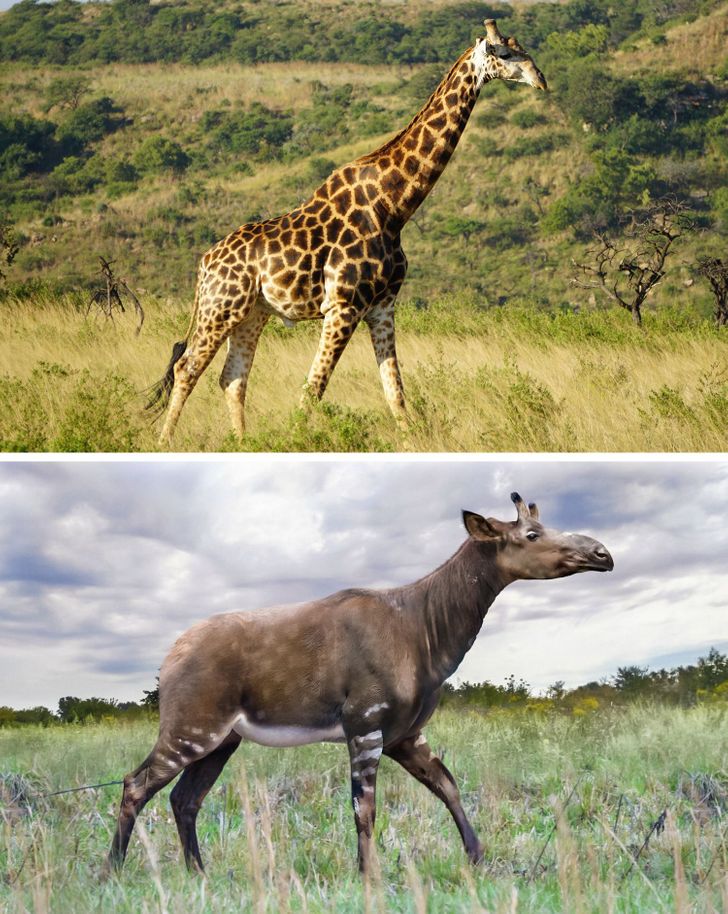 The Samotheriums were prehistoric ancestors of Giraffes. They used to live in the territory of modern Ukraine and Moldova. During that time, these animals did not have such long necks as Giraffe. As a result of evolution, this distinctive part of the future Giraffe’s body appeared later. Scientists believe that the males with the longest necks received more attention from the females. 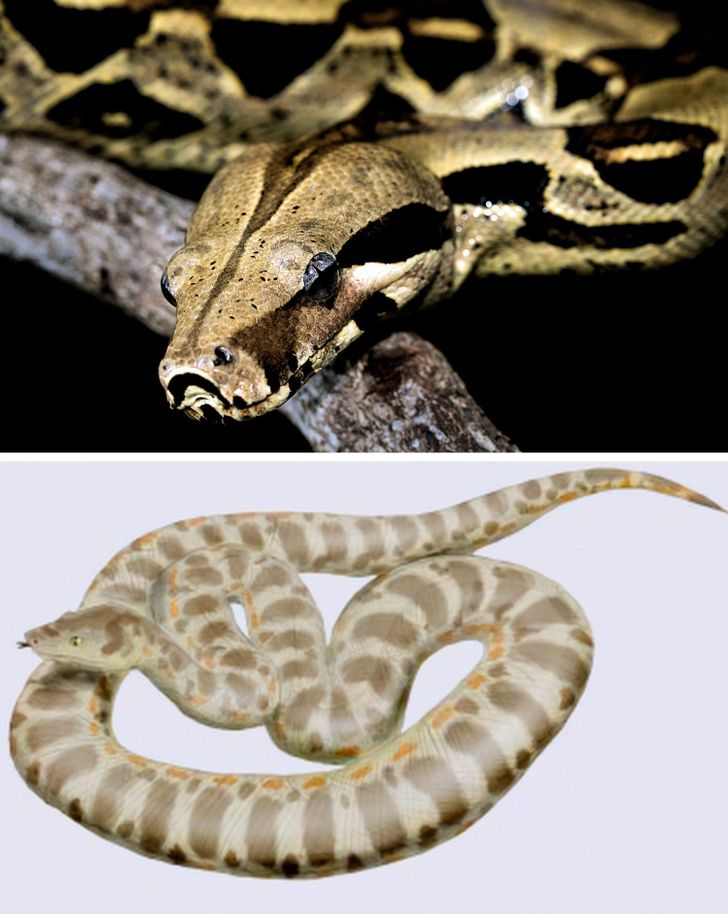 All modern boas have this ancient relative called the formidable Titanoboa which once lived in Latin America. This extinct snake, Titanoboa’s 40-foot length and enormous weight did not prevent it from preserving its surprisingly peaceful personality. It is known that this extinct snake only exclusively fed itself with fish. 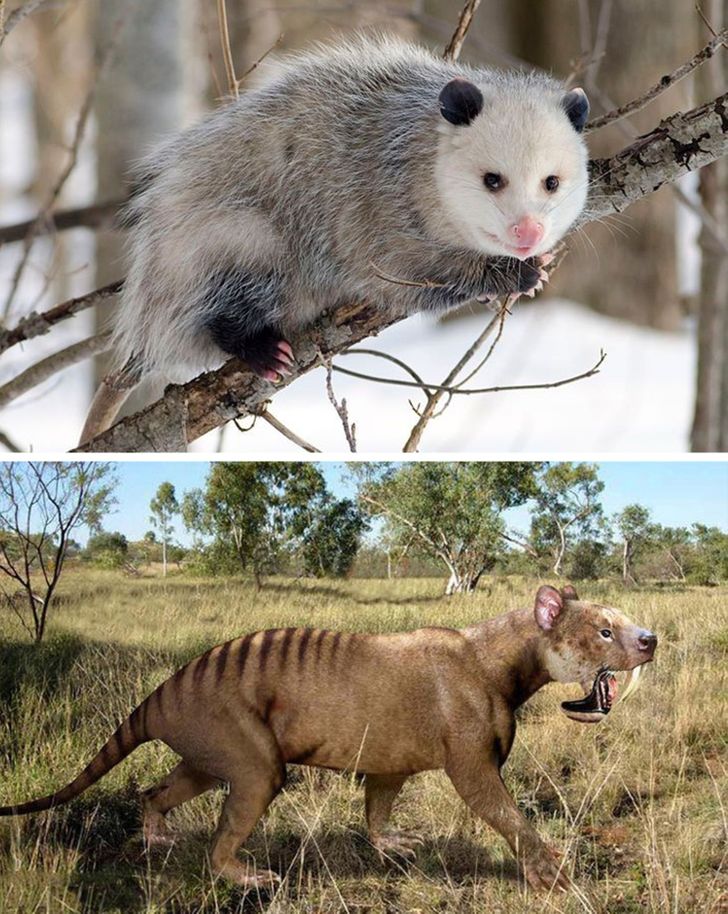 Currently inhabit in both North and South America, this small animal is called Possum. They are harmless animals and are often displayed in zoos. However, the ancestors of this animal would not likely agree to live in that place. Thylacosmilus looked similar to a saber-toothed cat. Thylacosmilus keen hearing compensated for its relatively poor eyesight. It is believed that Thylacosmilus’s upper fangs continued to grow throughout their whole life. The formidable ancestor of possums’ unusual appearance sparked some rumors that they could have survived somehow until now. A creature similar to Thylacosmilus is occasionally seen in Africa, South America, and on the shore of the Sea of Azov. 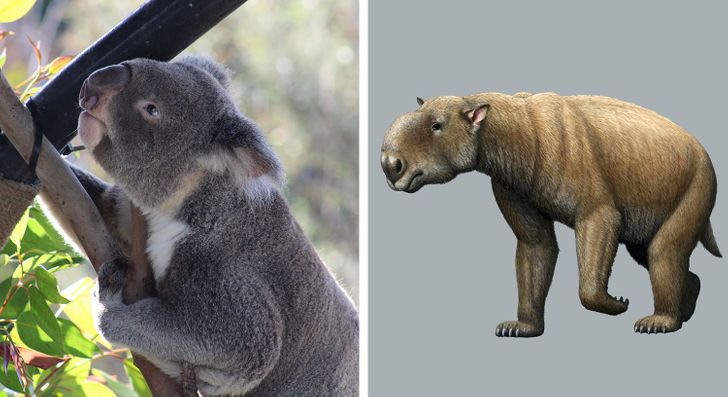 Diprotodons, also known as giant wombats used to be one of the most unusual representatives of the Australian fauna. This animal could reach the size of a modern hippo and could weigh up to 3 tons. Koalas were mistakenly considered the relatives of bears for a very long time but they are actually the descendants of these giant vegetarians today, known as Diprotodons. 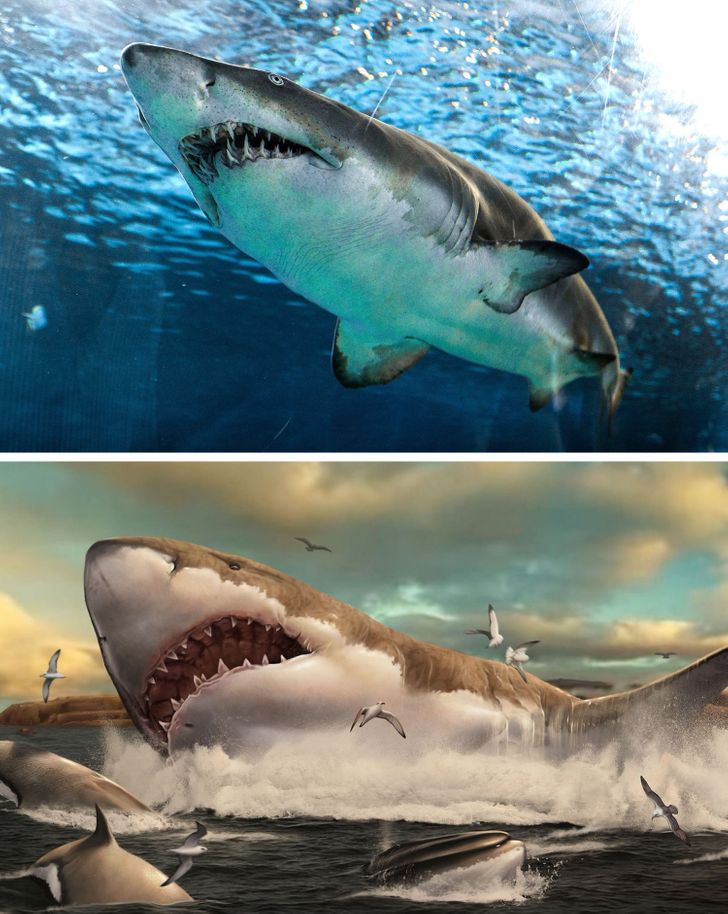 Sharks, the animals that have been considered to be one of the most dangerous aquatic predators for a long time. Their ancestors definitely would look like even more formidable creatures to us. They are known as megalodon. These prehistoric, gigantic sharks sometimes reached the size of a 5-story building and the specifics of the megalodon’s body allowed it to even live in freshwater. 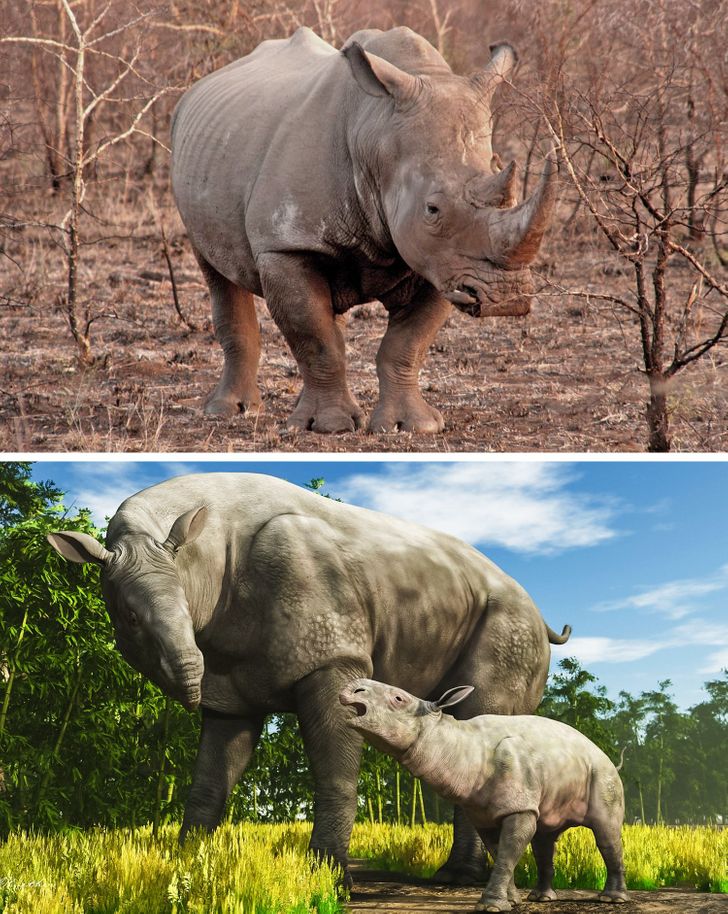 Modern rhinos’ relatives, The Paraceratheriums. Their habitat was located right between China and the Balkans therefore they were mentioned in old Russian fairytales and legends. The creature mentioned in the fairytales not only shows up in history but also in the cinematography. For example, battle vehicles seen in the famous Star Wars movie saga were almost fully copied from the image of this ancient creature. 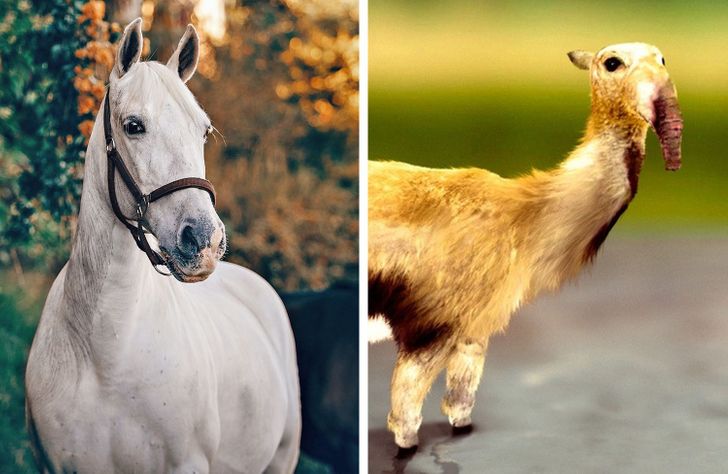 A horse who suddenly lost its trunk as the result of evolution, that is Macrauchenias for you. Similar to an elephant but smaller in size, this animal had a trunk-like body part that the ancient relatives of modern ponies, donkeys, and zebras possessed. Compared to the saber-toothed cats and gigantic koalas, the Macrauchenias looked really strange. 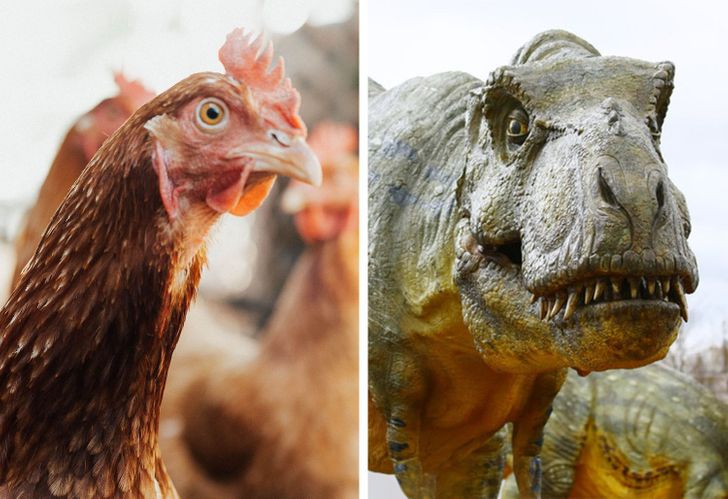 One of the most famous dinosaurs on our planet, The T-Rex. The movie called Jurassic Park made this image of the popular creature from the prehistoric jungle recognizable all over the world. Even though the appearance of this giant dinosaur does not resemble the appearance of a bird at all but the DNA of the Tyrannosaurus says otherwise. It is considerably similar to that of our modern chickens. Today’s scientists are seriously considering the probability that the main scourge of the old planet Earth was in the same bloodline as our feathered friend, the chicken.

These transformations of the animals are so insane. From small sized to crazy big and from formidable to kind. I am totally in shock, especially by the history of evolution of chicken. So, techinally we have been eating dinosaurs?! I can not explain how informative this was for me. Keep scrolling to see the ancestors of our favorite animals… 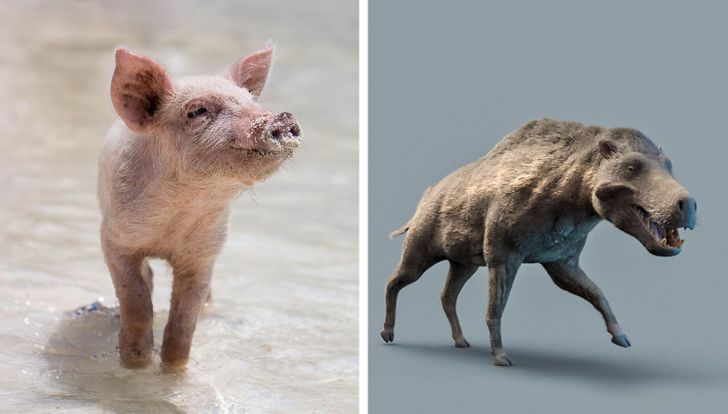 The extinct ancestors of the pig were dangerous creatures that secured food for themselves with the help of sharp fangs and extremely modest intelligence. The terminator pigs, another name for Entelodonts, were enough for these animals to be able to wander the open plains of China, Europe, and North America for many millennia in a row. 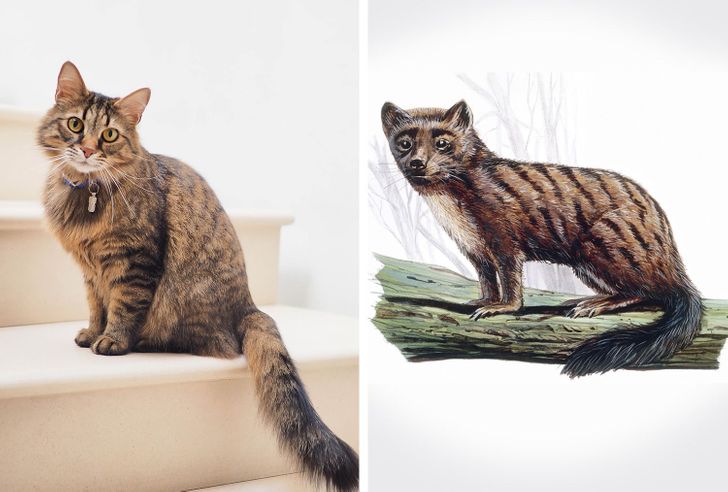 A very long time ago, one of the most popular pets today used too look way different than it does now. The Miacids, our beloved cats’ ancestors. They resemble today’s martens and used to live in the trees, they would only get down if they were looking for prey. Also, these ancient animals are not only ancestors to cats but also to dogs, bears, and even seals. 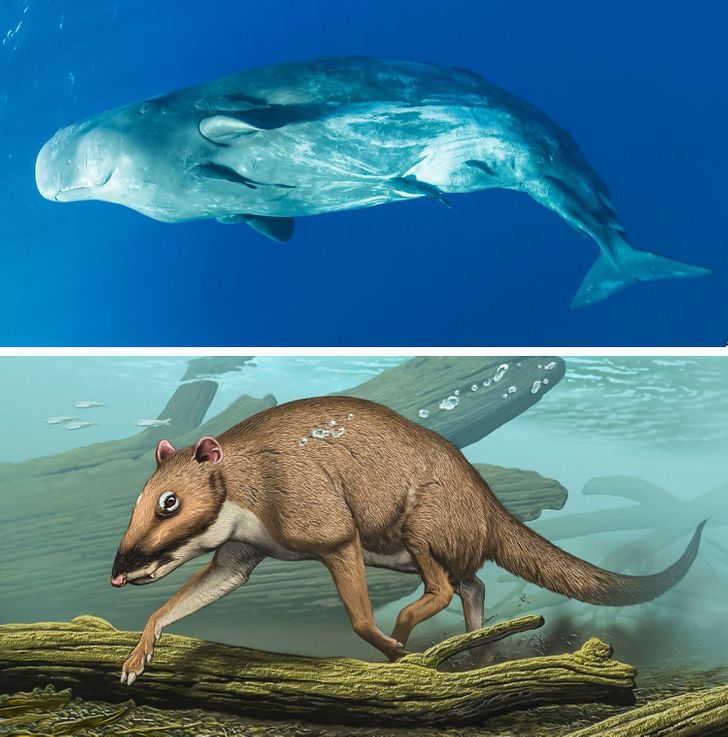 It is commonly known that the blue whale is one of the biggest aquatic mammals on this planet whose length can reach upto 80 feet, however, only few people are aware of the fact that the parent of this aquatic beast is a very small animal called Indohynus. It not only lived on the land, it was also a pure vegetarian. The body shape of the Indohynus changed greatly over time because it had to find protection underwater to hide from predators on the land. 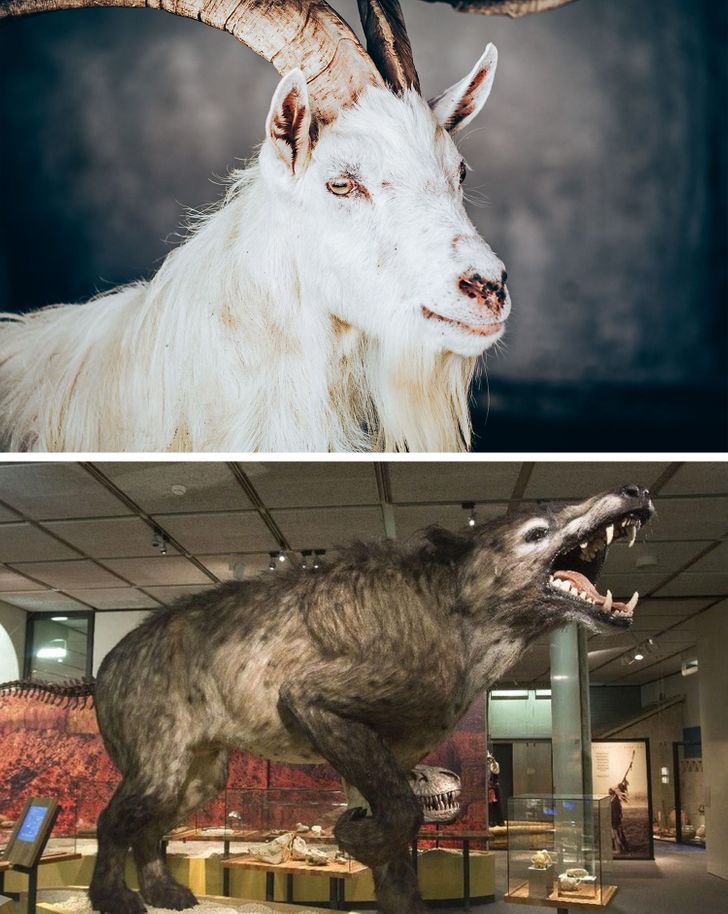 Goats and sheep have been considered one of the kindest and most easily tamed animals since ancient times. Their ancient relative would highly disagree to link with humans so easily. Some time back, this formidable animal, Andrewsarchus was judged to be one of the biggest mammal-predators. Their weight could sometimes reach a ton. 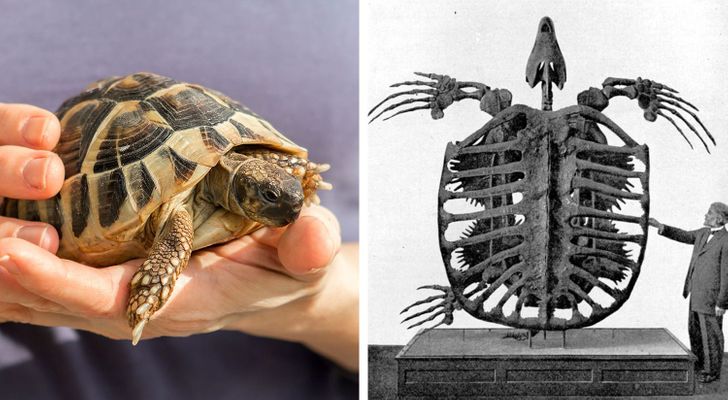 © smuki / depositphotos.com, © Frederic A. Lucas – “Animals of the past” / Wikipedia

Archelons were really giants, like true giants of the animal world. Their weight could reach the weight of modern elephants. Even though giant tortoises died approximately more than 60 million years ago, their big species still can be seen in the Indian Ocean and on the shores of North America. Scientists are very doubtful about it, though. They say that it is very strange that these species come from the era of dinosaurs because they would not have been able to survive it. 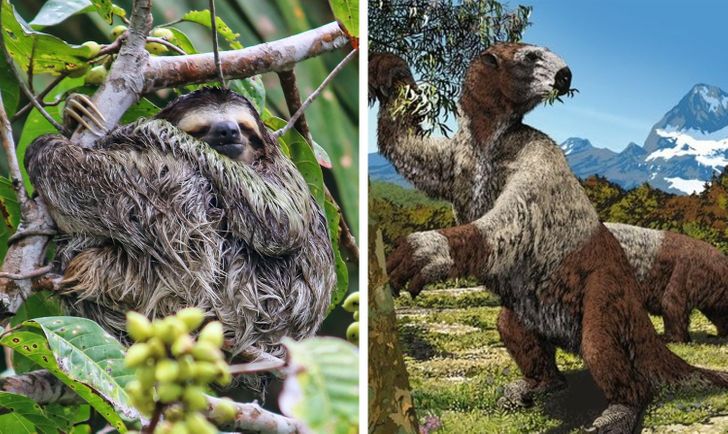 The sloths got the name that they have for a reason. These slow, dull and kind animals spend most of their lifetime sleeping. Although, their giant ancestors also could not boast a quick reaction. The Megatheriums were not only as big as modern elephants, they could also weigh approximately up to or more than 4 tons.

Yeah, we all want to be sloths. Did you find this informative? Which animal’s crazy evolution shocked you the most? Let us know in the comments down below…