Are you a big fan of the Avengers series? And excited to see your favorite character reimagined as the new Japanese warriors? If your answer is yes, then you are at the right place. Today’s topic is something more thrilling and exciting and we can’t wait to share these illustrations with you!

This new series of superhero images by Japanese illustrator Takumi combines modern culture and the traditional Ukiyo-e art form. Since Avengers: Endgame just came out, this brilliant fantasy fan decided to recreate each of the film’s iconic characters as actual Japanese woodblock prints. This series includes almost all casts from Avengers: Endgame and you will find The Avengers, including Captain America, Thor, Hulk, and Black Widow in a new look and new theme. These characters have been imaginatively recreated as powerful Japanese warriors. For each character, Takumi has reimagined their superhero attire with Japanese patterns and themes. As a tribute to his distinctive shield, Captain America’s hakama pants include the Buddhist Shippo pattern. Hulk is depicted as a sumo wrestler, while Iron Man wears a complex Bishamon Kikko design that resembles a circuit board.

We’re sure you’re wondering how this artist managed to re-imagine our superheroes in ukiyo-e woodblock style. These breathtaking works of art are sure to inspire you. Scroll down to see what the Avengers would look like if they were created in a Japanese Style!

Traditional Ukiyo-e art was used by Takumi to depict each of the Avengers characters and their supervillains.

1. Captain Marvel as a Japanese Warrior! 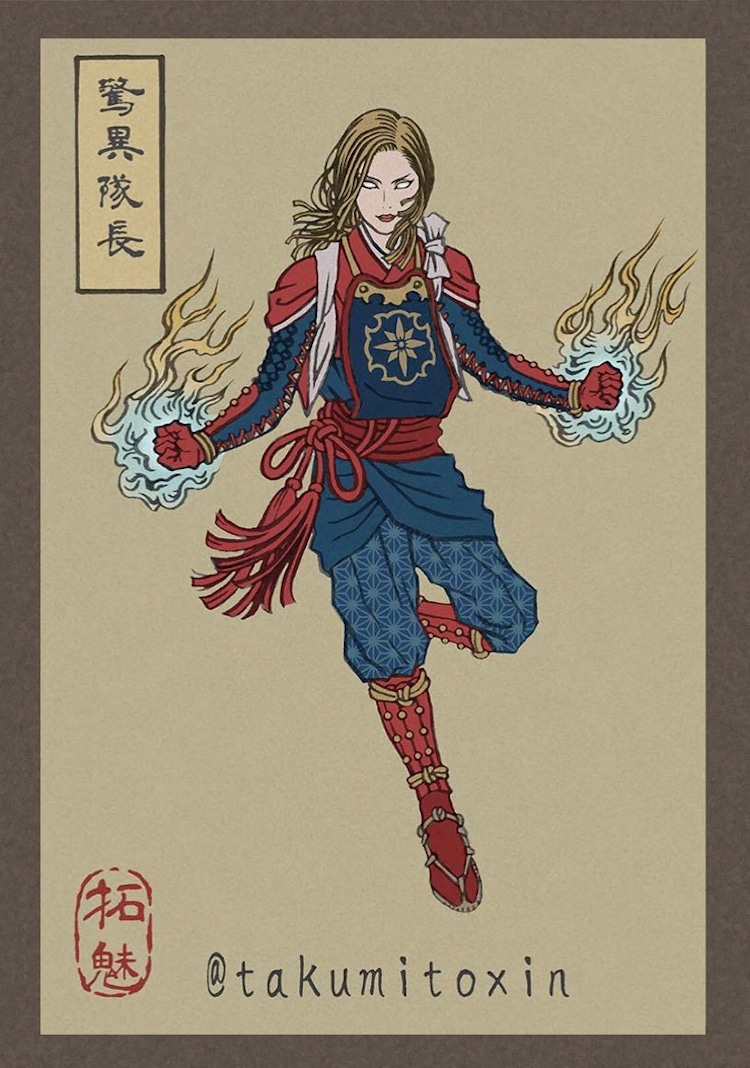 This artist’s depiction of Captain Marvel’s face shows a fierce expression. She appears to be a completely new woman. Incredible!

2. The HULK as a Sumo Wrestler! 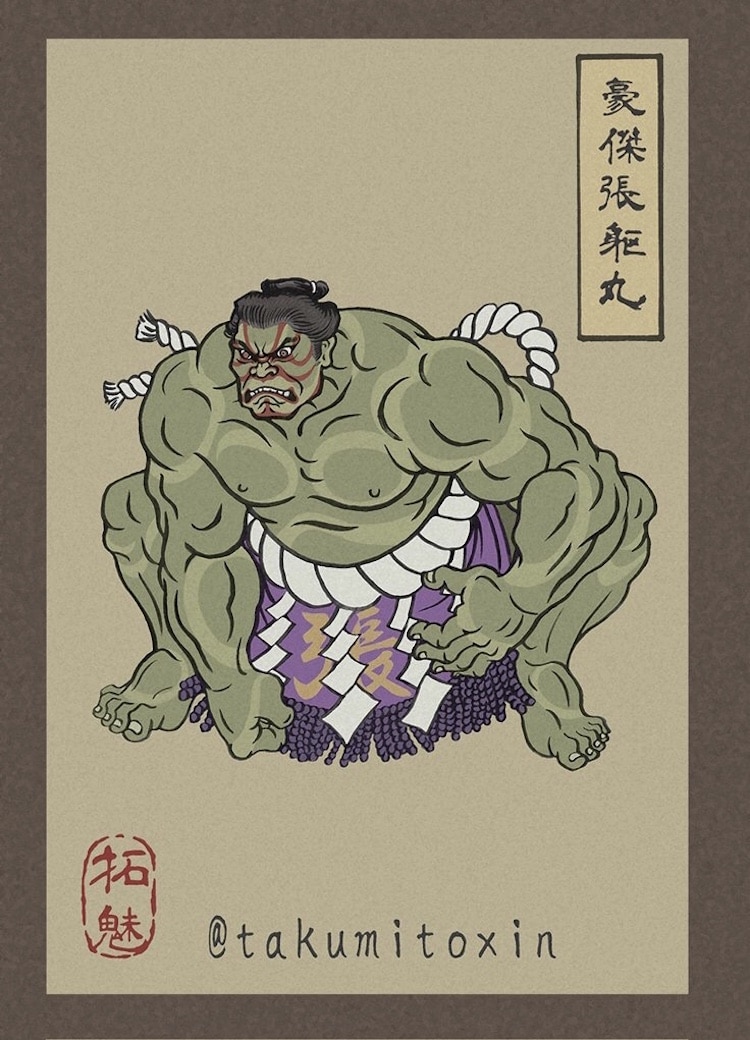 Like a Sumo Wrestler, the Hulk is now even more powerful than before.

Each character has Takumi’s version of their superhero suit, which includes Japanese patterns and symbols.

3. Iron Man is wearing a costume with the complex Bishamon Kikko pattern. 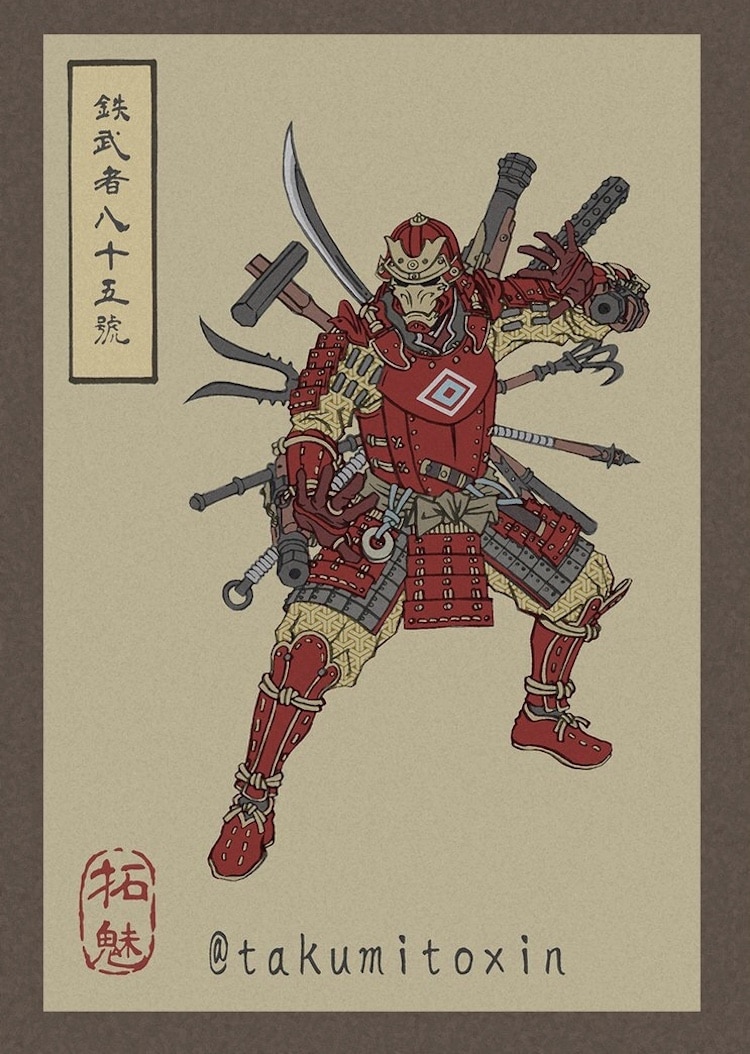 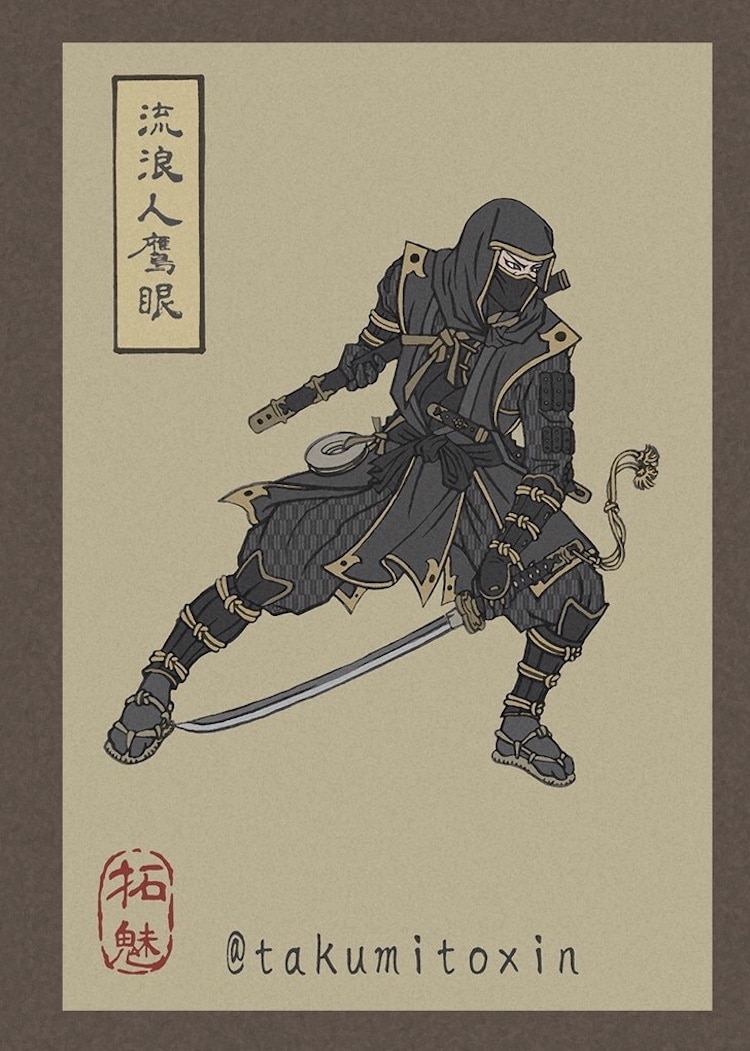 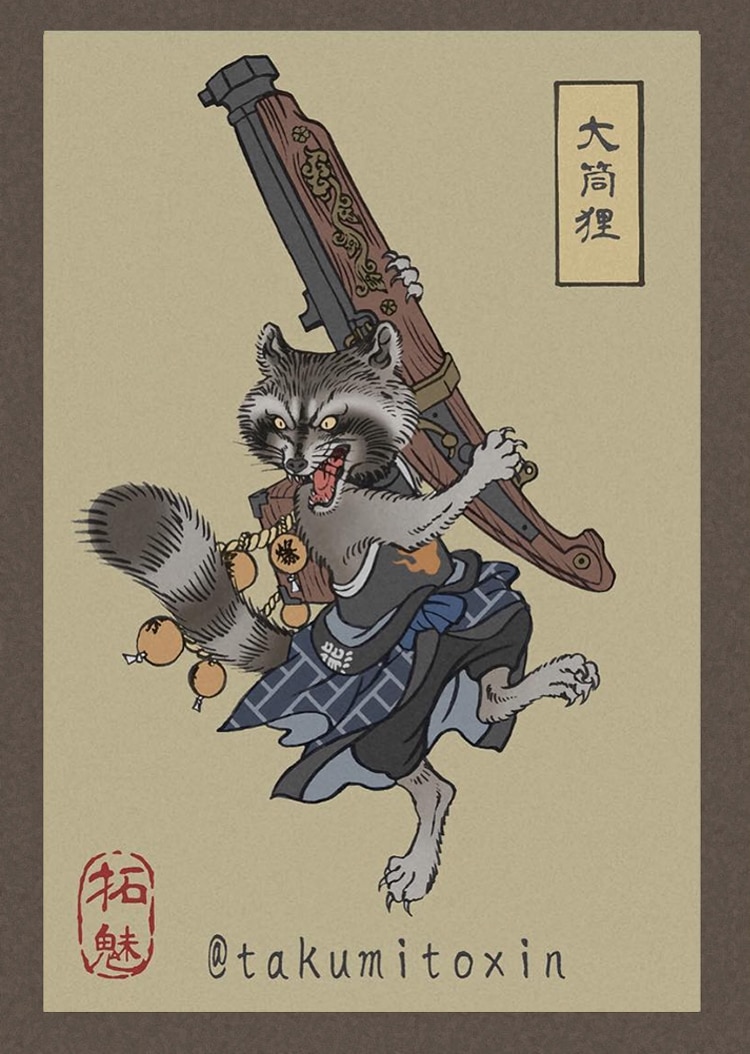 Although Rocket Raccoons are tiny and small in height, their impact is enormous and huge. 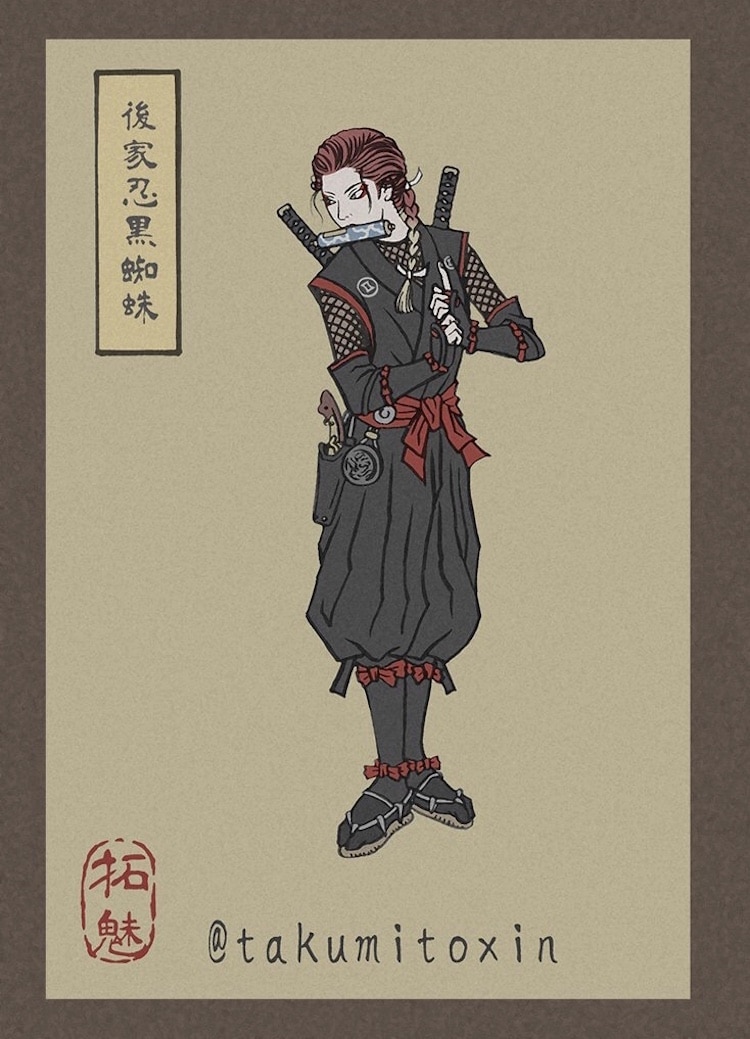 The Ninja role of the Black Widow is a good fit.

7. Thor as Japanese God of Thunder! 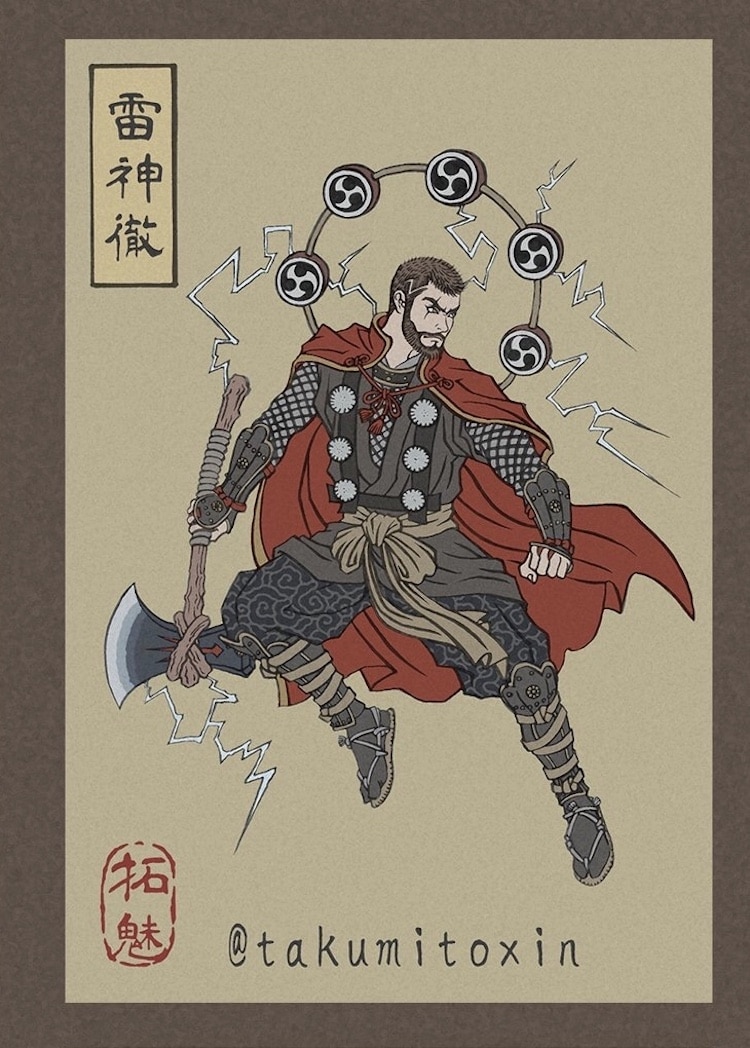 With his well-groomed beard and haircut, Thor appears to be the legendary Raijin thunder deity. 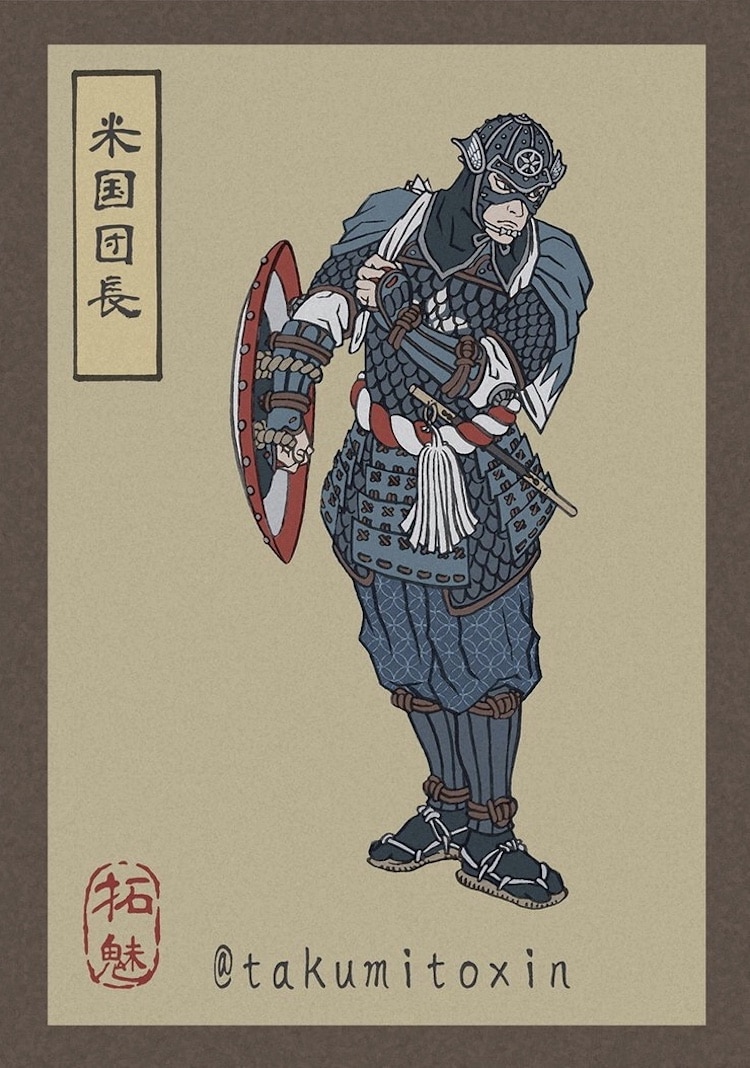 Captain America and the rest of the Avengers look like samurai warriors. Remember the old samurai figures we used to watch in our childhood? This series of illustrations bring flashbacks of those old characters. And we are inspired by how Takumi has combined both Japanese theme and style with Avengers. It brings a throwback to their earlier samurai-style figures.

Don’t forget to pour in your suggestions and thoughts about this series of artwork in the comment section below. Also, if you have a friend who is a die-hard fan of the Avengers, then share these incredible illustrations with them.