And usually leaves very late. It is in human nature to wanna enjoy holidays as much and for as long as possible. So it is no surprise that celebrations like Christmas, Thanksgiving, and Halloween can still be felt days after the initial date. We are all also aware that big corporations love to market things related to these holidays even after all of it is finished. How else will they gouge their customers for everything they have.

Well, this particular coffee shop didn’t think so. Technically the barista is the problem here. I know that customers can be very hard on service workers and it is not okay to be rude towards them but it goes both ways. This particular barista clearly had a bad day or something because he was hell-bent on destroying any moment of happiness that people felt in that coffee shop.

Rather than sucking it up and making a simple hot chocolate, he decided to be a complete douche and reject the order since it wasn’t Christmas anymore. You can read the whole story by scrolling below and taking a look for yourself.

The customer wasn’t being difficult since they were still advertising the drink. 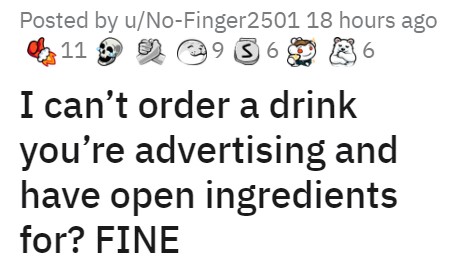 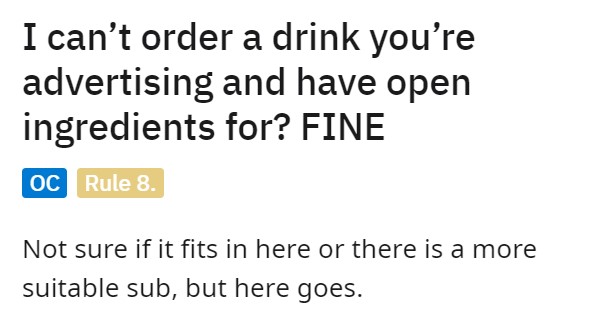 And it wasn’t as if it was months later, it had only been a few days since Christmas.

I can understand that someone might be having a bad day but that doesn’t give him free rein to act however he likes. 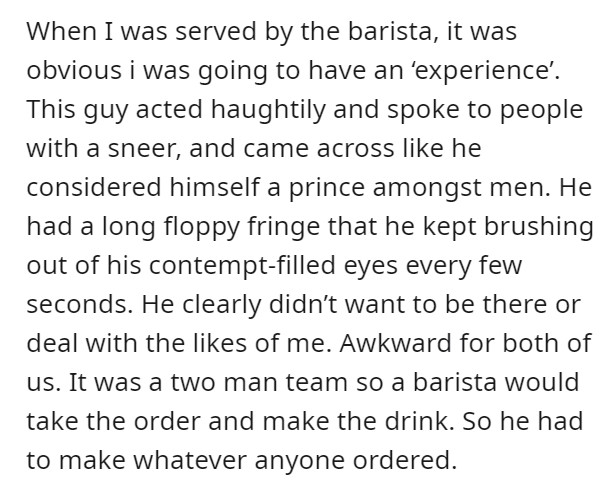 Why did he look you up and down? That is an important question here. 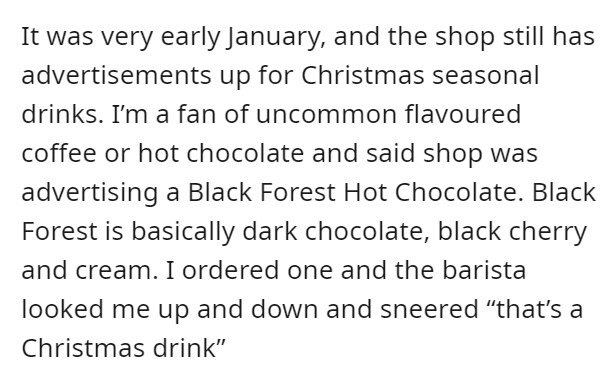 Is pumping a flavored syrup really that hard in a cup of hot chocolate? 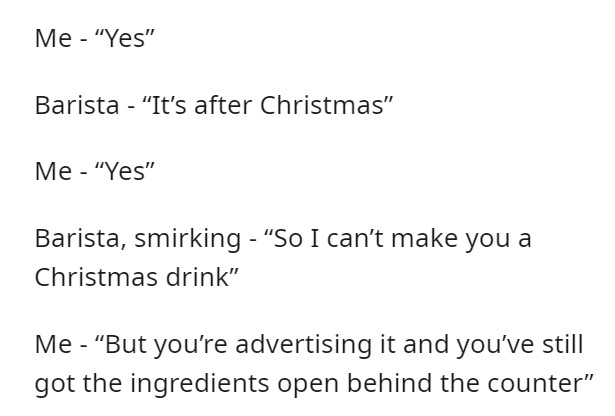 I wasn’t even there and this guy is getting on my nerves. 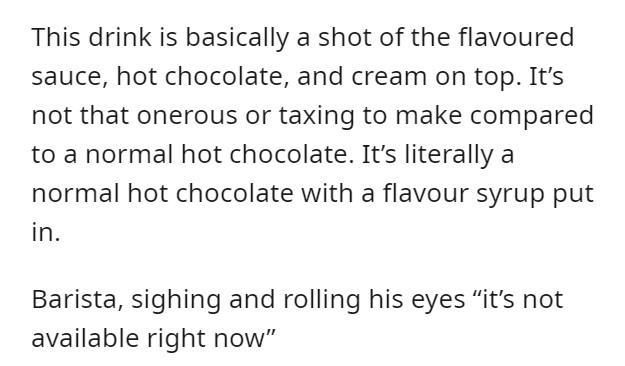 So this person decided to do it themselves. After all, they really wanted that drink. 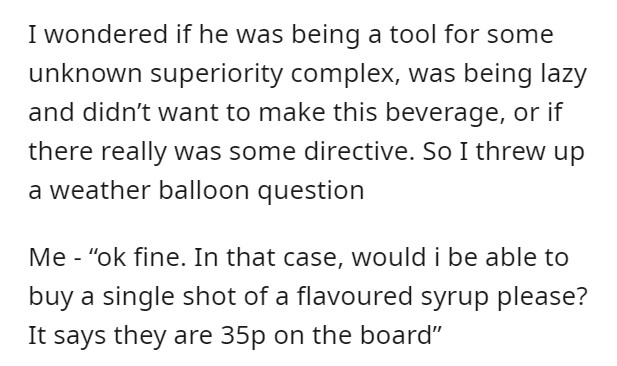 How does one contemptuously place a drink in front of someone? I have clearly not been to enough coffee shops. 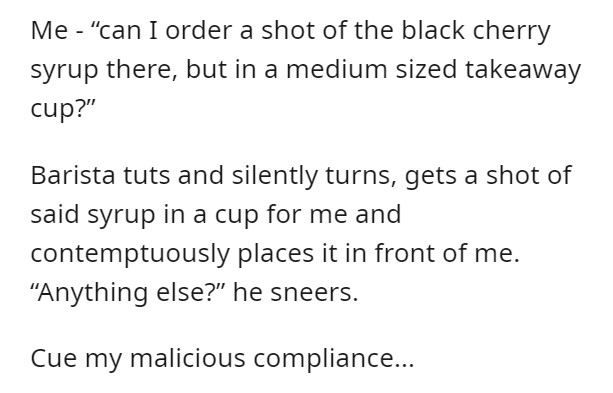 I mean they did nothing wrong but I bet the barista wasn’t fond of how this all turned out. 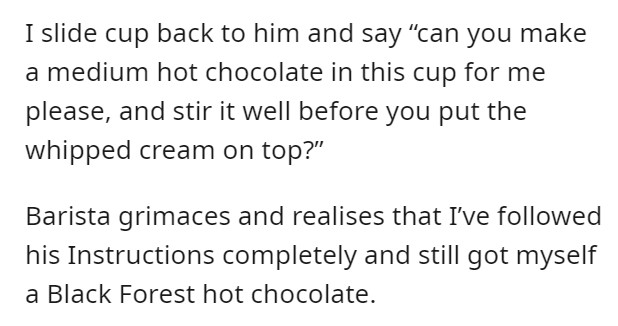 Now I am in the mood for some black forest hot chocolate. Granted I can’t get one where I live even if I wanted to.

I think that is the way to go when it comes to dealing with these sorts of situations. 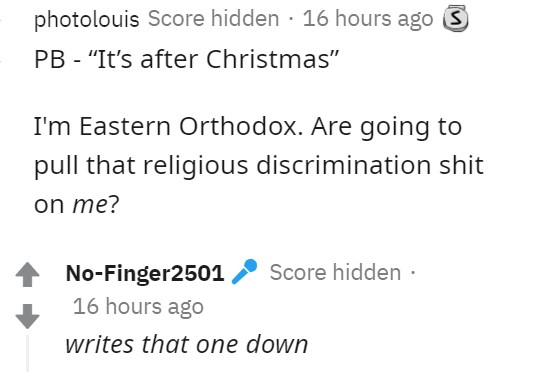 So there are Chads and Karens but what is this guy called? Contemptuous barista? 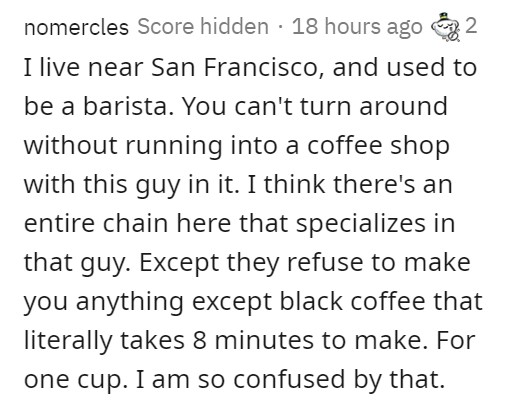 This is why I like making my own coffee at home. 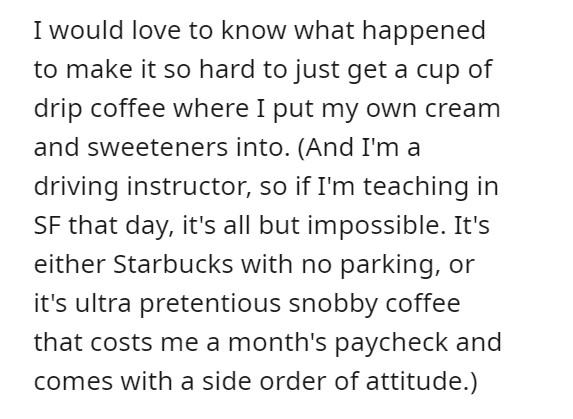 This is not really related but your comment about being a driving instructor made me think about my high school driver’s Ed teacher. He had a small coffee pot in his class that he would always make a fresh batch of coffee every morning. I never much liked coffee but man that stuff smelled amazing.

He was a really awesome bear of a man and would let students have a cup once in a while if they asked nicely and had been performing well. He also used to put traffic cones on top of your car as a ‘dunce cap’ if you screwed up out on the driving range. –Thistlefizz

What do you like to do when it comes to your morning coffee? Would you rather go to a shop or make it at home so you don’t have to deal with humans? Comment down below and let us know.