There is a limit to how fresh you can get things.

The only way you can get the freshest of the fresh is if you eat everything raw and the moment it is pulled out of the ground. Now, don’t get me wrong, nobody likes to eat stale food, and even I ask for fresh stuff when I go to a vendor or a restaurant but there should be a limit on how rude you can be.

However, this is where Karens and entitled people come in. Not only are they rude to the people serving them but demand unreasonable things most of the time. It’s like their brains don’t work most of the time. That’s the only excuse I can come up with for how this particular lady acted.

Wanting fresh donuts and wanting donuts straight out of the oil before they have even cooled down are two different things. But she learned this the hard way.

I can’t deny that even I am addicted to Rslash. 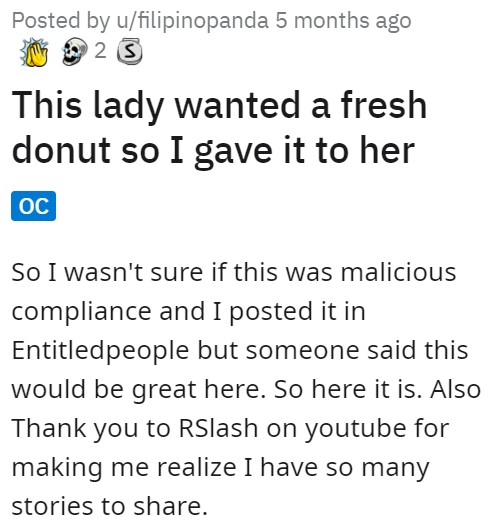 First, we have a bit of background on why she was there in the first place. 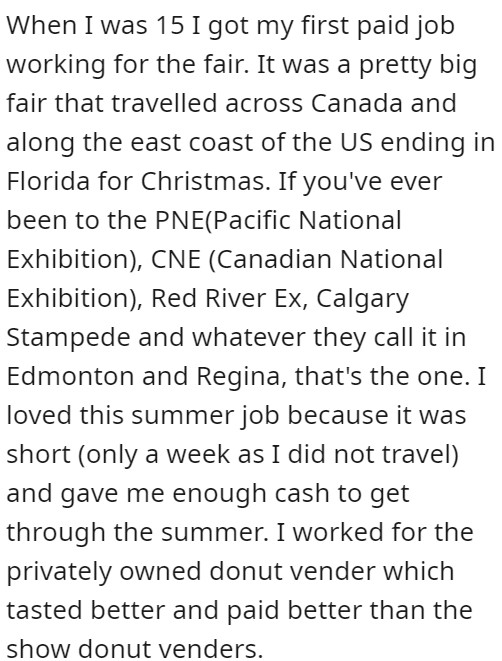 She had worked at the donut vendor for a long time. 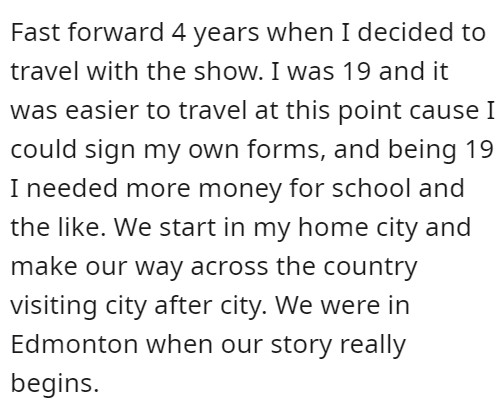 Things were going well but we all know happiness doesn’t last forever. 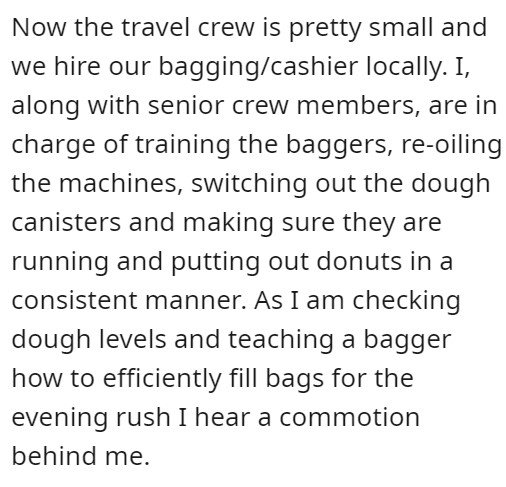 Even I would have the common sense to realize they aren’t lying. 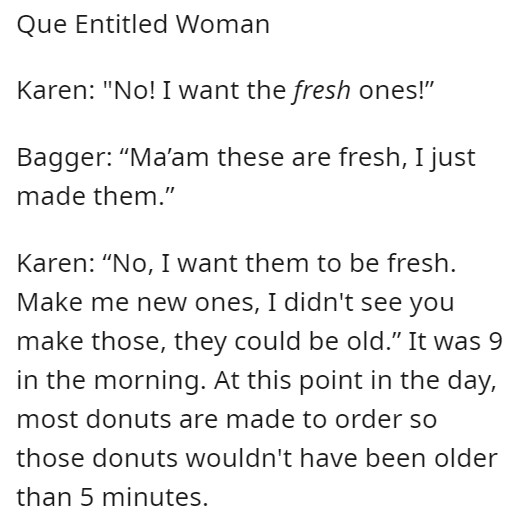 Is it bad that I really want donuts now? 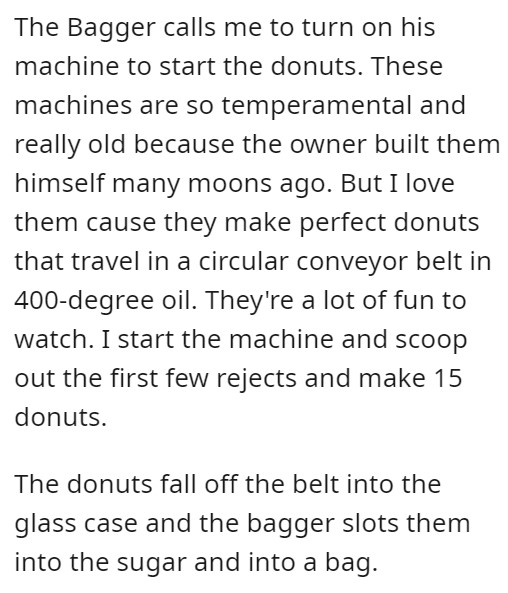 This is not raw meat and cooked meat. Touching is fine in this sense. 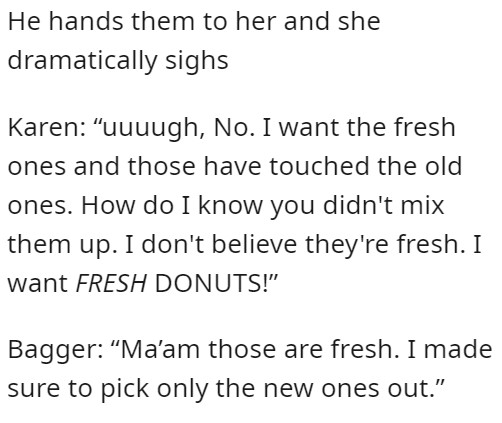 I would have kicked her there and then but this girl preserved and made more donuts. 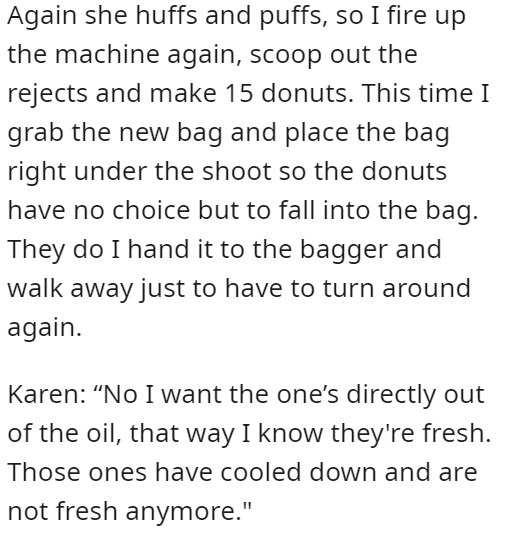 I don’t understand these freshness police customers, man. I worked at a bar that served pizza and there were a couple of fresh heads that would insist you give them THE freshest slices. Even THEN, they’d look at the slices before them (kept in a heater and in my experience, still plenty fucking hot), and ask when the NEXT pie is coming out. Even though my freshest pie just came out minutes ago.

The nerve! And what, other people are supposed to eat this “sub par” pizza? You’re better than those people? Some pricks just want to feel special I guess. –ScarletSpider2012

Apparently even that was not enough for her and she wanted her mouth burned. 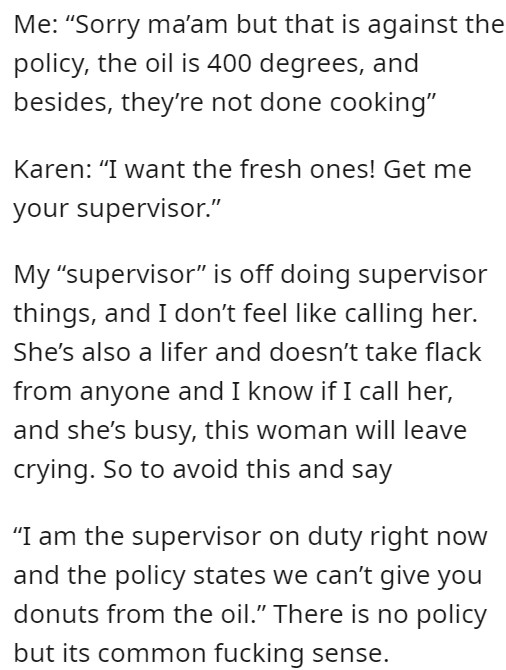 This girl realized this woman was dumb and decided to make her ‘fresh’ donuts. 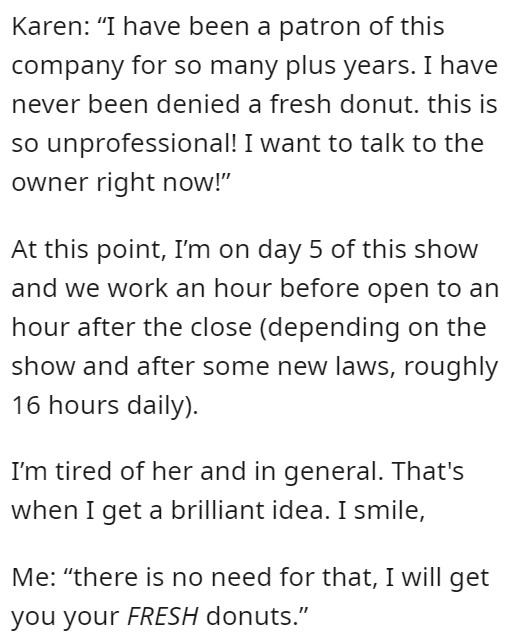 You don’t understand, she wants the fresh 400 degree ones. She can’t sue you for letting her burn herself if you give her the cooled down ones! –Th4tRedditorII

Now, this is what I call sweet revenge. 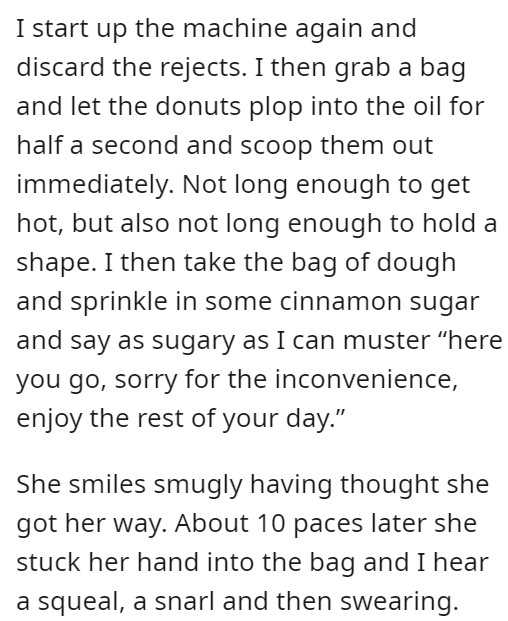 Thankfully someone else stepped in before this Karen ripped her hair out. 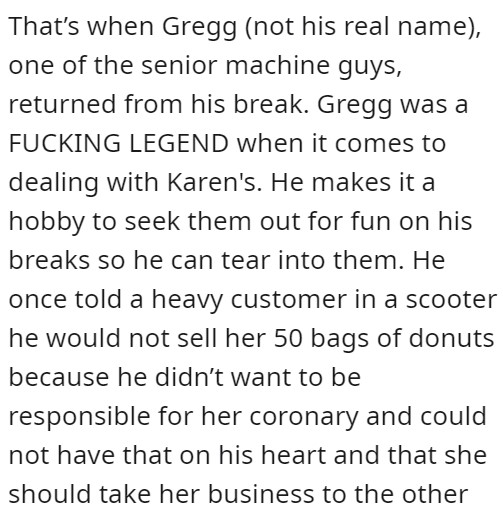 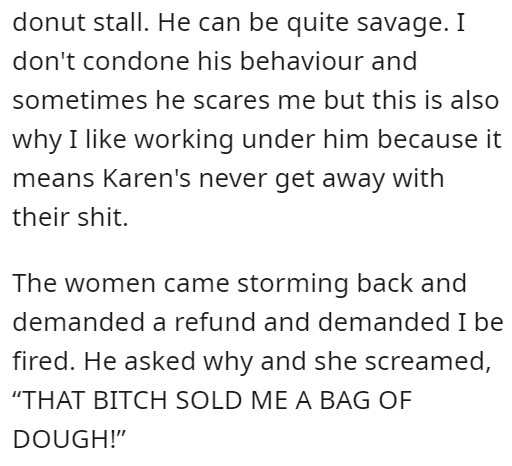 And let’s just say Gregg is truly amazing at dealing with people like these. 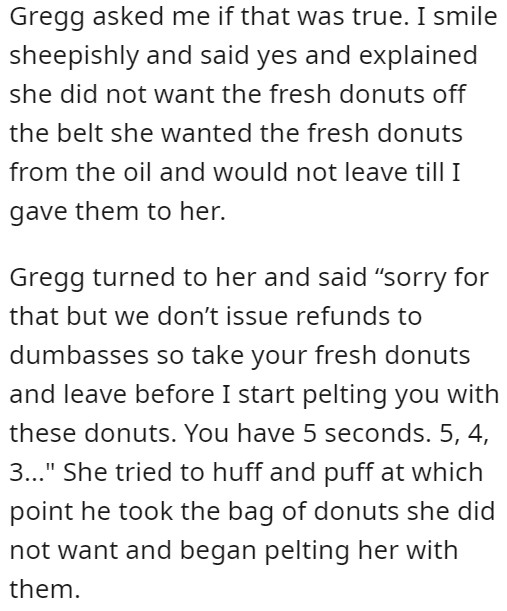 She even made extra money so it was all fine in the end.

Would you ever treat someone like this just because you wanted something fresh? Comment down below and let us know.