Dogs are very loyal. Unless someone gifts them deer bones.

We all know no one is better than a dog when it comes to being loyal. They give us their everything. When a person adopts a pet dog, that person is basically giving it a new home to live in. A home where it can grow, have its favorite treats, play in the garden, make friends in the neighborhood, feel loved and secured, and so much more. A dog realizes all that. And no, the message does not go across as ‘favors’, it goes across as ‘love’. And that is how loyalty forms.

Loyalty is very natural for dogs. You could say, it was built in their behavior and they were given a key to unlock it on will, for anyone they considered worthy of a dog’s loyalty or trust. A lot of dog owners out there may know about the fact that dogs have this thing called a pack mentality. For those of us who don’t know what that means, it means that dogs are very social. They love being in the company of other animals. And this pack mentality makes is exactly what causes them to be loyal to their humans.

Here’s another crazy thing about these adorably loyal creatures. Their sense of smell is absolutely amazing. When a strong, inseparable connection is established between a dog and its owner, its owner’s scent is what instantly excites them. All the positive emotions in a dog’s brain lit up when it smells the scent of its owner. You could call it their love trigger. So yeah, dogs are not senseless,  they recognize you.

But! Why does there always have to be a but. Our cute and brave good boys have self-employe themselves to make the whole internet laugh during our dim days. They don’t even try and, mainly it’s just them being their naturally dumb selves. The story I have got today, which obviously involves a dog, is going to make your brain churn in all sorts of ways.

Today we’ve got a story shared by this dog owner whose dog got bribed by a bear to access their trash can..

Well. Where do I begin. Everything is super weird about this story. Apparently, in Ontario, Canada black bears love raiding random people’s trash cans. A bear? A trashcan? So they don’t raid animals anymore? Anyways, this one black bear had been raiding very specific trash can belong to one house, for many days. The house even has a dog but the doggo had been finding it really hard, lately, to perform his rightful duties.

The reason, you ask? That’s because every time the bear would come to the house t raid their trashcan, it would also bring a deer’s bone for the dog as a bribe. Black bears are not known for killing deers in Ontario, Canada so it still is a mystery how that bear got its paws on those bones. But one thing is for sure, it was doing the job.

When the dog owner Jesse found out about all this, he decided to share the whole story of his dog who he says is very nice and sweet most of the time, taking bribes from a bear, on the internet.

Scroll down below to see how it unfolds.

Ladies and Gentlemen, the culprit who had been taking bribes from a bear. 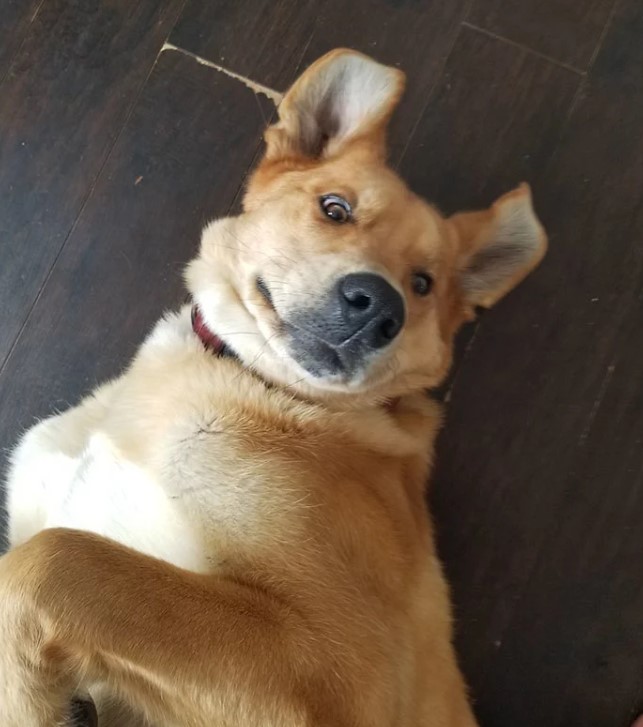 This dog probably is the most adorable dog in the world. I could not have guessed that this good boy was a culprit. Just look at those innocent eyes that are demanding, belly rubs. I guess that’s how the owners were being deceived too.

But the poor guy only wanted deer bones. Only if you had provided them before. 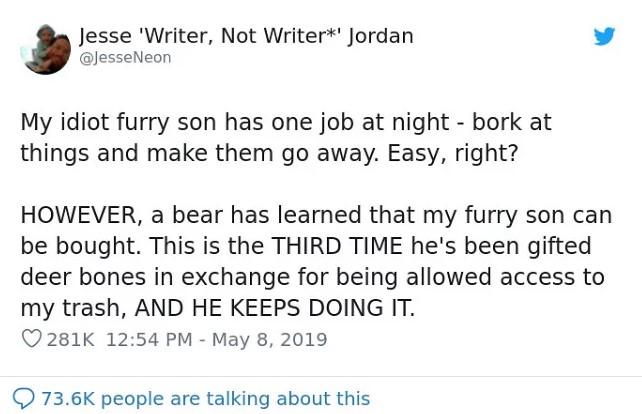 Well, the winner takes all, right? Just random, out-of-the-blue advice, but had you paid that dog $14.25 per hour, maybe he wouldn’t have submitted to the bear. Just a random thought, nothing personal.

Who wouldn’t accept that as a bribe? Those are some yummy-looking deer bones. 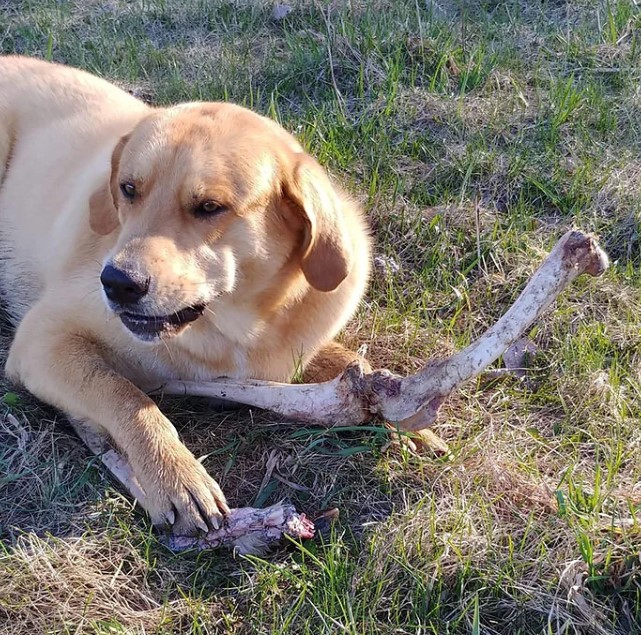 When you get a treat that fancy, no duty feels more important. Look at that doggo being caught red-pawwed and his expressions are like ‘so what?”. 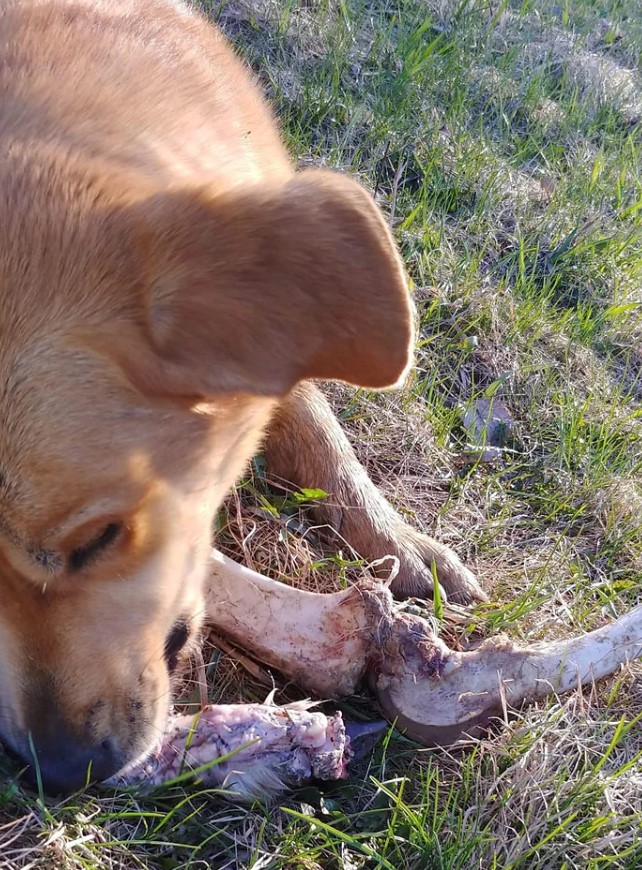 It looks like the deer had been hitting all the right spots. Jesse’s son looks so invested in those deer bones, he wouldn’t mind a bear occasionally coming in for some trashcan raids. It is trash after all, no?

Here’s all the debris. 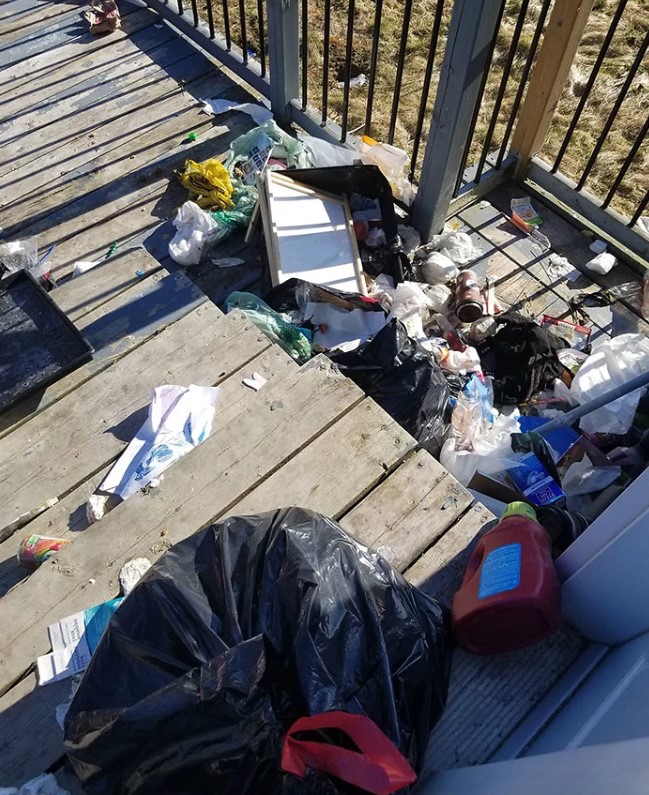 Unfortunately, the bear was never caught in action. Imagine catching both culprits making the deal. That would’ve been fun to look at.

A healthy choice for the whole house and everyone living in it. 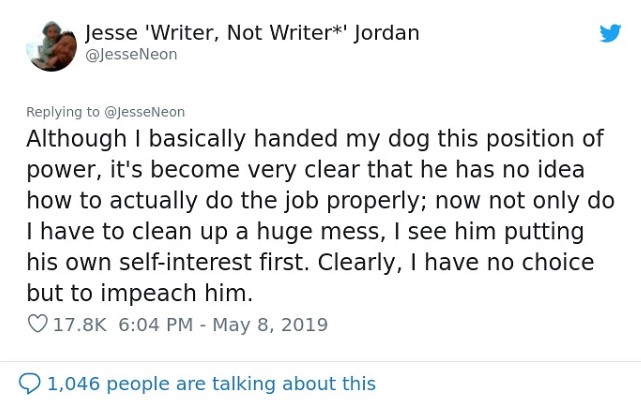 After all, all that adorableness deserves to stay inside and have fun, and not be appointed as some house guard. Just look at those eyes. 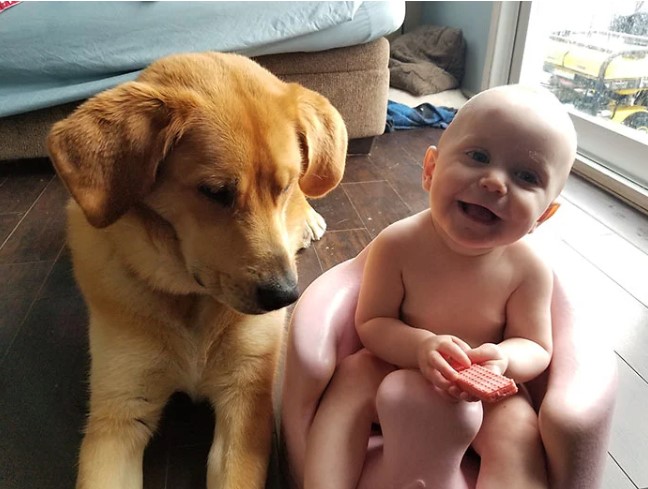 That baby looks so happy that his dog got impeached. The little one can finally play with his dog as much as he wants. So, the decision turned out fine, right?

The way Jesse just described Brick, it’s really hard to believe what the doggo did. 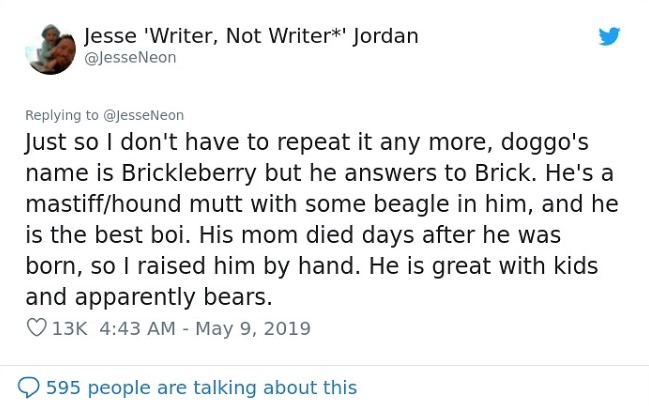 The way Jesse describes he has been caring for the dog, it speaks volumes about how loyal the dog must be to him. But, come on. I mean, even the hardest of people or animals have a sweet spot. You just who might tap it.

Awww! I don’t think anyone who possesses a soul can get angry at this dog. So cute! 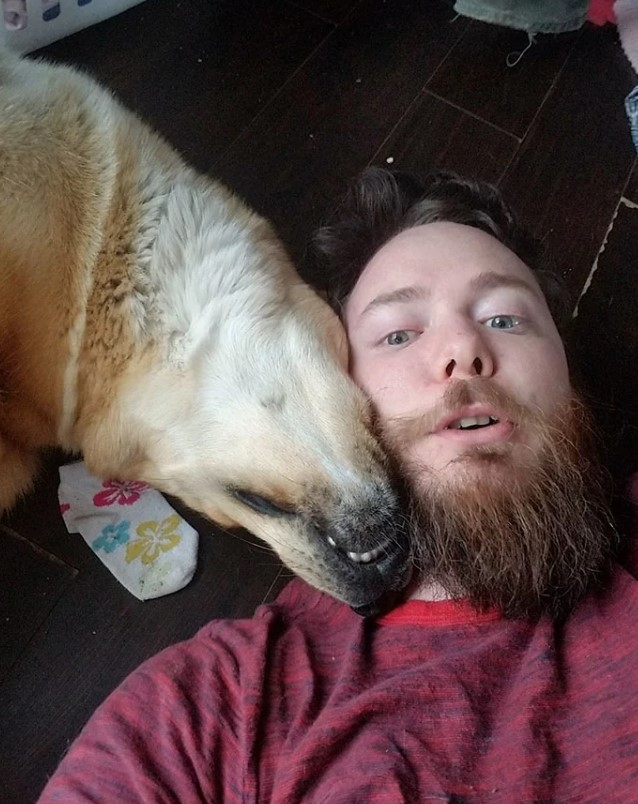 Phew! Thank god for that. 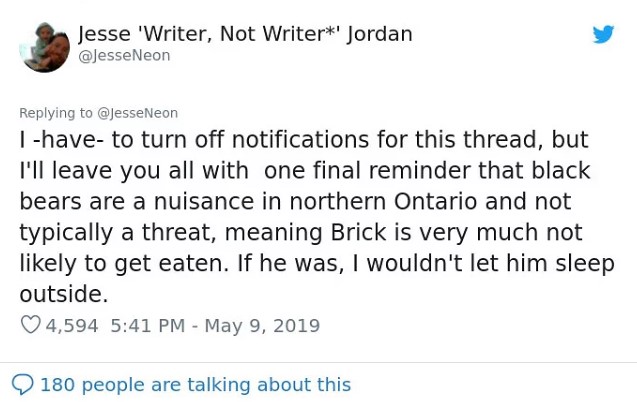 I think when you share something on the internet, you are allowing others to have opinions on it, question what you have posted, and even demand as to why did they make the post. So, I believe it was right of Jesse to explain that the black bear was not harmful. No one would want to put their baby in danger.

Oh, and yes, the internet was very keen to get involved. As of today, that Twitter post has over 300,000 likes and almost 80,000 retweets. On top of that, Jesse has around 3500 followers on his Twitter account so the post was bound to attract an audience.

Here’s what the internet had to say:

Capital does always fly in the direction of the highest reward. 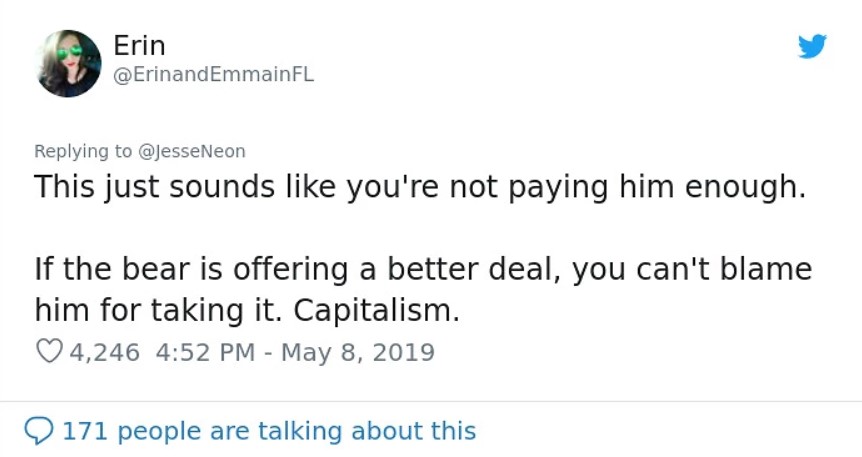 How else would you protect and attack if you aren’t properly fed?

Some raised their voices for basic dog rights.

Probably a contrasting one. That’s what’s in these days, right?

This person questioned the safety of the dog… 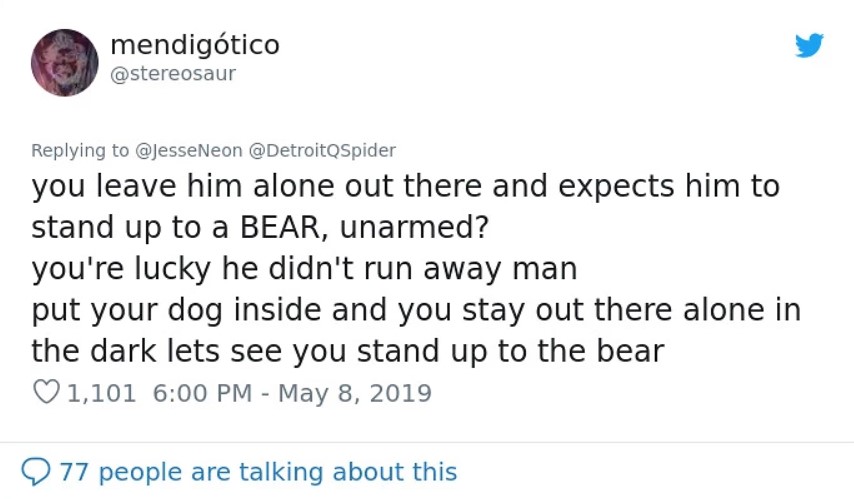 …but Jesse was quick to point out that the dog was not in danger at all. 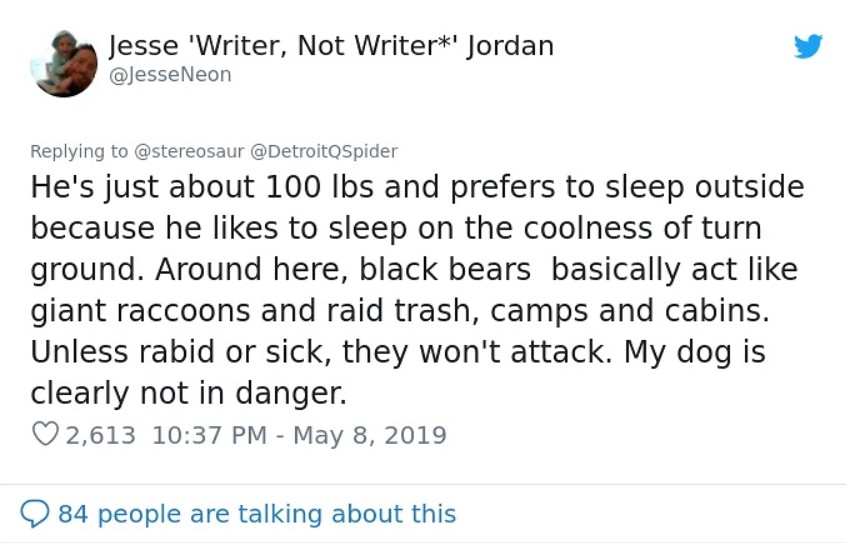 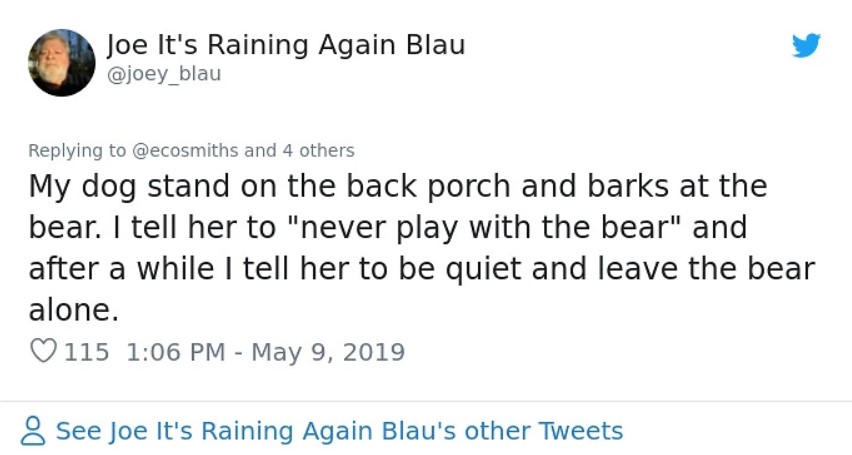 Some people just had a nice laugh over the whole situation. And I believe that is why Jesse shared this story in the first place, to make others enjoy. 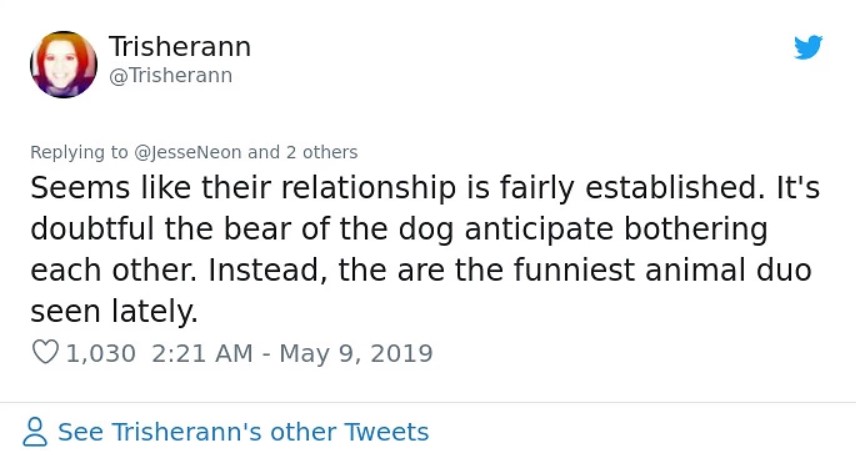 And there were many who supported Jesse too. 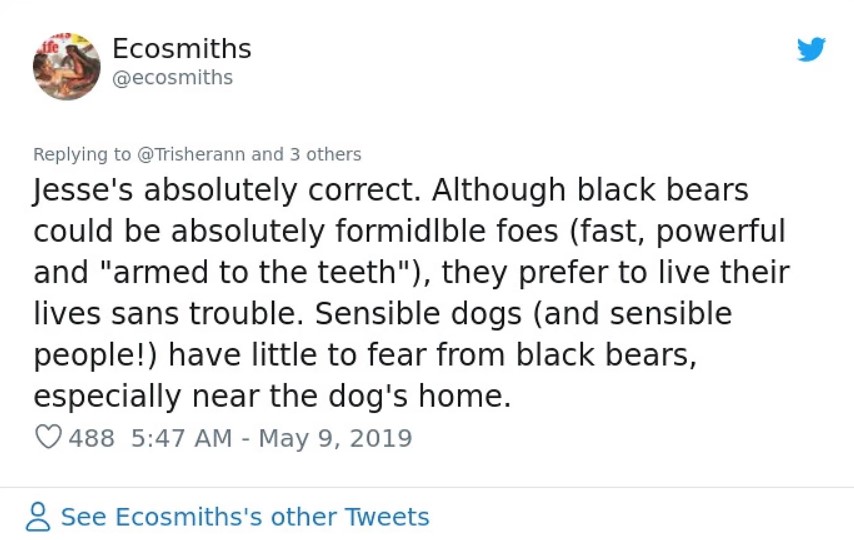 Let’s hope Brick didn’t get a big-ass lecture. I am very sure both the owner and the dog are very smart. As Jesse mentioned, he would have never sent the dog outside had he sensed danger. So everything is cool.

I hope you guys enjoyed this story. Feel free to share it with your mates. And don’t forget to let us know how you guys felt, in the comments section down below.