There are uncountable amounts of funny and infuriating workplace stories that we get to read every now and then, most of them are of the bosses being unfair towards their employees. It is no surprise that this story is kind of similar, it is so sad that this type of environment has become normal in every workplace. Employees are treated very poorly as if they are lesser humans and employers take advantage of their helplessness because they know how badly they need that job. Just because the employer has the authority, it does not give them the right to exploit or mistreat their employees.

We came across a story of an employee who just started working at their job when his boss literally forced him to join the company’s kart race event and he had to spend his own money for it. The employee already had other plans on the night of the event but the boss indirectly threatened to fire him if he refuses to go. The helpless employee agrees because his job depended on it but what he does next will give you a relieving satisfaction and laughter. Keep on scrolling down to read the whole story in his own words…

1. He started by giving a few background details. 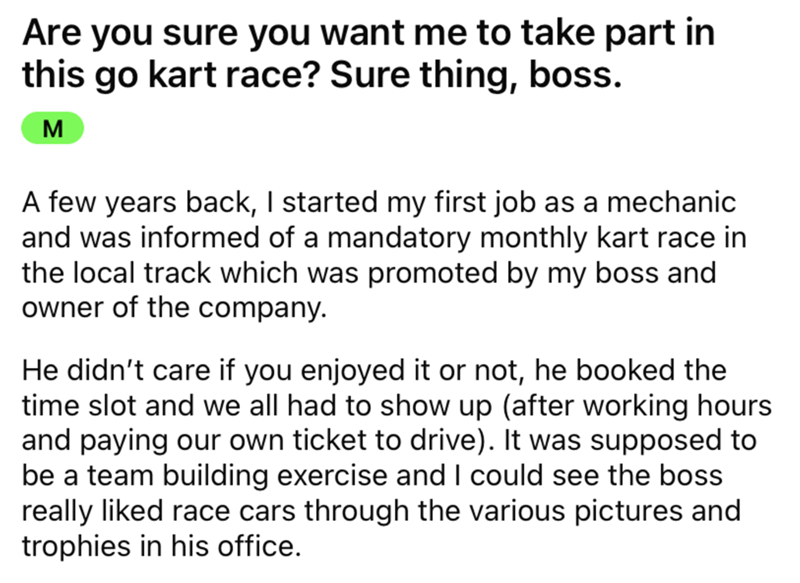 2. He explains why he could not attend the event.

3. This is when his boss hinted that he might lose his job if he does not attend the event.

This is just horrible. It is really infuriating and so disappointing to know that the boss stooped so low just to make his employee attend an event. The boss really took advantage of his helplessness by putting his employee’s job a risk. That was totally unnecessary and completely unfair. Someone needs to educate his boss on the topic of employee rights and a healthy workplace environment because he really needs it. His boss is clearly an unfair and arrogant person who uses other person’s weaknesses to get what he wants, which is extremely toxic and inappropriate in my opinion. I do not understand how much important a kart race event that happens every month can be for a company that a boss is willing to fire an employee if he refuses to go, not to mention that the employees have to spend their own dime. Even if it was paid by the company, it still gives no one the right to force someone into doing something they do not want to. That is what we call freedom. Keep on scrolling down to read what happens next…

4.  Someone needs to tell his arrogant boss that assumptions are not always correct. 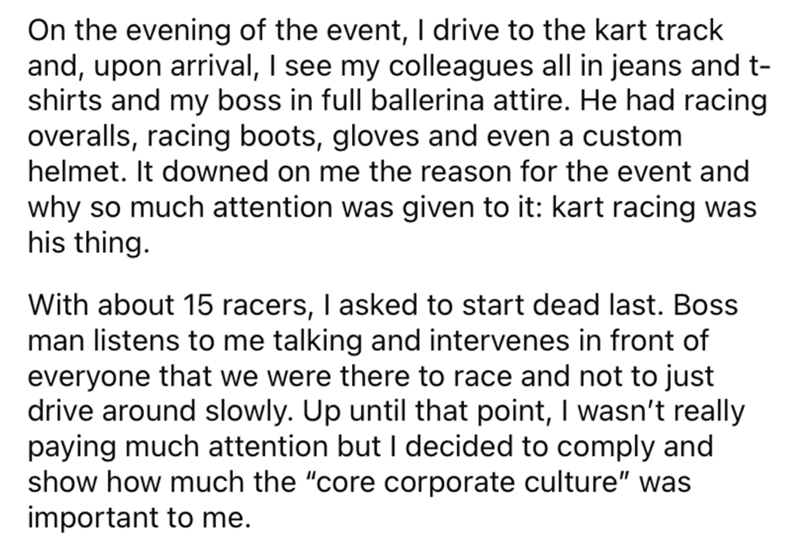 5. This is why you should never judge a book by its cover. That must be so embarrassing for the boss. 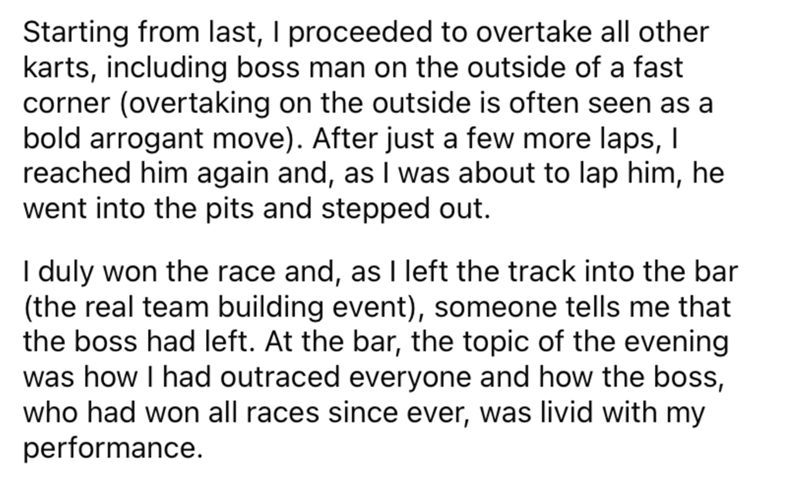 6. What a plot twist! I am sure his boss would even avoid mentioning the event to him ever again. As he should!

This story had an amazing end, I am so happy that the employee really showed him that who is the actual boss here with his amazing racing skills. Have you ever experienced a similar situation at your workplace? Share your story with us in the comments own below…