Greed lessens what is gathered.

A couple signs a prenuptial agreement before they get married, it is a written contract that enlists all of the properties that the two of them own and all of the debts that they have. It actually establishes the rights to property and financial support in case of death or divorce. It is usually signed by the couple before getting married so they can avoid any fights or arguments in the future. A person can protect their important property this way, a person can be more supportive to their spouse within marriage this way and ven after divorce or death. It is good to have a legal contract, it helps in many ways. It is also good for the couple so they can talk this out to avoid any mishaps after marriage, the communication between a couple matters a lot.

Today, we bring you the story of a 32-year-old married woman who faced a very complicated situation one day completely out of the blue when she got into an argument with her husband. She got herself a very expensive car by her own money which resulted in her husband finding out about the amount of her monthly income, that awaken the greedy animal in him and he started demanding her that they should share finances now that he found out that she is earning way more than he is. Even though he was the one who actually forced her to sign a prenup contract in the first place before getting married that says they both agree on not sharing each other’s property or finances because he wanted to protect what was important to him, he was not ready to take any risk. The woman literally laughed in his face when she heard him say that, she was not having it and she made it clear that it was not a problem prior to him finding out about her earning so it should stay that way. She later found out that the man is not only selfish but also extremely greedy for many ridiculous reasons. Keep on scrolling down to read her whole story in her own words…

1. She starts her story by giving us some background details. 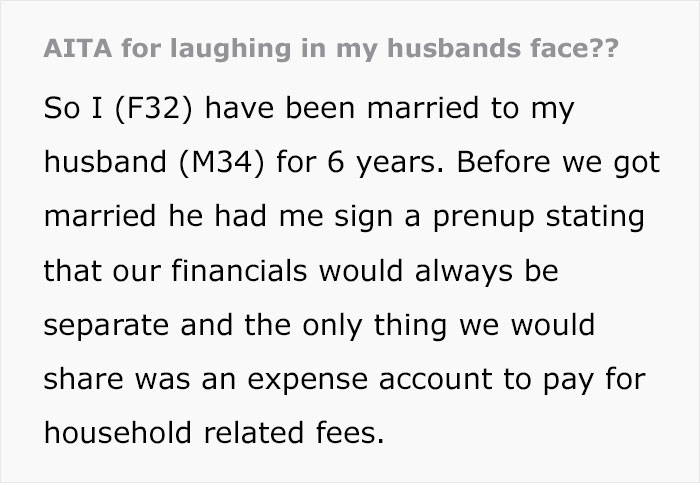 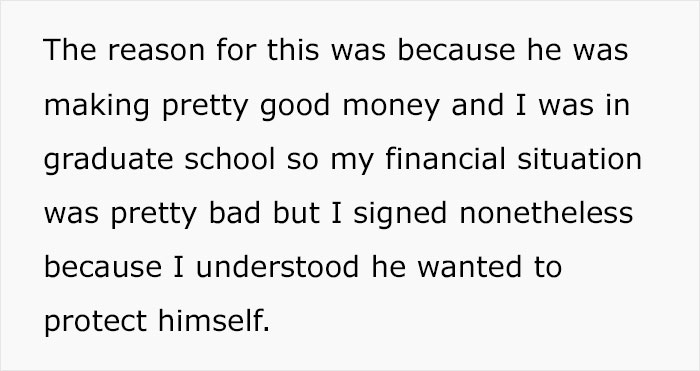 5. This is going smoothly so far. 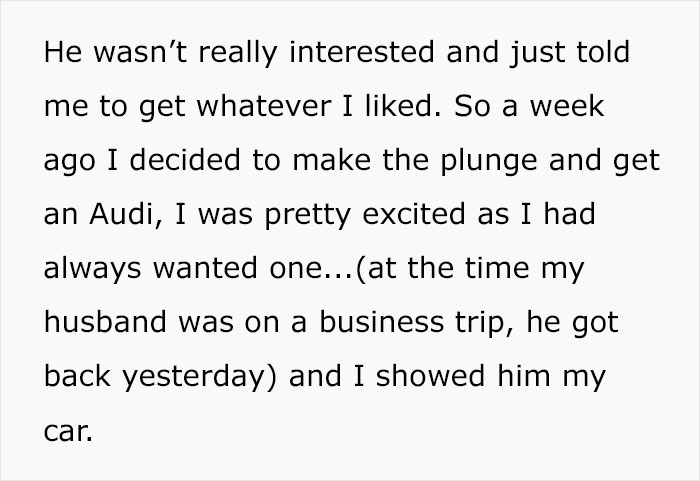 6. It probably made her husband wonder how would she get such an expensive car all by herself.

7. It was definitely a shock to him, he was not expecting that from her. 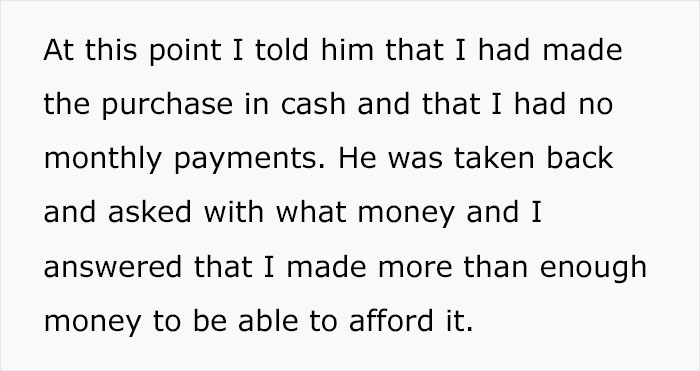 8. And then boom! The flabbergasted husband starts showing his true colors.

9. Should have thought about that six years ago, buddy. Too late for that now.

11. It is very immature of him to bring family into private matters of a married couple. 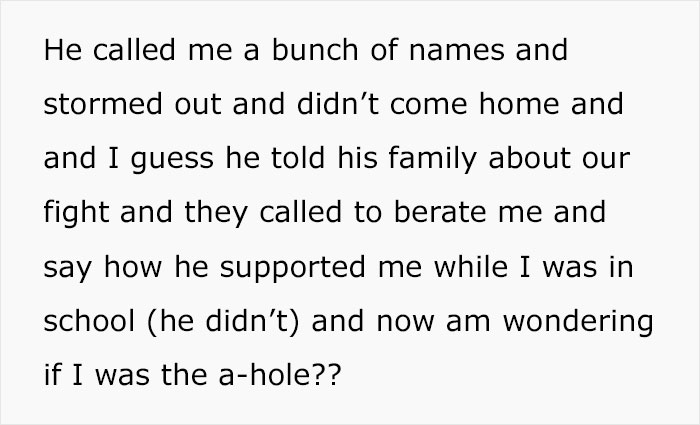 12. Well, you are his wife and it is normal to know each other’s salary. It is not rude in any way. 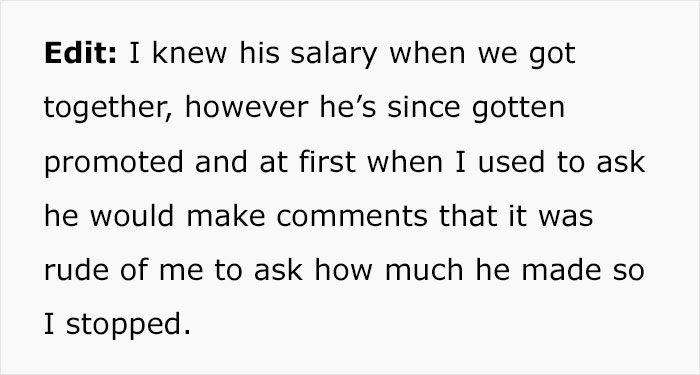 13. So now you are telling us that he never really took any interest in your career until he found out that you earn more than him…? This is ridiculous. 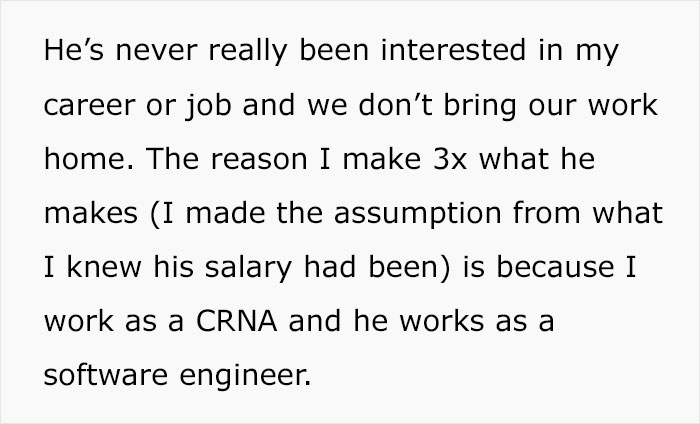 14. It is actually very depressing.

15. She is now realization is hitting her now

16. This is the best thing to do. Communication is always the key. 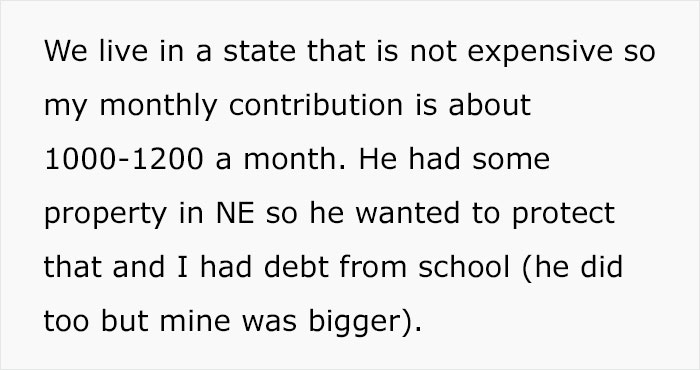 Well, it is clear so far that the husband is saying all of this out of greed and he is probably jealous to know she is making way more money than him. Now, he is drooling at the thought of all that cash, he probably wants to take part in her cash but she can not have the same with his. This is so horrible, how can people put money before love? This guy should be ashamed of himself. There was no need of involving the family in this complicated matter, he should not have called her names and been disrespectful to her. It shows how poorly this man was raised, he is the result of bad parenting and considering the fact that his family is also taking part in insulting his wife for doing absolutely nothing wrong, it definitely shows how toxic everyone is. There is still a possibility that there can be other reasons than just greed to have her share the finances with him, the husband must be hiding something. There must be a reason behind his desperation and greediness. Either way, it gives him no right to act so rudely towards his wife. The woman posted her whole story on Reddit and asked the people there to help her figure out the whole situation, is she the wrong one here or not? Keep on scrolling down to read what happens between the couple when they finally sit down to walk…

20. The change of heart was definitely the biggest red flag.

21.  I would have laughed in my husband’s face too if I was in her place because this definitely sounds like a joke. 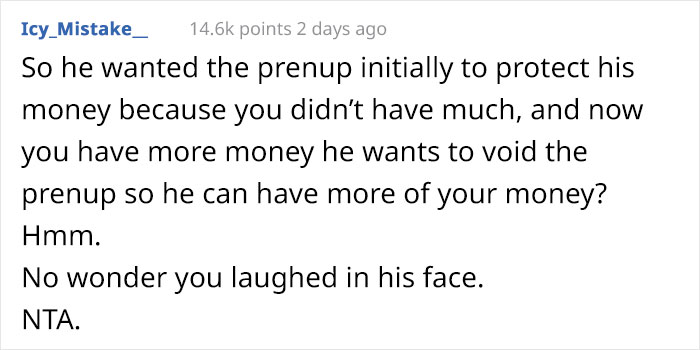 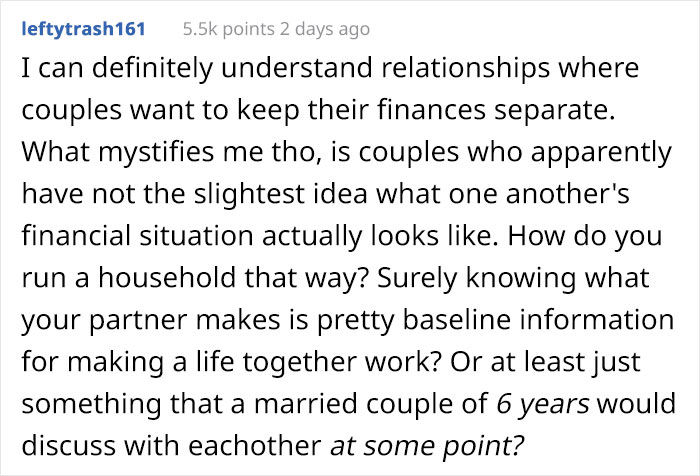 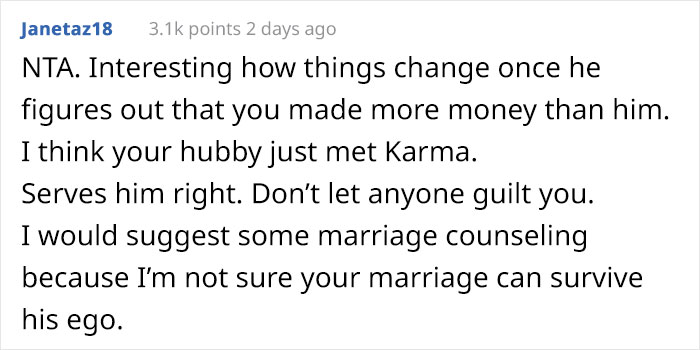 26. These are such big red flags, just take the hint already. 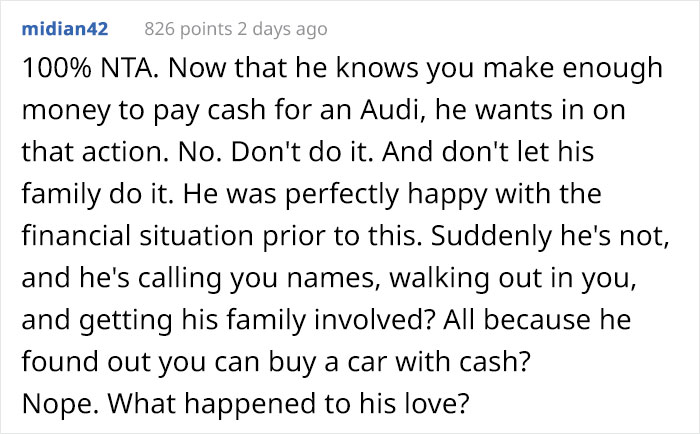 27. She finally tells the rest of the story, what happens when they both finally decide to talk about it. 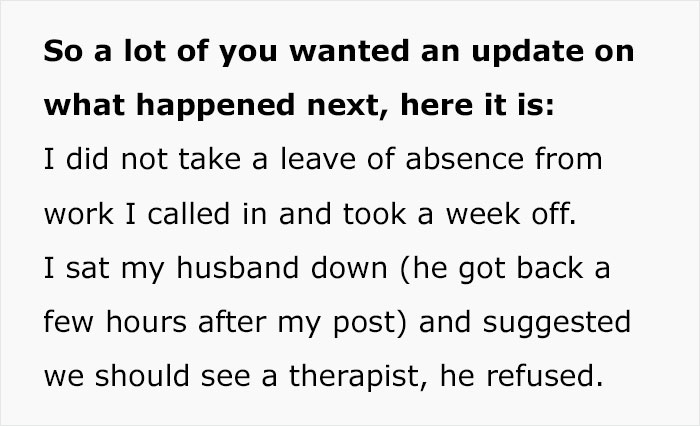 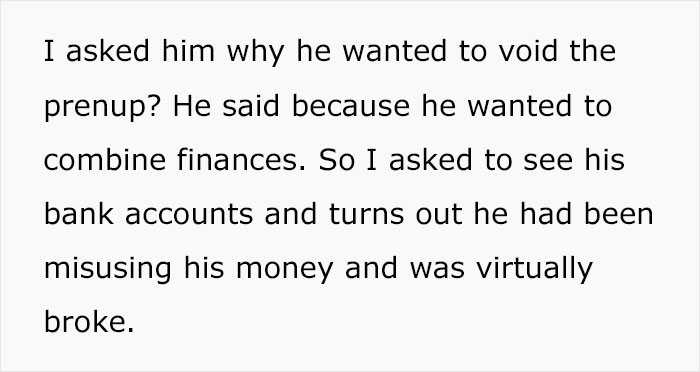 29. Nevermind, he is just extremely careless. It is his own fault that he is broke. 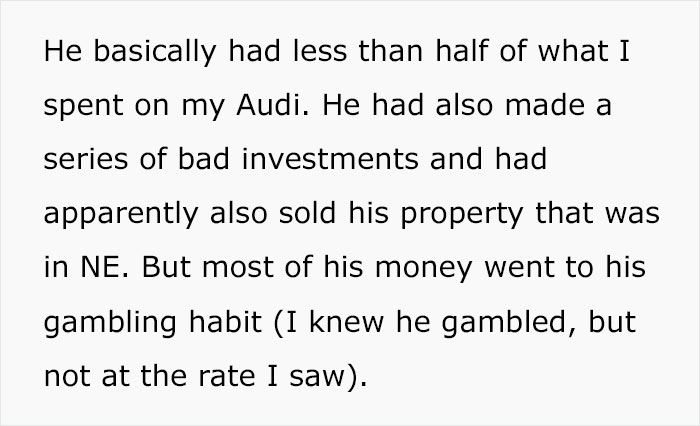 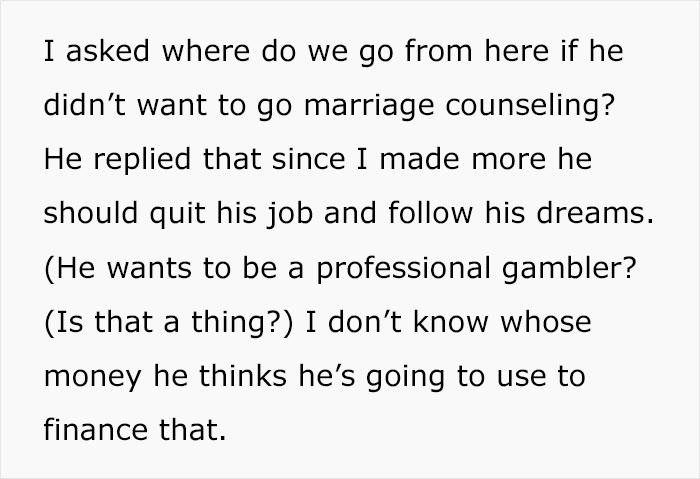 32. This is ridiculous, he is such a disgusting and horrible man. 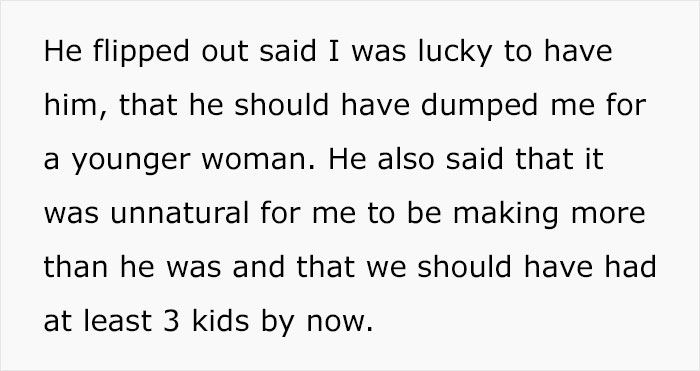 33. You did the right thing, no one should tolerate such disrespect.

35. What a greedy and horrible person he is.

36. You did not overreact, there is no way anyone can spend their life with a person so selfish and careless as him.

Turns out that the man is in fact extremely greedy and there is no other sensible reason for his idiotic actions. This guy literally ruined his marriage of six years for some money that he has no right over to claim, let alone demand. I believe if he was nice and supportive of his wife he could have politely asked for a loan from her that he would promise to return once he gets his life back on track and she would have definitely supported him being the good person that she is. Unfortunately, people ruin their lives with their own hands without even realizing it. He wants everything to be served on a golden platter without working for any of it. What are your opinions on this? Tell us in the comments down below… 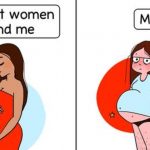 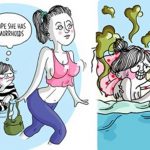 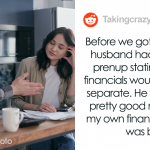 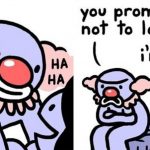 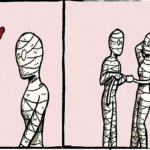