Another day, another workplace drama.

Every other day we get to hear new dramatic workplace stories that completely blow our minds or piss us off. It is really disturbing that an office is a place where people are supposed to get along and work as a team but from the stories we hear, I believe it is a place where people fight the most and cause a scene unnecessarily often, purely out of boredom most of the times. Thanks to the Karens in our nation, they make sure to ruin our days with their unnecessary drama.

We came across a story of an insensitive woman who accused a widower coworker of misleading people into believing he is in a relationship because he still wears his wedding ring, their conversation soon turned into an argument which they all saw it coming. Keep on scrolling down to read the whole story in detail…

1. She starts her story with a few background details.

2. She finally said that he was misleading people by wearing the ring to which the guy replies that he did not even think about it that deeply.

3. She still kept on arguing with him about it.

4. The woman explains her side of the story and asks the readers if she did the right thing or not.

It is really disappointing, some people just do not know how to mind their own business and to keep their mouths shut. First of all, the woman had no right to discuss something so personal and sentimental considering that they are just coworkers and not even friends. It is not her concern whether he wears that ring or not so it should not bother her. Secondly, even if she is speaking technically it still does not seem misleading at all. What could he possibly be misleading them into? To not ask him out on dates? Does not sound harmful to me. In the end, it is his life and his choice. Who knows, the guy might be still grieving over his wife’s death. She must be too dumb to realize that obviously, the ring has some sentimental value to the guy that is clearly why still wears it. Honestly, I think it is very sweet of him for trying to keep his wife’s memory alive by still showing loyalty to her even after her passing away. That woman took it too far, she had no right to argue on the subject that she has no say in. After sharing her side of the story, the woman asks people of Reddit their opinion. Keep on scrolling down to read their comments…

8. It is truly such a horrible thing to say to a person who just lost their loved one. 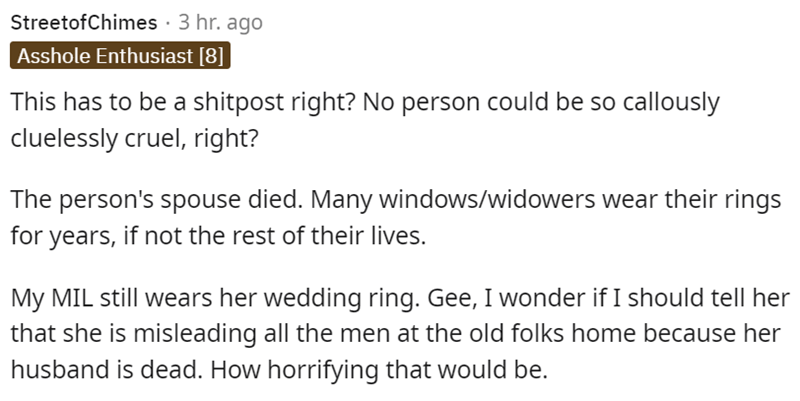 9. I thought the same because there is no other sensible reasoning why a person would get so bothered over it

10. It was honestly very insensitive of her to argue with him on such an emotional topic.

11. He should not talk to her ever again because these are the type of people that bring unnecessary drama and too many headaches in your life.

12. Some people just love to cause a scene.

13. The guy was definitely correct when he said that the woman is being rude.

15. He does not owe anyone any kind of information about his personal life, she should have kept her mouth shut!

I really feel secondhand embarrassment for this woman, she made a fool out of herself and whoever took her side was a fool too. He was not misleading people into something bad so what was the problem anyway? I think schools need to teach students at a young age about how to mind their own business so they do not grow up to become insensitive and rude people like this woman. What is your opinion on this? Have you ever experienced something similar at your workplace? Share your story with us in the comments down below…